Patients who wake up with a stroke may still be eligible for endovascular thrombectomy, according to preliminary results from the DAWN trial.

Presented in the European Stroke Organisation Conference (ESOC17) last month, the principal investigators for the trial said they found an impressive 2-point difference in the 90-day weighted modified Rankin Scale (mRS) score of 48.6% in the thrombectomy group, compared to 13.1% in the control group who received medical treatment alone. This translated in a number needed to treat of 2.8.

However, study thrombectomies were performed using the Trevo device, a product of Stryker Medical who funded the trial, which critics may analyse as a likely conflict of interest.

The aim of the study was to demonstrate superior functional outcomes in patients with a large vessel (specifically, the intracranial ICA and M1 segment of MCA) acute ischaemic stroke at 90 days with thrombectomy and medical management compared to medical management alone, in a select subgroup of patients treated 6-24 hours since they were last seen well.

To understand what the trial was about, here is a PICO: 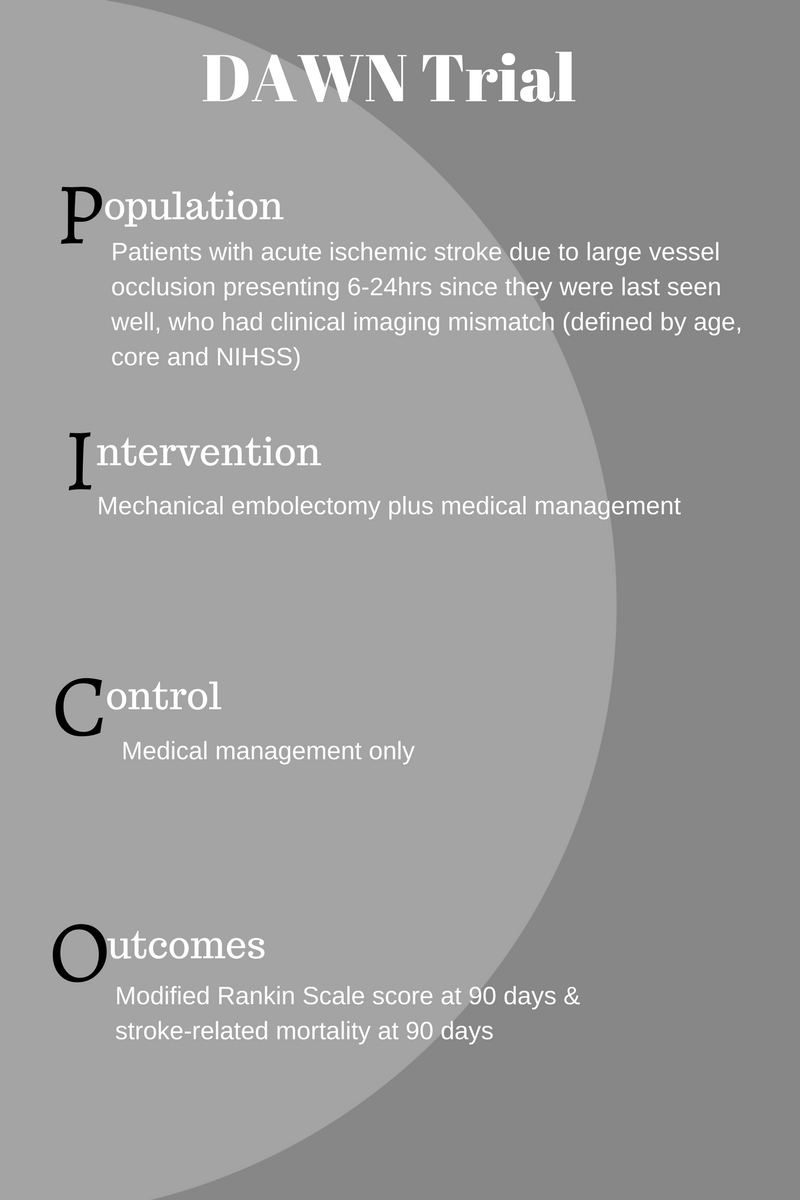 The international trial was stopped prematurely after a planned interim review of 206 recruited patients had shown that the trial’s aims were reached successfully. In their youtube interview at the ESOC17, Tudor Jovin and Raul Nogueira, the principal investigators of DAWN, explained that due to lack of previous data for this population group, they had difficulty with a sample size calculation and therefore had planned interim looks into the data.

You can see them present the results from this prospective, randomized, multicenter, Bayesian adaptive-enrichment, open label trial with blinded endpoint assessment here:

Without actually having access to the trial results which are pending publication, it is difficult to be able to critically appraise them, but they do seem promising. A 73% relative reduction of dependency in activities of daily living and a number needed to treat for any lower disability of 2.0 for those in the thrombectomy group will mean that the intervention is going to have a massive benefit for those people who present late with a large vessel stroke and challenges conceptions that reperfusion outcomes are inversely related to time.

“Time is still obviously very important and the earlier the treatment is given the better the results, but we have shown in this trial that it shouldn’t be the only factor that determines whether we consider endovascular therapy,” Tudor Jovin said.

In their later presentation at LINNC17 this month, Raul Nogueira explained that a physiologic rather than time-based only approach may be the reason behind the study’s results as patients with a Clinical Core Mismatch e.g. significant clinical deficits but limited infarct size may have compensatory mechanisms for ischaemia, like collateral flow.

With regards to safety outcomes, the results remain impressive, with a 4.8% symptomatic haemorrhage rate which the investigators claim is non-significant compared to the control groups and data from previous trials. Stroke related deaths, they claim, is lower in the treatment group too.

What does this mean for me?

At the moment, as an emergency physician not very much. In the near future, for certain stroke patients and the physicians that treat them, it is likely to be life-changing.

It may mean that many stroke patients who present within 24 hours with a large-vessel occlusion will need to be screened for treatment with thrombectomy with CT perfusion or MRI-diffusion-weighted imaging, with the infarct core volume measured by automated software. This will see hospitals having to offer a 24 hour perfusion-imaging service together with a round-the-clock endovascular team.

Experts have estimated that if implemented, this may mean a 2-5% increase in patients eligible for thrombectomy, but how this translates in terms of service provision can be higher or lower depending what this is like in your neck of the woods.

However, with evidence pointing towards  a 73% relative reduction of dependency in activities of daily living (ADLs) and a 35% absolute increase in the number of patients achieving functional independence (mRS score, 0 to 2) in the thrombectomy group, it will be difficult to argue against implementing the new practise.

Speaking to Medscape after the conference Professor of neurology, Andrew Demchuk, said, “Stroke is a very heterogeneous disease and so in order to be successful in treatment we have to classify patients into the correct subtypes who may benefit the most and they did a masterful job of doing that in this trial.”

“Patients with a poor clinical score have had large strokes, but if they have a small core infarct size they tend to have a long time window – – the stroke expands very slowly. By selecting patients this way, they have achieved a large effect size with thrombectomy,” he pointed out.

PREVIOUSHow to Nail Your Consultant Interview
BACK TO POST
NEXTJuly 2017