About 1 year ago, Pam, a 62-year-old, recently retired teacher, fit, well & active, suffered sudden onset of severe ‘ripping’ pain in her chest & upper abdomen. It was around lunchtime & she was fastening her seatbelt to drive to her daughter’s house. The pain eased slightly and she continued with the pain on and off for 2 days, then finally went to her local emergency department.

Pam was admitted under medicine with a differential diagnosis of pulmonary embolism and a chest infection.

She underwent a CT pulmonary angiogram which was reported as normal, but was kept in hospital due to ongoing pain.  She had an echo performed which showed mild to moderate aortic regurgitation and a comment was made in the notes about signs of heart failure. Pam was also told she had some heart failure.

She continued to have ongoing intermittent pain, and the following Monday a repeat echo was performed, although it was also reviewed by a cardiologist on this occasion. It showed moderate aortic regurgitation and a clear flap in the ascending aorta. She then underwent an urgent CT whole aorta which revealed a type A aortic dissection from the aortic root to the abdominal aorta.

On review of the previous images, the dissection was visible on the initial CT PA, and the initial echo was also suspicious of a flap in the aorta.

Pam was immediately referred to cardiothoracic surgery for repair of her aortic dissection. She underwent aortic root and a hemiarch replacement and post-operatively she made a good recovery and was able to be discharged home on day 12.

The longer you take to make the diagnosis, the more likely it is that an Aortic Dissection will kill your patient. So how do you make and confirm the diagnosis in as short a time as possible while allowing the appropriate treatment to be instigated in a prompt manner?

Several factors need to be in place to achieve this:

This diagnostic challenge is increased because the condition can present with a range of symptoms including; chest pain, back pain, epigastric pain, collapse and stroke. Patients presenting with these symptoms are far more likely to have another more common condition, such as MI, PE, stroke etc.

Of the 200 average daily attendances to the ED in Bristol, up to 30 patients will present with  chest pain, and yet aortic dissection is relatively rare, representing 1 in 10000 ED attendances.

So how have we driven this change in culture in Bristol (where some of the authors are from) to ensure all these factors are in place to facilitate accurate and rapid diagnosis? This work started in 2011 when 3 patients in their 40’s who presented to Bristol Royal Infirmary died of missed thoracic dissection, and the subsequent investigation revealed knowledge gaps at all levels.

None of these patients presented with the classic chest pain radiating to the back, demonstrated a difference in pulse pressures in the arm, or had an abnormal chest xray. Instead there were subtle differences in their stories, but AD was not even considered.

Since then, during inductions, we teach every ED doctor who rotates through the department about the range of presentations of AD.  We teach about the common misdiagnosis, and about the pitfalls of assuming that a normal baseline set of bloods and an ECG excludes the condition.

We focus on good history taking:

The commonly held radiological belief is that the patient in whom the diagnosis of AD is being considered should be referred for a chest radiograph, but this is both an unnecessary examination and will add an unnecessary delay to the patient pathway. In many EDs, it can take 1-2 hours to get a chest radiograph, and the immediate mortality rate in AD can be as high a 1% per hour until diagnosis.

The CXR adds very little to the diagnosis and – more importantly – it cannot exclude the diagnosis. Commonly radiologists argue that a CXR will exclude other chest pathology, but so does CT and is not an excuse to delay a CT further. In most cases of dissection the CXR is normal in the presence of dissection in up to 40% of cases (1). Even if it is abnormal, the features of dissection are often very subtle and are not enough in isolation to be certain of the diagnosis, so inevitably the patient will need a subsequent CT scan to confirm any suspicion raised by the CXR. 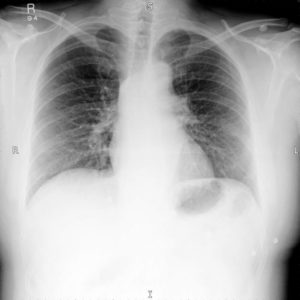 Figure 1. This is the chest radiograph of a middle aged man who was subsequently shown to have an AD on a CT scan. There is some minor unfolding of the aorta, but the diagnosis of dissection cannot be made on this radiograph. 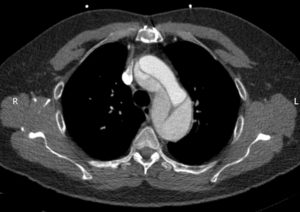 Figure 2. A post-contrast non-gated CT on the thoracic aorta at the level of the aortic arch. The dissection flap and the differential enhancement of the true and false lumen are clearly visualised.

Contrast enhanced CT scanning of the thorax is the examination of choice in confirming the  diagnosis of AD. This test has a sensitivity of 100% and a specificity 98%. Increasing the awareness of the potential diagnosis of AD will inevitably lead to an increase in acute CT of the thorax to exclude the condition, and this requires a close working relationship and understanding between the ED and radiology.

The number of increased scans this causes is surprising as it is than often less than perceived: in 2010 the radiology department in Bristol received 20 requests for CTA, equivalent to 0.3 per week, whereas in 2016 this had increased to 234. This was still only equivalent to 4.5 examinations per week, less than 1 per day. 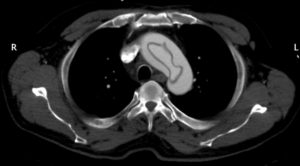 Figure 3. A post-contrast non-gated CT of the thoracic aorta at the level of the aortic arch. There is no differential contrast enhancement of the true and false lumen but the dissection flap is still clearly visualised.

What is important is that the patient has an urgent post-contrast thoracic CT scan, and all acute UK hospitals can provide this facility. A cardiac gated CT scan is ideal, but currently would be impossible to perform in most hospitals.

We know that aortic dissection has an incidence of 2-3/100 000 per year (2,3), and is the commonest cardiac surgical emergency. So whilst it is not common, it is also not rare. Most importantly it often affects young and otherwise fit individuals.

This categorisation is based upon prognosis and therefore subsequent management. 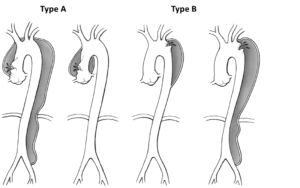 There are many risk factors for aortic dissection (although many patients have none of them). These include hypertension (often undiagnosed), connective tissue disorders (including Marfans, Loeys Dietz, Ehlers Danlos, Turners syndrome), family history of dissection or sudden unexplained death. Other known risks include aneurysm, bicuspid aortic valve, aortitis, coarctation, pregnancy, polycystic kidneys and drugs.

The natural history of unoperated acute type A aortic dissection is poor, with a mortality of 1% per hour for the first 48 hours and over a 50% mortality at 30 days (6).

Anecdotally each cardiac surgeon reports several cases per year of diagnosed type A aortic dissection who do not survive to reach the operating theatre.

I.e. time is of the essence!

For operative planning, the CT scan must include the whole aorta including axillary arteries down to femoral arteries.

Once the diagnosis is made on CT scan, immediate referral to the local cardiac surgical centre should be made. Arrangements should be made for emergency blue light ambulance transfer with a medical escort.

Medical treatment to control pain and hypertension should be instituted, with ideally an arterial line and intravenous labetolol and a urinary catheter inserted. Systolic BP should be 120 maximum (8).

It should be stressed that transfer should not be delayed however, as the only lifesaving treatment available is major aortic surgery.

In the majority of cases the management of type B aortic dissection is initially medical, with blood pressure and pain control being the mainstays of treatment.  In these cases decision making can often be complex and involve multiple specialities.

The programme in Bristol has been largely successful due to the following:

Since 2011, a case of AD is diagnosed every 2 months in Bristol, and there have been no missed presentations to the ED since that time. Can your department match that?

The challenge for the Emergency Physician is in making the diagnosis of acute aortic dissection and in doing so as expediently as possible as the mortality rate is 1-2% per hour.

Chest pain is caused by a spectrum of pathology ranging from the innocent to the extremely serious.