Many of these patients will have their cardiac arrest in the pre-hospital environment, whilst others will present to the emergency department with a deteriorating acute attack.

It is therefore crucial that we get the treatment right for the 138 patients per day that visit our UK emergency departments with an acute exacerbation of asthma – regardless of the severity.

A peri-arrest asthma exacerbation can be a nightmare scenario to manage if you aren’t prepared. There is an, often young, otherwise healthy patient dying in front of you, so knowing the best approach to take is critical.

As a Specialist Paramedic, I think it is important to highlight that prehospital practice mirrors the BTS/SIGN guidelines almost exactly and the severity of the attack will have been classified using the same criteria. As such, a patient suffering from a life-threatening asthma attack will be receiving back-to-back nebulisers of salbutamol and a single dose of 500mcg ipratropium will have been added to one of these. An intravenous dose of 100mg hydrocortisone should also have been given. No surprises so far.

However, the ambulance crew may have given the patient 0.5mg IM adrenaline, which does not feature in the BTS guidelines. This treatment is included in the ambulance guidelines, in part, due to the chance of misdiagnosing anaphylaxis and therefore the chance of inappropriately withholding adrenaline from this cohort. It also represents a relatively safe final treatment option for those patients with failing ventilation, in whom inhaled bronchodilators may be ineffective but who still urgently require bronchodilation. Interestingly, the UK Resuscitation Council suggest that IM adrenaline can be used as a first line drug in asthmatic cardiac arrest if IV access cannot be rapidly gained, stating that the benefit is uncertain but it is unlikely to be harmful.

In those patients who have deteriorated further, into a respiratory or cardiac arrest, the ambulance crew may be utilising in-line nebulisation with a T-piece attached to an airway or directly to the resuscitation bag. However, the practice of using in-line nebulisation with an endotracheal tube was recently removed from the ambulance guidelines due to the theoretically increased risk of a tension pneumothorax (it is postulated that the 6-8L/min of oxygen driving the nebuliser may create a high degree of PEEP which would lead to increased gas trapping in the alveoli, worsening the efficacy of ventilation and reducing venous return through the increased intrathoracic pressure. Add this trapped volume to the positive pressure tidal volume from a BVM and this also increases the chance of barotrauma and subsequent tension pneumothorax).

So, the patient is wheeled into your resus bay with a life-threatening asthma attack despite the best efforts of the prehospital team. Where do you go from here?

The BTS guidelines advocate a single bolus of IV magnesium 1.2-2g over 20mins for all asthma patients who present with a peak expiratory flow of <50% and who have not had a good initial response to nebulised bronchodilators. Our life- threatening case definitely falls into this category. Magnesium is pretty safe to give, with hypotension being the main side effect. You don’t even need to know what the magnesium level is before giving the first dose! Nebulised B2 agonists can be continued, but these are unlikely to be delivered successfully to the target tissues, and therefore intravenous salbutamol should be considered. In some trusts this next step may be replaced with aminophylline. The adult bolus dose of salbutamol is 250mcg IV which can be repeated if necessary, although for a prolonged attack these bolus doses can be replaced with an infusion. If you’’re using high doses of intravenous salbutamol it’s worth considering monitoring the serum lactate and potassium levels. Dilulting salbutamol can be tricky – there’s a great checklist from Brighton here.

Some patients will respond well to these additional interventions, but for others a continued deterioration into cardiac arrest may be the unfortunate trajectory. 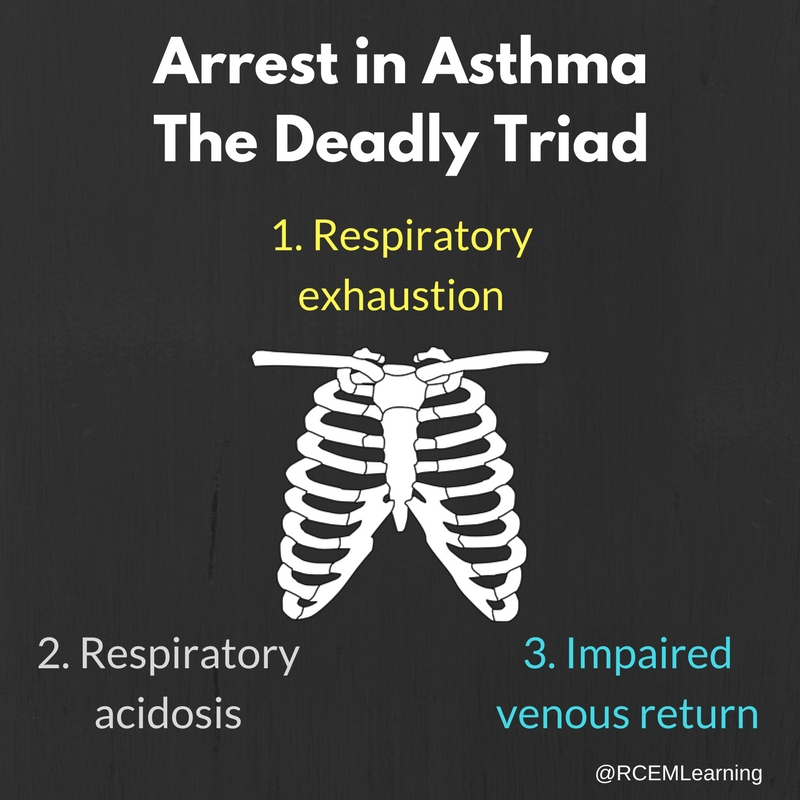 Cardiac arrest is ultimately the result of prolonged respiratory exhaustion, respiratory acidosis and impaired venous return due to the increased intrathoracic pressure.

As soon as cardiac arrest is identified Advanced Life Support should be initiated as normal but, as the resuscitation attempt gets established, there a few adaptions that may be required.

Firstly, due to the high inflation pressures, this is one group of patients that should definitely be managed with a tracheal tube. Depending on the supraglottic device used these begin to leak at pressures around 20-30cmH2O and in an asthmatic patient, pressures exceeding this are not uncommon. Using a supraglottic device may therefore result in hypoventilation of a patient who is already critically hypoxic and hypercapnic. These increased inflation pressures are also higher than that of the lower oesophageal sphincter, increasing the chance of gastric inflation, regurgitation and aspiration, unless the airway is secured with an ETT.

With the airway secured attention should turn to an appropriate ventilation strategy. The respiratory rate advocated by the European Resuscitation Council is only slightly lower than normal, at 8-10 breaths per minute, with a tidal volume just enough to cause normal chest rise.

The reason for this is due to the potential for dynamic hyperinflation. This occurs when the expiratory time is not sufficient to allow complete exhalation. This results in a gradual increase in the residual volume in the alveoli, to the point at which the inspiratory reserve volume becomes minimal and further ventilation almost impossible.

This auto-PEEP, as well as affecting ventilation, also causes a significant rise in intrathoracic pressure, impeding venous return and reducing the efficacy of chest compressions. 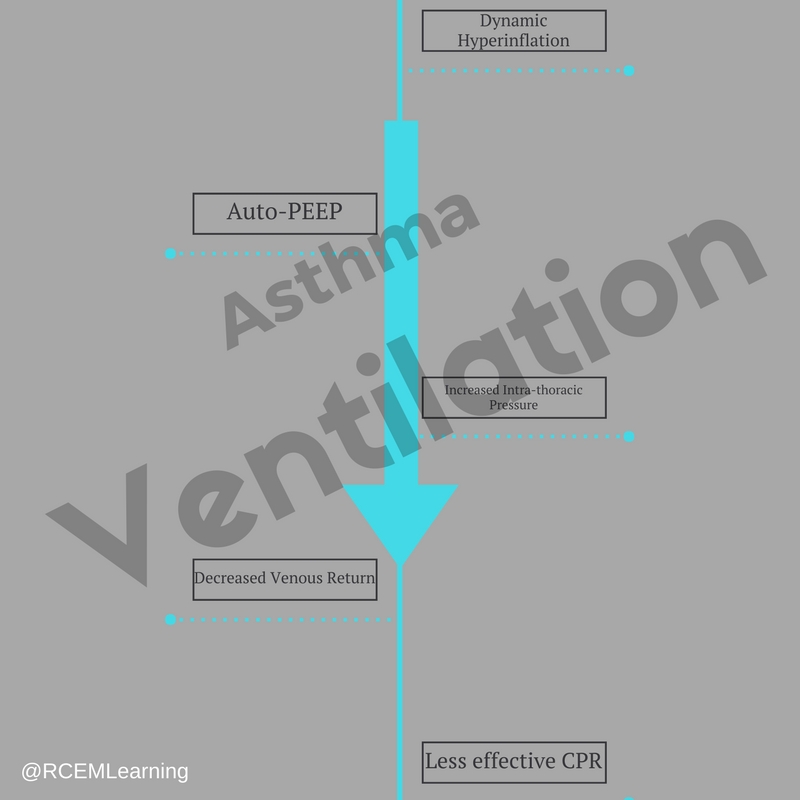 Dynamic hyperinflation may be identified through an increasing resistance to ventilation, poor excursions of the chest wall and potentially a hyper-inflated appearance to the chest.

Correction of the condition can be achieved by disconnecting the ETT and applying manual pressure to the patients’ chest. Air being forced out of the lungs may well be heard escaping from the ETT. If dynamic hyperinflation was the cause of difficult ventilation, an immediate improvement will be felt on reconnecting the BVM. This manual deflation technique may have to be repeated throughout the resuscitation attempt if the condition redevelops.

An alternative cause of difficult ventilation is tension pneumothorax. If manual deflation of the lungs does not result in a reduction in the airway pressures, then tension pneumothorax should immediately be considered. A tension pneumothorax can be very difficult to identify in cardiac arrest but in asthmatic patients a low index of suspicion should be maintained, particularly if signs such as subcutaneous emphysema are noted. Decompression should be completed with a thoracostomy rather than needle decompression as multiple studies have highlighted concerns that a standard 14G cannula will not have an adequate length to penetrate the thoracic wall, as well as having a number of other limitations. It should be remembered that decompression may be required bilaterally, but a quick review of the patient should be carried out after the first thoracostomy to ensure a second invasive procedure is not carried out unnecessarily.

Dehydration can often be a finding in these patients’ due to the increased insensible losses associated with prolonged tachypnoea and mouth breathing. In the cardiac arrest setting this dehydration can have a couple of detrimental effects. Firstly, any degree of dehydration and reduction in intravascular volume is going to compromise effective chest compressions, particularly when found in conjunction with dynamic hyperinflation. Second, it is hypothesised that the mucus being secreted into the airways becomes thicker and therefore more likely to plug the respiratory bronchioles and small airways. This can worsen the, already significant, V:Q mismatch as well as contributing to dynamic hyperinflation. As a result, IV fluid during an asthmatic arrest may provide some benefit to these patients.

Finally, with the current equipoise surrounding the use of adrenaline during cardiac arrest, it’s worth highlighting that this is one group of patients in which it may have positive effects. A regular and large dose of a non-selective, B2 agonist definitely has sound, theoretical, physiological benefits. 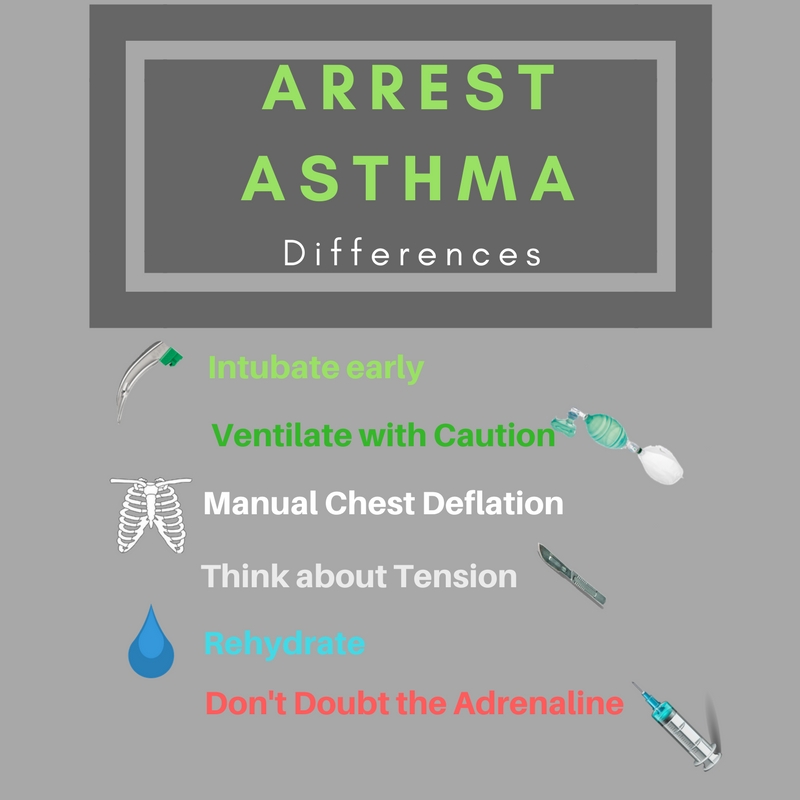 So, in summary, take a breath! Secure the airway with an endotracheal tube and watch for changes in the compliance of the BVM. Manually deflate the chest if there is resistance to ventilation and if there’s no improvement after, then decompress the chest. Get the IV fluid running and push the adrenaline early and often.

James Yates is a Specialist Paramedic (Critical Care) with the Great Western Air Ambulance based in Bristol. In his prehospital career to date, James has worked nationally and internationally in a range of clinical and educational roles. He has an interest in education and simulation.

PREVIOUSSocial Media: The Good, The Bad, The Ugly
BACK TO POST
NEXTNovember 2017