Cardiac arrest in pregnancy is a potential presentation to the emergency department. If it happens, you are likely to be cognitively overloaded. We’ve talked through what you need to do, then shared a checklist that lists what you need to do, in the order you need to do it. We’ve supported our blog with some awesome pictures by Sarah Payne and Jonathan Hurley, reincarnated from a previous RCEMLearning blog. In real life, it is hoped many of these actions will happen simultaneously. But for it to work, you need to read it, and mentally rehearse it before you need it for real, as well as seeing what happens in your hospital.

This process is normally called a “peri-mortem c-section”, but more recently the name has changed to resuscitative hysterostomy. 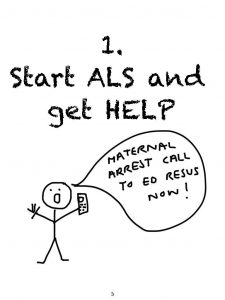 This is mandatory, even if you’re in the ED. You’re going to need a lot of hands…now…and this is the quickest way to get them.
At our hospital, a maternal cardiac arrest bleep goes to the whole obstetric team, the midwife coordinator, the obstetric anaesthetist, the neonatal team and the medics, ensuring you are likely to get an obstetric member of the team to do the peri-mortem c-section and the neonatal team for the neonatal resus. If any of the team e.g neonates in a postnatal woman are not required they can always leave.
Consider putting out an early major haemorrhage or code red call for some quick blood. Remember physiological signs of bleeding may not be present, and the physical presence of bleeding may not be evident – it may be concealed.
If you’re not the Consultant, consider calling them – If it’s the middle of the night don’t wait for them – but they’d probably like to know and might need to provide some support to you and the team afterwards. 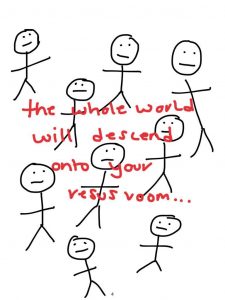 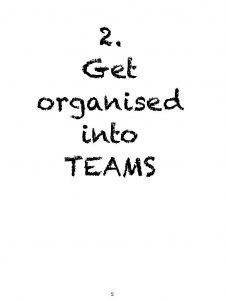 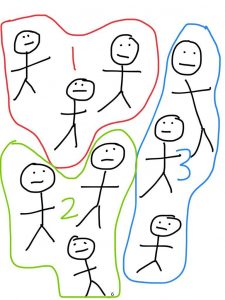 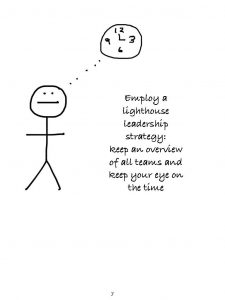 Delivering advanced life support is going to be one of the initial components. There’s no changes to the algorithm. Give the drugs. Give the shocks. You’ll need to allocate a team leader – who is unlikely to be you, as if you’re reading this, you’re likely to be busy doing the c- section. The team leader doesn’t have have to be a doctor – it could be the paramedics who bring the patient in, an ALS trained Nurse, resus officer etc. In my department I would allocate an ACP if they were there.

Modifications to ALS for Pregnancy
Reduced venous return due to aortal compression from the fetus is not a cause of cardiac arrest, but won’t help any resuscitation efforts, so it is worth reducing its effects. This can be minimised by uterine displacement – pulling the uterus is considered better than pushing it. A left lateral tilt is no longer considered appropriate in cardiac arrest – as then chest compressions aren’t effective. If the patient is peri-arrest, rather than in cardiac arrest, tilt the patient 15 degrees towards their left – a wedge or blanket will be needed. 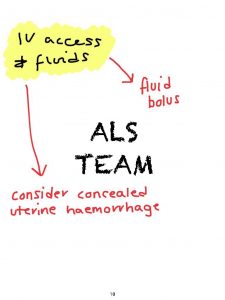 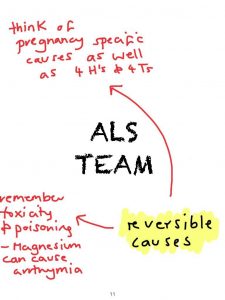 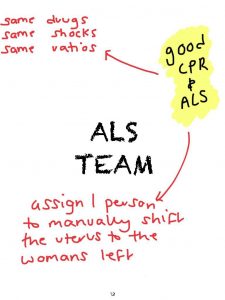 * Early intubation (preferably NOT with an LMA because risk of aspiration is much higher in pregnant patients). There is some narrowing of the airway in pregnancy, so you may need a slightly smaller tube. 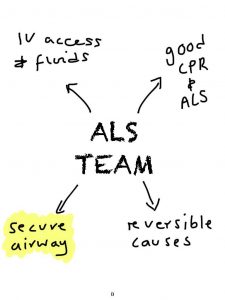 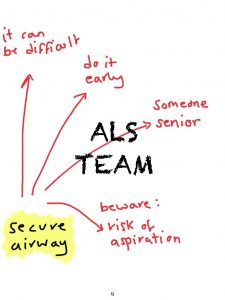 * Slightly higher chest compressions – this is only one space higher – you don’t want to end up with clavicular compressions!

In hypothermia, everyone knows “you’re not dead until you’re warm & dead.”

In pregnancy, should the saying be “you’re not dead until you’re post-partum & dead”?

This is applicable for patients more than 20 weeks (or suspected) gestation in cardiac arrest only – any earlier than that and the fetus is unlikely to a) survive and b) have significant effects on the maternal circulation. If you think they are very pregnant, but don’t have any confirmation, decide what you think is most appropriate. You’ll be more likely to be cross with yourself for not doing it, than for doing it. The sooner the better. There’s no maximum duration of down time now – if it’s been 4 minutes or more with CPR, get the c-section done. If the patient isn’t in cardiac arrest, but is just very poorly, get an obstetrician to help you ASAP.

Find the equipment – in our cupboard it’s in a box in the resus cupboard. Where is it in yours? In reality, all you really need is a scalpel, and preferably some clamps. 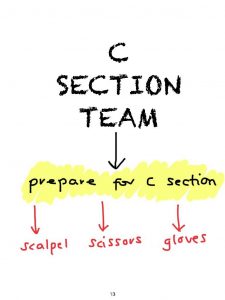 Perform C-section
This you tube video is well worth watching. It summarises everything we’re going to say or have said. 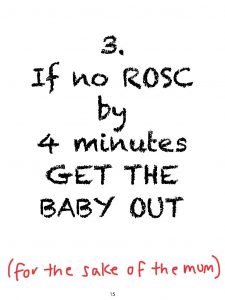 You don’t have time for a gown/ hat/ mask or to wash your hands surgically – but gloves and an apron will be very useful. Clean the skin then incise from the umbilicus to the pubic bone vertically. If you’re used to doing horizontal (or pfannensteil) incisions, go for it. Try to avoid the urinary bladder which is close to the lower segment of the uterus. The bladder will probably be full, but don’t waste time with a catheter. You might need some swabs to help you grip, and to control any bleeding – count them in if possible. Those nice big surgical swabs will be easiest – but if you can’t find them, any sterile swabs will do.

After your incision, you should be able to spot the uterus, and deliver the fetus. Exposing, or delivering, the uterus is only done where there is bleeding from the broad ligament and in an arrest situation there shouldn’t be much bleeding – if there is you would definitely need an obstetric consultant to assist.

After the baby has been delivered, don’t forget the placenta! If the placenta won’t come out easily, leave it in situ and wait for obstetric assistance- it may be a placenta acreta, and pulling it out will make things worse! 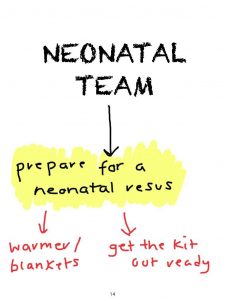 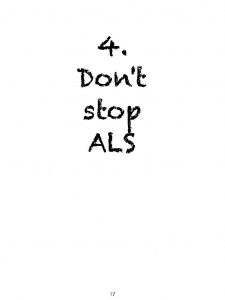 Correct Further Reversible Causes
Thromboembolism is the leading causes of death in pregnant women, and there is a reluctance to give thrombolysis. Case report numbers are small – but thrombolysis if indicated, should be given, even after a peri-mortem c-section. Have a look at the MBRRAC report where they clearly state “Neither pregnancy, caesarean section delivery or the immediate postpartum state are absolute
contraindications to thrombolysis”. Massive bleeding may result – but there are case reports of good outcomes. 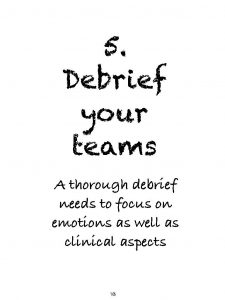 We don’t do this very often, so you’re almost certainly going to need to organise a debrief. In the business of the event it’s easily forgotten – don’t forget. It can be useful to think about what you’re going to say before you’re suddenly leading a debrief. Maybe:

“Thank you for attending this hot debrief. Thank you all for the work you’ve done.
– Was there anything you felt we did particularly well as a team? Clinical care, team work, communication, leadership, other
– Was there anything you thought we could improve on?
– Do you have any concerns?
I think a cold debrief is needed. Please write your email details on this sheet of paper, and we will be in touch to arrange a hot debrief.” 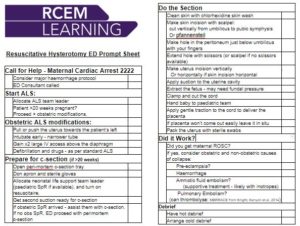 Here’s a summary checklist – why not print it out, and stick it on top of your department’s emergency c-section kit, and then run a simulated peri-mortem c-section? If you prefer more pictures, there’s another checklist here. There’s a case written for you already! And if you’re feeling ready for a challenge, log in and take our SAQ on cardiac arrest in pregnancy!

There is also a handy twitter thread, with a link to a useful video from SMACC here.

PREVIOUSJanuary 2019
BACK TO POST
NEXTTo tube or not to tube? That is the question. The AIRWAYS-2 TRIAL