Children with noisy or difficult breathing often present to the Emergency Department (ED). The acuity of these patients varies, but any of the conditions that cause respiratory symptoms can be life threatening. This article will give key information about each presentation and condition, while signposting further information that you can read for more in depth learning.

Children with cough and fever are one of the most common presentations to the ED. The vast majority of these children do not have pneumonia. Clinical examination of children’s chests can be challenging because they may not cooperate and because transmitted sounds are very commonly heard in URTI. Thankfully, assessment of children is something that can be done more easily and often more safely from a distance. The appearance, behaviour and work of breathing of a child are all good discriminators between URTI and LRTI.

Most children with LRTI can be discharged from the ED with oral antibiotics and careful safety netting. 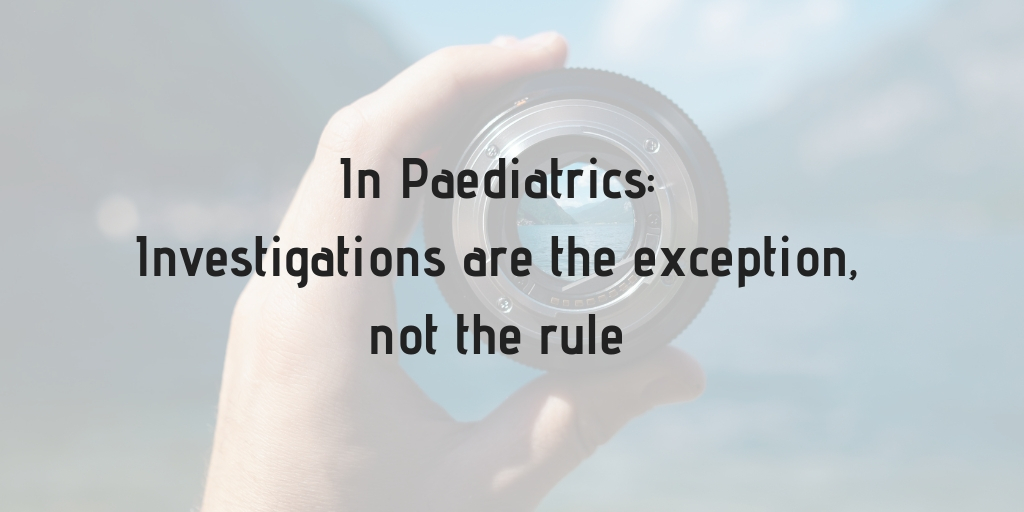 You should have local guidelines for when to refer children with LRTI. Usually they include the following criteria:

The management of URTI is paradoxically often more complex. Children with sore throats, sore ears, runny noses or red eyes usually have a viral illness. The harsh reality is that even when tonsils are red or have exudate and when eardrums are red and bulging, the likelihood that antibiotics will help is very low. Even using a scoring system fails to give good odds. When you take into account the side effects that antibiotics cause to children, it is no surprise that NICE recommend a “no antibiotic or delayed antibiotic prescribing strategy.”

The most important aspects of managing URTI (including tonsillitis and otitis media) in children who present to the ED are:

The evidence is against antibiotics being effective to reduce symptoms or complications so they should be prescribed mainly for prolonged or otherwise atypical cases of URTI in children.3

Now that we have dealt with respiratory infection, let’s cover wheeze. The vast majority of paediatric wheeze is caused by one of three things, bronchiolitis, viral wheeze or asthma. These three things tend to have recognisable patterns and tend to present at different ages. It can sometimes be difficult to tell the difference between them but most of the time it is possible. Getting the diagnosis right is important because each is managed differently.

Think of bronchiolitis as wet lungs. This cause of wheeze is usually seen under the age of 12 months. Typically, there is a slow gradual progression of cough, wheeze, feeding difficulty and then increased work of breathing over about 3-5 days. Symptoms often then plateau for a few more days and then finally begin to resolve. Many, many studies have looked for effective treatments for bronchiolitis and all have found that there are none. Nothing works apart from respiratory support and feeding support where needed. This means no inhaler, no steroids, no antibiotics and no nebulisers.

For infants presenting to the ED, the most important aspects of assessing bronchiolitis are:

Like all things in life and clinical practice, bronchiolitis comes in three sizes. The severity of the presentation will determine how the child is managed: 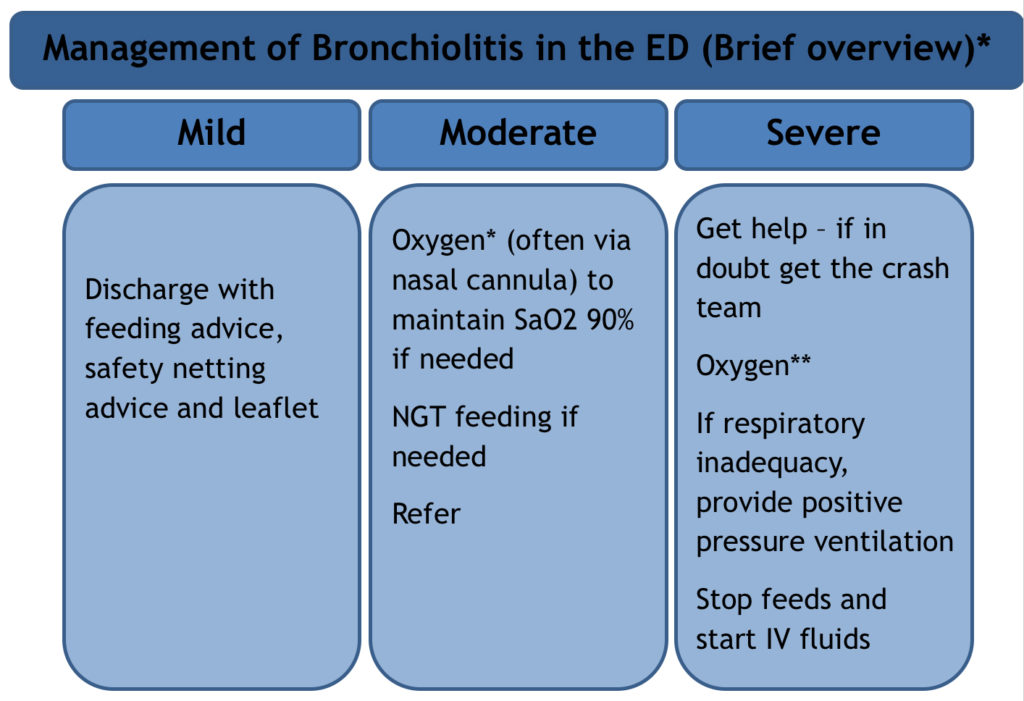 Mild and moderate cases do not require chest X-ray or blood tests. The decision to admit or discharge is clinical.4 Chest X-rays often show a few streaks of white or a patch of uncertain significance which may lead to the prescription of unhelpful antibiotics.

*Your department will have a guideline which you should use. This is provided to give you an at-a-glance understanding of how things should go.
**There has been a recent increase in the number of centres using high flow nasal cannula oxygen as a treatment for moderate to severe bronchiolitis. There seems to be a measurable effect5 of this therapy in babies who are heading towards respiratory failure however it is not a substitute for assisted ventilation in those babies who have already properly failed.

A 6 week old baby presents with coryza, wheeze, poor feeding and increased work of breathing. While the obvious diagnosis should be bronchiolitis, this baby is excessively tachycardic (190 bpm) and has an unusually long prodrome for their symptoms, which started 7 days ago and are still getting worse. This is a case of cardiac failure, most likely due to a large ventricular septal defect. Other clues that might give the game away are a large liver and the presence of a murmur. It’s not easy to hear a murmur at 190bpm but early recognition of heart failure facilitates early treatment.

There is inevitably some overlap, mostly in the children aged between 9 and 15 months. In this age bracket it is particularly worthwhile to pay attention to the history of the onset of symptoms, which tends to be days in bronchiolitis and hours in viral wheeze. 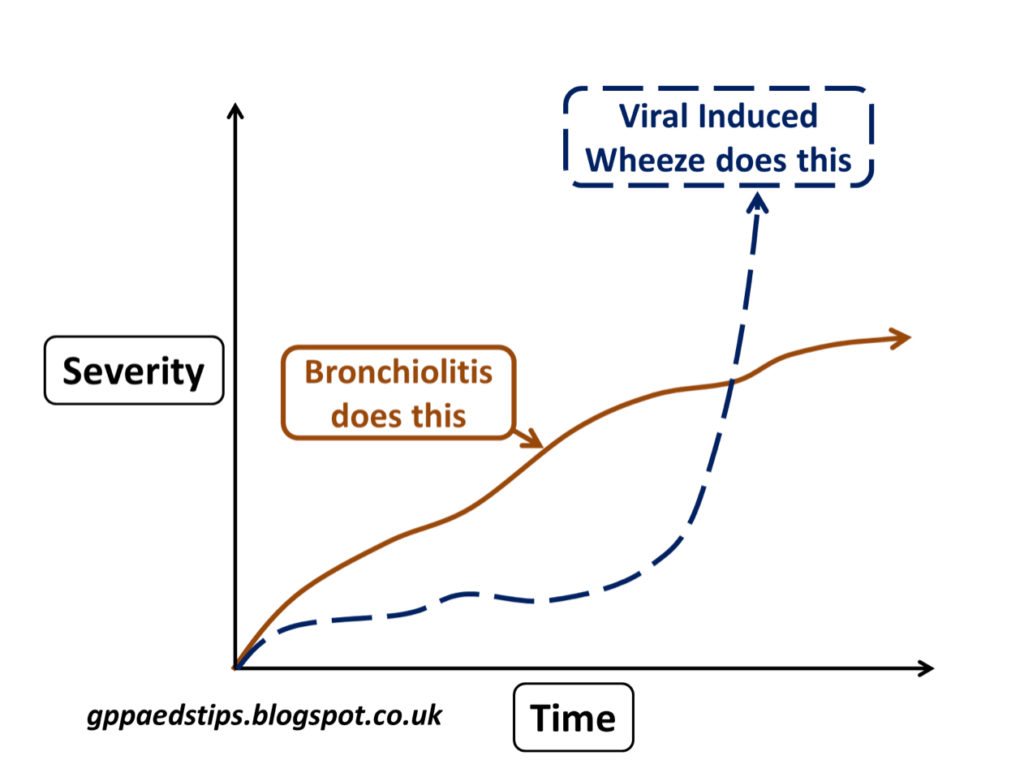 Telling the difference is important, because although a trial of inhalers is another way of discriminating between the two, giving inhalers to infants with bronchiolitis will potentially tire them out. It is all too easy to fall into the trap of trying inhalers for all wheezy babies. The trouble with that is that there is a potential for you to be misled into believing that the bronchodilator has worked. If a trial of inhalers is undertaken in an under 12 month old, the child should be reviewed shortly afterwards looking for strong evidence of benefit.

The treatment of a viral wheeze is all about one thing: β-agonists. How that is done depends on the severity of the presentation.

*Your department will have a guideline which you should use. This is provided to give you an at-a-glance understanding of how things should go.

Inhaler via spacer is preferable to nebuliser in all situations other than the hypoxic child. 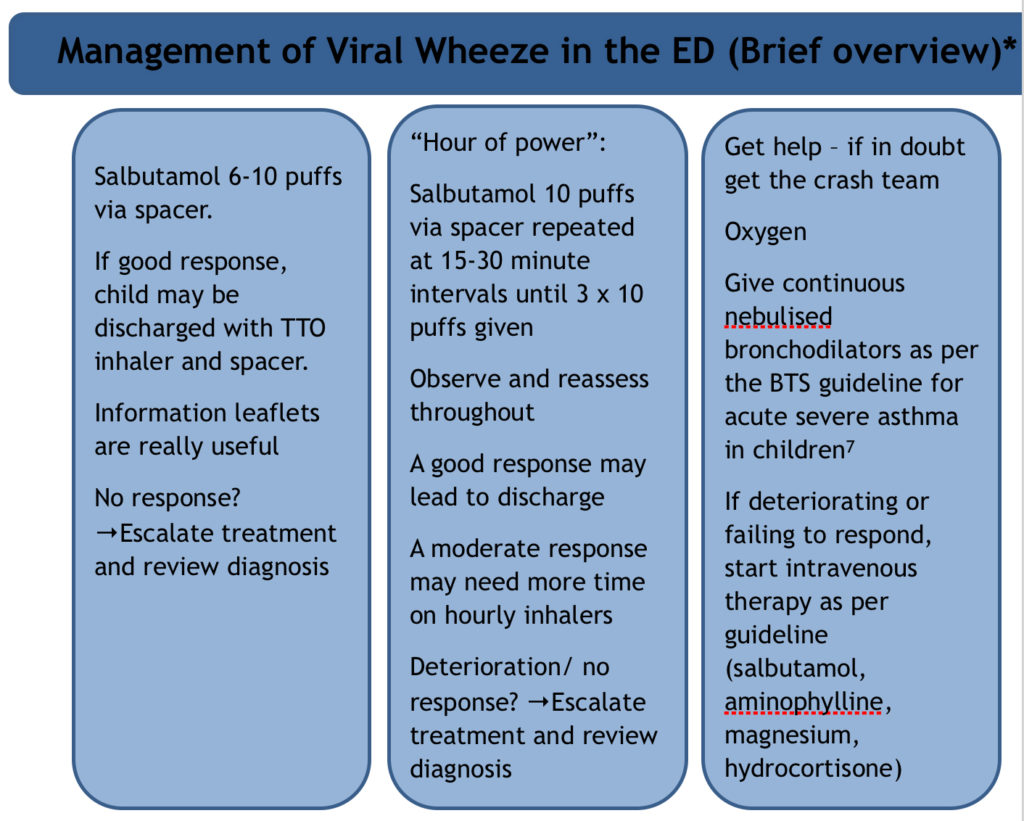 Chest X-ray is not usually helpful and should be avoided unless it is a severe episode or there is a specific indication.

Steroids are given for severe episodes but otherwise are not routinely used as the evidence does not support this practice.

A 3 year old presents with increased work of breathing and a coryzal illness. They have a history of viral wheeze episodes but on auscultation there is no wheeze, and there is air entry throughout.

Odds are, this is still a case of viral wheeze. Although other diagnoses should be considered, one thing that you can try here is 10 puffs of salbutamol. If you are right, a wheeze might well appear as the bronchospasm improves slightly allowing a different musical note.

Asthma in children should be treated as per BTS guidelines7. The important things to recognise are:

In most cases of failure to respond to treatment, what is needed is more treatment.

Perplexing Cases – 3: A 2 year old with a cough for 2 months

A 2 year old presents with a cough that has gone on for two months. They had a particularly bad URTI at the beginning of the cough – so bad that the child was vomiting after they coughed. Now that the cough has continued the parents think that their child might have asthma.

Prolonged cough without wheeze is rarely asthma and in a two year old the odds are massively against it. Post infective cough can take a long time to resolve and this case sounds like it could have been pertussis, which can lead to months of coughing. Very important: If a child has a daily (very important distinction from a cough that comes and goes) cough for 8 weeks, they should be referred for an outpatient assessment. Earlier referral through a more urgent route is indicated if there are red flags such as weight loss, haemoptysis or contact with TB.

Croup and other similar problems

The vast majority of children presenting with upper airways noises have croup. If a child goes from having a runny nose to having a barking cough, the diagnosis doesn’t need too much thought – it’s going to be croup. While there are differential diagnoses for stridor, these alternatives usually stand out. If there has been a choking episode, then foreign body needs to be the presumed diagnosis. If the child is more unwell than expected for an uncomplicated viral infection, you should suspect epiglottitis, bacterial tracheitis or diphtheria.
Croup management depends on the severity of the episode. This is often categorised using the Westley croup score8.
* Your department will have a guideline which you should use. This is provided to give you an at-a-glance understanding of how things should go.

RCEMLearning has a blog on croup here.

A four week old baby presents because their parents have noticed noisy breathing, especially after feeds and when lying down. They are well, thriving and examine normally. The parents show you a video of the infant asleep and you can hear an inspiratory noise that sounds like a squeaky toy.  This is very likely to be laryngomalacia – a floppy larynx. The problem usually starts in the first few days after birth and may be exacerbated by reflux. In the majority of cases the problem resolves by itself as the child gets older. However, most ENT specialists recommend that all cases should be assessed by them in outpatients to exclude rarer causes of stridor in babies, such as haemangiomas and tracheal stenosis.

Respiratory tract problems are the most common paediatric presentation to the ED. Hopefully, this gives you a good overview and understanding of what you’re looking for and how to treat each condition. Here is a really basic and oversimplified summary of how to recognise the difference between them all: 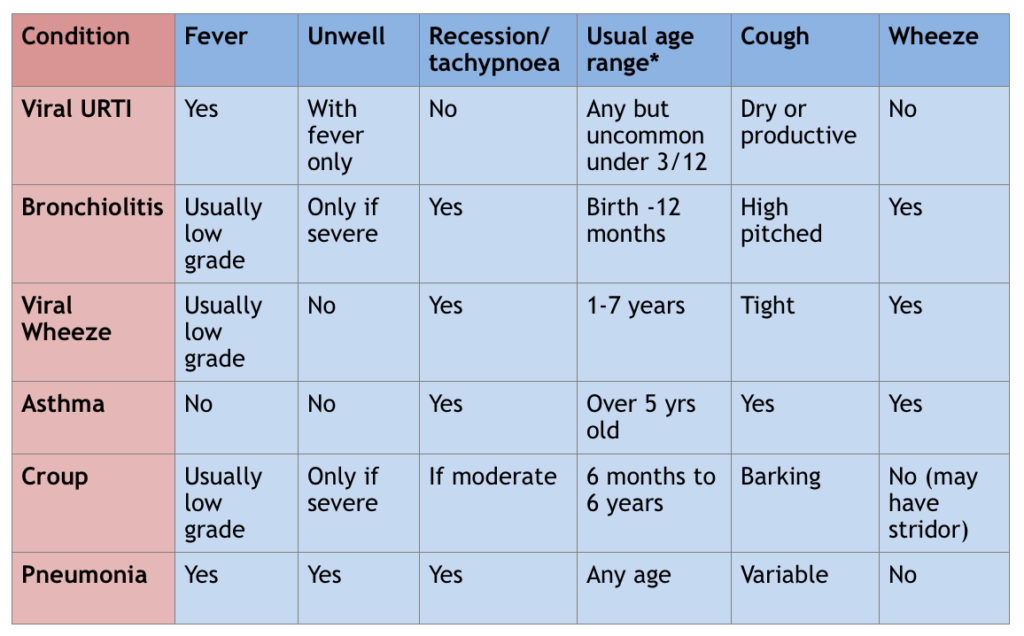 *These conditions will also be seen outside of these age ranges, much less commonly.

And here are the key differences in evidence based treatment:

And if you’re not sure, there’s a great audiovisual guide to Winter Wheezes here.

Edward Snelson, Consultant in Paediatric emergency Medicine at Sheffield Children’s Hospital.
Massive thanks to Caroline Worsley for checking this through and adding the perspective of a trainee in Emergency Medicine.

Edward runs the site gppaedstips.blogspot.com (which is not just for GPs), is an excellent PEM physician and one to follow on twitter.

Preparing for a Bronchiolitis Epidemic

Many accused hospitals and medics of not acting quickly enough to prepare for Covid19, and we're not going to let that happen for the muted bronchiolitis epidemic. Using all we've learnt from Covid, and all we know about childhood respiratory illnesses, here are a few suggestions to help you prepare.