You put an adult trauma call out and start preparing for the patient.

You feel a bit like you have taken the blow yourself, but preparation is key, so get ready.

My advice is to get your difficult airway trolley into the resus bay.

OK, your trauma team is present and the patient is wheeled in. If he is awake and you are not concerned over a cervical spine injury, sit him upright and forward to allow for postural drainage of the torrential blood flow. Keep him like that until the induction drugs go in, then lie him flat.

What if you are concerned about his C-spine? He comes in supine, with three point immobilisation of his cervical spine. There is a lot of blood.  His airway is obstructing.

What can you do?…. Can or should you sit him upright and risk worsening any potential C-spine injury?

If you don’t do something his airway will obstruct.

Take the blocks and tape off and turn him to a left lateral position. This still maintains some immobilisation and also allows for drainage of blood. Get two suction units and remove the rigid yankeur from the end and just use the tubing itself to control the bleeding if it is torrential.

How can you diagnose, by examination only, if the patient has a Le Fort fracture and which one he has?

Stand on the patient’s right hand side. Place your left hand on his forehead to stabilise it. With your right hand, hold the upper teeth and anterior maxilla and gently rock the hard palate.

Radiopaedia have an excellent blog on the different classifications with great 3D pictures which I really suggest you read.

In all cases, you can help stop the bleeding by also grabbing the upper incisors and pulling the mid face forward as a temporising measure to disimpact the maxilla.

Back to the case in question: you have now you have diagnosed the patient with a Le Fort III and it is continuing to bleed…..

You need to secure the airway. When I was an ED registrar, chaotic scenes like this, often led to chaotic intubations. I have since learnt a valuable lesson (thanks to a paramedic friend of mine):

Those few words have saved me so many times. Take 10 seconds to gather your team and explain what is about to happen. It will save you 10 minutes of messing around later! Your job is to bring order to chaos! For instance in this situation you could:

The options I can think of are:

LIFTL has a great post on the pros and cons of each.

Lets say the patient is hypotensive and becoming more unconscious, you’ve put out a code red and are pre-loading him with blood. I would use a reduced dose of fentanyl (1mcg/kg) with ketamine (1-2mg/kg- as it gives sedation and preserves the respiratory drive) and rocuronium (1.5mg/kg). I appreciate there may be some arguments about that. I’m not a fan of propofol especially in the unstable trauma patient!

Phew! It all went according to plan and the patient is now intubated! Before you start high-fiving everyone, you need to think about how to control the bleeding.

It just so happens that your trauma unit has a max fax theatre, which is used once a week for local elective cases. You need to get a pair of epistats and some bite blocks and a semi rigid cervical collar. 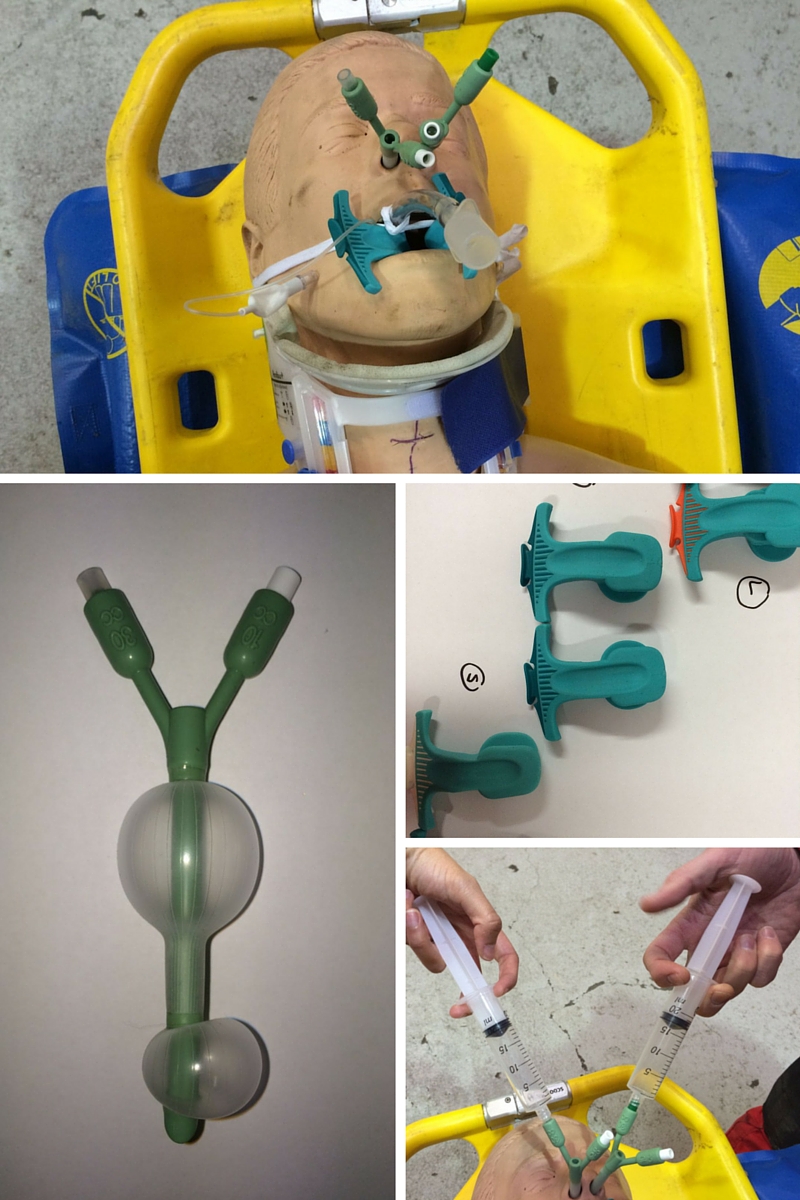 An Epistat (bottom left picture) is a nasal catheter which has an anterior and posterior balloon. They are inserted in the same way as a nasopharyngeal airway, along the floor of the nose. The posterior balloon holds 10mls of saline and the anterior balloon holds unto 30 mls. The key to success is inserting an epistat into each nostril first before inflating the balloons. Then simultaneously inject the balloons with saline ( using two people is easier than one person using both of their hands).

The overall aim is to create a rigid vertical structure:

There are various accounts on which order this happens. I have always been taught that after the patient has been intubated:

Now you have done all you can to stabilise the patient and transfer on for a CT scan or to the nearest MTC. Your can finally give yourself that deserved high five.