Walk into any Emergency Department in the country and you are bound to find at least one child waiting to be seen with a head injury – it’s one of the commonest presenting complaints to EDs in the UK. Approximately 295000 children under the age of 16 will be seen each year (which is why we decided to have an induction blog on it). This blog focusses on paediatric head injury – we’ve got another one on adult head injuries here.

Children have several anatomical and physiological difference to adults that make them more likely to sustain head injuries and more complex to assess.  In this blog, we’ll go through those differences, talk about the assessment of the child with a head injury and then discuss the treatment of these children, depending of the severity of their head injury.

Remember that children in hospital are often scared and upset, and don’t forget their parents (who will also be scared and upset). Children often regress a stage when they present to hospital, so getting the parents onside is really important. Be calm, be friendly and make sure both the parents and child know what you’re going to do before you do it. Assessment of the unwell or injured child often involve things that look unpleasant to the outside world (for example, assessing for a pain response), and it’s very easy to lose the trust of parents or carers if you’re not careful.

Most of the children you will assess will have a minor head injury. Remember proportionality – falling a long way for a child is not the same as for an adult, and vice versa. If a toddler falls their own height – it’s not really a long way. And toddlers will fall their own height A LOT, they are fast and nosy.

The way they fall is also different, due to proportionality. A toddler does not fall down stairs in the same way as adults, in that they don’t fall down in one projectile movement, but tumble downstairs, meaning they have a collection of small falls, reducing the mechanism of injury (MOI).

You will also have to innovate, extrapolate and economise how you assess them – “head, shoulders, knees and toes” is a great way to assess most of their motor function!

If the child has presented with a head injury as part of a major trauma remember your (C) ABCDE and work systematically. You should always have plenty for friends around to help as part of the major trauma team.

If the child is awake and the parents are present, make sure the child can see them. If the situation allows, let the parent hold the child’s hand and offer as much reassurance as possible – they will be the best at calming their child down. If the parent is too distressed, or the acuity of the situation means they need to stand away from the bed, assign a member of staff to keep talking to them and keep them calm as this frees you up to deal with the medical side of things.

Why children are not little adults:

Children with have a few important anatomical differences to remember when you see them the ED. Here’s a quick run down of what you need to know – for the longer version, check out this blog post we released a while ago.

As you can imagine, GCS assessment of children, particularly those who are pre-verbal is tricky. You can use an AVPU score as a general guide, but the NICE criteria work off of a formal GCS. Below is a table for grading a young child’s GCS. For children over 4, you can use the adult GCS.

Like adults, NICE have very particular criteria for performing a CT scan in children with a head injury, and we generally base our assessment of these children off of those criteria. 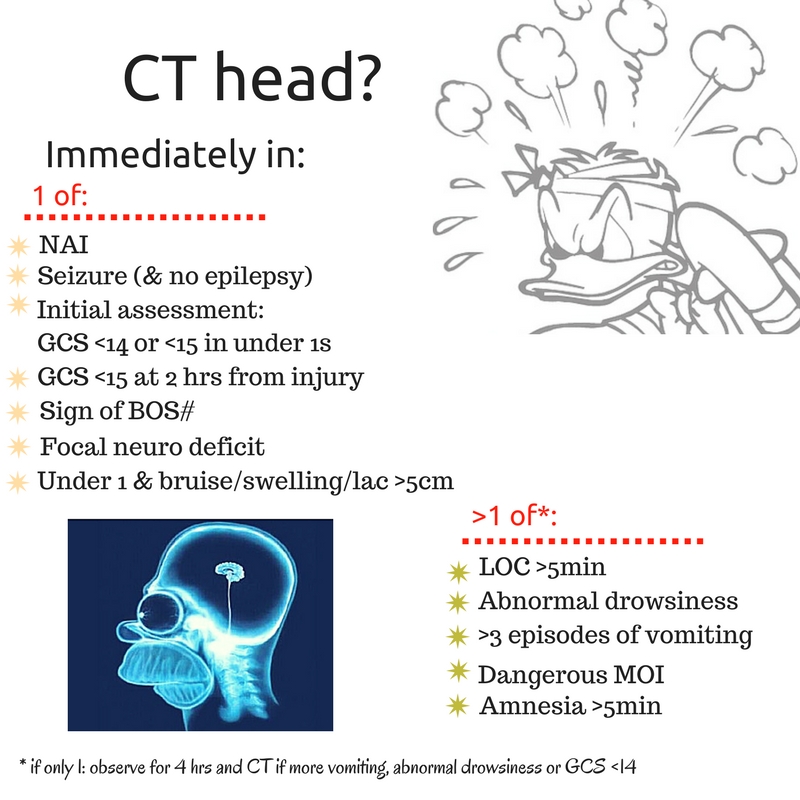 Children who need an immediate scan:

If one risk is present, children need observation for at least 4 hours post head injury

If there is more than one risk factor present, children need an immediate CT scan

If children are taking warfarin (or another anti-coagulant) they should have a CT scan within 8 hours of injury.

A word on vomiting:

A lot of children vomit after a head injury. We don’t know why and there has been a fair bit of research into the significance of isolated vomitingin children following a head injury, which suggests that the likelihood of a significant intracranial injury is unlikely. However, my advice would be to always follow the guidelines and discuss with a senior when unsure.

Make sure you take a good history from the parents when it comes to any vomiting as children will often retch and vomit several times in quick session. This would be classed as one discrete episode, rather than several separate ones. Giving analgesia and anti-emetic to help with this is generally considered a good thing to do.

As with adults, you should always consider a concurrent C-spine injury in all children presenting with a head injury, although the incidence is low. NICE have a full set of criteria regarding imaging selection, but essentially, if the child has a significantly reduced GCS or neurology they should have an immediate CT scan of their neck. If they have pain with a dangerous mechanism but normal neurology, they should have plain films. We have a blog on Paediatric trauma imaging which covers this here.

Unfortunately, there will be a proportion of children who present with head injury who will have a Non-Accidental Injury (NAI). We have a duty of care to all children and you should consider the possibility of NAI in all children you see. We have a whole blog on safeguarding in this iBook, but for head injuries making sure the mechanism of injury meets the child’s milestones is imperative!

Treating and discharging childhood head injuries in the ED:

The aim in managing those with a moderate or severe head injury is about limiting secondary brain injury. Children should be treated using the same principals as adults: maintain normothermia, normocapnia and normoglycaemia. Nurse with a 30 degree head up tilt and avoid hard collars if a C-Spine injury can’t be ruled out, as they can prevent venous drainage, increasing ICP further. Neurosurgical intervention in children with traumatic brain injury is rare but paediatric trauma centre referral is mandated.

Lots of children with a head injury will have a wound of some description. Superficial grazes can be cleaned and left alone. Small, superficial lacerations can often be glued but some will need sutures. Depending on the age of the child, you may be able to do it in the department, either with subcutaneous local anaesthetic, or if you don’t think they’ll tolerate multiple injections, you can consider a topical local anaesthetic (for example LAT gel). Ultimately, some children, especially those who are very young won’t tolerate awake closure of the wound and will need referral for closure under general anaesthetic.

Thankfully, the vast majority of children will go home straight from the ED. They should be discharged with written head injury advice which should include information on when to return and who to contact for advice, and, don’t forget to give them a sticker on the way out!