Sometimes as a doctor it can feel as though everyone has ‘sepsis’ and the term is often bandied about. But this is with good reason. Sepsis is a killer. A major cause of morbidity and mortality. It is not discriminatory. It affects the young, the old. Those previously fit and well with no risk factors who are suddenly in ITU after being struck down seemingly unluckily and out of nowhere. Sepsis is so important that the RCEM has an entire page about it!

There has been much research and focus into identifying and treating sepsis early. For someone in septic shock it has been shown that mortality shoots up compared to someone with sepsis. It has also been shown that prompt identification and timely administration of antibiotics and other treatments can reduce the mortality and save lives. For every hour that appropriate antibiotic administration is delayed in those with septic shock there is an 8% increase in mortality. So simple eh? Lets get out there and treat.

But hang on… not so simple as sometimes sepsis isn’t easy to recognise. As a new doctor to the ED guidelines and tools are your friend. They will help you as you develop your experience. I know as a doctor who has worked on the wards previously you will understand that you identify sepsis, use your hospital formulary to prescribe the correct antibiotics and give other treatments including fluids and oxygen (if needed). This blog will talk more about how to recognise sepsis and use newer guidelines to ensure your management is correct.

When I was what was deemed a “house officer” back in 2012 we learnt about SIRS (systemic inflammatory response syndrome) criteria:

And we learnt that sepsis was defined as SIRS with presumed infection which is a really important point to make, as without it, it can be difficult to use SIRS to pick out those with sepsis. Many other conditions cause a SIRS response such as a pulmonary embolism, pancreatitis or even self limiting viral infections. RCEM sepsis guidelines, and the surviving sepsis guidelines still recommend the use of SIRS criteria to identify sepsis, and then they offer guidance on severity gradings. 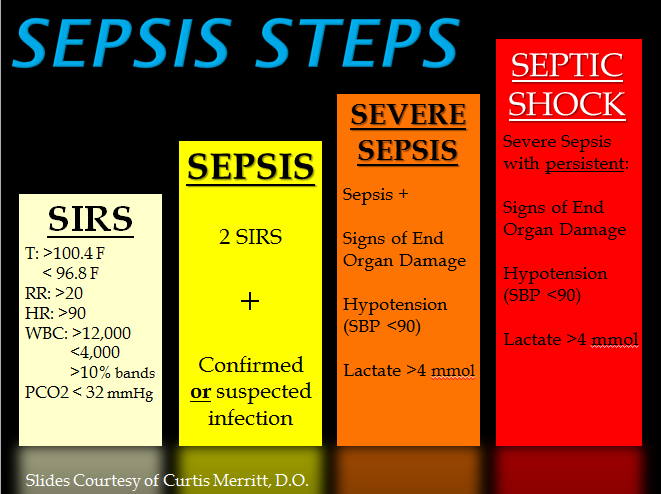 Some studies have confirmed the SIRS criteria are non specific for identification of sepsis. They suggest using a “SOFA” (sepsis related organ failure assessment) score where a changing score of > 2 = mortality of 10%. The qSOFA is a quick bedside alternative, but this has not made its way into national guidelines because it is a tool for prognostication, not identification (if you want to hear more about this, then listen to The Resus Room podcast on Sepsis).

The qSOFA takes into consideration 3 things: 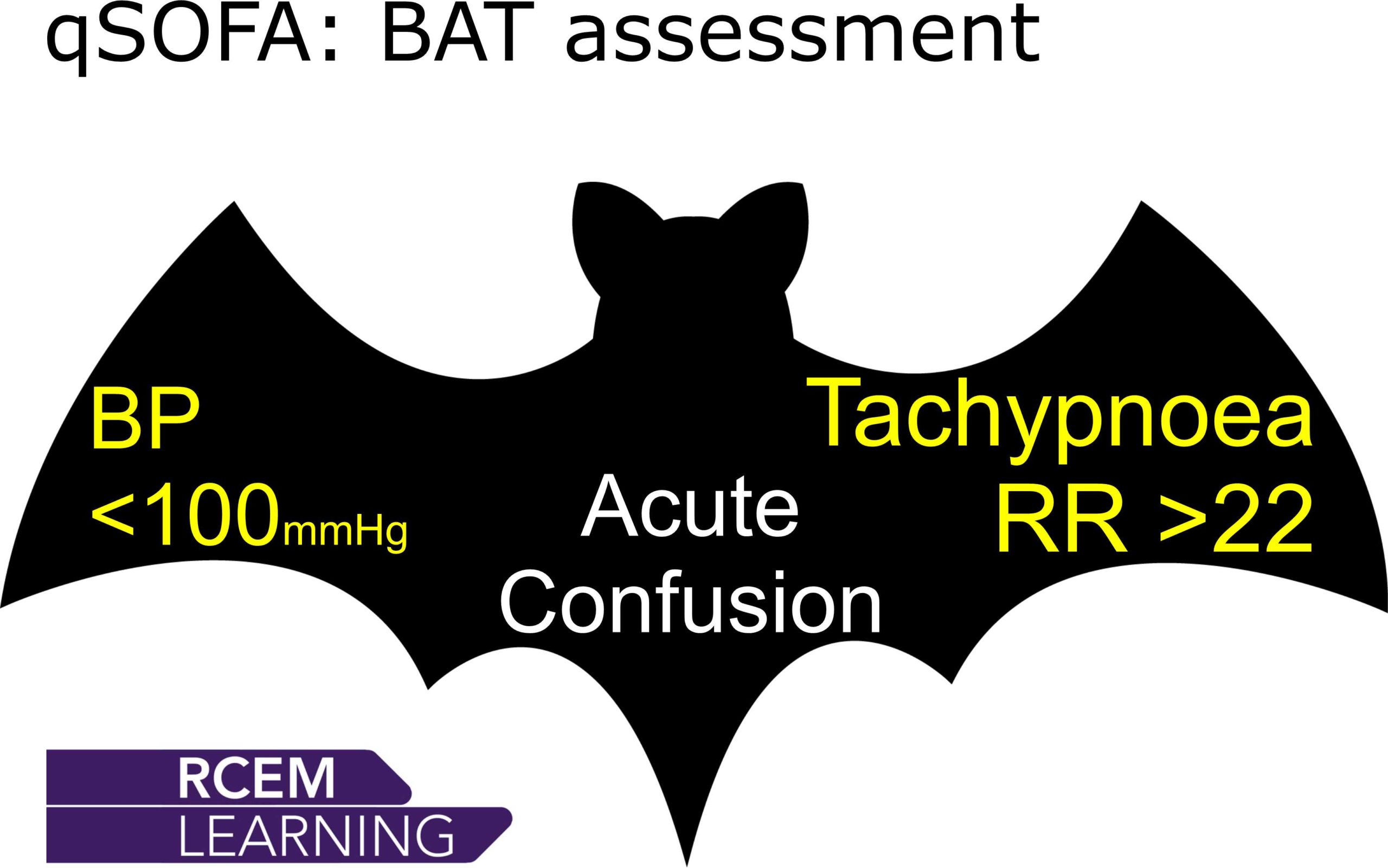 NICE in 2016 brought out guidelines for identifying and treating sepsis. They recognise that diagnosing sepsis is difficult. They write:

”The signs and symptoms of sepsis can be very nonspecific and can be missed if clinicians do not think ‘could this be sepsis?’.
In the same way that healthcare professionals consider ‘could this pain be cardiac in origin?’ when presented with someone of any age with chest pain this guideline aims to make ‘could this be sepsis?’ the first consideration for anyone presenting with a possible infection”.

There are just three things that NICE want us to do:

It’s worth mentioning here that neutropenic sepsis often presents atypically, and guidelines suggest treating any unwell patient at risk of neutropenia as neutropenic sepsis until proven otherwise get the antibiotics in even if the patient is afebrile. These patients include those who have had: chemotherapy within 6 weeks, haematological malignancy, bone marrow failure or transplant or splenectomy.

The investigations for sepsis will depend on which guidelines you use, and whether your patient is low risk or high risk. In the majority of cases, you will manage and treat without waiting for the results of your investigations – but that doesn’t mean you don’t need to investigate these patients.

Complete the “taking” part of the sepsis six – take a lactate, take blood cultures, and take note of the fluid balance status of the patient.

Most guidelines also suggest that patients with any high risk factor should also have an FBC, U&E, creatinine, clotting and glucose you will find you will be doing this for the patient anyway.

Other investigations to identify the source of the sepsis should also be considered this might be a urine dip, a chest x-ray, or sputum cultures.

The first priority in the treatment of sepsis is the “give” part give IV fluids, give antibiotics and give oxygen if needed.

This is where you can make a real difference to your patient’s care. If the patient’s lactate (which should be back now, as you’ve almost certainly got point of care testing) is 2-4, they need an IV fluid bolus within an hour. The best way of ensuring this happens? Give the fluid yourself. If you don’t know how to run fluids through, ask one of the nurses in your department — they’ll be more than happy to show you how to do it. If your patient has sepsis, give them a proper fluid challenge — there is no point giving one litre of saline over four hours, even if they’ve got a history of heart failure. 500ml over 15 minutes, as per ALERT, is reasonable – these patients probably need more fluid. If you’re hesitant to give too much fluid, especially if the patient also has signs of pulmonary oedema, get a senior involved early.

Next step is antibiotics, which also need giving as soon as possible. Most departments I’ve worked in seem to give anyone who triggers the sepsis criteria antibiotics whilst we’re waiting for bloods – NICE have specified who they want us to be given antibiotics straight away to, and who we can wait a bit longer for and perhaps wait for some investigations to come back. The flow chart goes through this nicely.

Remember to check the allergy status before giving your patients antibiotics, and to follow your local guidelines as to which antibiotics are indicated.

All the guidelines emphasise that patients need reviewing regularly. If they are not improving, or are high risk, they need reviewing by a senior doctor. This means that you must get the ED registrar or consultant to review your patient, and check everything that can be done, is being done (and document their review!).

It’s worth mentioning that RCEM has sepsis standards and we should aim to meet them in 100% of cases! The standards for patients with sepsis and sepsis shock are: 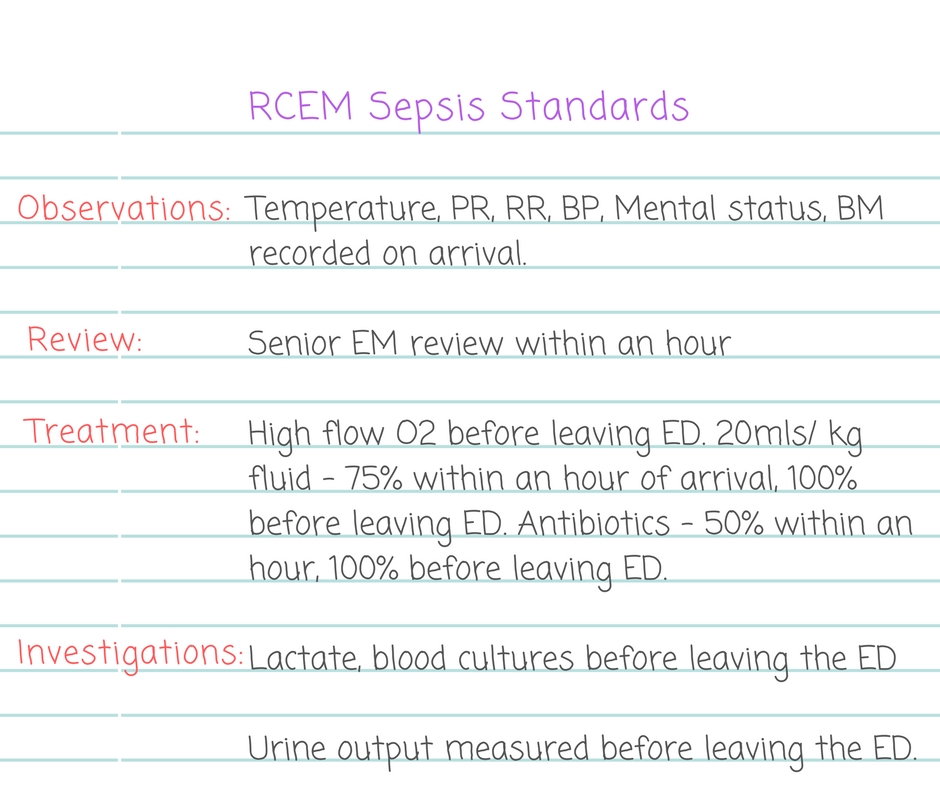 PREVIOUSInduction - DKA
BACK TO POST
NEXTInduction - Bleeding in Early Pregnancy