Your patient is a 70 year old lady with a history of type 2 diabetes and Parkinson’s disease, for which she is on a number of medications. She is usually fairly independent but fell in the kitchen whilst preparing her lunch, hurting her hip and banging her head on the hard tiled floor.

She couldn’t get up and so remained on the floor, fully conscious but in considerable pain until her daughter called round on her way home from work at approximately 6pm. She has been in the department for 4 hours now and has sustained a fractured pubic ramus. She also had a CT head scan but this was essentially normal.

The SHO is worried because when she first took the history the patient was alert and chatty but she started hallucinating after being given opiate analgesia and was quite agitated with this.

Since the team were worried this may have been secondary to her head injury rather than the opiate, she was given a small dose of intramuscular haloperidol in order to help her comply with a CT head scan and the agitation quickly settled.

However, on returning to review her later, the patient has dramatically deteriorated. She is now struggling to speak and is drooling. She couldn’t swallow the tea the nurses tried to give her.   She now cannot sit up unaided, her posture has changed and she is struggling to hold her head up from her chest. Her daughter is very distressed. Blood sugar and observations are normal. The patient has been referred to the medical team but it is likely to be some time before they can assess her.

Three things are probably going through your mind at the moment:

Parkinson’s in the ED 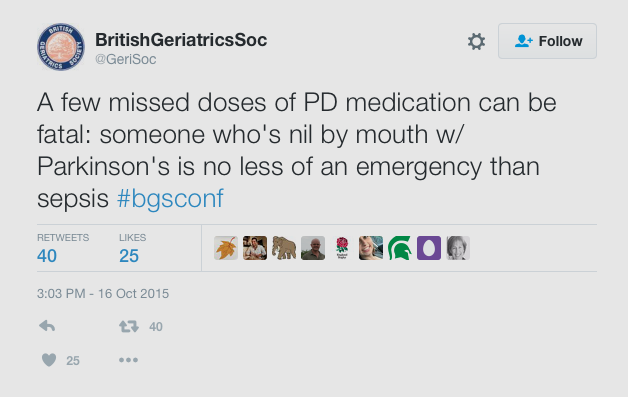 She has also been given haloperidol which is contra-indicated in Parkinson’s.

This patient urgently needs her PD medications. These will now have to be given via nasogastric (NG) tube since the patient is unable to swallow. This must be done as a priority. A transdermal patch (of rotigotine) is available if the NG is not possible, but the first line option is to give her usual medications urgently via NG.

It is also important to check the patient’s CK. Not only has this patient had a ‘long lie’, but people with Parkinson’s can develop a Neuroleptic Malignant Syndrome like disorder if their medications are suddenly stopped or if they are given a dopamine antagonist such as haloperidol, as in this case.

It is vital not to delay the giving of Parkinson’s drugs. Even though it is a very busy department, you must not simply refer to the medical team to sort out her medication later, particularly as you know they are likely to take some time. Any additional delay to this patient receiving her medication risks rapid further deterioration and life threatening complications such as neuroleptic malignant syndrome, aspiration pneumonia and pressure ulcers. 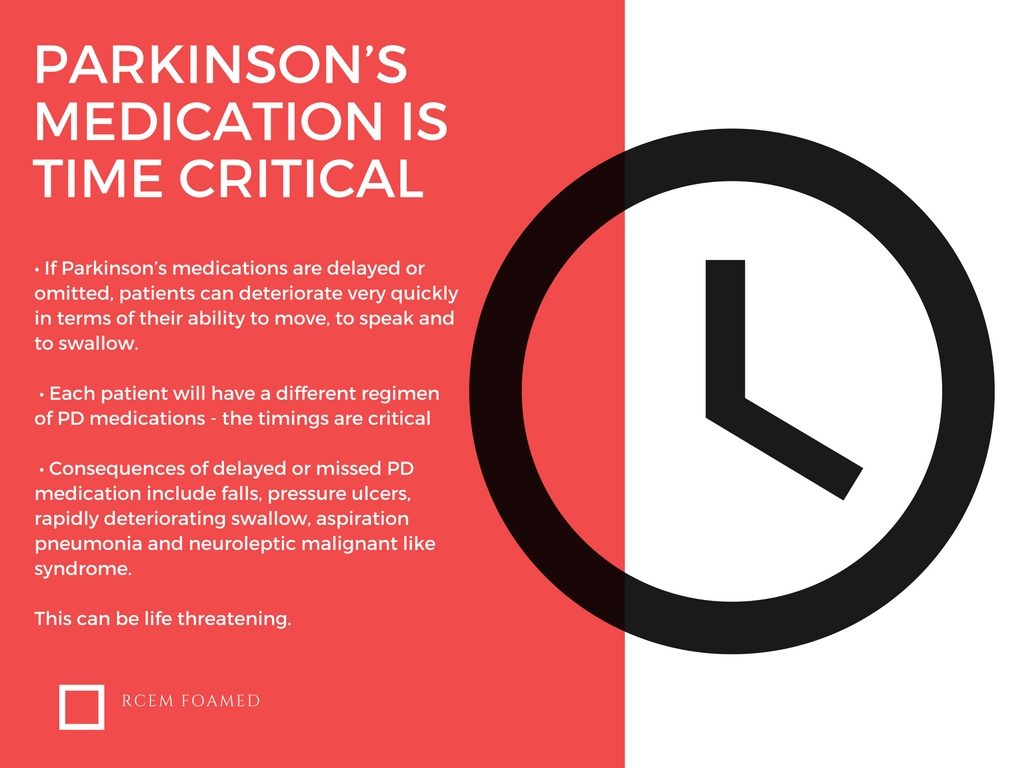 So what is Parkinson’s Disease (PD)?

Many people think Parkinson’s (PD) is just a tremor, but it is much more than this. Parkinson’s is a complex neurodegenerative condition. It is not completely understood but is related to the progressive loss of dopamine producing neurons within the brain. The triad of signs commonly quoted is “tremor, rigidity and bradykinesia”. However, Parkinson’s has many additional signs and symptoms, both motor and non-motor, which affect patient’s lives in many different ways.

Why do I need to know about PD in ED?

People with PD rarely present purely because of PD itself.   However, patients may attend ED with complications of their PD (for example falls, delirium, severe constipation or aspiration).   In addition, PD may complicate the presentation and treatment of any emergency – for example pre-existing autonomic instability will make sepsis or hypovolaemia more difficult to assess, and the requirement to take regular time critical medications makes managing reduced conscious level or need for sedation/anaesthesia more difficult.   Patients in ED may delay/miss their PD medication since this may not be seen as the immediate priority by ED staff. This can cause life threatening complications. 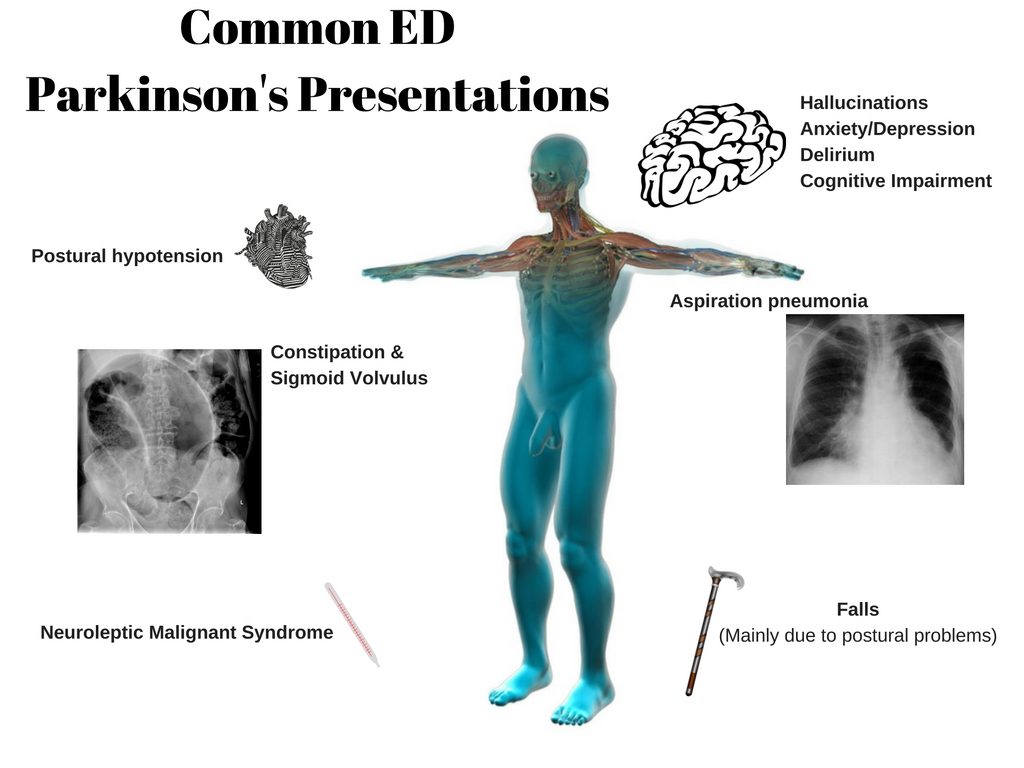 Cardiovascular
Postural hypotension is common in PD. This may be the presenting complaint or can complicate any condition causing haemodynamic compromise.

Respiratory
Aspiration pneumonia due to impaired swallow -ensure medication is not missed.

Gastroenterology
Constipation can be severe. Sigmoid volvulus can occur and may be recurrent.

Falls
Often multi-factorial but remember PD itself causes postural instability and postural hypotension. Added to this there may be other contributing co-morbidites. Any acute illness can also lower the threshold to fall. Don’t blame PD without excluding acute illness.

Missed PD medication or administration of dopamine antagonists (most anti-psychotics, including haloperidol; metoclopramide and prochlorperazine) can cause rapid deterioration. Neuroleptic Malignant Syndrome may result – give their PD medication urgently, via NG if necessary.

Psychiatry
Hallucinations, depression and anxiety are common. Patients may have PD related cognitive impairment or dementia and are vulnerable to delirium. Rarely patients may develop dopamine dysregulation symptoms and may ‘shop around’ ED departments for extra medication.

Remember: People with PD can present with any emergency condition. The pitfall is focussing exclusively on the presenting complaint and overlooking the PD. This may impact on the emergency assessment and will deteriorate rapidly if time critical medications are delayed or missed. 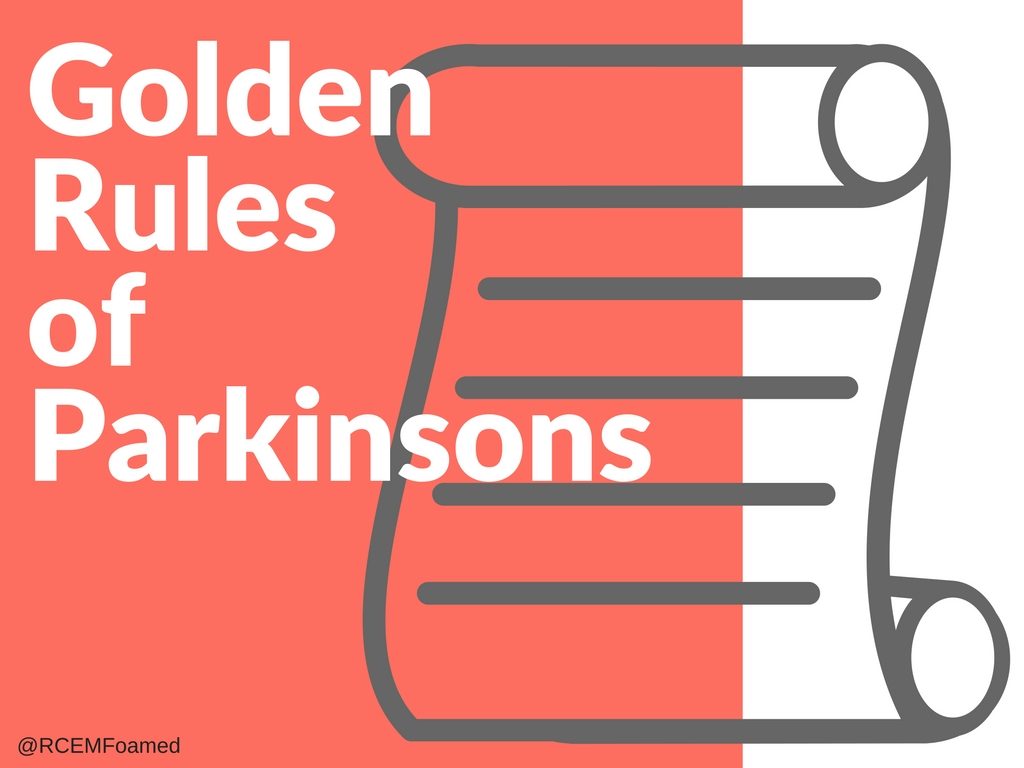 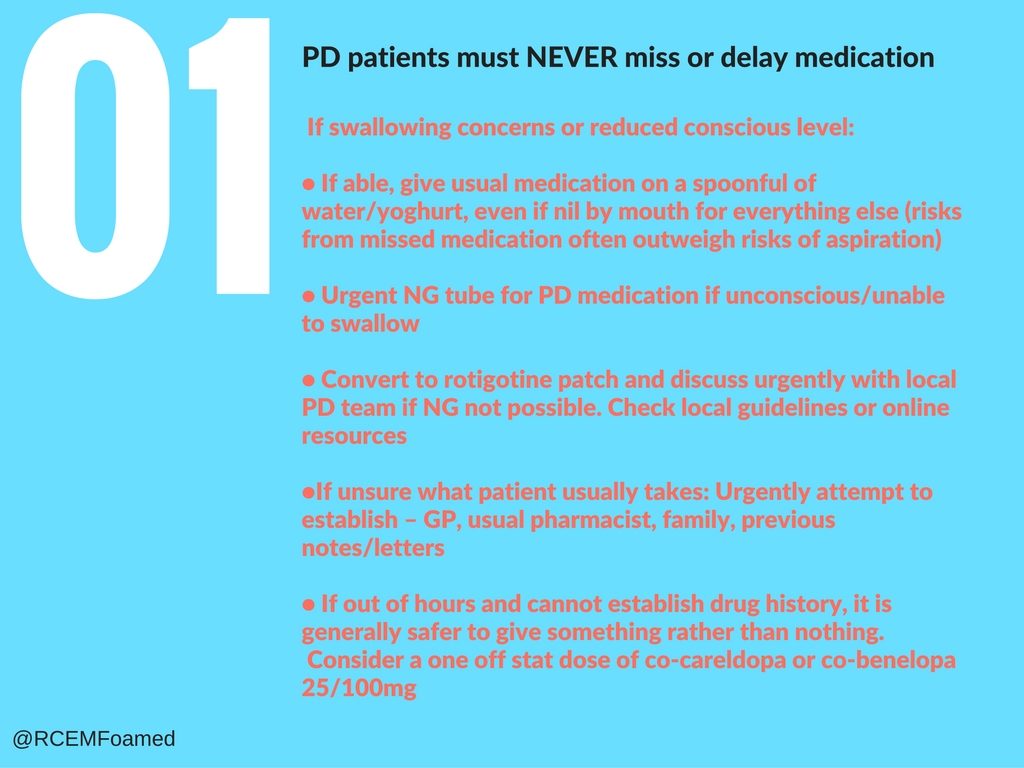 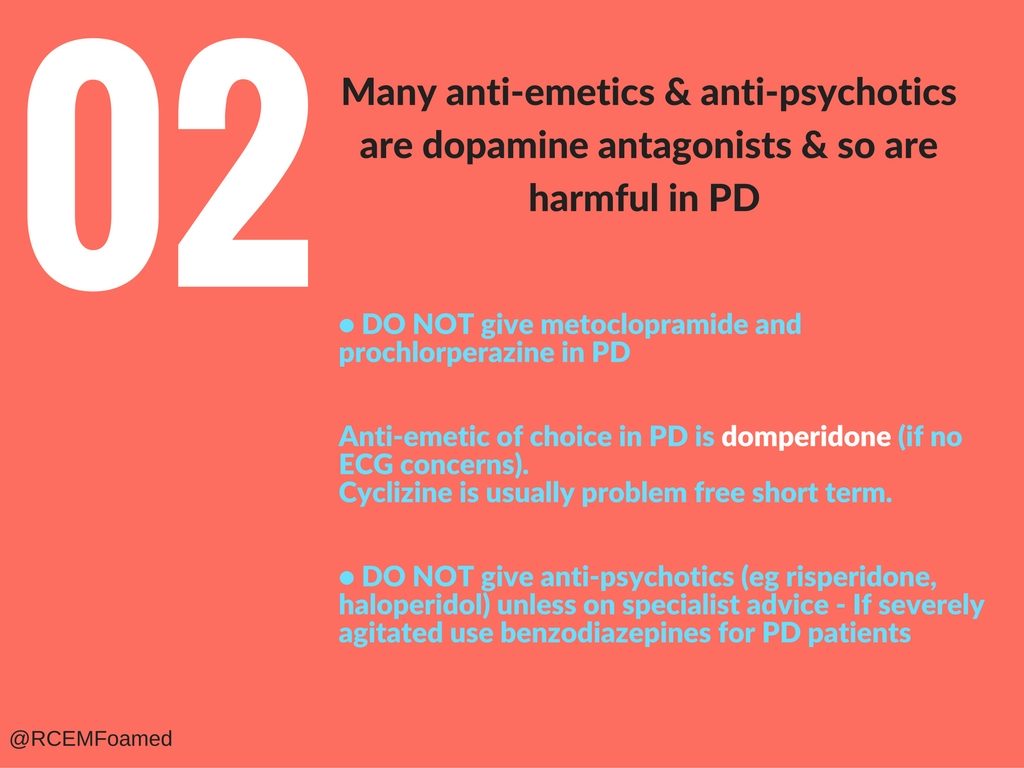 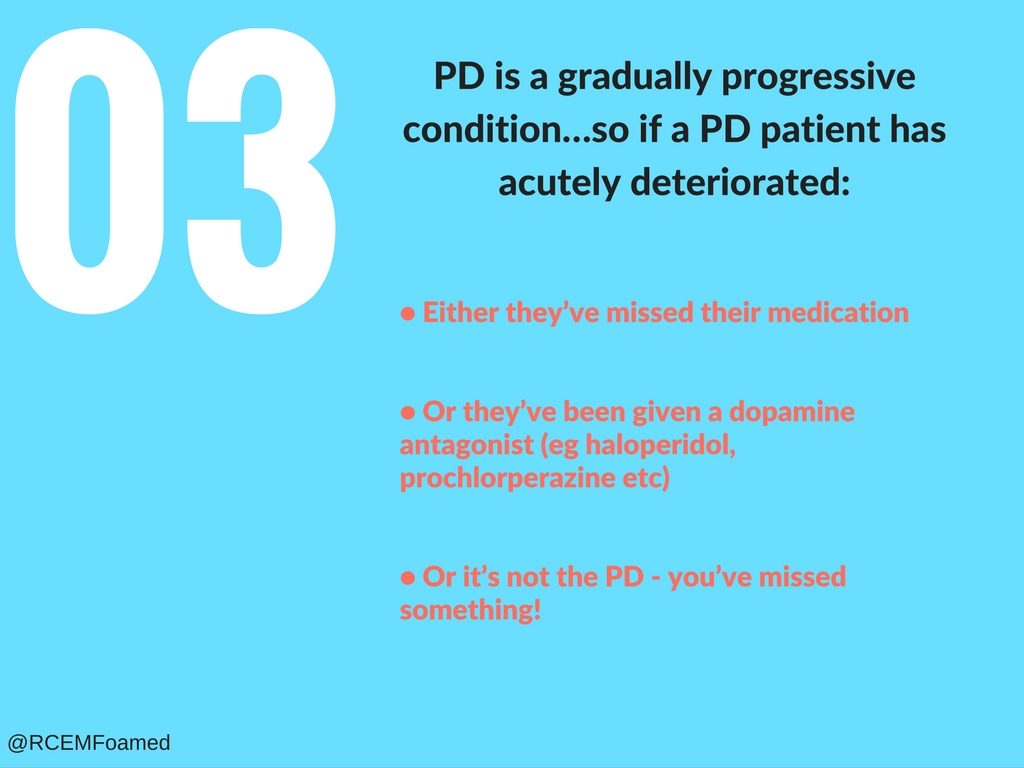