Although it’s likely that if you’re a FOAMed fan, you are aware of the benefits of social media, the world wide web can, unfortunately, also have a dark side. This month, Aintree University Hospital’s Director of Communications & ex-journalist Fin McNicol talks to us about how our online interactions may be picked up by the mainstream press and what to do if they are.

It doesn’t seem very likely, does it? No-one would go out of their way to put potentially embarrassing photos on a news website read by tens of thousands (or millions) of people.

But, as an increasing number of medics have found out, this might be more likely than you may think.

There’s no doubt that social media has offered some real benefits to medics, in particular the rise in online communities which support both professional discussions and networking.

However, the accessible, just-press-go nature of any social media channel can easily lull you into a false sense of security (despite numerous warnings from your professional bodies, academic institutions, employers, colleagues and friends).

You’d be surprised (or maybe not) about the number of medics who have asked me to retweet their post on a research conference from our hospital account, when a quick glimpse down their timeline gives a fairly instant range of comments or images which, used out of context, could cause them considerable embarrassment or spark a call from an eagle-eyed reporter who follows us.

The media, though, have no such complacency, and have enthusiastically embraced the opportunity to illustrate stories by pouring over doctors’ social media output and running photos copied from them with a caption marked “Facebook”.

That shouldn’t be a surprise to you either. The media cycle is now increasingly moving 24/7, with many regional “evening” or “weekly” newspapers now publishing their stories online at any time of day, as soon as they get them. Sales of paper copies of newspapers continue their sharp decline, with only the free papers really doing well (1). Newsrooms with budgets cut to the bone are increasingly employing much younger, less experienced reporters, who are encouraged to prioritise publication of popular stories on their papers’ websites or social media accounts.

With no deadlines any more, every minute is a deadline, so if an image can be found quickly, without even having to leave the office, then it’s a total no-brainer for the reporter, intern or picture desk. There’s no big conspiracy or anti-medic media agenda. There’s just a bunch of young reporters looking for an easy story. If I was still a journalist, then I’d be doing the same.

Now you may be dismissing the chances of this happening to you as a one-in-a-million chance. However, that again may be unduly optimistic.

Let’s start by leaving aside politically-motivated stories from the dailies. Unless you are actively involved in a national leadership role of some level, these are unlikely to be a risk to you.

However, irrespective of how competent you are, the one thing that you know is that, at some stage in your career, one of your patients or their family will be unhappy with their care. And at that point, as a doctor, you may well find that you are the natural focus of their concern.

Ten years ago, that would probably have meant a letter to the Complaints Team. Depending on your hospital, you might have ended up sitting down to discuss the issue with them, or maybe just have to contribute to a lengthy response letter.

But now, in a time when most people have the potential to reach hundreds, if not thousands of others almost immediately, the first action of choice is increasingly becoming to tweet or post details of their concerns. Again, this isn’t a surprise as Ofcom note in their Adults’ Media Use and Attitudes survey 2017, pretty much everyone who isn’t already on social media is quickly getting onto it, fuelled by the accessibility and immediacy of smartphones. The number of internet users aged 75 and over embracing social media is rising, with 41% having a social media profile in 2016, compared to 19% in 2015. As we all grow older, these figures will only increase. (2)

And we can’t blame them if they do. Nationally-endorsed sites such as NHS Choices or Patient Opinion encourage patients to post comments on their care, all fully in the public domain. There are many other smaller ones. Can we really criticise patients if they take the additional small step to give their comments on social media?

More social media users posting about their care also means more potential for an unhappy patient to look at what you’ve posted, or encourage a journalist to do so. And while the media certainly love the stereotype of heroic, lifesaving doctors in the ED, they will not hesitate to use potentially damaging images if they decide to run a negative story which involves you.

So, what should your response be to all this? Well, my advice to you is the same which I give annually to our new intake of trainees.

Firstly, prevention is better than cure. If you wouldn’t say something to someone’s face then why would you say it online, when, irrespective of the type of social media used, it can be copied and used at any time? If a photo could embarrass you, why would you post it?

Secondly, while it’s not an absolute solution by any means, check your privacy settings.

However, as Professor Gerard Hastings told the North West Alcohol Conference in 2015, when discussing the digital marketing of alcohol to young people: 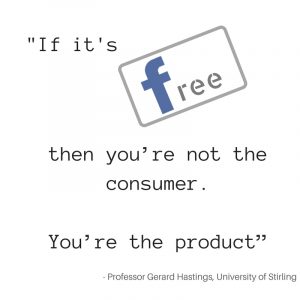 Social media channels are massive data mining operations. That is what they now exist to do, so that the data which we willingly give them can be sold to advertisers. That’s why they’re free to us, and why advertisers spend money on them, which is how they make money.

So ask yourself this: when you accept that latest update (if you haven’t enabled it automatically anyway), is it likely that your comments and your images will be more secure or less secure?

The answer? Check your privacy settings regularly. To be fair, the social media giants are trying, at least slightly, to make it easier for you to check what people see about you. Facebook has a shortcut to check your privacy settings (but it’s easier to find on a PC than on your phone). And Snapchat lets you opt out of its new location service which can show an avatar of you at your location but the default is opt in (3).

However, if the worst comes to the worst, if you do become aware that some of your social media content is being used by either patients or the media, then there’s some good news.

NHS organisations are increasingly aware of the risk which this poses to their doctors. Specialist media lawyer Mark Manley has given presentations to NHS Improvement communications educational events, highlighting the risks to dozens of representatives from hospitals across the country.

And, with the risks known, hospitals are increasingly equipped to support you in tackling the issue.

The first step is to get help. Raise the problem immediately, or ask a senior colleague to support you in doing so.

You’ll probably end up in a discussion (either directly or through a senior) with a senior medic in a management role, someone from the communications team, and the legal services manager. Their aim is to help you to manage the situation successfully, not to give you a row.

I can’t say what the approach will be, because each story and situation is unique. I’ve given advice to doctors ranging from simply ignoring a story because addressing it would probably just increase the number of people seeing it, through to supporting them in legal action, both civil and criminal.

Many times, the priority is to reduce the chance of wider exposure through the media by seeing content removed from a patient’s account. Rather than face legal hurdles, it is often much quicker and more effective to use the social media channel’s own policies and user terms as the basis of a complaint seeking the removal of the post.

You could try that yourself, of course. But my advice is to seek the support of your hospital, who can, if appropriate, engage a solicitor to take this forward. This gives you the benefit of not just the T&Cs but of the case and statute law which supports your request.

I always tell people that the chance of any of this happening to you is very small, but potentially very serious.

And while myself, and my colleagues, will always help medics in this position, we’d much rather not need to.

So be careful out there… and check your privacy settings when you do that next update.

PREVIOUSA Little Podcast on a Great Event - DFTB17
BACK TO POST
NEXTBack Pain Advice - Do you know what to say?
We use cookies to store information to make your visit to this site richer and to personalize information according to your interests. See our privacy policy for more information on what cookies are, how we use them and how to change your preferences.