New in EM: Utility of modified Sgarbossa criteria for OMI

– tradition tells us that you can’t really interpret the ST segment in a bundle branch block or a paced rhthm.
– as soon as we see it, we throw up our hands an d jsut wait for the trop
– but we’ve known since the 90s that in some cases with excessive discordance or concordance of the ST segment then we can diagnosis STEMI. These were the sgarbossa criteria
– they were specific but not sensitive likely because they were validated usinf the best test available at the time – the CKMB
– this paper looks at an updated, modified verison of the sgarbossa criteria developed by the authors.

– i think they convincingly show their modifications are better-
– the challenge is training and education in reading ECGs
– steve smith and pendell myers have been on a campaign to get us all better at reading ECGs and they have aso, i wouls say succseffuly so far been campaigning to change the paradigm for MI from STEMI/NonSTEMI to OMI/NOMI. 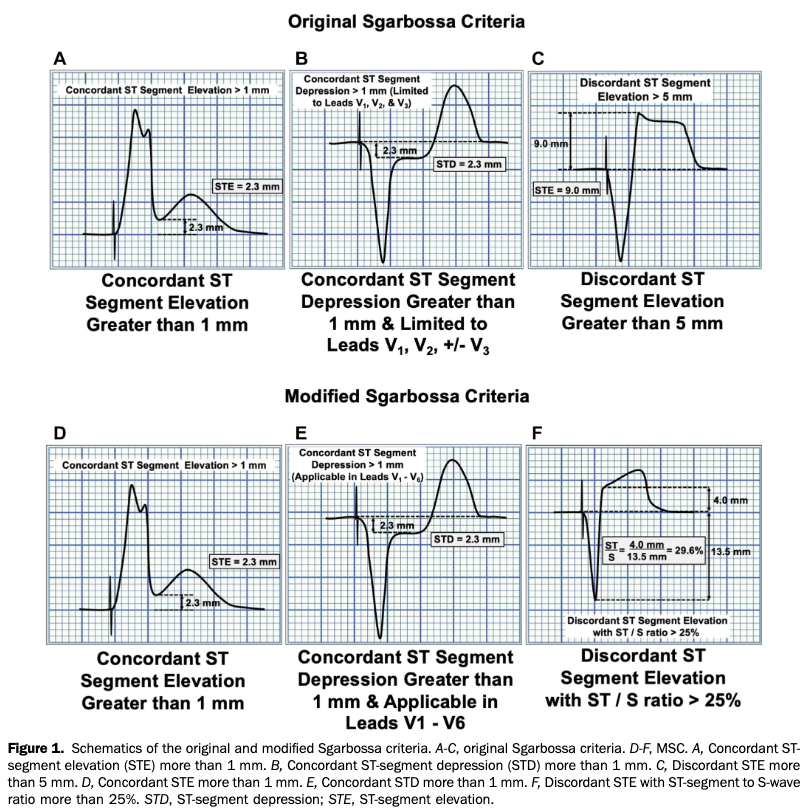 Is there an association between caffeine consumption and tachyarrhythmias?

– Coffee consumption may have multiple beneficial properties, often attributed to antioxidant and anti-inflammatory properties. It’s associated with reduced risks of cancer, diabetes, PD and overall mortality.
– That is certainly my experience as I find it reduces the morbidity and mortality of those around me as anyone who has experience my on a caffeine-low will attest.

This paper is important for two reasons:

1. Its really common that our advice to patients with PACs / SVT / AF etc, when they ask us how they can avoid it – one of the most common pieces of advice is ‘cut down on caffeine’
2. I bloody love coffee, and get PACs.

– A Californian study of data from the UK
– Prospective cohort study analysing longitudinal data from the UK Biobank
– A very large and detailed prospective study with over 500,000 participants aged 40-69 years that recorded extensive phenotypic and genotypic details about the participants and followed them up for a wide range of health outcomes.
– The data is available freely to anyone wanting to perform legitimate scientific research
– Two methods:
1. Assess self reported coffee consumption in cups per day and, after adjusting for other confounders, assess whether that was associated with a new diagnosis of arrhythmia during the follow up period.

– After adjusting for confounding factors – each additional cup of coffee consumed daily was associated with a *reduced* the risk of incident arrhythmia by 3% (HR 0.97 [CI 0.96-0.98; p<0.001]). They looked at individual types of arrhythmia and found the same association for AF (HR 0.97) and for SVT (HR 0.96). They got similar for VT & PAC, too, though they weren’t significant (probably underpowered for those as n was much smaller for all of those).
– **Confounders** adjusted for (if you’re interested)

– So sure, they adjusted for confounders as best they could – but with this sort of study you’ll never be able to adjust for everything…that brings us to their second method…
2. (The clever bit) – Mendelian Randomisation:
– This required a couple of cups of coffee to get my head around and apologies to any genetic statisticians (you I’m sure are avid RCEMLearning listeners) if the following is complete butchery of the concept.

It’s is a research method that uses measured variation of genes with a known function to examine the causal effect of a modifiable exposure on disease in observational studies.

So they identified patients who genetically metabolise caffeine more quickly and so therefore, they suspected, would have increased caffeine consumption, in an objective way that should mitigate against conventional confounders. Then, when they checked the genotypes they were using against the data they *did* find that they correlated to increased coffee consumption in the participants. They also checked that this genetic variant wasn’t in itself a predictor of incident arrhythmia and they didn’t find a difference. Clever.

In this prospective cohort study, increasing amounts of habitual coffee intake were associated with a lower risk of arrhythmia, particularly for AF and supraventricular tachycardia, with no evidence that genetically determined differences in caffeine metabolism modified these associations.

Mendelian randomisation similarly failed to reveal any evidence that expected increases in coffee consumption would be associated with a higher risk of arrhythmia.

These data suggest that common prohibition against caffeine to reduce arrhythmia risk are likely unwarranted.

So, while I think it’s maybe a bit much for us to say caffeine is definitely protective against arrhythmia since as good as these methods are it’s still not RCT data, I think we can at least say there really is an absence of evidence that caffeine causes an increase in arrhythmias.

My practice? I’ll probably stop giving it as blanket advice – but I’ll still advise patients that if they notice an association with caffeine then sure, they can cut down and see if that helps.

There are many components of looking after overseas doctors. Many of them are intuitive and seem common sense, but our experience suggests the basics are often done poorly. We define an overseas doctors as a doctor who has trained, and probably worked, abroad who is embarking on a new healthcare career in the NHS.