Here is a brief overview of three of our favourite and most satisfying PEM procedures. They epitomise ED practice – but can seem tricky to the PEM naive practitioner. Once you’ve identified and managed these once, we practically guarantee you will feel on top of the world! But you’ve got to be in the game to win the game – so get yourself into paeds!

Hair tourniquets sound easy to remove, but can be very tricky. The hair wraps itself round and round a finger, compromising blood flow. It’s much more common in infants, and is a potential cause for them being unsettled and crying. The hair tightening around the finger causes oedema – so even seeing the hair is difficult.

Prompt removal is easiest – hopefully you can see the offending hair, get underneath it, and snip. It may be worth thinking about using depilatory cream which is mostly well tolerated, or a cutting needle.

If all else fails, you may need assistance from your local friendly plastic surgeon – they’ve got fantastic operating skills, and some magnifying loupes.

In young children, the annular ligament which holds the radial head (the end of the radius near the elbow) is more funnel shaped than in adults which means it’s really easy for the radial head to pop out and sublux. It’s common in 1-4 year olds, often with a history of being lifted up by the hand which gives it its third name of nursemaid’s elbow.

The child normally presents with a vague history of trauma or lifting. They are often happily playing, but not using the affected arm. If they’re miserable, consider a supra-condylar fracture in your differentials, as the mechanisms are similar.
To reduce, there are two main methods.

There’s an excellent video explaining this on DFTB.
Which works better, pronation or supination? There are many research papers on this, including one reviewed by RCEMLearning, and the answer changes regularly. Pick one – try it, and if it doesn’t work, try again.

If these methods don’t help, my standard practice is to give the child some analgesia (no, I probably haven’t given it already), send for an x-ray (in case I’ve missed a fracture), re-try. If that fails again, pop them in a broad arm sling, home with analgesia and review – either in paeds ED review clinic or fracture clinic.

For more information, look at DFTB or the Royal Berkshire patient leaflet.

A young adult male got tackled whilst playing football and heard a snap on his left knee. His knee was flexed fully and he noticed his kneecap was dislocated upwards. He was in a lot of pain and was unable to extend leg. On arrival he was made comfortable and started on analgesic gas with the goal of manipulating a likely dislocation.Other history he gave was that he had suffered patellar tendonitis in both knees from his routine sporting activities (football). However, he had never had a patellar dislocation.

On examining the left knee, the patella was superiorly dislocated 3cm above the knee, with the knee held in flexion. He was hesitant to straighten his knee and had a limited range of motion with inability to straight-leg raise. There was no significant swelling, warmth or redness. Sensation and peripheral pulses were present.
The dislocation was successfully reduced, and plain film radiographs obtained. Because the patient was unable to straight leg raise and the patella remained high riding, he was referred to orthopaedics for review. 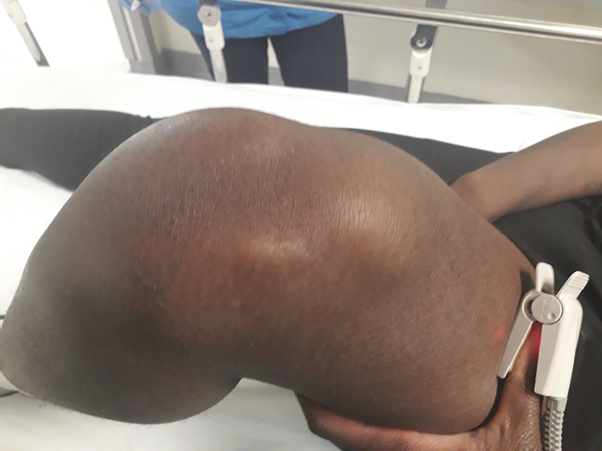 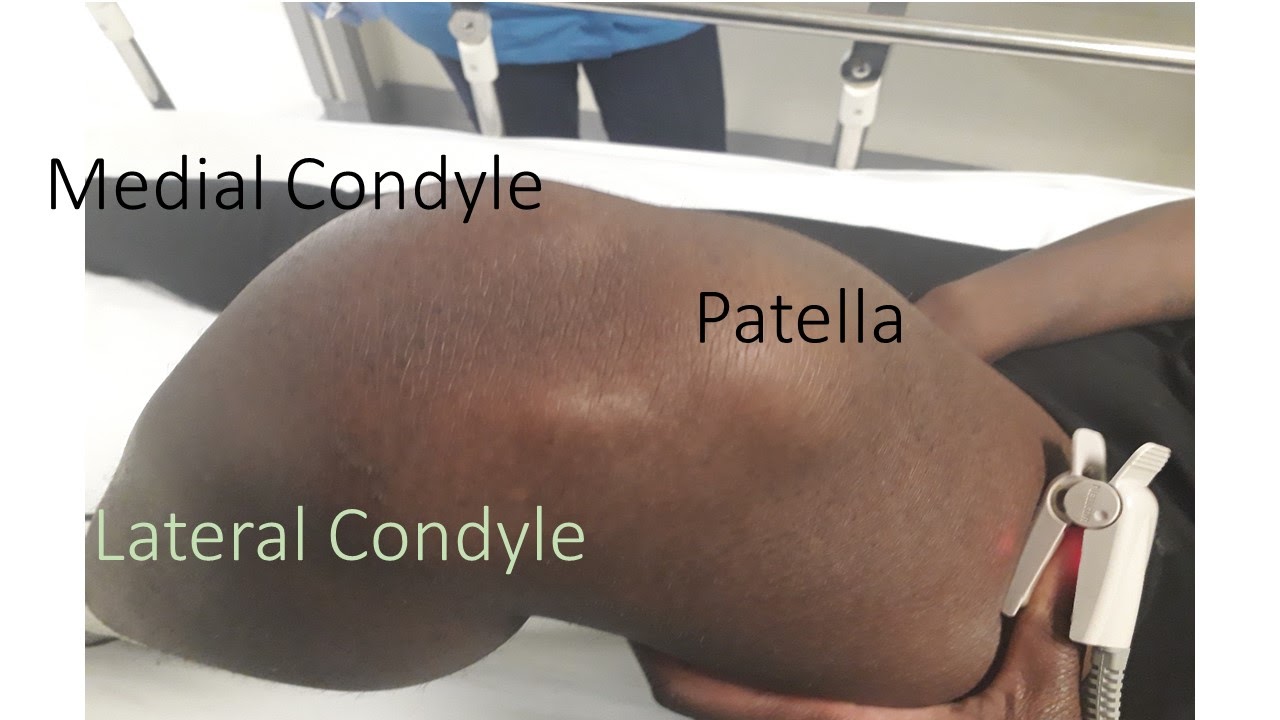 This procedure can be done singly or with an assistant.
Standing on the lateral side of the left leg with the left hip flexed, the knee was extended and the patella was guided into its anatomical position with the index finger and thumb cupped over the patella. It is best to do this with analgesic gas. 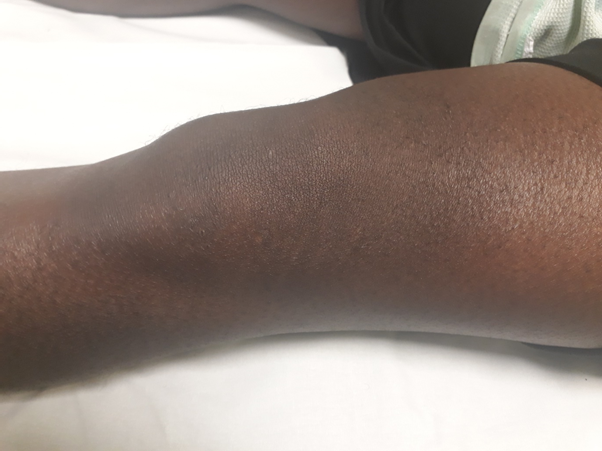 After relocation,  longer acting analgesia is needed, with an x-ray request 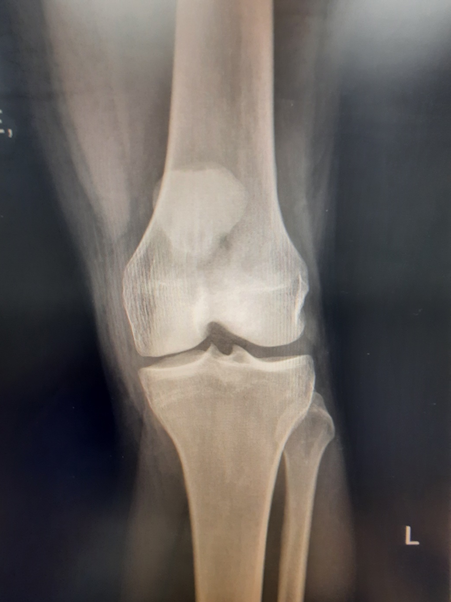 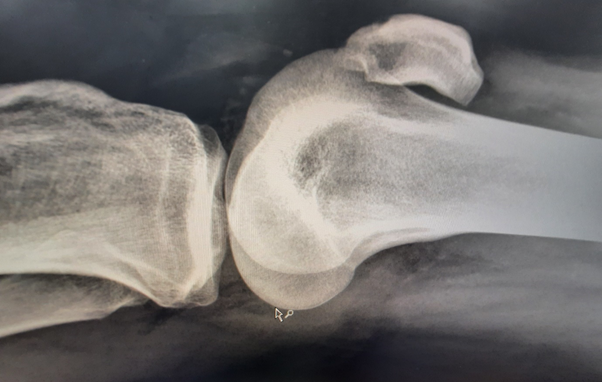 The patella (the largest sesamoid bone) assists in coordinating the forces of the quadriceps and patellar tendons, superiorly and inferiorly, respectively functioning as both a lever (where it magnifies the force exerted by the quadriceps during knee extension) and a pulley (the patella redirects the quadriceps force as it undergoes normal lateral tracking during flexion).

When patellofemoral injuries occur amongst athletes, they are more common in men. In the general population and amongst non-athletes however, women present more commonly with patellar disorders.

injury may be due to direct trauma to the patella or to a valgus stress combined with flexion and external rotation.
Which is interprets as

Typically, when we eventually find patella dislocations, we expect the more common types at first glance. The most common type of patellar dislocation is a lateral dislocation.
Patellar dislocations for ease are classified based on the following: i) location of patella as it relates to its anatomical space; ii) rotation about its horizontal or vertical axis; and iii) the directionality of the articular surface. An extra-articular patella dislocation is one in which the patella is no longer in its anatomical space anterior to the femoral condyles, but instead is found either medially, laterally, superiorly (as our index patient) or inferiorly. Intra-articular dislocations are.

Symptoms of a dislocated patella

When a kneecap dislocates, it will usually look out of place or at an odd angle. But in many cases, it will pop back into place soon. Typical symptoms would include.

Equipment; none. Bare hands and clinical expertise. An immobilizer, crutches, or both are needed for aftercare.

Stand on the lateral side of the affected leg. Slightly flex the hip of the injured leg to decrease tension on the quadriceps, then extend the knee while applying gentle anteromedially directed force on the lateral patellar edge to lift the patella over the femoral condyle. Medial dislocations are similar, only this time stand medial to the dislocation and apply an anterolateral force.

Apply a knee immobilizer when you’re done so that the knee is in full extension.

With knees hyperextended as much as tolerated by the patient, and ipsilateral hip flexion, two digits should be used under medial and lateral borders of patella to lift it away from the surface of the femur. Medial and lateral rocking movements of the patella, while keeping it lifted, help to relocate the patella onto its track on the trochlear groove. Once free, superior and inferior movement of the patella is felt, and the knee can be fully flexed. Reassess for free flexion of the knee actively and passively which connotes relocation of patella. Closed reductions are usually successful.

Some cases of patellar dislocation may require surgical intervention. These are mostly cases of recurrent patella dislocation which is also more common in women. Many dislocations, however, are reduced at the bedside successfully. Spontaneous reductions are also fairly common.

It is essential to establish presence or absence of other complicating events such as an associated patella tendon rupture which may very well also be managed conservatively, involving immobilization, supportive braces and physical therapy, or surgical repair for complete tendon rupture.

These injuries can usually be recognised relatively easily, and swift expert action in the form of reduction and immobilisation can not only ensure reduction in pain and anxiety for the patient, but can also be quite satisfying for the clinician.

PREVIOUSRCEM Spring CPD Conference
BACK TO POST
NEXTHypnosis and EM