This blog focusses on Paediatric Abdominal Pain. Because adults aren’t just big children, we have a seperate blog on adult abdominal pain, found here as part of our adult induction package.

Abdominal pain is a reasonably common presentation in paediatrics-increasing as the child gets older. Babies and toddlers can’t usually vocalise or localise their discomfort so we learn to recognise it by watching their behaviour and examination findings.

In the paediatric ED you’ll hopefully learn to recognise those that need referral and admission and those who can be safely discharged home, though this can be difficult.

Children rarely read textbooks before attending the ED and often don’t fit the bill classically for any pathology. For instance, I once took a child to theatre to remove a perforated retrocaecal appendix: she’d just eaten nuggets and was jumping on the bed and her only surgical sign was a bit of a funny facial twitch when percussing her right iliac fossa. And there was the girl with the non-tender abdomen who had ovarian torsion…there are always the odd ones. But hopefully this will serve as a guide of what to look for, when to refer and when to panic!

Appendicitis (all ages)
Typically there’s a history of central periumbilical colicky pain that moves over the course of a day or two to the right iliac fossa and becomes constant.  Often they vomit (non-bilious) and the vomiting usually starts AFTER the abdominal pain has started. They can be either constipated (ill, dry, not eating) or have diarrhoea (inflammation of the ilium from an adjacent inflamed appendix, or the rectum from a pelvic appendix). They can report pain on urination: it’s not burning urethral UTI pain, it’s pelvic pain when they wee. They may run a low grade temperature, can be tachycardic before fluid resuscitation and when febrile. On examination they’ll be tender, possibly guarding and have percussion tenderness in their right iliac fossa.

Coyrzal symptoms, red throat (children can’t always tell when they have a sore throat) and cervical lymphadenopathy may help point you towards an alternative cause of RIF pain.

Remember analgesia. Contrary to some erroneous beliefs morphine will NOT mask peritonitis or hinder examination. So give them some analgesia.

Keep them nil by mouth (this depends on local protocols, we now let children sip water right up until the anaesthetic room doors but other centres, especially those non-paediatric specific, may be twitchy about this).

Fluid resuscitate them, but don’t start IV antibiotics until they’ve been seen by the surgeon.

Don’t nail your flag to the appendicitis mast too early, do a careful examination whilst distracting and chatting to the child. If their abdomen shows no signs of peritonism and they’re clearly unwell get a chest x-ray and a blood glucose. Pneumonia can present with awful right sided abdominal pain–yes–even without a cough. And no-one wants to miss the child with DKA masquerading as abdominal pain and vomiting.

Girl Things (usually peri to post pubertal ages)
Ovarian torsion and torsion of paratubal cysts can present as appendicitis (especially if on the right side). Typical pain is sudden onset and associated with nausea or vomiting. They can have localised peritonism.  But as I’ve mentioned earlier they can have resolving abdominal pain, no surgical signs, normal observations and just look sick. Ultrasound can help as a normal ovary rarely torts — usually there is enlargement by a cyst or tumour that precipitates it rising out of the pelvis, bobbling around and twisting.

Always do a beta HCG urine on girls with an acute abdomen. Don’t be scared to tell the family you need to do it. A hospital I worked at found a fetal skeleton on a 9 year old’s abdominal xray: it happens.

Pain can be referred into the pelvis, abdomen or loins. They often feel nauseous if they’re not vomiting and may have an abnormal gait. They may just present with the abdominal pain. When you examine a torted testis you can find an abnormal lie, absent cremasteric reflex, swelling, erythema and exquisite tenderness of the testis itself, but as I said before, children neglect to have standard examination findings so refer to someone who can explore the scrotum as soon as you suspect torsion: you’ve got 6 hours to save the testicle!

Intussusception (Babies and Toddlers)
There’s a classic triad of symptoms: episodic screaming with drawing up their legs, vomiting and redcurrant jelly stools but most only have 2/3 of these.  As a rough guide it affects those of 3-18 months after a viral illness. The vomiting can be bilious. The episodic crying can be difficult: crying and drawing up the legs is common in babies with most causes of abdominal pain.

Redcurrant jelly stools, if present, don’t always look like the red mucousy stuff in the books (think bloody diarrhoea explosion).  Sometimes you’ll feel a mass, often the child will be tender with a soft abdomen but be too grumpy to allow you a good feel. These kiddies can be completely clapped-out and need IV fluids, analgesia, NG tube on free drainage and urgent surgical referral.

Malrotation Volvulus (Babies)
You’ll soon realise, if you have the misfortune to see a baby with malrotation volvulus that all those babies with “tender abdomens” that you referred were just crying when you touched their abdomens, in the way that babies just cry willy-nilly at any old thing.  This is a real tender abdomen in a very sick baby.

There’s usually bilious vomiting, abdominal pain, there can be abdominal distension, but a scaphoid abdomen is typical. They can be shocked. A capillary blood gas can show a metabolic acidosis with a raised lactate (but this is not always the case if there is complete venous obstruction due to the malrotation of the midgut). X-ray will often be suspiciously gasless.

These patients are at death’s door. They need IV fluid resuscitation and getting to a surgeon yesterday, if you can manage it. If you can’t, just work quick: these patients have a dead gut.

Malrotation volvulus usually happens to neonates but it can present at any time.  That chap from the Bee-Gees died with it and he was 53!

Green vomiting and abdominal pain
Green (bilious) vomiting is never normal in a normal human.  It’s always something to get a bit excited about.  Bile is always GREEN, yellow vomiting will occur in everyone if you vomit enough. But be careful – parents will tell you it was bile…read this post from St Emlyns here.

Small bowel obstruction (bilious vomiting with pain and distension and a loopy looking x-ray) can usually be found in babies/children with a history of previous abdominal operation … but we never say never in medicine.

Along with being generally unwell, bilious vomiting can be a presenting feature of any abdominal sepsis (such as appendicitis).  This is common in appendicitis in the under 4s. They can’t localise the pain and their symptoms are non-specific. They will present later and due to lax abdominal wall won’t often be “guarding” on examination. This represents an ileus in response to abdominal sepsis.

Always examine the scrotums in male infants as incarcerated inguinal hernias result in bowel obstruction and abdominal pain, although infants will rarely complain directly of abdominal pain-they’ll just be miserable and drawing up their legs intermittently. If you find a hernia try and reduce it after giving the babe some analgesia, if it won’t budge-stop! I’ve lost count of the number of battered scrotums and A&E doctors who’ve sweated trying to reduce a hydrocele that was just there minding its own business in an infant who was unwell with not-an-incarcerated-inguinal-hernia!

Constipation (Any age)
This is generally the kid that gets the whole department in a tizz: they’re rolling around the bed, screaming in agony. The paramedics have given them entonox and morphine and everyone’s convinced they need an operation now!

You calm everyone down, get the kid to breathe and take a poo history-and NOT one which goes “how are your bowels?” “Normal”.  Everyone’s normal is different.  Ask them how often, how much, what colour, does it hurt, do you have to push and get them to point to a poo on a cartoon Bristol stool scale and make it fun. You can then feel the left iliac fossa mass of stuck turd that’s causing the worst pain known to man. If you can’t feel anything an abdominal x ray (after a full history and a set of normal observations) might reveal the beast. We tend not to PR children.

The beast-once confirmed can be slayed with an enema, they’ll get immediate relief after a big poo. (Editor: I find that in children who aren’t in agony, suppositories and analgesia can go a long way. An enema can then be plan B if unrelieved within a couple of hours).

Mesenteric Adenitis (Pre-pubertal)
This is probably the most common cause of abdominal pain that I see. It causes right iliac fossa pain so is often mistaken for appendicitis, but they’re not off their food and rarely vomiting. Often they’ve had an URTI, a high temperature (over 39°C), palpable neck lymph nodes and erythematous throat. The pain is due to inflammation of mesenteric lymph nodes and Peyer’s patches in the terminal ilium. 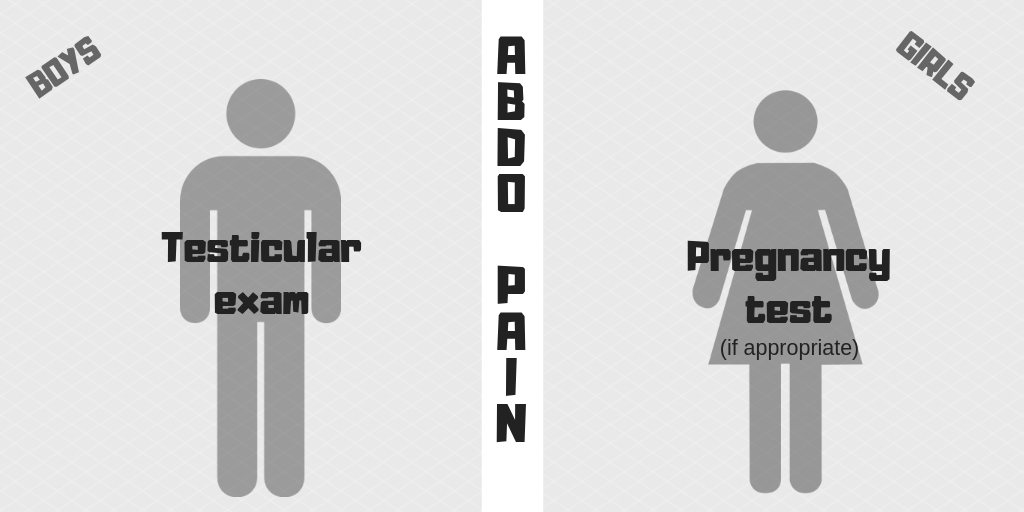 Ask them how they got to hospital and how their journey was. If it hurt every time they encountered a bump in the road, there is indeed (usually) abdominal funny business.

If a child is chatting about their new puppy they won’t be taking part in any abdominal guarding/misleading abdominal signs. Believe it or not some children, whether conscious or not, really do ham it up when it comes to abdominal examination, often just living up to parental instructions “do tell them when it hurts little Napoleon, tell them, TELL THEM NOW!” Reassure them, you’re not looking for them to tell you (you’re looking for unconscious signs). Getting them to hop or jump is fairly conclusively not peritonism (with the introductory case being one of those exceptions).

Bloods can be taken with a finger prick, but often aren’t necessary.

Cannulate and resuscitate any unwell child, there’s no excuse not to. Ever.

This article covers the generic assessment and management of the pain with abdominal pain without shock.

Back pain is common: it is estimated that 60-80% of the population have back pain at some time during their life.

This session covers the pathophysiology of pain, the use of pain assessment tools, typical analgesic agents used in the ED