Another interesting day has come and gone at #RCEMBelfast, for those of you who missed it the RCEMs FOAMed Networks, Nikki Abela, Dave McCreary, Simon Laing, Rebecca Maxwell and Andy Neill try to fill you in.

Day 2 at the #RCEMBelfast conference carried on where day 1 left off with some fantastic topics and speakers.

First up was Adam Reuben, a self confessed ‘consultant in pragmatism’, with his talk on Blood test medicine is on the whole, bad medicine.

Namely, he spoke about how the increasing sensitivity of troponin and it’s ability to identify infarcts that would previously have been missed (positive) weighed up against how we were now entering a period of ‘troponinitis’ which sees us testing patients who should be below a threshold of investigation. We are now beginning to test for our own comfort rather than for the benefit of the patient, he pointed out.

Continuing on this theme, which picked up throughout the day, Adam talked about the importance of fundamental Emergency Medicine, where a sound history and examination should then select appropriate tests to aid diagnosis and treatment.

For more on testing check out the CEMFOAMed podcast on diagnostics.

Next up was Simon Porter, a consultant radiologist talking about the benefits of MRI in the ED. He talked about the application of MRI for hip pathology.

He talked about how important it was to create those links in the ED with radiologists, to potentially investigate further patients who we were clinically worried about.

Echoing what Adam said, Simon talked about the importance of clinical suspicion, where if initial images are normal to consider MRI to pick up a range of pathologies (e.g. the pre-slip in SUFE).

Interestingly, Simon also talked about an interesting #PedsPearl : The modification of Klein’s Line in SUFE by 2mm to improve sensitivity from 40-79%.

RCEMs very own Taj Hassan gave a second talk at the conference, today discussing Creating Leadership Resilience in the ED.

Pushing forward the RCEM strategy and the recent publication on Creating successful, satisfying and sustainable careers in Emergency Medicine, Taj appealed to all of us in the specialty to look after ourselves when dealing with day-to-day difficulties.

His Top Tips on creating resilience include:

The excellent Prof. Suzanne Mason was next talking about the as-yet unpublished AHEAD trial (Head Injury in patients on Warfarin- this is the abstract).

Although this study created some controversy, the conference attenders did get a sneak peak at the main messages from the, as yet, largest study looking at head injury in patients on warfarin.

In the next lecture, Suzanne Mason ran us through the Top 10 papers from 2014:

These three trials, in a nutshell, all look at EGDT in Sepsis and their bottom line is that it that it doesnt make much of a difference to usual therapy, coined by Andy Neill as sweet FA -i.e. fluids and antibiotics of course (what were you thinking?)

The #Pearl from this study was to multiply a patients age by 10 to create an age-adjusted d-dimer cut off.

Clinician gestalt measured on a 5 point likert scale in combination with ECG and later troponin testing (12 hour) compared achieved 100 % sensitivity for diagnosing AMI, with potential to avoid admissions in 41.7%. This, however, needs external validation.

No difference in outcomes for 2 hour survival rates or 6 months survival rates for OOH Cardiac arrests. However, many people at #RCEMBelfast argued there were practical considerations for these devices which were not accounted for.

If you would like to hear more rumblings about the 2014 Prehospital/EMS articles of the Year, ketaminh has an excellent piece here.

In spinal reflex medicine, the diagnosis is easy, he joked, using collapse on the toilet (PE of course) as an example.

Pitstop triage, a term coined from Derby, does fulfill a (fair) few purposes:

-Directing traffic through the ED

The afternoon sessions on the second day appealed to the paediatric-loving among us.

The first topic was almost somber as it talked about Child Sexual Exploitation. Now, as a PEM hopeful and someone who has done so much reading on this topic, I know this is a popular one at the moment, and even speaking to our named doctor for child abuse at Alder Hey Childrens Hospita, this is becoming an increasingly important topic as we are only seeing the tip of the iceberg of what is actually happening in Child Sexual Exploitation (CSE).

Susanne Hewitt from the Royal Derby Hospital talked about how children, especially young teenagers, are being groomed by adults into forming relationships. They are being tricked into thinking that this was a legitimate relationship, that they had consented to, and were getting gifts from older adults in exchange for them performing sexual acts. Of course, initially, the child lacks insight into how this is exploitation, not realizing that there is an element of lack of choice in terms of whether they are able to consent about what happens to them.

As the relationship progresses, the consent may become withdrawn and they become coerced into doing something they do not want to.

This is something we are seeing today, Dr. Hewitt continued, pointing out that in the Emergency Department, we play a key role in being able to look out for these children, who may present to the ED, with generally non-specific complaints.

The 2013 Document No one noticed, no one heard found that 80% of children who had been abused had tried to tell someone, but disclosures were either not recognized or understood, and Dr. Hewitt pointed out that we really need to invest time in learning to converse with children and asking the right questions.

If you want to read further, the Academy of Medical Royal Colleges published a document on Improving Recognition and Response in Health Settings, and if you keep you eye on our website/twitter, I have worked on a podcast on child abuse, which will be published in the near future.

The next topic was a lighter one, as suggested by the title Greetin Faced Weans (translated to The Crying Infant for the non-Scottish among us), by Vince Chaudhrey. I was pleased to hear that even Vince admitted that the presenting complaint of an afebrile child under 1 year with crying, is a heart sink for most clinicians (even himself). And he knows that if that child is next waiting to be seen before his tea break, he knows they will still be waiting to be seen when he is post-prandial.

Why is this such a challenge for us ED clinians? Well, its got a lot to do with the possibility of missing something serious and acute, mixed with the non-specificity of the complaint and the high expectations of the parents.

So how much crying is normal? (yes this has been quantified):

You will be happy to hear that Vince pointed out that the mainstay of evidence proves that history and examination will give (at least) a clue to diagnosis in the vast majority of cases.

On top of that, a urine MC&S was found to be useful to rule out a UTI. Other tests were not found to be generally useful, but will be needed to augment clinical findings.

In fact, with meningitis/bacteraemia (which is the main diagnosis we are worried about missing at the end of the day) studies have found that while 13% of infants were afebrile at presentation, only 5 did not show signs of infection.

In fact, if there are no red flags on history taking and examination and the child has stopped crying and observations and examination is normal, it would be appropriate to consider discharge, Vince said.

However, always go with your gut feeling, and admit a child for observation if you feel the need to. Also, continuing on the first topic, never, ever, forget NAI.

Next up was Mark Jenkins practical session on The Art of Laceration Repair in Children. This area, has a low complication rate, more due to innate patient healing capacity than medical intervention, according to Mark. 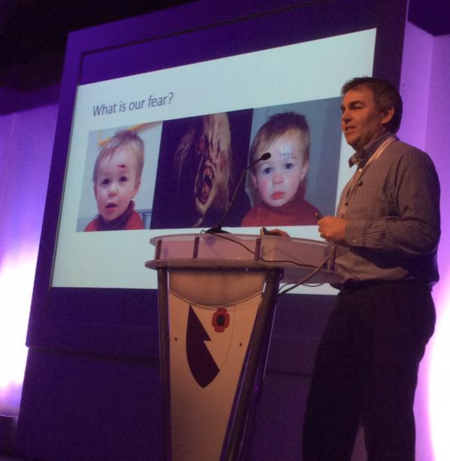 Last talk of the day was delivered by Maya Naravi, a PEM consultant in Calderdale and Huddersfield. She talked to us about the Highs, the Lows and Anything Goes in PEM in a DGH. Certainly, for me, a PEM hopeful, this was useful insight into the career Im choosing.

For the rest of us ED clinicians, Maya talked about the usefulness of simulation training, which is something much talked about in the FOAMed world.

Indeed, in PEM, and in the hospital I work in, this is an important way to keep our skills up to date and help us explore how we can improve the service we give.

If youre interested in joining a course, Maya had a few suggestions:

That closed our second day for the conference, please follow us on twitter for more discussions on #RCEMBelfast, and dont forget to follow the @RCEMFOAMed Network and keep your eye on our website (and our podcast/feedly) for more updates.