RCEM ’15 in Manchester has been a sell out! So for those of you that weren’t lucky enough to be here, here’s what’s been going on on Day 2!

Erik Sloth, a Denmark-based expert in ultrasound kicked off the morning auditorium session on the utility of ultrasound in identifying diagnoses and pathology that may otherwise be missed, although these diagnoses would not always correlate with patient or indeed gorilla-centred outcomes! (NB Erik has recently been involved in ultra sounding a gorilla as a patient). 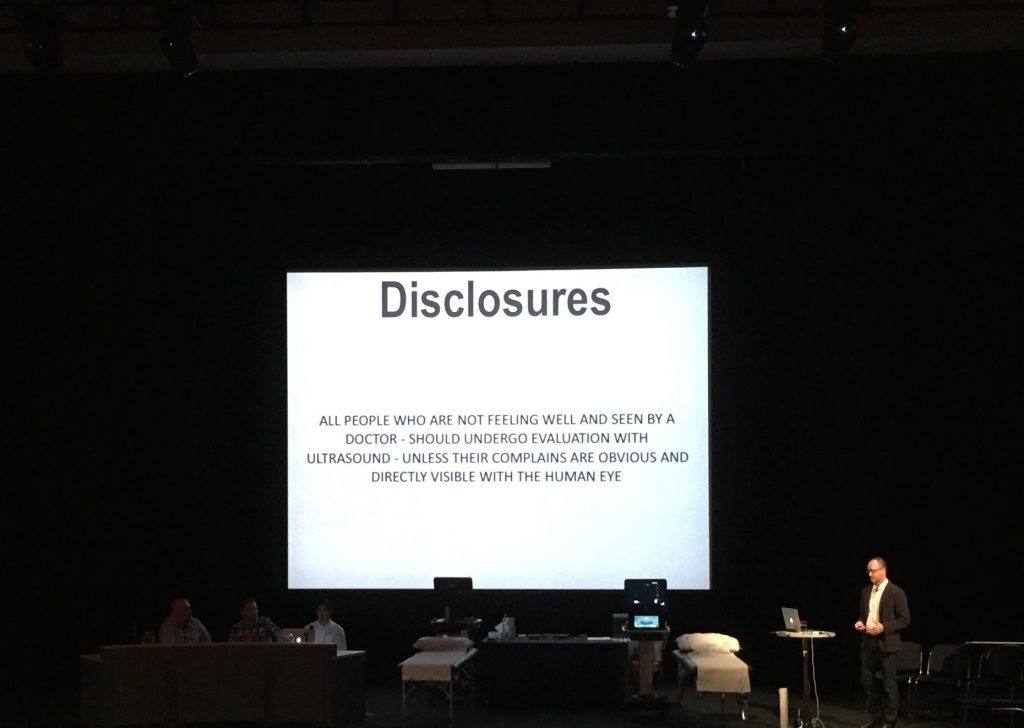 EM ethics is “messy” Tim Coats told us, in a following presentation, and we must make decisions rapidly based on inadequate information. To help us Tim presented us with a framework for making difficult decisions regarding patient care by breaking the problem down into three areas:

There is seldom a right answer and every decision involves shades of grey.

Rommie Duckworth (@romduck), a fire officer and a prehospital care provider, talked to us about mission critical communications.  Ron highlighted the dangers of suboptimal communication and the morbidity and mortality that can result.

Ron talked about the importance of having a shared mental model in handover with:

HEFT EMCAST (@HEFTEMCAST) has an excellent post on this.

Surgical Procedures at the Roadside

Gareth Davies covered this session which challenged the “scoop and run” believers. Talking about roadside thoracotomies, he pointed out that picking the right patient, with the right injury at the right time (see the slide below) 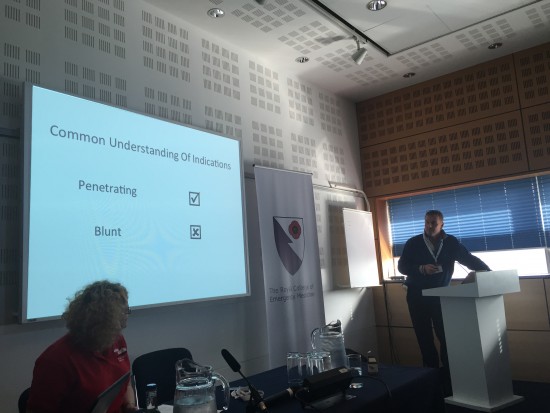 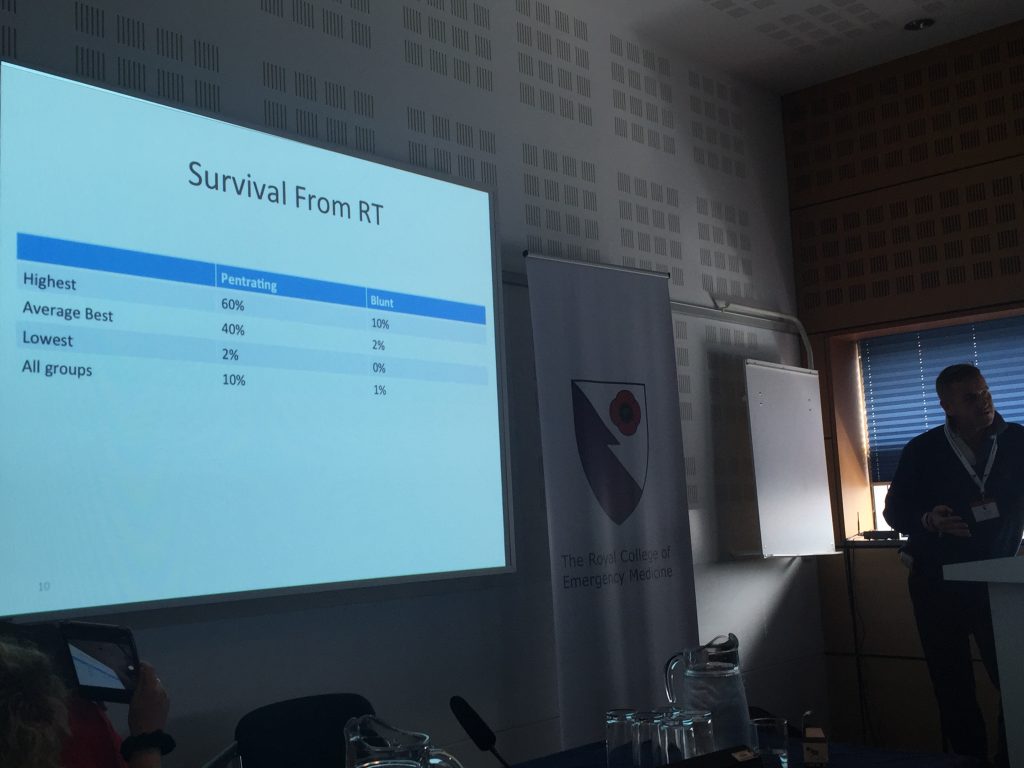 Gareth reminded us that the brain has an ischaemic time of 4 minutes so if you’re going to perform a thoracotomy time is of the essence and you need to consider if you are in or out of the window of opportunity.

He finished off the session talking about REBOA.  This was a superb session and although these procedures are rare, they really seem to define the proactive move forward of the EM clinician who can see and sort the breadth of critically ill patients and truly master resuscitation.

RCEMFOAMed’s Dave McCreary (@dmcmcreary) had interviewed him after the first roadside REBOA performed by London Air Ambulance (@LNDairamb) and you can listen to the podcast here.

The heart under stress

The Things Nobody Told You About Troponin

Troponins are either a diagnostic life saver or a pain in the proverbial depending on your perspective. The high sensitivity troponins (or low specificity troponins as they’re sometimes called) are tricky.
Rick Body (@richardbody) managed to organise this conference and pull off a cracking talk at it too. Rick has the rare combination of a world class researcher an world class presenter all rolled into one.

He had some important criticisms of the recent NICE guidelines (of which he was actually part) in particular that the 3 hr rule out advice is based more on QALY than it was on evidence.

He also advised caution with the POC assays used in a 0 and 3 hr rule out. The sensitivities just aren’t great.

Nick Mills who gave this presentation, is a cardiologist from Edinburgh and heavily involved in ACS research. His talk focused on the sex specific differences in ACS – we miss it more often in women and they seem to do worse, he said.

He talked about sex specific thresholds for diagnosing ACS. Nick is involved in the HIGH STEACS trial which is almost done which will hopefully give us some good info to add to this question.

This stream was a busy one, and the turnout seemed to have surprised the organizers who quickly had to swap the rooms around to fit those us with interest in paediatrics into the same space. 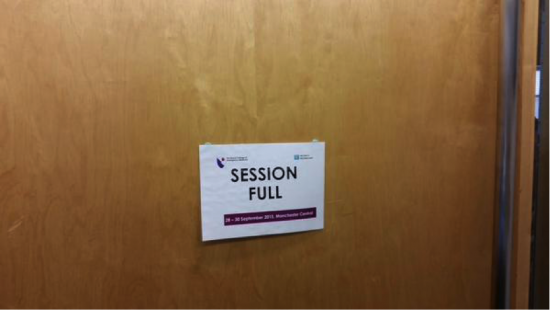 Well done to the organisers for sorting that out swiftly! Jeremy Tong (@jez_tong) spoke us about the #PaedSepsis6 updates which were released last month. The difficulty clinicians generally have with sepsis is to find the 1 child in 1,000 who will be septic, he said. The sepsis trust have now produced a toolkit to enable better identification and management of these, which I do suggest you have a good look at.

Rachel Rowlands (@rachrwlnds) followed with an inspiring talk entitled looking for learning when a child dies with helpful tips like thinking about what it must be like for families in our departments, who are given bad news. My favorite one was to think about bereavement boxes for them, with foot and hand print kits. Rachel also snuck in a helpful reminder (for those of us who aren’t paranoid about this already) that button batteries “are evil”. RCEM has endorsed the following guideline for management of button battery ingestion and this is a nifty blog from St.Emlyn’s for those who want to read more.

The ever-philosophical Damian Roland (@Damian_Roland) spoke to us about delivering quality PEM care, which he said needs to be: -Safe -Effective -Person Centered -Timely -Efficient -Equitable He also gave a small snippet of his PhD work, on competence and confidence in trainees, which reminded us very much about the Dunning-Kruger effect (see graph), and this excellent blog by Nathalie May (@_NMay) on imposter syndrome.

We look forward to having the full results for use in the ED soon.

Sepsis Sorting out the Confusion 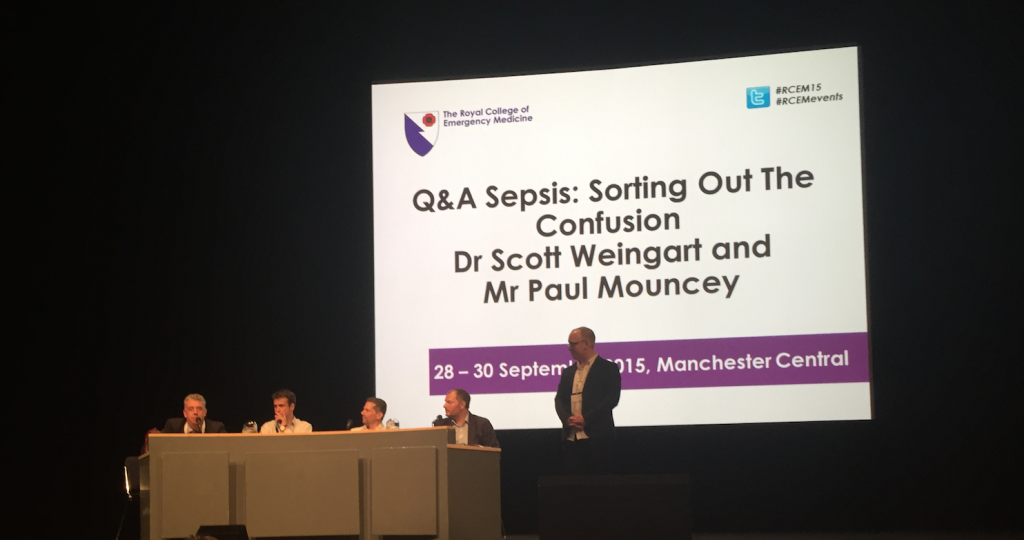 Some really interesting questions here relating to all aspects of sepsis and presumably set up as a response to the Sepsis session from SMACCUS (plug in to the HEFT EM SMACCback here).

Scott Weingart (@emcrit) talked about the safe and effective use of peripheral vasopressors when administered through a well sited peripheral IV line. He also mentioned that the utility of US for IVC and cardiac output calculations perhaps didn’t hold the utility that he and others previously believed.

What’s next for EM USS?

This Q&A session on emergency medicine ultrasound with Mike Mallin, Matt Dawson and Rajat Gangahar. The audience had lots of pertinent questions during this session; these are some of our highlights: 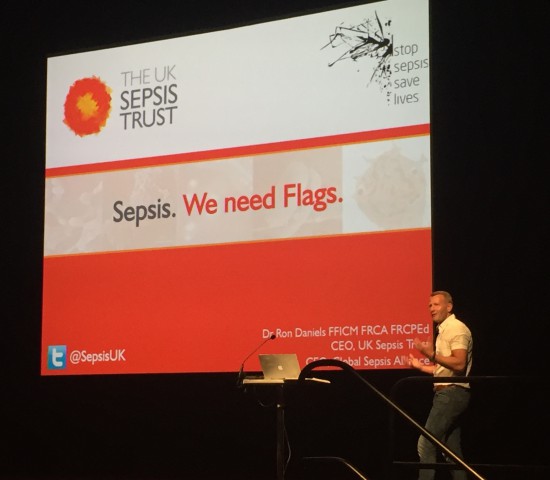 Ron Daniels spoke about the probability that signs of SIRS will be dropped shortly and other red flags will be instituted to screen for what we now think of as severe and septic shock.

He also spoke about the difficulty in meeting standards and guidelines on all patients with sepsis and talked about possible implementations such as sepsis teams in a similar vein to trauma teams.
Fluids in Resus 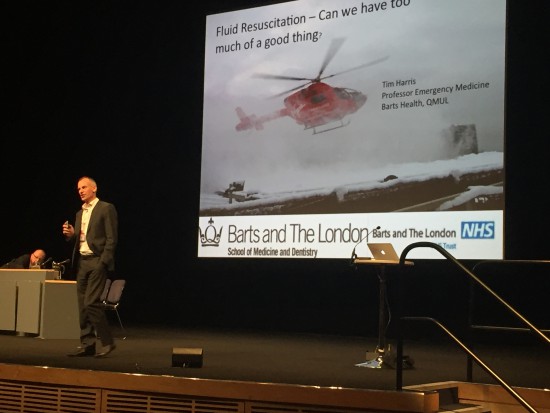 Tim Harris confessed to his “guilty pleasure” of ultrasound and how the modality should be guiding our fluid resuscitation with simple observations of cardiac motility and IVC measurement. He spoke about measuring cardiac output in resus with echo. If we are going to be trying to improve it then we should be measuring it before and after, he said. 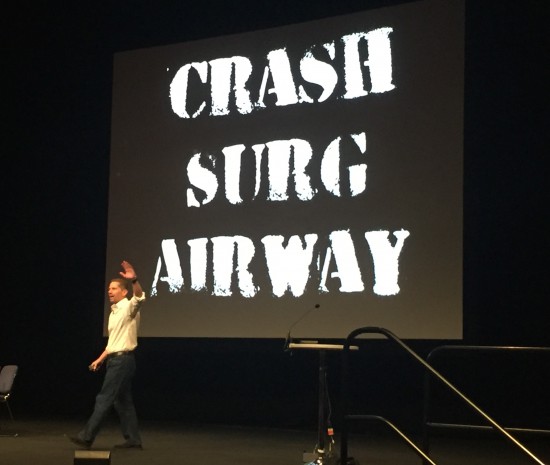 “Nobody should die without a  definitive airway,” Scott Weingart (@EMcrit) told us in a lively and entertaining talk on how not to mess up the surgical airway and be mentally prepared.

Ten ways to mess up the surgical airway, he said:

Lt. Col Tom Wooley talked us through some of the history of blood products in trauma resuscitation. How we managed to move from World Wars I & II, where they had realised the utility early of whole blood transfusion to the 1980’s and ATLS with it’s recommended initial 2 litres of crystalloid and make to today where we have moved back to blood products and research into the coagulopathy of trauma.

He concluded that in the future we need to continue research into component therapy, how we use it, and whether there are viable alternatives to be used in the early stages of the next major conflict.

The main thing to take from this talk by Emrys Kirkman and Sarah Watts was some interesting pathophysiology of coagulopathy in trauma, how it relates to tissue hypoperfusion and endothelial damage, and then a walk through of the results of their trial on the benefits of prehospital blood products to prevent coagulopathy. Interestingly in this animal model there seems to be a benefit of PRBCs alone, as opposed to with FFP. (Karim Brohi’s name may have been mentioned once or twice).

Is there a Clinical Need for REBOA?

Unfortunately Jonathan Morrison, who was originally meant to give this talk, wasn’t able to make it, but the Chair valiantly took us through his slides. There have been animal trials supporting REBOA, he said, and obviously a couple of very successful individual case reports, but conversely the largest retrospective analysis performed showed REBOA patient’s actually had a worse mortality…so the jury is still out.

Leaving you with that thought, you will have noticed that it has been a jam-packed day with some superb speakers and diverse but well founded opinions. Have a listen to the podcast for some snippets of some of the speakers and other topics of the day.