Christmas Eve. Late shift. Dr Ebenezer Scrooge, FRCEM, had just managed to escape to his office. The evening had been spent, predictably, swimming in a sea of elderly patients presenting “off legs” and teenagers presenting, erm, off legs. He couldn’t remember when he had last sat down, so paused for a moment to scroll through Twitter, before gathering his car keys to head home. No such luck, his phone started to ring….

Well who else would be answering his phone at midnight?

“I’m really sorry, we need you to come back to the shop floor. There’s been a huge fight in town. 3 ambulances and 4 police vans are on their way in. The ST6 has had to go home after sewerage from ward 1 leaked through the roof in cubicle 8 again and the ST1 is in a panic ‘cos he hasn’t been signed off for his DOPS on taser barb removal.”

“Ok, I’m on my way” he growled, reluctantly.

“Bah humbug!!! Cancel everyone’s breaks! Put away the tea trolley! Take down that bloody Wellness poster in the toilet. Christmas is cancelled!!”

And with that he slammed his office door (or tried to – flippin’ door closers) and started to run downstairs, tripping over the big yellow wet floor sign and falling headlong to the bottom.

When Ebenezer came to, slowly and painfully, at the bottom of the dark stairwell, a bearded man was stooped over him.

“Retired. Yes” said the man “but I’m back, just for tonight”.

Although Ebenezer was always glad to see his mentor and friend, who, although indeed retired, was destined to live a life endlessly wandering the corridors of the local medical school, he was a little puzzled.

“I’m back to give you a chance to avoid a terrible future” Jack said, mysteriously.

“Tonight you shall be visited by three spirits,” fat chance, thought Ebenezer, I’m on call). “Take heed of what they reveal to you. It’s your only chance.” And with that, Jack turned and left.

Ebenezer got up off the floor, shaking his head and wondering what on earth his old friend was on about.

“Cracked,” he muttered as he wandered towards the ED. “He’s finally cracked”.

Suddenly, a bright light and whirring sound filled the air.

“Great!” he thought aloud. “Just what we flippin’ need. A helicopter!” But no…the light and the noise was coming from a strange apparition, gradually coming into focus in front of him.

Ebenezer glanced around, expecting to see some of the team hiding, ready to laugh at him, but there was no-one around.

“I’m going to show you how things were, long, long ago” said the apparition, waving him along the corridor.

Always ready for anything, Ebenezer followed. They turned a corner and entered a small, but very busy waiting room. People were everywhere, holding bloody tea towels and vomit buckets. Some were asleep on the floor, others sat with small children on their laps, looking terrified. A sign above reception read “waiting time 8 hours 30 minutes”.

“Woah!” said Ebenezer “What about the breaches??”

“This is before the existence of the 4 hour target time,” explained Casualty, casually. “People wait forever. There’s little motivation for hospitals to put money into emergency departments or any stimulus to improve staffing or care pathways. That triage nurse over there? She’s working out her notice. She’s moving to gynae next week. That harassed looking bloke in the corner? That’s the senior doc on shift. He’s a surgical SHO and can’t wait for his placement to end. EM is still a very young specialty. There’s no College yet and training is finding its feet. Things might feel bad right now, but things were a whole lot worse in years gone by”.

“You’re telling me!” mumbled Ebenezer under his breath, as he stepped over a comatose teenager in a pink shell suit and followed Casualty out of the waiting room.

He found himself alone in a long, dark corridor.

“Well,” he said, “that was a bit weird. Maybe I’m more tired than I thought? I’d better crack on though, that taser barb isn’t going to remove itself!” and off he went, in search of the ED.

However, the corridor was very long, and very dark. Longer and darker than he remembered it. Much longer and darker. Which was a bit strange. He stopped for a moment and turned around, wondering if he’d got lost. Behind him stood a strange figure, almost translucent, hovering just off the ground.

“I am the Ghost of Christmas Present” it announced, proudly.

“Really?” said Ebenezer, wondering if this was what “burn out” was all about.

“Yes! But you can call me Ed. Come on, we’re going to go and see what goes on when the boss isn’t looking”.

“Now you’re talking!” said Ebenezer, following on behind. He found himself in the staff coffee room, which was eerily quiet.

“Yeah, breaks were cancelled, remember?” Ed reminded him. “That Christmas cake? Sister Cratchit baked it, but they’re not going to get chance to eat it tonight”.

Suddenly, they were in resus. Ebenezer could see the ST3 sat at the bedside of an elderly lady.

“He can’t hear you” explained Ed. “Can’t see you, either, so you can stop waving at him like an idiot. Yes, there are people waiting to be seen, but this lady is dying. Your ST3 is holding her hand as she’s scared and has no relatives. See? It’s not all about the numbers”.

“No…” murmured Ebenezer, remembering the days when he, too, used to do things like that. “Can’t she move to the ward? She needs a nice, quiet cubicle.”

“Yes, she does, but the hospital is full. No bed for her tonight. Ambulances are queuing out the door.”

“Time wasters?” Ebenezer said, hopefully. “Can they all go see their GP?”

“Actually, no, that’s a bit of a myth. Most of them actually need to be in hospital. The population is growing and people are living longer. It’s not rocket science.”

“So we need more staff.” Ebenezer said, decisively, thinking about the pile of locum CVs on his desk.

“Yes..” said Ed, “but what we really need is beds. Many more beds. That’s what I’ve asked Santa for. Speaking of which, he’s on his way, so I’m off!!” and with that, he disappeared.

Ebenezer found himself back in the corridor, feeling a little dazed. He wasn’t hugely surprised when another ghostly apparition appeared in front of him.

“I think I’ve got the hang of this now,” said Ebenezer, wondering if he was ever going to get home tonight. “You’re going to tell me how awful the future looks? I can already imagine – the department will be run by Productivity Managers, making sure everyone sees their minimum number of patients per hour; Triage will be replaced by a Seriousness Assessment – home you go if your problem isn’t serious enough; There’ll be a list of prices at the front door – £48 to have your Troponin sent, £65 if you want an ECG too; We’ll all be working ’til we’re 70 and Baby Shark will be playing on loop in the kids’ area”.

“Sadly you might be right about Baby Shark..” pondered the apparition. “But the rest – who knows? The future’s not written yet, you muppet!! Yes, things are a tad crappy, but there’s a whole lot of great stuff going on too! You have a team of caring, hardworking individuals. Your trainees are engaged and committed not only to their own learning but to sharing the great ideas they have to improve quality of care. Your staff is a fab mix of multidisciplinary folk – docs, nurses, PAs, ACPs, physios, GPs, all bringing their best to the department. All over the country EM is going from strength to strength, led by a Royal College who listens to its members and lobbies for its patients. Yeah, things could be better, but they could be worse! The future is up to you emergency physicians!” and, with a puff of smoke (which smelled a little like candy floss flavoured vape liquid) it was gone.

“Well,” thought Ebenezer, feeling a little more optimistic about the future “better get back to work. Right after I’ve booked in for a CT head”.

Merry Christmas, one and all!

This blog is dedicated to all of you working Christmas Day with, or without Ebenezer. Send us your pictures of you and your team – use #rcemxmas on Twitter! 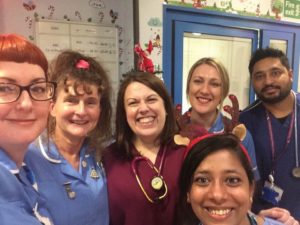 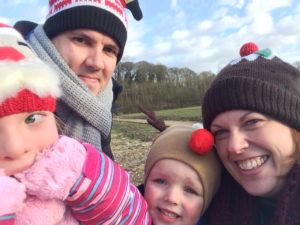