Down’s syndrome wasn’t ever a topic I thought I’d need to learn a huge amount about. I knew the basics: learning difficulties, congenital heart disease, happy, loving people who like music…right?? Then Amy came along. My beautiful, stubborn, funny daughter tipped my life upside down. She is now nearly 12 and has had a rocky road. She’s taught me a great deal about life, love, priorities and values. She’s also helped me learn some valuable lessons as a clinician, particularly with regards to assessing and managing children with Down’s Syndrome.

In the UK we have until recent years used the term Down’s Syndrome. The US and Australian terminology is now creeping in; Down syndrome (Down neither owned nor had the condition). Does it matter? Probably not. What does matter is that people with Trisomy 21 are people first.

Amy is a girl who has Down syndrome. She is not a Down’s girl, or even a Down’s. 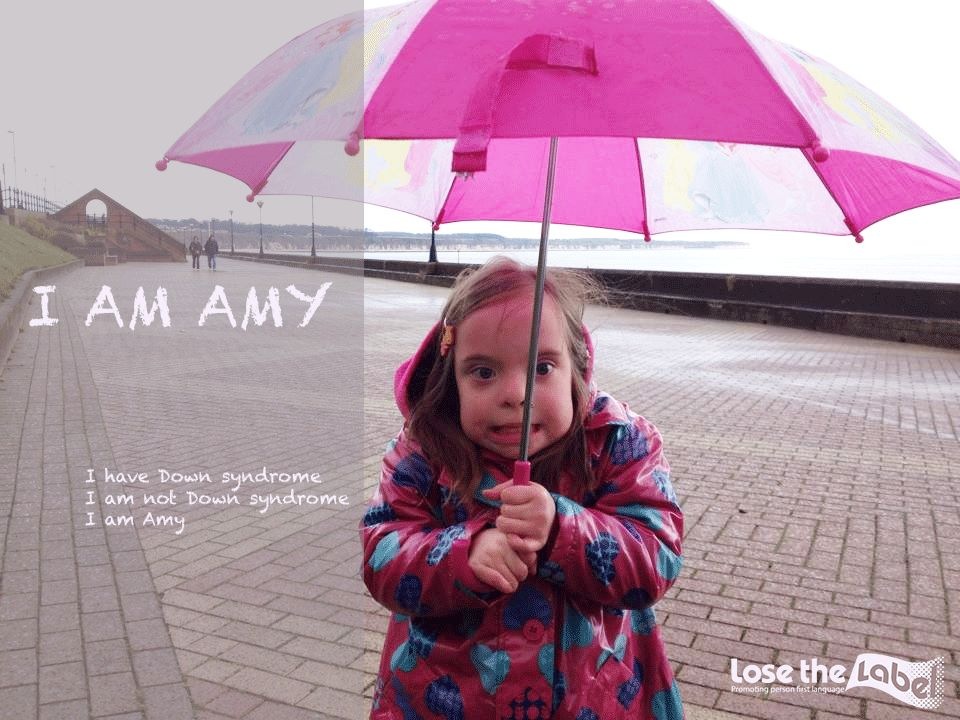 Down syndrome is almost ubiquitously talked about in negative terms by the medical profession. Prospective parents are advised to have screening to assess the risk of their baby having Down syndrome. Now that I have Amy I can say that there is nothing negative or risky about her. She can be bloody-minded sometimes and throw one hell of a tantrum, but that’s as far as it goes! Why don’t we talk about the possibility or chance of having Down syndrome, then give parents the information to make their own minds up?

This might seem insignificant, but it’s a touchy subject for parents of children with Down syndrome. Keep those parents on the right side and use the right phrases. Parents of children with additional needs are used to fighting for everything with everyone. Get off to a good start by showing them you see their child as a child, not a chromosomal abnormality. For more read this.

Children with Down syndrome often have plenty of comorbidities. Up to 60% will have some form of congenital heart disease, AVSD being the most common. Pulmonary hypertension is also common. These will of course impact how children respond to even simple infections.

Gastro-intestinal problems are frequent, accounting for 20% of hospital attendances for children with Down syndrome. Tracheo-oesophageal fistula (as opposed to the other type of TOF – beware abbreviations!), duodenal atresia and ano-rectal anomalies are usually corrected in the neonatal phase, but milder versions may slip through baby checks. Hirschsprung’s is common, as are other forms of constipation, feeding difficulties, gastroesophageal reflux, and coeliac disease.

Respiratory infections are very common in children with Down syndrome, and are often more severe than in the general population. Smaller airways and tubes together with thicker and more copious secretions are not a great combination.

Children are often on prophylactic antibiotics (Amy had daily amoxicillin for a couple of years).   These infections may need more intensive treatment and longer hospital stays than in other children.

People with Down syndrome are generally far more susceptible to infection than other people. The reasons for this are largely unclear and often multifactorial. I remember well when Amy first developed the chicken pox rash. I shrugged my shoulders and thought “Well, there’s a childhood infection to cross off the list”. Two days later she was in a helicopter on her way across the country to the nearest available PICU bed. I’ve never been so scared and so aware of the truly important things in life (massive, massive thanks to all who cared for her so well both in Hull and at Alder Hey). Immunology tests after her recovery showed she had an impaired response to all her childhood vaccinations,  which have since been repeated.

Infections often present in fairly non-specific ways – diarrhoea and vomiting might not be due to gastroenteritis. A full, thorough examination is needed to exclude other sources of infection.

Musculoskeletal conditions present a challenge. People with Down syndrome often have hypotonia and poor gross and fine motor function. This, along with sensory processing difficulties (over or under-appreciation of pain), and communication problems make assessment very difficult. Ligamentous laxity and joint instability can cause issues, plus some non-trauma-related conditions are more common – SUFE, Perthe’s, osteoarthritis, inflammatory arthritis plus conditions such as talipes and flat foot. Amy had bilateral talipes and a very unstable hip. She never even flinched, although I could feel it clunking in and out of joint as she moved when she was little. After several operations her gait is still very unstable and she wears supportive boots with special insoles.

People with Down syndrome are also at risk for neurological conditions secondary to cervical spine instability. Amy has some atlantoaxial instability which occurs in up to 20% of children with Down syndrome. Only about 1% are symptomatic and identifying those at risk is difficult. Plain films have poor predictive value. Symptoms of instability can develop insidiously or acutely – beware the child who has new onset weakness, a deteriorating gait or who has started to wet themselves after being dry. The potential for instability also needs to be remembered when performing airway manoeuvres.

Terrified yet?? For more see this.

It can be really difficult to assess severity of illness in kids with Down's Syndrome. Twitter has been awash with tragedies of Jack Adcock, Krishan Saujani & #BawaGarba – now refresh your memory. Infographic produced with @Lizjl78 Download PDF at https://t.co/80bZ6qgmJ0 #FOAMEd pic.twitter.com/0p8Xb3pOU0

Getting the best from your assessment

Children with Down syndrome have a particular learning profile. They do not have a global developmental delay. They have relative strengths in empathy and social understanding. 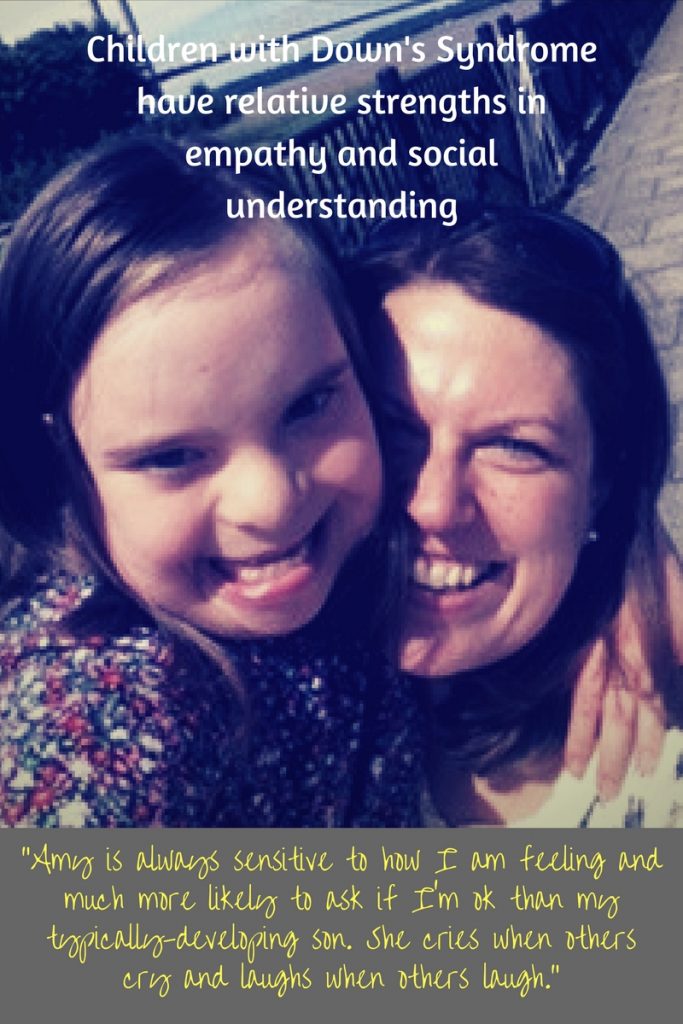 For many reasons, children with Down syndrome tend to have a specific delay in speech and language, over and above that expected for their level of learning disability. Their motor function isn’t great and they usually have large tongues in relation to their mouths so forming words is difficult. There is often a fluctuating hearing loss and auditory short-term memory is poor. You can’t learn words or language if you can’t hear or remember what you’ve heard. Speak slowly and clearly, with good eye contact. Simple sentences are easier to remember and respond to than complex questions. There may be a sensory processing delay, particularly with regards to hearing, so when asking a question give the child time to process what they have heard and formulate a reply. This often takes several seconds. Understanding is usually way ahead of their speech and language abilities, so they will have understood more than they let on.

Visual learning is a strength. Amy is a fluent reader although she is not able to write anything more than her name. Make the most of this strength by using visual aids to help understanding. Simple gestures or even sign language such as Makaton (which is built largely around gestures) is great, as are pictures and photos.

Here’s  some free Makaton resources, plus links to further training if you’re interested.

Many children with Down syndrome have sensory processing issues and are very wary of new or unusual things. A significant proportion will also have autism, making this even more of an issue. Explain what you are going to do in simple terms. Things such as stethoscopes, sats probes, BP cuffs and oxygen masks can by terrifying. These children often spend far more time than is healthy at healthcare appointments. Their visit to the ED will come with a lot of baggage. Previous bad experiences of being examined or having blood tests for example will make your job trickier. Amy has the strength of 10 men when someone tries to take blood from her, plus her veins are terrible (and the poor clinician has the worry of a doctor mum nearby). Make it less difficult for the next clinician in line by keeping things as calm and friendly for the child as possible.

For more on the learning profile see here. 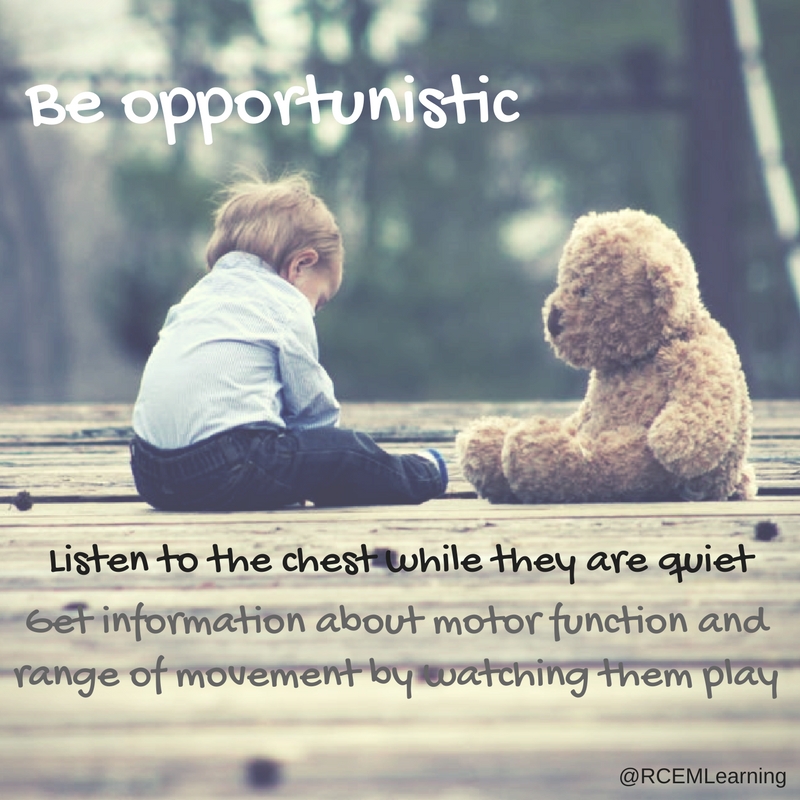 As with all children you need to be a little opportunistic – listen to the chest when they are quiet, observe motor function and range of movement during play, and get as much information as you can from watching.

You also need to be thorough though. As infections can be significant and present atypically, you need to hunt for them. Explain things where necessary and leave scary stuff like the ENT examination to the end.

These children are not daft!! Amy has a fantastic knack for distracting people from things she doesn’t want them to do. She will charm them, make them laugh and defer the unwanted intervention for ages.

Children with Down syndrome are not great at controlling their temperature. They will often not mount a pyrexia, or may even be hypothermic with infection.

Similarly their control of systemic vascular resistance tends to be poor. Parents will tell you their child often has “corn-beefy” legs and becomes very mottled in cool temperatures. The important thing is to put your findings in context with everything else.

A well-looking child, smiling and waving, with normal observations and no other abnormalities on examination except for those legs, is probably well. A child who is not interacting with you, is tachycardic or tachypnoeic for example, probably isn’t.

From personal experience (and I can find nothing in the literature about this), children with Down syndrome seem to develop petechiae far more often than other children. When Amy was tiny I only had to look at her funny for her to come out in a large crop of little non-blanching red spots. After her third set of negative cultures and normal bloods I started to become a little more relaxed about it. Many other parents I have met have said the same. Again, context is all important.

As a doctor and a mum, I know that parents can be flipping hard work. But I also know that parents know their child best. You cannot begin to assess a child with complex health problems without knowing what is normal for them. Do not be embarrassed to ask – parents won’t take offence and will appreciate you recognizing their experience. In particular, hypotonia and reduced level of responsiveness can be red flags if not usual for that individual child.

Parents of children with additional needs spend a lot of time at healthcare appointments. If they have been worried enough to bring their child to the ED, we should certainly be worried too.

Don’t fall into the trap of thinking the symptoms and signs you’re faced with are due to the Down syndrome. If you do this you are certain to miss significant illnesses. Most people with Down syndrome are, on a day-to-day basis, fit and well, despite their potential to become seriously unwell.

This document covers FAST, Assessment of the Abdominal Aorta and IVC, Vascular Access and Echocardiography in Life Support.

PREVIOUSStuck in the Ear!
BACK TO POST
NEXTI’m not burnt out, I’m just tired