Coffee is the tonic that most of medicine and research revolves around.  You only need to join the queue at your hospital coffee shop to understand the bond between healthcare and coffee.  Even non-coffee drinkers get this (and no doubt secretly snigger about it, teabag in hand).

When it comes to coffee I am not that hard to please.  If offered a cup I’d say yes to just about anything.  Black, white, instant, ground, sugar, no sugar.  I suspect most coffee drinkers would probably look down on me (and it was probably a bad idea to bring this up so early into this post).  In my defence, if I have a choice, I like a Starbucks Latte.

Oddly enough, although Starbucks sources beans from nine African countries (Rwanda, Uganda, Tanzania, Ethiopia, Kenya, Burundi, Zambia, Cameroon and the Democratic Republic of Congo), they do not operate a shop in any of these.  No, instead Africa’s first Starbucks opened its doors in April 2016 in South Africa.  And so today, I can pick up a Latte for approximately R27.00 (in South African currency) – or $1.95 in United States currency* (using a peachy exchange rate of R13.80 to the dollar).

And yet, this is not the price I would pay for a Latte at the world’s first Starbucks.  Nope, in Seattle (named for the settlers that came for the rain but settled for the coffee**) a Latte would cost approximately $2.95 – a whole dollar more than in South Africa.

I like to refer to this anomaly as the $1 coffee gap – an affront to American coffee drinkers everywhere, or is it?  This anomaly’s formal name is the Purchasing Power Parity index.(1)

The Purchasing Power Parity index is the reason it is cheaper to buy coffee in South Africa versus the United States of America – which ought to be great for South Africans, but isn’t.  The index describes the deviation from purchasing parity between different countries.  Let me explain.

So why am I telling you about coffee prices in a medical blog?  Well for one thing, the Purchasing Power Parity index applies to more than just coffee.  It applies to article access charges as well.

When was the last time you searched for a reference, found it and then hit a paywall?  Then checked your library access and found that it didn’t subscribe to the journal.  Then frantically searched for an archived copy on Google.  Then thought about emailing the corresponding author.  And as hope started to fade of you ever accessing it, you ended up faced with a similar dilemma to the moment just after being served your Starbucks Latte: chocolate or cinnamon sprinkles? Purchasing access or abandoning the reference. Bummer.

Now imagine you were South African and faced with the same dilemma.  On top of that you’ll need to account for the $1 coffee gap too.  As an upper-middle income country there would be no waivers or meaningful discounts.  Abandoning the reference would sound a lot more attractive if it just wasn’t so depressing.

Like other low and middle income regions, Africa look towards the West to help with evidence-based answers; by translating Western evidence for local use.  This would of course be much easier if the price tag wasn’t so high.  And it is fairly high.

The Purchasing Power Parity index gives us a hypothetical perspective of that price tag.  In the figure 1, I reverse engineered the article process charge of a high impact emergency care journal to give you an idea of how the cost of access appear from a low or middle-income country perspective. 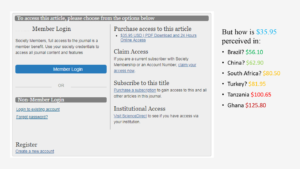 Woke is the process of being aware of and actively attentive to important facts and issues especially issues related to racial and social justice.  Research has shown us that one in every five of the top 100 cited emergency care papers of the last five years is not accessible other than by purchasing access.

Imagine setting out to build a brand new emergency care knowledge economy, but you are economically disadvantaged, the system set up to help poorer regions with research access is fairly ineffective and every fifth paper you need costs an arm or a leg.(5,6) It is little wonder that SciHub (a Robin Hood-like, online library where firewalled papers are made available free of charge in contravention of journal copyright) originated in a middle-income country.(7)

The real purpose of your research

The real purpose of doing research is not so much to create something new – it is that too – but more so it is to change the world for the better (a little bit like coffee on a night shift).  I have no doubt that as a researcher you are super keen to contribute something important and meaningful to the United Kingdom.  I wrote this blog to tell you that you can contribute something important and meaningful to faraway places you cannot imagine. But only if it is accessible.

So where to start?  You can begin to change the one in five statistic by ensuring that you always publish open access.  This can be through paying an open access charge during the publication process (budget for this before you even start your research).  If this is a little steep for your pocket consider publishing in journals that allow immediate archiving after formal publication.

Keep track of your global research impact using Impactstory.  Impactstory is an open-access platform that helps researchers explore their online impact with respect to access, reach, readability, etc. It is linked to your twitter and ORCID account – If you do not have an ORCID account yet, then open one today.  Then link it to your Impactstory account. 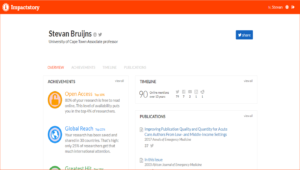 It takes a little getting used to, but like collecting your used Nespresso pods for recycling, you do get used to it and it really does matter.  As an extra bonus you will be rewarded with increased dissemination and citation of your work (bet you didn’t know that either).(8)

Now what’s not to like.  I think it’s time for a coffee.

** I’m messing with you. Seattle was named in honour of Chief Seathl of the Duwamish and Suquamish tribes who lived near the area where the city now stands.

Research in Emergency Medicine training: one straw too many?

Emergency Medicine (EM) is demanding and the current challenges are daunting. Already, our education is too often side-lined in order to prioritise patient care. Why should we even consider research?