Intestinal obstruction is an important cause of the acute abdomen, accounting for up to 5% of emergency admissions to surgical services. Intestinal obstruction can be classified in several different ways, most traditionally into small and large bowel obstruction. Mortality varies widely according to cause and any associated complications, being 100% in patients with untreated strangulated obstructions1. Morbidity and mortality are particularly high in patients who are managed incorrectly or in whom the diagnosis is delayed,2.

The causes of intestinal obstruction can be broadly divided into mechanical or functional categories, and further subdivided in the following table2:

The most common causes of bowel obstruction are:

In one prospective observational study of 150 consecutive adult patients admitted with acute mechanical bowel obstruction, 114 (76%) presented with small bowel and 36 (24%) with large bowel obstruction. Adhesions (64.8%), incarcerated hernias (14.8%) and large bowel cancer (13.4%) were the most frequent causes of obstruction.4

Adhesions are the commonest cause of mechanical bowel obstruction.

Innervation of the intestine is via the parasympathetic and sympathetic nervous systems which form a myenteric plexus. This plexus controls orderly, propulsive contractions of the muscular layers of the gut wall. The sympathetic nervous system mediates the sensation of visceral pain (typically poorly localised, periumbilical and colicky in nature) experienced when the gut contracts against an obstruction.

Intestinal obstruction refers to any form of impedance to the normal passage of bowel content through the small or large bowel. As such, universal findings irrespective of aetiology can be demonstrated in the flow diagram below. 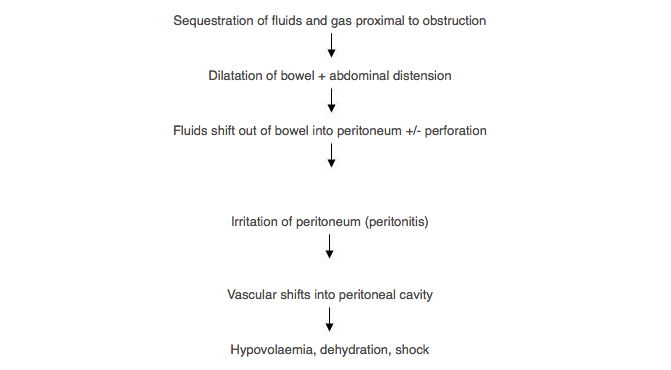 Fluid losses are generally greater the more proximal the obstruction. This is because fluids secreted by the upper gastrointestinal tract fail to reach the absorptive areas of the distal jejunum and ileum. Sequestration causes tissue injury, inflammation and capillary leak, manifest as local oedema at the site of injury.2 Such third-space losses can be large and frequently under-estimated, particularly if the obstruction is prolonged.

Adhesions are thought to result from a reduction in peritoneal plasminogen-activating factor (PAA), which in turn leads to a failure to break down the postoperative fibrinous adhesions that follow all intra-abdominal operations. Drying and abrasion of the peritoneum as well as foreign substances such as talc in surgical gloves increase the reduction in PAA, increasing the future risk of adhesion formation.6

Small bowel can become trapped in a pre-existing hernia, causing obstruction. Hernias can be classified in the following table:

Functional obstruction results from atony of the intestine and loss of normal peristalsis. Atony of the bowel can be localised to a particular segment or generalised throughout the entire bowel. Localised atony is thought to result from an abnormality in the myenteric plexus of the bowel wall, whereas more generalised atony probably results from an imbalance in autonomic nerve supply, although there is little direct evidence for this.[9,10]Different terms are often used to describe functional obstruction of the small or large bowel: paralytic ileus and pseudo-obstruction respectively.2

Initial assessment of the patient should involve concomitant history taking with prompt identification of the shocked patient. Generic treatment incorporating analgesia and fluid resuscitation should be performed alongside the initial history and examination.

Severe pain suggests strangulation and developing ischaemia in a closed loop of bowel.3

Severe pain in bowel obstruction suggests complications such as ischaemia or perforation.

Begin with baseline observations looking for any physiological evidence of dehydration or shock. Adequately expose the patient to examine the abdomen meticulously, looking for surgical scars, peritonism, masses and not forgetting the hernial orifices.13 It is easy to miss a small femoral hernia in an obese patient.11 Bowel sounds may be high-pitched / tinkling or absent altogether. Careful attention should also be made to look for other causes of the acute abdomen, in particular a ruptured abdominal aortic aneurysm (AAA) or ectopic pregnancy.

A rectal examination must also be performed, perhaps demonstrating an empty rectum or obstructing mass, ideally once only by the clinician making the management decisions. In the same way repeated attempts to elicit rebound tenderness should not be made when evidence of peritonitis has already been established. 12

Many surgeons would advocate that rigid sigmoidoscopy should form part of a complete abdominal examination. An obstructing lesion may be visible and a sigmoid volvulus might be decompressed.2 However, rigid sigmoidoscopy is not generally performed in emergency departments in the UK.

One prospective observational study of 150 consecutive patients with acute mechanical bowel obstruction reported that absence of the passage of flatus (90%) and/or faeces (80.6%) was the most common presenting symptom with abdominal distension (65.3%) being the most common physical finding.4 A retrospective analysis of 70 consecutive patients presenting with a clinical diagnosis of intestinal obstruction concluded that the classical signs of intestinal obstruction (fever, tachycardia, leukocytosis and local tenderness) are poor indicators for compromised bowel.14 Bohner et al reported a prospective study to determine the value of the AXR in comparison with history and examination.15 The six variables with highest sensitivity for a diagnosis of bowel obstruction were a distended abdomen, increased bowel sounds, history of constipation, previous abdominal surgery, age over 50 years and vomiting.

constipation and abdominal distension in the patient with a previous history of bowel surgery are strongly suggestive of intestinal obstruction.

The differential diagnosis of the patient presenting with abdominal pain is especially wide. The most common causes in the UK population requiring admission to hospital are:2

All patients being evaluated for small bowel obstruction should have abdominal x-rays first because of the fact that they are as sensitive as CT to differentiate obstruction from non-obstruction.13 17 Small bowel distension (>2.5cm in diameter) confirms the diagnosis, differentiated from the colon by the valvulae conniventes, which completely cross the bowel wall. The taeniae coli of the large bowel are incomplete across the bowel wall. The relatively central position of the small bowel and restriction in dilatation to 5cm also helps to distinguish small from large bowel on plain films.2 It should be noted that the use of the abdominal x-ray in the undifferentiated patient with acute abdominal pain is not recommended in the emergency department setting,17 with several studies showing that the abdominal x-ray rarely changes the management plan and is often used as a defensive screening investigation.18 19 20 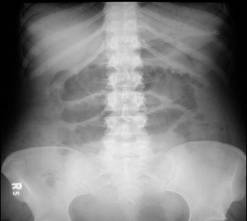 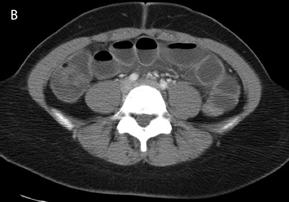 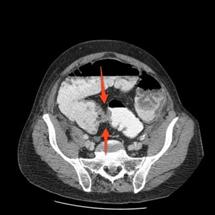 A limitation of CT is its low sensitivity (<50%) in the detection of low-grade or partial small bowel obstruction. There is a variety of literature that suggests that contrast studies should be considered for patients who fail to improve after 48 hours of conservative management as a normal contrast study can rule out operative small bowel obstruction.13 Contrast studies (barium and water-soluble) are therefore rarely indicated in the initial acute setting of the emergency department.

The abdominal x-ray is the initial investigation of choice in patients with suspected intestinal obstruction, followed by a CT scan for further evaluation and identification of the cause of the obstruction.

Broad spectrum antibiotics are commonly administered because of concerns that bacterial translocation may occur in the setting of small bowel obstruction; however, there are no controlled data to support or refute this approach.27It would seem prudent however to give systemic antibiotics to patients with signs of strangulation or peritonism at presentation.

The use of a naso-gastric is well established in order to deflate the stomach and proximal small bowel.28 There is no clear published evidence on which patient groups benefit most from naso-gastric tube placement or when such a tube should be placed in the initial management of the patient with intestinal obstruction. Furthermore, there is no additional benefit from using intestinal tubes of longer length.13 28

Involve the surgical team early in the management of the patient with suspected intestinal obstruction.

Patients with small bowel obstruction generally undergo an initial period of non-operative observation and continued resuscitation, unless there are signs of shock or strangulation at presentation when exploratory laparotomy is indicated. Care must be taken to ensure that strangulation or starvation does not occur; around 3 days is considered the limit of non-operative observation by many surgeons.2

A systematic review and meta-analysis of 14 prospective studies of the role of water-soluble contrast agent (WSCA) in adhesive small bowel obstruction reported that WSCA was effective in predicting the need for surgery (96% sensitivity, 98% specificity in predicting resolution of SBO if contrast appeared in the colon 4-24 hours after administration). In addition, WSCA reduced the need for operation (OR 0.62) and shortened hospital stay (by 2 days).29 Hence WSCA has both a diagnostic and therapeutic role in patients with small bowel obstruction.

Colonic pseudo-obstruction can be managed with pharmacological methods as well as colonoscopic decompression. Intravenous Neostigmine is the best-studied pharmacological agent, leading to prompt colon decompression in the majority of patients after a single infusion.9 10 33 However, the underlying cause should always be sought and actively treated wherever possible.

PREVIOUSChest Pain Syndromes
BACK TO POST
NEXTST Elevation without Infarction