In clinical practice the vast majority of broad complex tachycardias (BCT) will be ventricular in origin.

Ventricular tachycardias (VT) most frequently result from damage to the myocardium secondary to ischaemia, cardiomyopathy or myocarditis, or may result from the effects of drugs such as flecainide or quinidine.

Any regular BCT should be assumed to be ventricular in origin.

BCT may be ventricular or supraventricular in origin and the range of arrythmias manifesting as BCT are shown below in Table 1.

The clinical presentation, cardinal features and treatment of these arrythmias will be discussed in this module. Figure 1 shows the conduction pathways of the heart and will be referred to when illustrating the origin of various forms of BCT. 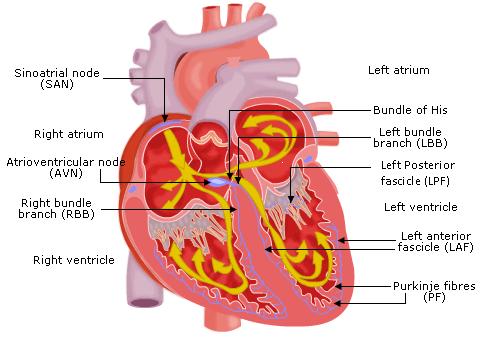 Figure 1: The conduction pathways of the heart

Monomorphic refers to a VT where each and every QRS complex is the same shape and size as the next. This form of tachycardia frequently occurs after myocardial infarction when it is a sign of extensive damage.

The cardinal features of monomorphic VT are:

As with all tachyarrythmias, symptoms depend upon the ventricular rate and pre-existing cardiovascular state. As the majority of patients with VT have either congenital or acquired heart disease sustained tachycardia often gives rise to symptoms and signs.

These symptoms and signs may be mild (consisting of dizziness or light-headedness), moderate (eg. chest pain or shortness of breath), or severe (with cardiovascular collapse or profound shock). Surprisingly, some patients with severe heart disease may tolerate sustained VT remarkably well and remain asymptomatic.

(i) Duration and morphology of the QRS complex:

QRS complexes will all have a similar shape and size with a duration of 0.12 seconds or longer. As a rule, the broader the QRS complex the more likely the rhythm is to be ventricular in origin, particularly if the complexes are over 0.16 seconds.

The rate will be 120-250 beats/minute and the rhythm regular. Rates around 150/min or well-tolerated rates above 200 beats/minute should suggest the possibility of a supraventricular origin masquerading as a VT (see below).

The axis in a VT is frequently outside the normal range (which is from -30o to +90o ) as the wave of depolarisation frequently moves in the opposite direction to normal.

A wave of depolarisation originating from the apex of the heart and moving to the base may give rise to wildly abnormal axis determinations such as a positive deflection in lead aVR (-210o ).

A monomorphic tachycardia with a positive complex in aVR suggests the axis is bizarre and is very suggestive of a ventricular origin.

If its up in aVR the axis is bizarre.

It is uncommon to identify evidence of independent atrial activity in a monomorphic ventricular tachycardia, whether this is an occasional P wave or a fusion or captured beat. However, correct identification of these features confirms a diagnosis of VT.

Monomorphic ventricular tachycardia is usually regular, has a RBBB pattern and a bizarre axis.

In any patient compromised by their monomorphic VT the treatment of choice is DC cardioversion. Signs of instability according to the Resuscitation Council (UK) include reduced conscious level, chest pain, systolic blood pressure of <90 mmHg or heart failure.

Start with a synchronised DC cardioversion at 200 joules (monophasic) or 120-150 joules (biphasic). If unsuccessful repeat the cardioversion up to a maximum of 3 attempts before giving amiodarone. Changing the pad position may be helpful in resistant cases.

In patients who are tolerating their arrhythmia, intravenous amiodarone (in a dose of 5mgs/kg up to a maximum of 300mgs) administered over 30 minutes is the treatment of choice. If unsuccessful, DC cardioversion should be considered.

Correction of any underlying abnormalities that might be precipitating the arrhythmia (eg. hypo/hyperkalaemia and hypomagnesaemia) is also required.

Polymorphic VT in clinical practice is uncommon and rarely sustained. When polymorphic VT is encountered in the acute setting it is frequently the result of an acute cardiac insult and it rapidly deteriorates into ventricular fibrillation.

As with other forms of polymorphic VT, Torsades is not usually sustained but it will recur if the underlying cause is not corrected. 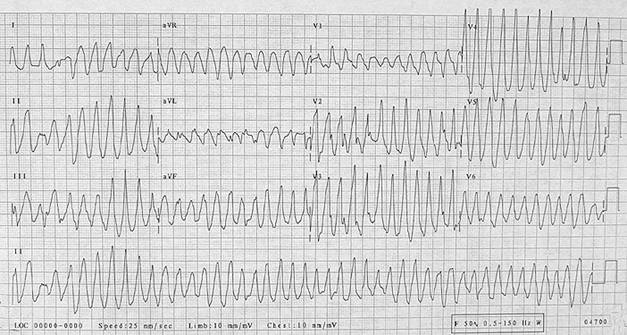 Polymorphic VT that develops in association with an acute coronary syndrome requires immediate DC cardioversion, as it frequently degenerates into ventricular fibrillation. Those patients with Torsades de pointes who are stable require intravenous magnesium and correction of underlying abnormalities (eg. hypokalaemia, hypoxia, etc.) where appropriate.

Fascicular tachycardia is uncommon. Patients frequently do not have any underlying structural heart disease and the origin of the tachycardia is the posterior fascicle (or less commonly the anterior fascicle) of the left bundle branch (see Figure 1). As the wave of depolarisation originates in specialised conducting tissue, the resultant QRS complex is of a relatively short duration (0.11 to 0.14 seconds). Consequently this arrhythmia is frequently misdiagnosed as a supraventricular tachycardia.

Fascicular tachycardia should be treated in the same way as monomorphic tachycardia. It is important to identify this arrhythmia correctly so that it is not treated as a supraventricular tachycardia: the administration of verapamil could be dangerous in this setting.

As a fascicular tachycardia originates in specialised conduction tissue, the QRS complexes have a short duration (0.11 to 0.14s) and as a consequence the arrhythmia may be thought to be supraventricular in origin.

This tachycardia originates in the right ventricular outflow track which means that the resultant tachycardia has a left bundle branch block type pattern associated with right axis deviation.

When faced with a patient with a BCT, the default position should be to assume that the arrhythmia is ventricular in origin until proven otherwise, particularly if the patient is over the age of 35 with a history of ischaemic heart disease or congestive cardiac failure. However, tachycardias with a supraventricular origin can present as a BCT when associated with aberrant conduction or a pre-existing bundle branch block (see Figures 8 and 9).

A broad complex tachycardia should be assumed to be ventricular in origin unless there are specific features supporting a supraventricular origin.

Vagal manoeuvres and adenosine (a short acting purine) may be used diagnostically (to help identify BCT which is supraventricular in origin) and therapeutically (to terminate the arrhythmia).

Detailed management of supraventricular tachycardia is discussed in a separate module.

Any irregular and sustained broad complex tachycardia should be assumed to be atrial fibrillation with either pre-existing bundle branch block or aberrant conduction (see Figure 10). It is rare for such a rhythm to be ventricular in origin. Although polymorphic VT is irregular, it is rarely sustained.

Atrial fibrillation may occasionally masquerade as polymorphic VT when it is in the presence of pre-excitation. The atrial fibrillation gives rise to an irregular rhythm and the variable conduction down the accessory pathway gives rise to QRS complexes which do change in morphology due to the presence or absence of delta waves giving a similar appearance to Torsades de pointes (see Figure 11).

Any broad complex tachycardia that is sustained and irregular is most likely to be atrial fibrillation. 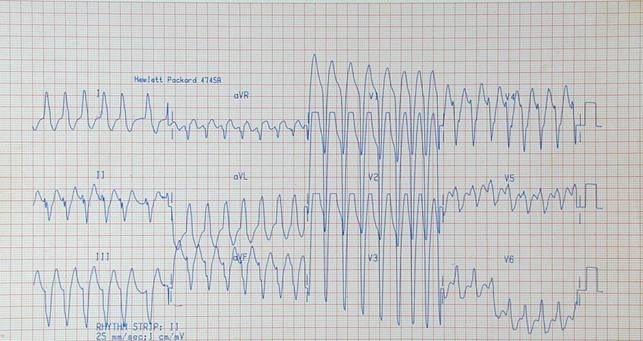 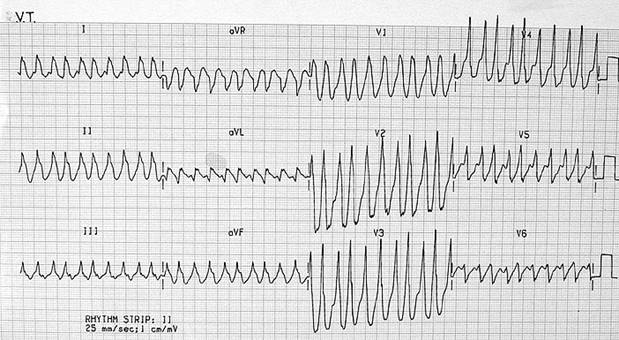