Low risk chest pain presents the emergency physician with a classic diagnostic challenge. The need to identify and treat a minority of patients with potentially life-threatening pathology (AMI) must be weighed against the need to avoid unnecessary diagnostic testing or hospital admission for the majority of patients who have benign pathology.

There is no simple solution to this challenge, and occasional misdiagnosis is inevitable, but armed with knowledge of the strengths and limitations of available diagnostic tests, and understanding of the principles of applying them to patients and populations, we can maximise the chances of providing appropriate care.

History, examination and the ECG

Clinical History: What does the evidence show?

Radiation of pain to the arms or shoulders, and association with exertion, diaphoresis, nausea or vomiting are useful for ruling in the diagnosis of AMI. Conversely, a history of pain that is sharp, positional or pleuritic decreases the probability of AMI.1

Although traditionally it has been considered that pain described as burning or like indigestion suggests a gastro-oesophageal origin, data from emergency department patients with low risk chest pain suggests that this description actually increases the probability of AMI. Emergency physicians should therefore be very cautious about diagnosing low risk chest pain as gastro-oesophageal without first ruling out for cardiac disease.2

How useful is clinical examination?

The only useful finding that is seen with any frequency is reproduction of pain by chest wall palpation, which reduces the probability of AMI but does not, on its own, rule out AMI. It is also worth noting that it is reproduction of the pain by palpation that is useful, not simply eliciting tenderness by vigorous prodding.3

The presence of hypotension, a third heart sound and pulmonary crepitations have been shown to increase the likelihood of AMI, but would not typically be found in patients with low risk chest pain.

How useful is the ECG?

ST segment deviation and deep T wave inversion indicate acute coronary syndrome with a substantial risk of adverse outcome. These changes must be identified and the patient admitted. Other changes on the initial ECG are less specific. Minor T wave inversion (< 3mm), flat or biphasic T waves may suggest myocardial ischaemia, but may also be positional or due to hyperventilation, hypertension, ventricular strain or previous cardiac disease.

Positive Predictive Value the probability that a subject with a positive test result has the condition.

New cardiac markers are frequently being developed, so we need to know how to interpret their evaluation. Cardiac markers are typically evaluated by a diagnostic cohort study in which the new marker is compared to a reference standard, such as AMI, defined by recognised criteria.

The results of these studies often focus upon sensitivity or negative predictive value to demonstrate the value of the marker (or panel of markers) for ruling out AMI, but this only tells half the story.

A new cardiac marker has 100% sensitivity and 100% negative predictive value for AMI. Will it be diagnostically useful?

Value of a Cardiac Marker

Ultimately, the true value of a cardiac marker lies in its ability to predict adverse outcome or, even better, to predict treatment benefit.

Prognostic cohort studies are increasingly used to demonstrate the value of new markers. However, it is unlikely that prognostic studies will be designed to evaluate cardiac markers specifically in low risk patients.

These patients generally have an excellent prognosis, with a 6 month mortality of less than 1%, so a cohort study would need to be unfeasibly large to identify useful prognostic value from a cardiac marker. Hence we are likely to need to extrapolate prognostic data from studies of high risk patients.

Troponin levels have been shown to predict subsequent risk of adverse outcome.

Higher levels are associated with progressively higher risk, but any elevation of troponin appears to be prognostically significant.

As Markers of Myocardial Damage

Troponins, as markers of myocardial damage, take time to rise after an ischaemic event, so blood samples taken in the first few hours after symptoms have lower sensitivity than those taken later.

However, recent data suggest that newer assays have better early sensitivity and, if a low threshold for a positive test is used, a negative troponin can effectively rule out AMI as early as 6 hours after worst symptoms in a patient with low risk chest pain.11

Certainly it seems reasonable to conclude that a patient with low risk chest pain, who has no detectable troponin in a sample taken at least 6 hours after their worst symptoms, will gain little benefit from hospital admission.11

Clinical decision rules, such as the Goldman algorithm and the Acute Cardiac Ischaemia Time-insensitive Predictive Instrument (ACI-TIPI) have been developed to risk-stratify emergency department patients presenting with chest pain.

Other risk-stratification tools, such as the TIMI or GRACE scores, have been developed in populations with acute coronary syndrome, but subsequently used in heterogeneous populations with chest pain. Despite extensive research, the clinical utility of these scores remains unclear.

Components of the TIMI score:

Components of the GRACE score: 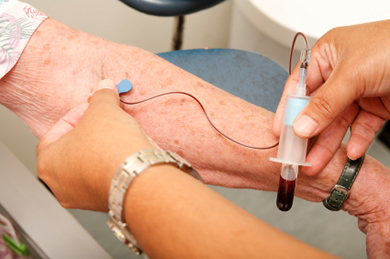 The chest pain unit is a recent development in emergency medicine that specifically caters for patients with low risk chest pain.

The unit provides protocol-driven care, often by specialist chest pain nurses, to rule out AMI and then estimate the risk of coronary heart disease.

The chest pain unit has been shown to improve outcomes for patients with low risk chest pain, and to reduce costs by reducing hospital admissions and subsequent scheduled ,and unscheduled, hospital care.

However, successful implementation of chest pain unit care appears to depend upon a number of organisational factors. If these issues are not addressed, then establishing a chest pain unit may simply attract more attendances with chest pain, only manage a highly selected minority of patients, and, paradoxically, end up increasing admissions.

Once AMI has been ruled out, the most likely alternative diagnoses are:

Anxiety is often under-diagnosed in patients with low risk chest pain. A positive diagnosis of anxiety can often be made in the presence of suggestive symptoms, such as palpitations, sweating, feelings of depersonalisation, and features of hyperventilation, such as light-headedness or paraesthesia in the lips and fingers.

Recognition that symptoms are related to anxiety, supported, when appropriate, by negative cardiac testing, is important, because prolonged diagnostic uncertainty will exacerbate symptoms and make reassurance more difficult in the long term.

As previously mentioned, the presence of an appropriately timed negative troponin in a patient with a normal or non-diagnostic ECG and low risk chest pain, risk stratifies the patient to a very low 30 day risk of an adverse cardiac event and allows safe discharge from the ED; it does not exclude coronary artery disease (CAD) as a cause of their presenting complaint.

For this, further risk stratification is required and, in appropriate patients, further investigation. Until recently, there has been no evidence-based guidance on exactly which patients require further investigation and which investigation is most appropriate. The National Institute for Health and Clinical Excellence (NICE) has recently (2010) produced Guidance on this [1]: it advises the use of pre-test CAD probability assessment for patients who have presented with cardiac-sounding chest pain and who have had an acute coronary syndrome or AMI clinically and biochemically excluded. The pre-test probability of CAD will determine the need for further investigation. Clearly this only applies to patients who are not previously known to have CAD.
CAD probability assessment can be done by the emergency physician using a combination of factors as shown in Table 1. 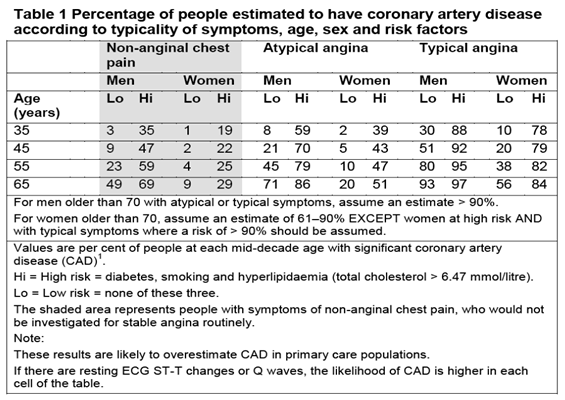 The typicality of chest pain, the patient’s age and gender, and the presence of risk factors are combined to determine the probability of CAD.
For the purposes of stratification in the Table, the typicality of a chest pain is defined as follows:

Further Investigation Based on CAD Probability

NICE further recommends that the pre-test probability of CAD determines the need (or otherwise) for further investigation as follows [1]:

These recommendations have significant implications for the UK NHS which is currently not appropriately set up to investigate these patients in this way. In particular, NICE does not recommend the use of Exercise ECG testing (which is currently the most commonly used functional test) as the functional test for patients with intermediate probability of CAD (30-60%) as it is diagnostically inferior to other functional tests such as myocardial perfusion scanning, stress echocardiography and magnetic resonance perfusion scanning. Exercise ECG testing still has a role as a functional test in patients who are known to have CAD and who present with chest pain.

NICE also recommends the use of novel investigations such as CT coronary calcification in lower (10-29%) risk patients because, if negative, it has a high enough sensitivity to rule out CAD in these patients without the need for further investigation.

The emergency physician is well placed, once an acute coronary syndrome or AMI have been excluded, to perform CAD risk stratification and refer appropriate patients for further investigation either directly (e.g. for CT coronary calcification in lower risk groups) or via their local chest pain clinic service (e.g. for functional testing or invasive angiography in higher risk groups).

Chest pain is caused by a spectrum of pathology ranging from the innocent to the extremely serious.

Back pain is common: it is estimated that 60-80% of the population have back pain at some time during their life.