It is estimated that there are 3 million people in the UK with COPD [2].

COPD cases comprise over 1 million hospital bed days every year in England [1]. 1 in 8 medical admissions are secondary to COPD [3]. This group of patients will commonly present to the Emergency Department when they suffer an exacerbation of their disease.

COPD is believed to be the only major cause of death whose incidence is on the rise in the UK and Britain has one of the highest death rates from this condition in Europe [3].

There are approximately 30 000 deaths/ year attributable to COPD [1].

It is therefore vital that the Emergency Physician has a good knowledge of COPD and its management in order to improve its associated morbidity and mortality. It is also important to recognise which patients may be safely treated in the community to avoid unnecessary admissions.

This session aims to outline the management of COPD relevant to the Emergency Department. In particular with reference to the evidence based guidelines published by the National Institute of Clinical Excellence in 2010 [4].

COPD is a respiratory disease characterised by airflow obstruction that is not fully reversible.

Airflow obstruction is defined as a value of <0.7 when a ratio of the FEV1 (Forced expiratory volume in 1 second) / FVC (Forced vital capacity) is measured.

A diagnosis of COPD should be considered in a patient over the age of 35 who presents with exertional breathlessness, cough, sputum production, wheeze or frequent winter bronchitis in the presence of risk factors [4].

Traditionally within the diagnosis of COPD there were considered to be two main subtypes, namely chronic bronchitis and emphysema. COPD is now the preferred term for all with the disease.

An exacerbation of COPD is defined as a worsening of the patients symptoms beyond their normal day-to-day variability. They will often have worse breathlessness, cough, increased sputum production and change in the nature of their sputum. Additional medication will usually be needed in order to treat the exacerbation.

COPD is a respiratory disease characterised by airflow obstruction that is not fully reversible.

A diagnosis of COPD should be considered in a patient over the age of 35 who presents with exertional breathlessness, cough, sputum production, wheeze or frequent winter bronchitis in the presence of risk factors [4].

Chronicairway inflammation, triggered by the presence of pollution orcigarette smoke in the lungs, is thought to be key in COPD pathogenesis.

During an exacerbation of COPD there is an acute increase of inflammatory mediators which accelerate tissue damage [5].

This chronic versus acute inflammatory pathology may explain why patients experience a gradual decline in lung function over time, and worsen with an increased number of exacerbations

These changes cause increased airway resistance and expiratory airflow obstruction, which increases the work of breathing and reduces minute ventilation, potentially leading to hypercarbia. Airway destruction results in hypoventilation and ventilation/perfusion mismatch which causes hypoxaemia.

Most COPD exacerbations are due to viral or bacterial infections of the respiratory tract, however in some cases they are caused by environmental pollution. Up to 30% have an unknown aetiology [5].

The main known causes [7] are as follows:

While infection is by far the commonest case of an acute exacerbation of COPD it is important to consider other causes such as:

Most COPD exacerbations are due to viral or bacterial infections of the respiratory tract, however environmental pollution may also trigger an exacerbation. Up to 30% of exacerbations have an unknown trigger.

Common presenting symptoms to the Emergency Department for patients with an exacerbation of COPD may be:

Patients will often have an established diagnosis of COPD but there will be a proportion who have not been formally diagnosed so it is important to consider the diagnosis in those >35 years with risk factors for the disease.

Other important aspects of the history to consider are:

Important aspects of the clinical examination to note:

There is no one single test that can confirm a diagnosis of COPD.

In addition to a relevant clinical history and spirometry, at the time of initial diagnosis the patient should undergo the following investigations [4]:

Additional investigations to consider depending on individual factors may be [4]:

Investigations that should be performed in the ED when a patient is presenting with an exacerbation of COPD include:

Arterial blood gas analysis should be performed on arrival in patients who are breathless with acute exacerbations of COPD.

The National Institute of Health and Clinical Excellence has published guidance on factors that should be considered when determining the most appropriate place for the treatment of patients with exacerbations of COPD (see Table 2).

Table 2: NICE 2010 Guideline. Factors to consider when deciding where to treat the patient [4]: 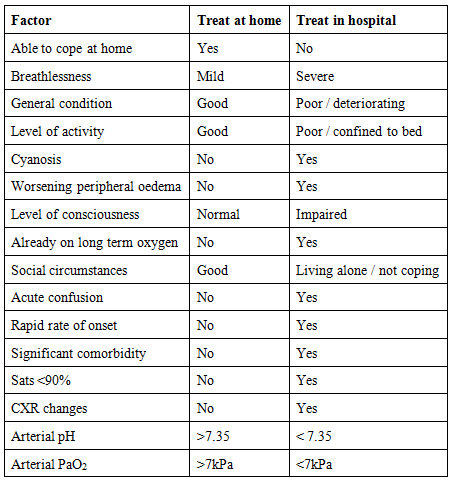 Corticosteroids should be given to all those admitted with an exacerbation of COPD and to those being treated at home where their symptoms are affecting their activity of daily living.

Antibiotics should be given to patients with an increase in purulent sputum, consolidation on CXR or clinical signs of pneumonia [4]
Empirical antibiotic therapy should be with aminopenicillin, macrolide or tetracycline unless local microbiological policy states otherwise [4]

Antibiotics should be given to those with purulent sputum or those with clinical signs of pneumonia or CXR changes.

NIV is the preferred initial mode of ventilation to treat acute respiratory failure for patients with an acute exacerbation of COPD. NIV improves oxygenation and acidosis, decreases respiratory rate, work of breathing and severity of breathlessness.

The British Thoracic Guidelines 2008 state that NIV should be considered within 60 minutes of hospital arrival in all patients with an acute exacerbation of COPD in whom a respiratory acidosis persists despite maximum medical treatment.

GOLD strategy 2018 Indications for NIV include:

Those patients who are hypercapnic despite optimal medical therapy should be considered for NIV.

Indications (as per Global Initiative for Chronic Obstructive Lung Disease 2018):

Hospital at home and assisted discharge schemes are safe and effective and should be considered for whose who would otherwise require admission.

One cohort study [14] has shown that predictors of increased mortality in COPD include:

A further UK audit [15] has shown death in 14% of patients admitted to hospital within 3 months of admission. The most important prognosticators for death in this group were:

The 3 marked with * were the 3 major independent predictors of mortality.

Dyspnoea is an overall term used to describe an unpleasant awareness of increased respiratory effort and will be used synonymously with "breathlessness" in this session.