This session focuses on community acquired pneumonia (CAP), which is by far the commonest form of pneumonia seen in the emergency department (ED).

Many countries have developed national guidelines for the treatment of CAP. The British Thoracic Society (BTS) guidelines, updated in 2009, and the National Institute for Health and Care Excellence (NICE) guidelines updated in 2014, form the basis for the recommendations made in this session [1,2,3,4]. These guidelines are not applicable to the following patients:

Every year between 0.5% and 1% of adults in the UK will have community-acquired pneumonia. It is diagnosed in 5-12% of adults who present to GPs with symptoms of lower respiratory tract infection, and 22-42% of these are admitted to hospital, where the mortality rate is between 5% and 14%. Between 1.2% and 10% of adults admitted to hospital with community-acquired pneumonia are managed in an intensive care unit, and for these patients the risk of dying is more than 30%. More than half of pneumonia-related deaths occur in people older than 84 years.

Pneumonia remains one of the commonest causes of in-hospital death and carries a significant burden of cost to the UK health system, mainly due to the cost of inpatient care. In 1993, this cost was estimated at 441 million [5]. Hospital admissions for pneumonia rose by 34% between 1997 and 2005 and today the annual cost may exceed 1billion.

Although a confident diagnosis of pneumonia cannot be made on the basis of history alone it is unlikely that the patient with none of the following symptoms will have pneumonia.

The history should also identify factors which may influence the management plan if a diagnosis of pneumonia is made.

These would include the following:

Only 20% of UK cases of Chlamydia psittaci pneumonia have a history of bird contact, less than 10% of cases of Coxiella burnetii have a history of occupational exposure to animal sources (usually sheep) and less than a quarter of legionella cases occur in clusters. The low frequency of CAP caused by atypical pathogens coupled with the likely high prevalence of the relevant risk factors in the general population means that routine enquiry about such factors is likely to be misleading . Only in those with severe illness, where the frequency of legionella and staphylococcal infection is higher, does the BTS consider questioning about foreign travel and influenza symptoms to be of predictive value.

Whilst the BTS community acquired pneumonia guidelines acknowledge that certain features occur more frequently with particular organisms (see below), they consider none to be specific enough to influence the initial choice of antibiotic.

Whilst certain features occur more frequently with particular organisms none are specific enough to influence the initial choice of antibiotic.

A thorough examination of the cardio-respiratory system should be made to identify features consistent with pneumonia eg bronchial breathing, dullness to percussion, crepitations on auscultation of the chest, pyrexia, tachypnoea and tachycardia. Alternatively, the findings on chest examination may point to an alternative diagnosis such as pulmonary oedema, pleural effusion or pneumothorax.

As a minimum the following parameters should be recorded:

Dependent on the predominant presenting symptom the examination should also focus on areas (e.g. throat, legs) that may reveal features consistent with an alternative diagnosis (e.g. URTI, DVT/PE).

CT has no role in the routine investigation of patients with CAP.

The chest radiograph is the single most useful test available in the ED for diagnosing pneumonia. It is also in the identification of alternative diagnoses such as pulmonary oedema and exclusion of others e.g. pneumothorax. The BTS guidelines1 recommend that chest radiographs are performed on all patients being admitted from the ED with CAP in order to confirm or refute the diagnosis.

Chest radiographs are not necessary on patients discharged from the ED with a diagnosis of CAP unless the diagnosis is in doubt or the patient is considered at risk of underlying pathology such as lung cancer.

The lung parenchymal inflammation and fluid filled alveoli are seen as areas of consolidation on the chest radiograph. The areas of infection are usually limited by pleural surfaces to a specific lobe of one lung but occasionally it may involve more than one lobe or both lungs. Small pleural effusions are common and usually reactive. Occasionally, chest radiographs may appear normal in the early stages of pneumonia. AP films performed on very unwell in the resuscitation room are often of poor quality and distinguishing between pulmonary oedema and pneumonia can be difficult. The following signs may help to confirm a diagnosis of pneumonia:

The silhouette sign refers to the loss of the normal border between structures e.g.

As the bronchi branch a point is reached where the cartilaginous bronchial walls are too thin to visualise (unless calcified) and it is not possible to distinguish air in the bronchi from air in the surrounding alveoli. However, if the surrounding alveoli fill with fluid or pus then branching radiolucent air passages (air bronchograms) may be seen.

Left lower lobe pneumonia may be missed if the area behind the cardiac shadow is not routinely inspected.

The BTS guidelines recommend that the following tests be performed on all patients admitted with CAP:

A white cell count >15 x 109/l is suggestive of a bacterial pneumonia.

Urea forms part of the CURB-65 scoring system. Occasionally, patients will be identified with unsuspected renal failure or hyponatraemia.

CRP levels on admission have not proven to be clinically useful either diagnostically or prognostically but forms a baseline for later comparison. Failure of the CRP level to fall 72 hours after admission suggests treatment failure.

The value of routine measurement of LFTs in patients that are not jaundiced, with non-severe pneumonia is unclear.

The BTS guidelines recommend that ABGs only be performed in patients with oxygen saturations below 94%3. However, the measuring of lactate levels (which is now routinely measured on most blood gas analysers) is essential for identifying tissue hypo-perfusion in patients who are not yet hypotensive but who are at risk for septic shock. A raised lactate (particularly levels >4mmol/l) is a poor prognostic indicator independent of the CURD-65 score. Early goal directed therapy using sepsis bundle pathways on intensive care have been shown to increase the chance of survival for patients with severe sepsis [11,12].

Blood cultures are not necessary in the following groups:

Overall, blood cultures have a low sensitivity in CAP (<10% cases). The yield is particularly low for patients with non-severe CAP and no co-morbid disease, and for those who have received antibiotic therapy prior to admission [7,8].

The BTS guidelines recommend that blood cultures are taken from all patients with moderate or severe CAP and most other patients admitted with CAP, preferably before antibiotic therapy is commenced.

However, blood cultures may be omitted if the following criteria are met-

Blood cultures are not required for patients with confirmed low severity pneumonia in the absence of co-morbid conditions.

Purulent sputum samples should be sent for culture and sensitivity from patients with the following characteristics[1]:-

Since the aim is to deliver antibiotics within 4 hours of arrival at the ED, purulent sputum samples that are produced by patients being admitted with CAP should in general be sent for culture and sensitivity. Samples obtained later on the ward will have a lower yield due to antibiotic administration in the ED.

A number of serological tests are available for identification of specific organisms but are of little relevance to management of the patient in the ED.

The BTS guidelines recommend the following:

All patients with moderate or severe CAP should be tested.

PCR testing is available for mycoplasma pneumonia, Chlamydophila and respiratory viruses but should be selectively requested by respiratory physicians.

Pneumonia is not associated with specific ECG changes though sinus tachycardias are common. In the elderly it is not uncommon for pneumonia to trigger atrial fibrillation or rate related ischaemia.

The CURB-65 score is made up from the following components (1 point for each):

Patients with new confusion (disorientation in time, place or person) secondary to pneumonia are stratified by the CURB-65 system into a higher mortality risk group than those that are not confused. It is not uncommon to meet confused patients in the ED that have been brought by ambulance from care homes and be unsure whether their confusion is old or new. In this situation a score of 8 or less on the AMT is substituted for confusion in the CURB-65 score.

Confusion (new onset disorientation in time, place or person) OR an AMT score of ( 8/10) scores 1 point on the CURB-65 score

The possible score ranges from 0-5 and the mortality from pneumonia rises exponentially with the CURB-65 score as seen in the table below [10]. 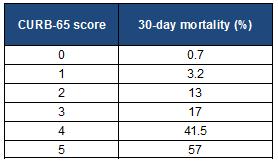 The BTS adopted this scoring system in 2004 as it is easy to use (being a single step system compared to previous multi-step systems) and it is clinically useful in determining the disposition of patients. The BTS classifies patients scoring 3 or more are as having severe pneumonia and recommends that these patients are admitted urgently. Hospital treatment should be considered for those scoring 2 but outpatient management is acceptable in selected cases. Most patients with CAP who have CURB-65 scores of 0 or 1 can be managed in the community.

A CURB-65 score of 3 or more indicates a severe pneumonia.

Other factors suggesting a need for admission

The vast majority of patients with a CURB-65 score of 0 or 1 can be discharged. However, the BTS considers additional factors that are adversely related to prognosis to be important in deciding whether patients require in-patient treatment or not, irrespective of their CURB-65 score. These include:

Some elderly patients with no adverse factors (other than age) will require admission solely for social reasons.

The CURB-65 score should not be used in isolation to risk stratify patients.

Patients should be given the following advice(1):

Patients discharged from the ED should be advised to see their GP for review within 48 hours or sooner if clinically indicated.

Local guidelines should be adhered to but listed below are pragmatic antibiotic regimes that the BTS support.

Patients with low severity pneumonia that are either discharged or admitted (for social reasons or because of significant co-morbidities) and most with moderate severity pneumonia should be prescribed oral antibiotics if they are able to swallow:

Admitted patients with low and moderate severity pneumonia that are unable to swallow should be given intravenous antibiotics.

Admitted patients with severe pneumonia should be given intravenous antibiotics as soon as possible after the diagnosis made.

The BTS guidelines recommend Co-amoxiclav 1.2 g IV TDS plus Clarithromycin 500 mg IV BD for 7-10 days as an appropriate first-line treatment. However, local resistance patterns and other factors may mean that some hospitals recommend alternative first-line therapy. In this situation local guidelines should be followed.

Antibiotics should be started in the ED as soon as possible after the diagnosis is made (usually on chest radiography) and within 4 hours of arrival in all cases. Local antibiotic guidelines should be followed.

The BTS oxygen guidelines [6] should be followed. Oxygen should be prescribed and administered if the oxygen saturations are below 94% on air or the arterial oxygen tension PaO2 is less than 8kPa.

Steroids are not recommended in the routine treatment of pneumonia of any severity.

Classical chest clearance techniques are not routinely recommended for patients admitted with pneumonia but may have a place in patients with pre-existing lung conditions.

CPAP and NIV have not been demonstrated to improve mortality in patients with respiratory failure secondary to pneumonia and their routine use is not recommended.

Para-pneumonic effusions are found in up to a half of all patients admitted with CAP. Thoracocentesis is recommended in all cases to identify those that are infected (empyemas).

Where there is evidence that the pleural aspirate is infected (clear but pH<7.2 or cloudy /pus) a pleural drain should be inserted.

A letter should be sent to the GP recommending that a chest radiograph be repeated 6 weeks after completion of treatment for the following patient groups:

PREVIOUSDisorders of Potassium Balance
BACK TO POST
NEXTAdult Cystic Fibrosis