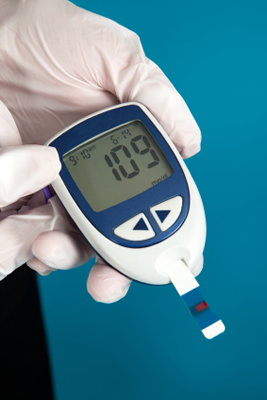 DKA is a common presentation to the emergency department.

The presentation can mimic many other disease processes. The ED physician must be able to diagnose, appropriately investigate, initiate treatment and manage complications.

There is a new nationally agreed guideline on the management of DKA, published by the Joint British Diabetes Societies Inpatient Care Group [1].

DKA is defined by this guideline as [1]: 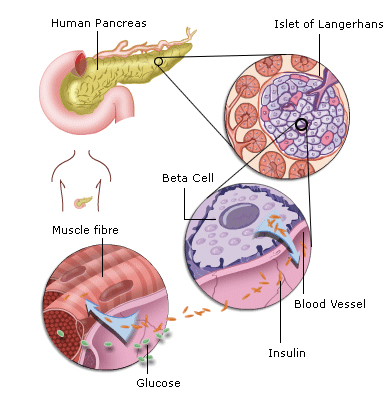 The pancreatic islets of Langerhans secrete insulin from the B cells. Insulin is secreted initially as a pro-hormone from which C-peptide is cleaved leaving the active insulin hormone.

Insulin has many actions as shown in the table below. The most well known is the stimulation of glucose and amino-acid uptake from the blood to various tissues. This is coupled with the stimulation of anabolic processes including glycogen, protein and lipid synthesis.

A deficiency in insulin causes an increase in glucagon, catecholamines, cortisol and growth hormone. These hormones stimulate hepatic glucose production via glycogenolysis and gluconeogenesis.

In addition, there is a decreased intake of glucose by the cells. This leads to hyperglycaemia, resulting in glycosuria which causes an osmotic diuresis and dehydration. 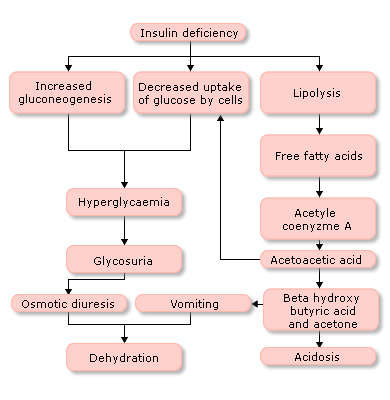 Insulin deficiency results in lipolysis increasing free fatty acid production. The fatty acids are then degraded through eight stages within the mitochondria. Each stage releases one molecule of acetyl-co-enzyme A. In the absence of insulin more of this is formed than can enter the citric acid cycle and the acetyl-co-enzyme is reduced to beta hydroxy-butyric acid or decarboxylated to acetoacetic acid and subsequently to acetone. The acetoacetic acid also reduces the glucose uptake by cells. Beta hydroxy-butyric acid, acetoacetic acid and acetone are acids causing in part the acidosis.

The increase in cortisol, catecholamines and growth hormone activates hormone-sensitive lipase which leads to lipolysis causing the release of free-fatty acids which are taken up by the liver.

When the concentration of glucose exceeds the maximum re-absorption capacity of the kidney, glucose remains in the filtrate. This causes an increase in osmotic pressure causing water and potassium to move out and into the urine. 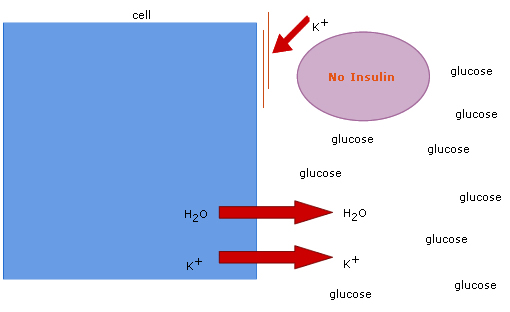 Below are some of the main osmotic diuresis changes with severe fluid and electrolyte loss:

Potassium depletion is due to excessive urinary potassium loss secondary to the osmotic diuresis. The diuresis leads to an increased delivery of fluid and potassium to potassium secretory sites in the distal nephron. The plasma potassium levels are usually within the normal range or high despite the loss, as hyperglycaemia and acidosis causes the potassium ions to shift from the intra-cellular to the extra-cellular compartment [2,3,7,8].

In the UK and other developed nations, whilst the mortality from DKA remains <1% it is the leading cause of death amongst people under 58 years old with T1DM.[13] Unsurprisingly perhaps, mortality increases with age and with the presence of pre-existing comorbidities The mortality rate is still high at over 40% in some low- and middle-income countries. This high mortality rate illustrates the necessity of early diagnosis and the implementation of effective prevention programmes. Cerebral oedema remains the most common cause of mortality, particularly in young children and adolescents. The main causes of mortality in the adult population include severe hypokalaemia, adult respiratory distress syndrome, and co-morbid states which may have precipitated the DKA such as pneumonia, acute myocardial infarction and sepsis. 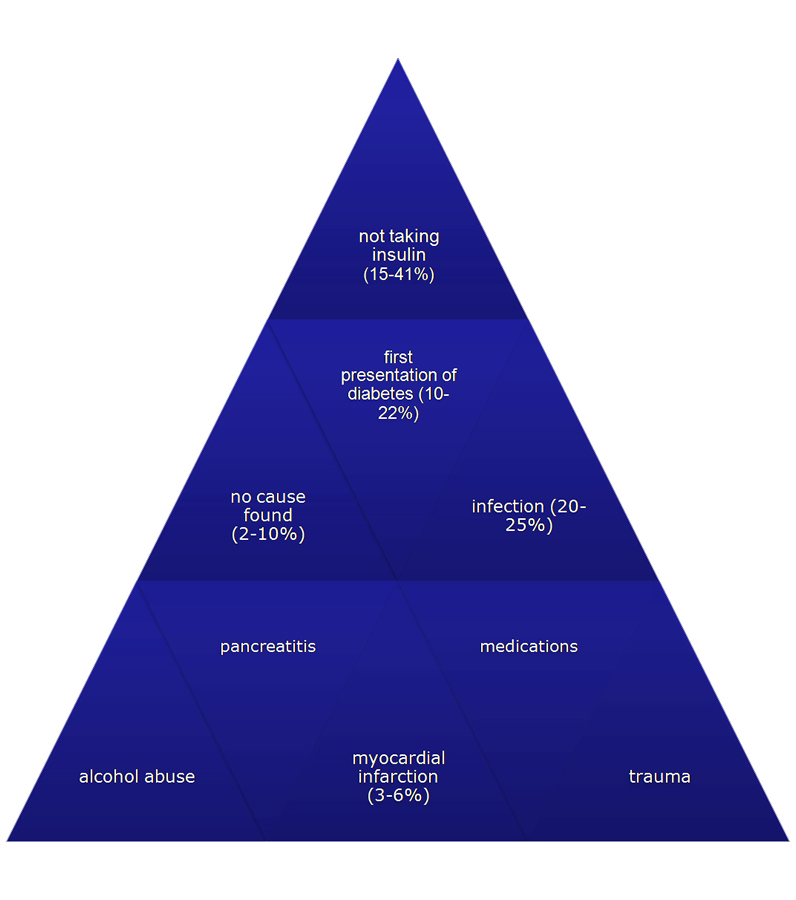 In a patient who presents with abdominal pain and vomiting the diagnosis of DKA can easily be missed.

There is no need to take arterial blood routinely in suspected DKA. Venous blood can be used, as the mean difference between arterial and venous pH is 0.03. Arterial sampling should only be undertaken if there is a concern that there is respiratory failure [19-21]. 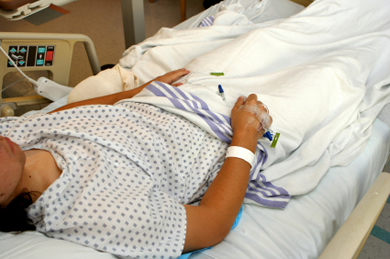 As with any critically unwell patient management starts with ensuring that there is a patent airway, and ensure adequate oxygenation and ventilation. If the GCS is reduced or ventilation is impaired, this may well necessitate intubation via a rapid sequence induction. In the initial phase of resuscitation high flow oxygen through a non-rebreathing mask should be administered. Patients should be on continuous 3-lead cardiac monitoring. If there is hypotension this needs to be treated in the first instance with IV fluid resuscitation. Inotropes may be needed in septic or cardiac shock following adequate fluid resuscitation.

An adequate history must be taken and examination performed searching for the underlying cause that precipitated DKA. 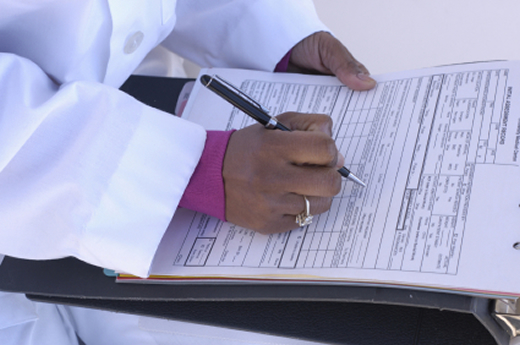 Management revolves around IV fluid rehydration, insulin administration, correction of electrolyte abnormalities and treatment of the underlying cause.

There is universal agreement that the most important initial therapeutic intervention in DKA is appropriate fluid replacement followed by insulin administration.

The main aims for fluid replacement are:

The typical fluid and electrolyte deficits are shown in the table below. For example, an adult weighing 70 kg presenting with DKA may be up to 7 litres in deficit. This should be replaced as crystalloid. In people with kidney failure or heart failure, as well as the elderly and adolescents, the rate and volume of fluid replacement may need to be modified. The aim of the first few litres of fluid is to correct any hypotension, replenish the intravascular deficit, and counteract the effects of the osmotic diuresis with correction of the electrolyte disturbance.

Low dose insulin therapy is effective regardless of the route of administration. Intravenous administration is the preferred route because of the delayed onset of action with subcutaneous insulin.

Intravenous insulin causes a more rapid fall in glucose and ketones than subcutaneous insulin. However, there is no difference in the length of stay, total amount of insulin or hypoglycaemic events in either route of administration.

Current practice is to commence a fixed rate intravenous insulin infusion at 0.1 UNITS/kg. In addition to this if the patients normally uses exogenous basal insulin (i.e. Lantus) this should also be administered as normal.

Despite a total body potassium deficit, commonly there is initially hyperkalaemia that will resolve with insulin and volume expansion and the subsequent correction of the acidosis. 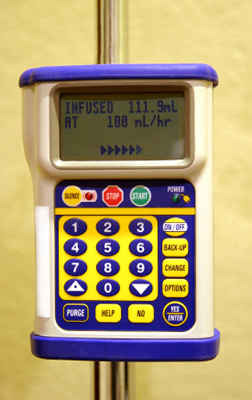 Once the glucose drops to less than 14 mmol/L then in addition to adding a 10% dextrose infusion consider reducing the rate of intravenous insulin infusion to 0.05 units/kg/hr to avoid the risk of developing hypoglycaemia and hypokalaemia.

The recommended targets are

If these targets are not achieved, then the fixed rate insulin should be increased by 1 unit/hr increments hourly until targets achieved.

In addition to this if the patients normally use exogenous basal insulin (i.e. Lantus) this should also be administered as normal.

This is the development of DKA in people known to have diabetes but where the glucose is normal, or not particularly raised. Improved education for those with diabetes with increased home capillary glucose and ketone monitoring has led to partial treatment of DKA prior to admission with consequent lower blood glucose levels at presentation. This condition is treated in exactly the same way as hyperglycaemic DKA. 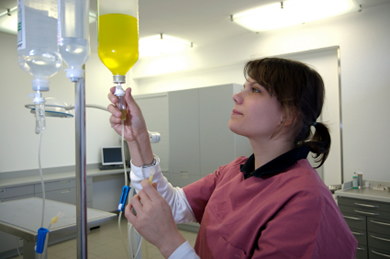 In DKA there are a number of specific biochemical and haematological considerations that need to be monitored and managed.

Phosphate levels are affected in DKA in a similar way as potassium. However phosphate supplementation does not change the correction of glucose, bicarbonate or pH. Phosphate should not be routinely given [3,4,7].

There is also a magnesium deficiency in DKA. The symptoms are difficult to recognise and overlap with calcium, potassium and sodium deficiencies.

They are paresthesia, tremor, carpopedal spasm, agitation, seizures and cardiac arrhythmias. Correction of magnesium should be considered in symptomatic patients or those with hypokalaemia.

In magnesium deficiency treatment of hypokalaemia with potassium is often refractory to treatment. The mechanism still remains unexplained.

Adequate fluid and insulin therapy will resolve the acidosis in DKA and the use of bicarbonate is not indicated (R). The acidosis may be an adaptive response as it improves oxygen delivery to the tissues by causing a right shift of the oxygen dissociation curve. Excessive bicarbonate may cause a rise in the CO2 partial pressure in the cerebrospinal fluid (CSF) and may lead to a paradoxical increase in CSF acidosis [42]. In addition, the use of bicarbonate in DKA may delay the fall in blood lactate: pyruvate ratio and ketones when compared to intravenous 0.9% sodium chloride infusion [43]. Intensive care teams may occasionally use intravenous bicarbonate if the pH remains low and inotropes are required.

The risk of DVT and PE is high in DKA. Patients should receive low weight molecular heparin as per the hospital protocol. 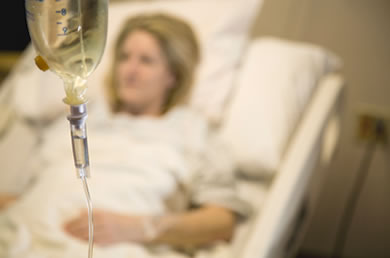 Blood sugar monitoring should be undertaken hourly, as should ketone measurement. A common complication of treatment of DKA is hypoglycaemia. In the patient with poor tissue perfusion there can be a significant difference between capillary and venous glucose, which is why bedside ketone monitoring is now advised. In patients with adequate tissue perfusion, the difference between venous and capillary glucose is less than 1 mmol/L and is adequate for monitoring.

Serum potassium level should be measured on arrival, at 60 minutes, 2 hours, and 2 hourly after that. The most rapid changes occur early in treatment. Bicarbonate should be measured every two hours for the first 6 hours [1]. Urine output should be recorded. Those with a poor urine output, cardiovascular disease or multiple co-morbidities may benefit from catheterisation and further invasive monitoring. These patients and those with a decreased GCS should be referred to HDU/ITU, otherwise refer to the on-call medical team. 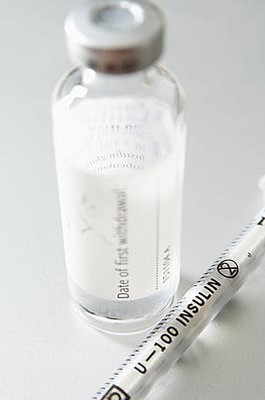 There are potential complications of the treatment of the patient with DKA:

This is caused by the administration of insulin, hourly monitoring of blood sugar concentration is needed to avoid this complication [2,3,7,15].

Hypokalaemia is a common complication, exacerbated by starting insulin in the face of hypokalaemia, inadequate potassium replacement or by the use of sodium bicarbonate. Hypokalaemia can lead to muscle cramping or weakness, nausea or vomiting, polyuria, polydipsia, psychosis, delirium, hallucinations and importantly cardiac arrhythmias and cardiac arrest.

Fortunately cerebral oedema is very rare in adults. Multiple factors in the treatment may contribute to cerebral oedema, these include osmotically active particles in the intra-cellular space driven by the insulin and rapid changes in sodium concentrations. This risk can be minimised by slow correction of hyperglycaemia and avoiding overzealous fluid replacement [2,7].

The partial pressure of oxygen steadily decreases during treatment to low levels. This is believed to be due to interstitial oedema and reduced lung compliance. The mechanism is similar to that causing cerebral oedema [7].

This is common, due to the loss of substrates in the urine that are necessary for bicarbonate regeneration, the large concentration of chloride infused in intravenous fluids and the shift of fluids if sodium bicarbonate is used. The acidosis normally corrects in the subsequent 24 to 48 hours through increased renal excretion. However the persistent base deficit can catch out the unwary. 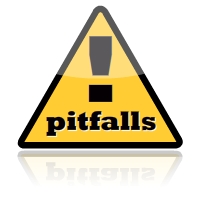 If the blood sugar and ketones are not measured then the diagnosis of DKA will not be made; it is especially important in patients with the following symptoms:

If the potassium is below 3.5 mmol/L this needs to be corrected prior to starting insulin.

The acidosis of DKA is treated with fluid and insulin therapy.  The use of bicarbonate is not indicated and may cause harm.

The underlying precipitating cause for DKA needs to be sought and treated.

This session will explore the management of diabetic ketoacidosis in young people with relevance to the published evidence and national guidelines.