Acute dystonia is a common presentation to the ED. Most cases, but not all, are associated with prescribed medication or drugs of abuse. Careful history taking and a high index of suspicion of dystonia is needed when a patient presents with a movement disorder. Medication commonly given in the ED, especially anti-emetics, can induce a dystonic reaction. Doctors prescribing such drugs require knowledge of this phenomenon and its management.

Acute dystonia is a movement disorder in which there is a state of abnormal tone produced by slow and sustained contractions of opposing muscle groups. These contractions are painful. They often provoke anxiety. Although dystonias may occur in any muscle group, they most commonly affect muscles in the head and neck. Usually only one muscle group is affected, though in approximately 20% of cases the phenomenon may affect more than one muscle group.

These include family history of acute dystonic reactions or previous history of dystonia (estimated relative risk = 6), alcohol abuse and cocaine use (estimated relative risk = 3-4). Emotional stress, fatigue, viral infections, hypocalcaemia, hypoparathyroidism and dehydration also increase risk. There is no clear evidence to determine whether the nature of any underlying psychiatric illness e.g. bipolar disorder, depression or schizophrenia affects the incidence of dystonic reactions to medication used to treat the illness.

Although acute dystonia can occur at any age, it is 2-3 times more common in patients under 35 and there is a linear decrease with age. In patients under 50 years of age, the incidence in men is twice that in women. The incidence of medication induced dystonias in the over 50s is the same for men and women. The reported incidence of drug induced dystonia ranges from 2.3% to 64% depending on risk factors listed previously. Two to three percent of patients commenced on neuroleptics will develop acute dystonia within days of initiating therapy. If highly potent neuroleptics (e.g. haloperidol) are used, this can increase to over 50%. Half of acute dystonic reactions related to medication occur in the first 48 hours and 90% within four days of starting the medication.

The commonest cause of acute dystonia is prescribed medication. Usually such cases present shortly after initiation of drug treatment, with 50% occurring within 48 hours, and 90% within five days of initiation of therapy. Acute dystonia can be dose related but is often idiosyncratic.

Acute dystonic reactions have been associated with the majority of anti-psychotics; with the older or typical neuroleptics, such as haloperidol, dystonias occur in 15-20% of patients. The risk is less with the newer or atypical medications such as clozapine, risperidone, olanzapine and quetiapine (<5%).

It appears that the stronger the anticholinergic potency of the drug, the lower the risk.

Neuroleptics are also used illicitly and are known as street Valium and can be associated with acute dystonic reactions.

Acute dystonia is more common with selective serotonin re-uptake inhibitors (SSRIs) than with other antidepressants e.g. tricyclic antidepressants. Moreover, antipsychotic serum levels can increase when SSRIs are added to therapy

There are two typical presentations of a drug induced dystonic reaction:

A young male recently started on, or with a rapid dose increase of, neuroleptics
A patient in whom prophylactic medication to prevent acute extrapyramidal symptoms has been missed, stopped or reduced

Acute dystonia is commonly induced by anti-psychotics, anti-emetics or antidepressants but has been attributed less commonly to many other classes of drugs.

The pathogenesis of acute dystonia is not fully understood. It is thought to be related to dopamine-receptor blockade, which disrupts the dopaminergic-cholinergic balance in the basal ganglia (substantia nigra) leading to a relative excess of cholinergic output. Antidopaminergic drugs with anticholinergic properties are therefore less likely to produce an acute dystonic reaction because they disrupt the neurotransmitter balance less markedly.

The clinical presentation of acute dystonia is variable. Examples of common mild forms include spasmodic torticollis, writers cramp and facial or mandibular spasm.

Patients usually only present to EDs with more severe forms of dystonia. Patients may appear agitated, with sweating and tachycardia.

Examples of such acute dystonias include:

This phase is followed by a more extreme and sustained spasm of extra-orbital muscles resulting most commonly in upward deviation of the eyes.

Additionally, the eyes may adduct. Abduction and downward gaze deviations are less common.

Features of buccolingual crisis may include:

Laryngospasm presents as stridor, and although rare, is potentially life threatening. 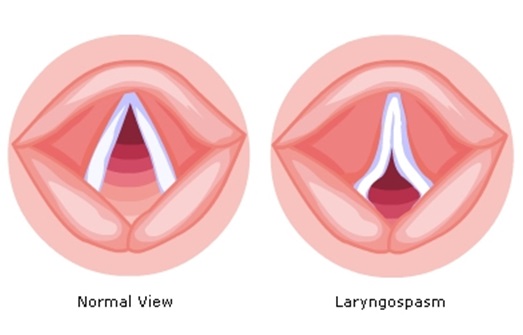 Acute dystonia involving the trunk may result in the characteristic posture of opisthotonus.

Dystonias can involve any muscle group but most commonly involve the muscles of the head, neck and trunk. Evidence Grade 2B

Presentation of the Consequences of Acute Dystonic Episodes

Finally, patients may present with the consequences of acute dystonic episodes such as:

Acute dystonia is essentially a clinical diagnosis based on a careful history and characteristic clinical presentation.

Both hypocalcaemia and hypomagnesaemia affect nerve conduction and muscle contraction producing tetanic spasms & should be checked in patients presenting with acute dystonia.

Anticholinergic agents are the treatment of choice because they block cholinergic receptors and are thought to balance the cholinergic and dopaminergic activity: intravenous (IV) or intramuscular (IM) procyclidine 5-10mg or benztropine 1-2mg (IV/IM) are the drugs of choice. If symptoms are due to an acute dystonic reaction, there should be an improvement within 5 minutes of IV administration and 20 minutes if given IM. Patients would be expected to be symptom-free by 30 minutes.

Ideally, if acute dystonic reaction is considered a differential, then treatment should be commenced parallel to investigations for concomitant diagnoses.

A second dose can be given if there has been no response after 10 minutes following IV administration (30 minutes for IM). However, if there continues to be no improvement, an alternative diagnosis and cause should be sought.

Paradoxically there are reports of acute dystonic reactions occurring after administration of procyclidine and other anticholinergics.

Benzodiazepines are GABA agonists; they inhibit and antagonise excitatory dopaminergic neurons. They can be helpful in refractory cases of dystonia (e.g. diazepam 2.5-10mg IV).

Prophylaxis is required for 48 to 72 hours to prevent recurrence of symptoms: oral procyclidine 5mg TDS is appropriate. In practice, patients are usually given prophylaxis for up to a week. Patients should receive advice about the potential for recurrence of dystonia if prophylaxis is not adhered to. GP/Mental health team follow up should be arranged for review of medication if appropriate.

Acute dystonia should be treated with IM/IV anticholinergics (e.g. procyclidine).

Some of the pitfalls when treating acute dystonias are: