According to a 2014 study1, rectal bleeding accounts for 0.3% of presentations to the emergency department.

The University Hospital of Wales performed a retrospective case note review2 of children presenting to the emergency department over 2 years and found lower gastrointestinal bleeding (LGIB) made up 0.14% of all presentations to paediatric ED, with a median age at presentation of 5 years and an even spread between sexes. Of those presenting with LGIB, 24% required admission and only 5% required urgent intervention. The authors concluded that a ‘high index of suspicion remains necessary to identify infrequent but serious pathology’.

Lower gastrointestinal bleeding is bleeding from the rectum which starts distal to the ligament of treitz, a fold of peritoneum which holds up the duodenojejunal flexure.3

Embryologically the beginnings of the GI tract are formed at the 4th week of gestation. Due to the rapid growth of the intestinal loop, it becomes too large to remain in the abdominal cavity, and therefore expands into the yolk sac (future umbilicus). The loop returns to the abdomen by the 8th week of gestation. As it re-enters the abdomen it rotates, and is fixed into position.4

If this part of foetal development goes wrong, it can result in malrotation, which will be discussed later.

Once development is complete, 3 distinct lengths of the GI tract can be separated according to their blood supply:

Another relevant embryological structure is the vitelline duct, which connects the yolk sac to the mid-end ileum within the foetus. If this structure persists into infancy it is named Meckel’s diverticulum. Due to its rich arterial supply from the vitelline artery (a branch of the superior mesenteric artery) it can cause bleeding in the GI tract.5

There are multiple causes of coagulopathy which typically present with other symptoms in the neonate (cephalhaematoma at birth, oozing from the umbilicus), but can also cause lower GI bleeding.

When reintroducing dairy into a child’s diet, the ‘milk ladder’ can be used, gradually increasing the amount of dairy a child is exposed to.

If there is a history of antibiotic use consider Clostridium difficile as a cause of colitis.

Firstly, assess the child for signs of haemodynamic instability, using an A-E approach, and resuscitate as required.

Use the history to gauge the severity of the problem, whether the child is at risk of haemodynamic instability, and to find any clues which could suggest the cause of the bleeding.

Use the examination to look for signs of anaemia, which would prompt further investigations, bowel obstruction, which is a medical emergency, or any other indicators of the cause of the bleeding.

In the majority of cases the history and examination should give you enough information to make a diagnosis.

A study8 printed in the October edition of the Archive of Diseases in Childhood (mentioned already under the ‘Context’ heading), found that over a 2-year period, of 80 children who presented to a tertiary UK hospital with LGIB, 76% of them were diagnosed with constipation or gastroenteritis, and only 5% of them required urgent investigation.

The table below shows investigations that could be considered following specialty review. (Click on the table to enlarge it) 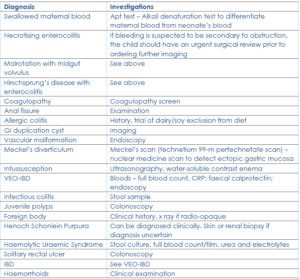 The management of children presenting with LGIB to the emergency department is of course hugely dependent on clinical assessment of the child and what the suspected cause of the bleeding is. Following A-E assessment, if the child is in hypovolaemic shock with a lower GI bleed then resuscitation will be required:

Following initial assessment and stabilisation then the history and examination can be taken. This will help determine whether the child requires admission, or whether they can be discharged and if an outpatient appointment is required.