Myasthenia gravis (MG) is a complex disease with many different signs and symptoms, which may be obvious or subtle.

It can cause a life-threatening true neurological emergency characterised by impending respiratory failure. The emergency physician (EP) should be able to promptly recognize, appropriately investigate and initiate treatment when faced with such a crisis

The name myasthenia gravis, which is Greek in origin, means ‘grave muscle weakness’.

MG is the most common neuromuscular junction (NMJ) disorder. It is an autoimmune disease caused by antibodies to the acetylcholine receptor on the postsynaptic membrane at the NMJ.

MG is characterised by weakness and fatigability of the voluntary muscles.

The annual incidence of MG ranges from approximately 7 to 23 new cases per million.

All ethnic groups and all ages may be affected.

It has a bimodal peak of incidence with the first peak in the third decade and the second peak in the sixth decade (‘young women and old men’).

It is probably under diagnosed in the elderly population. 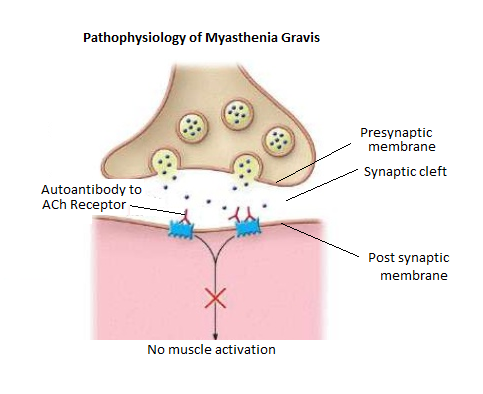 The NMJ consists of a motor nerve terminal and muscle membrane.

Its function is to amplify a relatively weak nerve impulse and thereby produce a strong electrical impulse in the muscle capable of initiating muscle contraction.

There are three components of the NMJ:

Abnormalities of the NMJ

Abnormalities of the NMJ in MG are postsynaptic in location (in contrast to the presynaptic abnormality in Lambert-Eaton syndrome).

Anti-acetylcholine receptor (anti-AChR) antibodies are found in 80-90% of patients with generalised MG and 50-60% of Ocular MG.

Although MG is predominantly caused by antibodies produced by B-cells, T-cells have also been shown to be important in the pathogenesis.

Thymic abnormalities are found in nearly 75% of patients with MG. Pathological changes are lymphoid follicular hyperplasia (70%) and thymoma (10%). The remaining 20% have other abnormalities.

There are four classes of MG based on aetiology [2].

Typically, patients present with a history of weakness and fatigue of voluntary (skeletal) muscles. Symptoms worsen on exertion and improve at rest. There is diurnal variation with worsening of symptoms in the later part of the day.

Most commonly affected muscles in order of frequency:

Ptosis and Other Features

A common presenting feature is ptosis, which is often partial and may be unilateral.

The extraocular muscles are affected initially in about 50% and, eventually, in 90% of cases.

Ptosis improves after a period of sleep (the sleep test) or with the application of ice on the lid (the ice test).

The pupils are typically spared in MG. The face may appear expressionless. The mouth may be open and the patient may have to support the jaw with their hand.

Ocular muscle weakness may be the only feature throughout the course in about 10% of patients.

Deep tendon reflexes are intact or may be brisk.

There is no objective sensory deficit and no deficit in cerebellar function.

Ptosis is the commonest physical sign in MG. It is seen in up to 90% of patients. The pupil is unaffected.

The severity and progress of the disease is assessed using the Osserman classification [5, 6]. 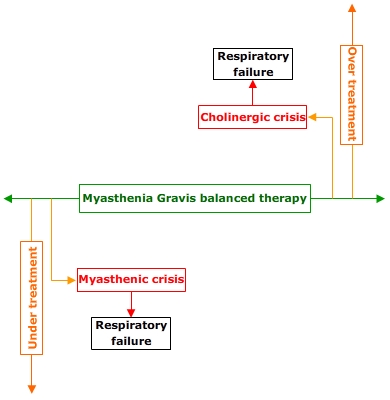 A myasthenic crisis (MC) is an acute exacerbation of MG leading to:

About one-fifth of patients with MG experience a crisis, usually within the first two years of diagnosis [7].

Such crises should not be fatal, as long as patients receive timely respiratory support and appropriate immunotherapy to reduce the myasthenic weakness of the upper airway and respiratory muscles [8].

Approximately 20% of patients will experience a myasthenic crisis, characterised by airway compromise or respiratory failure.

In MC, the patient may look anxious with rapid and shallow breathing due to fatigue of respiratory muscles. Paradoxical breathing and recruitment of accessory muscles with inspiration are important clinical signs.

Cardiac arrhythmias, occur in about a fifth of patients with an MC [11].

Common precipitating factors for MC include:

Medications that may trigger MC include:

Findings of bulbar myasthenia associated with upper airway compromise include:

A cholinergic crisis (CC) is an over-stimulation at an NMJ due to an excess of acetylcholine (ACh).

In MG, this occurs as a result of excessive inhibition of the acetylcholinesterase (AChE) enzyme, which normally breaks down acetylcholine. This is a consequence of too high a dose of AChE inhibitors.

In CC, respiratory failure may be present alongside other typical cholinergic symptoms e.g. miosis, diarrhoea, urinary incontinence, bradycardia, emesis, increased lacrimation, or hypersalivation. These features may also be present in organophosphate poisoning.

Excessive ACh stimulation of striated muscles at the NMJ produces flaccid muscle paralysis that can be clinically indistinguishable from weakness due to MC [12].

The main tests used in the diagnosis of MG are shown in the table.

The ‘edrophonium test’ is performed to identify MG infrequently; its application is limited to the situation when other investigations do not yield a conclusive diagnosis.

This test requires the intravenous administration of edrophonium chloride (Tensilon, Reversol) or neostigmine (Prostigmin) drugs that block the breakdown of acetylcholine by cholinesterase (cholinesterase inhibitors) and temporarily increases the levels of acetylcholine at the MNJ. In people with MG involving the eye muscles, edrophonium chloride will briefly relieve weakness [10].

In the past, the edrophonium test was routinely performed to confirm the diagnosis and distinguish undertreatment from overtreatment of MG, this practice has been largely abandoned as it is potentially dangerous in impending cholinergic crisis.

Radioimmunoassay test to detect the antibodies that bind to AchR is considered the diagnostic ‘gold standard’ [2]. AchR antibody titers correlate poorly with severity of disease.

Muscle fatigability can be tested for in many muscles [8]. Examples include:

The ‘edrophonium test’ is performed to identify MG infrequently; its application is limited where the patient has obvious ptosis. Diagnosis should be confirmed by electrophysiologic and/or immunologic tests.

Are there any conditions for which MG patients should be screened?

The following are diseases known to be associated with MG:

Despite advances in the treatment of MG, there is only a small evidence base. The following treatment modalities are available:

These drugs increase the availability of the acetylcholine to act on the AChRs.

They are usually the initial drugs used in treating MG; however, they do not modify the course of the disease and provide only symptomatic benefit.

Pyridostigmine is the most frequently used drug.

These are needed to treat MG of moderate or greater severity and in mild disease that fails to respond fully to acetylcholinesterase inhibitors.

Oral prednisolone, usually started at a low dose on an alternate-day regimen, and gradually increased, is the recommended first choice short-term immunosuppressant [1,15]

Because of the serious side effects associated with long-term steroid therapy, other immunosuppressant drugs are used as ‘steroid-sparing agents’.

Azathioprine, cyclophosphamide, cyclosporine, methotrexate and mycophenolate mofetil have been used in treating MG.

Azathioprine is the first choice in this class of drugs.

There is no data from randomised controlled trials (RCT) on the impact of any form of treatment on the risk of progression from ocular to generalised MG [20].

Plasmapheresis produces rapid, but temporary, improvement by reducing the amount of AChR antibodies. Indications are:

No adequate RCTs have been performed to determine whether plasma exchange improves short- or long-term outcome of MG. However, many case series studies report short-term benefit from plasma exchange in MG, especially in MC [21].

IVIG has the same indications as plasmapheresis. However, in contrast to plasmapheresis, it does not require expensive equipment or a large bore vascular access.

Both plasmapheresis and intravenous immunoglobulin administration have been demonstrated in many case series to provide short-term benefit.

There are two different indications for thymectomy in MG:

First, thymectomy for thymic tumours associated with around 10% of patients with MG [2,4].

Second, thymectomy for the treatment of MG in the absence of thymoma. It is generally agreed that patients with generalised MG between the ages of adolescence and 60 years should be offered thymectomy as 80%-85% of patients eventually experience improvement in their MG after thymectomy [2]. The precise role of the thymus in MG is still not determined nor is it clear why a minority of patients derive no benefit from the procedure [2,4].

Thymectomy is not effective in anti-MuSK-positive MG.

Handling an MC in the ED

Within the emergency department (ED), assessment of the patient in crisis includes:

We will consider each of these in turn on the next four pages.

Because the muscle weakness associated with NMJ dysfunction in MG fluctuates, no single parameter can be used to determine when an MG patient needs respiratory support.

Non-invasive ventilation (bilevel positive airway pressure or BiPAP) may prevent the need for intubation in myasthenic patients who have not developed marked hypercapnia [8]. Hypercapnia reflects a more severe degree of neuromuscular respiratory failure than hypoxia alone [19].

The decision to intubate can be straightforward in an MG patient with stridor or history of regurgitation and aspiration. However, other patients have subtle signs of deterioration.
Oxygen saturations can be misleading in patients receiving O2 therapy.

BiPAP should be considered in selected patients with MC who have respiratory compromise (without hypercapnia) and with the ability to synchronise with the machine [22]. A trial of BiPAP before the development of hypercapnia can prevent intubation and prolonged ventilation, reducing pulmonary complications and the lengths of ICU and hospital stay [22].

Endotracheal intubation may be necessary prior to differentiating between MC and CC [12].

Where there is doubt, the cause of respiratory failure can best be determined after the airway and ventilation have been secured.

The criteria for endotracheal intubation for mechanical ventilation in patients with MC is not well defined and decisions are based on physicians’ preferences and clinical judgement [19].

Direct laryngoscopy/nasoscopy may be useful to demonstrate vocal cord paralysis when bulbar myasthenic findings are not otherwise obvious [8].

Debate exists as to the best method of rapid sequence induction (RSI) in the MG patient. Several strategies can be used. As these patients are weak to start with, the simplest strategy is to use an induction agent and no muscle relaxant [18].

In untreated MG patients, decreased AChR cause succinylcholine (depolarising drug) resistance but increased sensitivity to nondepolarising agents. However, in treated patients these effects can be unpredictable [18]. Therefore, if muscle relaxants are to be used, either the physician must use a larger dose of succinylcholine (1.5-2 mg/kg), or a smaller dose (by factor of 50%) of a rapid onset nondepolarising relaxant, such as rocuronium.

Taking a careful history and performing a detailed examination may identify potential triggers for the MC.

Take a careful history and perform a detailed physical examination

Drugs that may worsen MG:

Antibiotics are indicated only if there is strong evidence of infection. Empiric antibiotic use is not recommended as some antibiotics can interfere with neuromuscular transmission. Clostridium difficile infection has been associated with prolonged MC [11].

The course of MG is difficult to predict [12].

A MG patient in crisis will need ICU admission for one or more of the following:

In a recent study in the US, the trend of IVIG utilisation has increased compared to plasma exchange and thymectomy [7].

All MG patients who present to ED with signs of MG exacerbation or a complication associated with MG treatment require admission and expert evaluation.

Continuous infusion of cholinesterase inhibitors is associated with life-threatening cardiac arrhythmias and is unsafe.

What are the factors that would lead to a poor prognosis in MG?

Older age and respiratory failure are predictors of poor prognosis in MG [7]. Median duration of hospitalisation for MG crisis is one month. Patients usually spend half of this time intubated in ICU [9].

What effect on mortality does the duration of intubation have?

The duration of intubation is an important short-term predictor of functional outcome after a crisis.

What is the mortality rate for patients in crisis?

Mortality rate during hospitalisation for crisis is approximately 4-8%. This has decreased from nearly 50% in the 1960s [11,13].

The emergency physician should be aware of the following issues:

Myasthenia gravis does not present often to the Emergency Department. However, it can manifest as respiratory failure

Paracetamol overdose accounts for in excess of 70% of cases in the UK whereas worldwide viral hepatitis is the commonest cause.