Mononeuropathy describes the involvement of a single nerve and is usually due to a local cause such as trauma or entrapment.

Mononeuritis multiplex refers to multiple non-contiguous nerve trunks being affected simultaneously and is usually due to multiple infarcts of the vasa nervorum due to a systemic vasculitic process.

Why should we as Emergency Physicians be interested in peripheral neuropathy?

Evidence, albeit scarce, has shown a prevalence of peripheral neuropathy to be 2.4% amongst the general population increasing to 8% with advancing age.

Peripheral neuropathy affects approximately two thirds of diabetics irrespective of whether they are insulin or non-insulin dependent.

The most common type of generalised polyneuropathy is diabetic sensorimotor polyneuropathy. Leprosy is the commonest cause of polyneuropathy worldwide. Neuropathies associated with HIV infection account for an increasing number of cases.

The causes of peripheral neuropathies can be classified into broad categories (Fig 1): 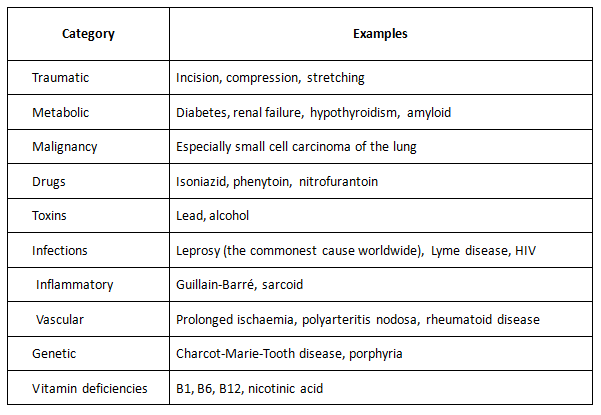 There are seven aetiologies that account for almost all cases of peripheral neuropathy in the UK. These are shown below.

The peripheral nerve consists of 2 main cells the anterior horn cell with its axon and the Schwann cell that envelops the axon. Blood supply is via the vasa nervorum.

There are 6 principal mechanisms of peripheral nerve damage:

The axon dies back from the periphery. Examples include Diabetes, metabolic conditions and toxic neuropathies such as drugs and alcohol.

Changes occurring after division of a nerve, for example after traumatic section of the nerve.

Microinfarction of vessels supplying the nerve, for example in diabetes and polyarteritis nodosa.

Attention should be paid to:

Different aetiologies may be associated with altered sensation, burning pain, weakness or autonomic features or a combination of these.

(i) Sensory failure leads to distal numbness, tingling, or burning of the extremities in the typical glove and stocking distribution, ascending proximally. Patients may struggle to perform tasks requiring sensory feedback such as doing up buttons.

The consequences of sensory loss:

Conditions with predominantly sensory failures include:

Conditions with predominantly motor failure include:

Cranial nerve neuropathies might include a mixture of sensory and motor signs e.g.:

Conditions which can exhibit autonomic neuropathy include:

Symptoms and signs associated with the underlying causes of peripheral neuropathy:

Mononeuropathies are typically caused by trauma, compressive forces or have a vascular aetiology. The history taken should reflect these possible aetiologies. In someone with acute common peroneal nerve palsy for example it would be important to ask about trauma to the lateral aspect of the knee. In patients presenting with carpal tunnel syndrome it would be prudent to ask about associated conditions such as pregnancy, obesity, hypothyroidism, acromegaly and rheumatoid arthritis. Vascular risk factors should be elicited, including whether the patient is diabetic or has a vasculitic condition etc.

Polyneuropathies have a heterogeneous set of causes. Their presentation varies depending on the underlying pathophysiology. The speed of progression of the polyneuropathy coupled with its nature (axonal or demyelinating) can help identify its aetiology.

In acute demyelinating polyneuropathies such as GuillainBarr syndrome, motor nerve fibres are predominantly affected with weakness rather than sensory loss being the earliest signs of disease. In acute axonal polyneuropathies such as those caused by toxins, pain is the predominant component, which tends to worsen to a peak over 2-3 weeks, recovering over several months.

In chronic axonal polyneuropathies (eg. due to diabetes or renal failure) the symptoms usually begin in the toes before the fingers then spread proximally, as injury tends to be related to axonal length. Sensory symptoms tend to precede motor symptoms. 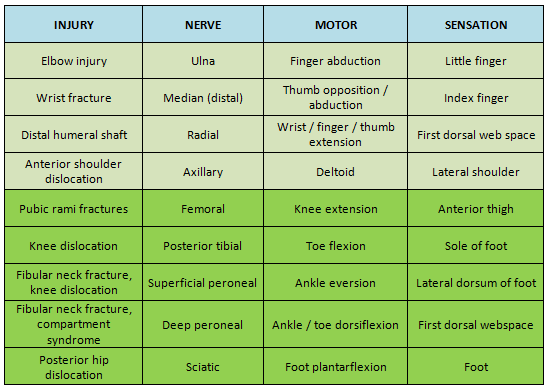 Sensory presentations can include unpleasant numbness, tingling and burning with aching in the lower limbs and feet, progressing over many months. There can be decreased sensation (especially vibration) in a glove and stocking distribution, absent ankle jerks or deformity (pes cavus, claw toes and rocker-bottom soles). Neuropathy is often patchy. The neuropathy often leads to painless punched-out plantar foot ulcers in an area of thick callous over pressure points, for example the metatarsal heads or the heel.

Do not make the assumption that if a diabetic patient can feel burning/aching pain in a limb, they do NOT have peripheral neuropathy in that limb.

Vitamin B12 deficiency should always be excluded in a patient in whom any of the following are present:

Initial symptoms are related to peripheral nerve damage numbness and tingling of extremities, signs of distal sensory loss with absent ankle jerks (owing to the neuropathy), combined with evidence of cord disease extensor plantars and exaggerated knee jerks (in which the posterior and lateral columns of the cord are damaged and the anterior columns remain unaffected), hence the term (sub-acute combined degeneration of the cord).

B12 deficiency occurs in any condition in which it is not ingested (vegan diet), Intrinsic factor is not produced (loss of functioning stomach), or its absorption is prevented (loss of/disease of the terminal ileum). In Pernicious Anaemia, the neurological changes are of particular importance because left untreated they can become irreversible.

Vitamin B1 (thiamine) deficiency is seen in alcoholics and patients with a poor diet. Polyneuropathy is a feature because Vitamin B1 is involved in nerve conduction. Conditions associated with B1 deficiency include Beriberi and Wernicke-Korsakoff syndrome.

Vitamin B6 (pyridoxine) deficiency causes mainly a sensory neuropathy and is seen during isoniazid therapy for tuberculosis, in patients who are slow acetylators of the drug.

Vitamin B3 (nicotinic acid) deficiency is seen in carcinoid syndrome and alcoholism. Its deficiency is associated with dementia, dermatitis and diarrhoea the three Ds and this combination of features is seen in the clinical syndrome of pellagra.

In GuillainBarr syndrome there follows a progressive acute symmetrical weakness starting in the legs and in some cases this ascends rapidly within days to involve the arms and trunk and then the intercostal muscles causing respiratory failure. Death can occur either as a result of rapidly progressing intercostal and phrenic nerve paralysis or autonomic dysfunction, leading to cardiac arrhythmias and haemodynamic instability.

Peripheral nervous system disease must be distinguished from central nervous system (CNS) disease (eg. stroke or spinal cord lesions). Signs and symptoms confined to a single limb usually suggest a peripheral aetiology. Associated pain in the extremity further increases the likelihood of peripheral pathology. Examination of deep tendon reflexes is the single most important test in determining whether a problem in central or peripheral. Brisk reflexes point to a central cause, whereas hyporeflexia or areflexia suggest a peripheral problem. CNS (upper motor neuron) lesions cause weakness which predominantly affects the extensor muscles of the arm and flexor muscles of the leg, and generalised increased tone. Atrophy of muscles and hypotonia isolated to a specific root or peripheral nerve, sites the pathology within the peripheral nervous system.

Occasionally CT or MRI may be needed for example to detect vascular irregularities, herniated discs or spinal stenosis.

Treatment of peripheral neuropathy should involve:

Treatment of underlying cause

No curative treatments currently exist for inherited forms of peripheral neuropathy. Peripheral nerves have the ability to regenerate, as long as the nerve cell itself has not been killed. Treating the underlying cause of peripheral neuropathy can prevent new damage, for example, reducing exposure to toxins such as alcohol and avoidance of offending drugs. Rigorous glycaemic control in diabetics can help preserve nerve function. The emergency treatment of vitamin B12 deficiency involves 1 mg injections of vitamin B12 intramuscularly on alternate days until no further improvement (e.g. for 2 weeks), followed by maintenance treatment of 1 mg IM every 2 months for life. Complete neurological recovery is possible. If the neuropathy is due to a vasculitic process, prompt treatment with steroids can prevent irreversible nerve damage. Thyroid hormone replacement typically ameliorates the symptoms of hypothyroid polyneuropathy. Treatment of Guillain-Barr syndrome includes plasma exchange and intravenous immunoglobulin.

Neuropathic pain is often difficult to control. Simple analgesics (e.g. tramadol) may help to alleviate symptoms. Neuromodulators such as tricyclic antidepressants may have a beneficial effect.The best evidence of efficacy exists for gabapentin, carbamazepine, or topical capsaicin cream. Gabapentin for example may be started at a dose of 100 mg to 300 mg tds, then gradually increased to a total daily dose of 1800 mg. Local anaesthetics, injected or in patch form may help relieve more intractable pain. Occasionally nerves may be surgically destroyed. Surgery may help in other ways for example a mononeuropathy caused by a herniated disc may benefit from a microdiscectomy, or the symptoms of carpal tunnel syndrome should improve after surgical decompression.

The prognosis of a peripheral neuropathy clearly depends on its aetiology. Acute neuropathies such as Guillain-Barr syndrome appear suddenly, progress rapidly and resolve slowly as the damaged neurons heal. Chronic neuropathies begin subtly, progress slowly and may follow either a relapsing and remitting course, may reach a plateau phase or may slowly worsen over time.

As with any condition, it is important to ensure appropriate follow-up after the emergency department visit.