Renal colic, which affects between 2-3% of the worlds population, commonly presents to the ED. It may present at any age, although there are certain groups more predisposed. You will often see renal colic patients writhing in agony since the pain is sometimes considered worse than that of childbirth.

Management in the ED focuses on:

The pain caused by the passage of stones through the ureter is often compared to the contractions of childbirth. The pain is due to ureteric muscle contracting in an attempt to shift the stone.

Renal stones are composed predominantly (6080%) of calcium oxalate and / or phosphate. 1015% are struvite and approximately 1% cystine and 1% uric acid.

Occasionally they are made of xanthine, indinavir and triamterene[1].

Low urine volume is the most common factor in patients who tend to form stones and is easily remedied by increasing fluid intake sufficient to produce a urine output of 3 litres per day[2].

Usually, a causative factor is not identified. Some authorities advise detailed evaluation after a single stone as recurrence rates are high. This does not appear to be cost effective and is probably best reserved for repeat stone formers.

While renal colic can affect anyone at any age, some groups are more predisposed than others. Predisposition is related to age and gender, as well as to biochemical factors and urinary structural abnormalities.

We have already identified groups most predisposed to stone formation. Predisposition can also be biochemical or anatomical (see below)[3].

(i) Biochemical predisposition to stone formation:

(iii) Other aetiologies may include:

Investigation for underlying cause is best directed at recurrent stone formers

Classically the patient suffering from renal colic has a sudden onset of unilateral loin to groin or renal pain, is writhing in agony or restless, and is nauseated. Pain is classically colicky in nature and radiates to the scrotum and tip of the penis or labia majora.

The pain of renal colic is caused by obstruction of flow in the ureter, leading to increased wall tension in the urinary tract. Prostaglandin synthesis is increased, with the resultant vasodilatation causing a diuresis which further increases pressure. Prostaglandins may also cause smooth muscle spasm in the ureter.

There may be intervals between episodes of pain, so it cannot be assumed that cessation of pain means that the stone has been passed and the episode ended.

Large stones in the renal pelvis will present with haematuria, infection or decreased renal function rather than acute renal colic. These may be staghorn shaped and usually consist of struvite or cystine.

Pyuria may be evident, but this is usually a result of ureteral irritation rather than a sign of infection.

Imaging must be used in all cases that attend the ED and while blood and urine samples should be taken, the findings are often non-specific.

The differential diagnosis of renal colic includes several red flag conditions listed below. For this reason imaging is essential.

Renal colic may also be diagnosed when, with the increased utilisation of imaging, stones are discovered incidentally in the investigation of abdominal pain not originally attributed to renal colic [4].

Patients with renal colic that has seemed to resolve should be imaged, to eliminate differential diagnoses

Dipstick urine testing should be carried out in patients with suspected renal colic. Microscopic haematuria will be present in 90% of cases but it will be absent in up to 10% of cases; therefore, if the clinical presentation is suggestive, these patients should progress to further investigation. Pyuria is often present but this is often as a result of ureteral irritation rather than infection.

In addition to the dip-stick test, urine should be sent for microscopy and culture if infection is suspected from the history or examination.

Recurrent stone formers should have a 24 hour urine collection for:

Specific therapy will be indicated if abnormalities are found in the course of this screening, e.g. allopurinol for uric acid stones, and measures required to increase calcium excretion in hypercalcaemia, such as thiazide diuretics.

A full blood count and electrolyte screen should be taken. Samples will also be required for serum amylase, phosphate, urate, bicarbonate and calcium.

Intravenous (IV) access should be obtained at the same time as blood samples are taken for fluid, analgesia or antiemetic administration

Abdominal radiography, including the kidney ureter and bladder (KUB) radiograph, is commonly the first step in the work up of abdominal pain (see figures). The KUB shows no evidence of renal tract calcification and following contrast (right) there is prompt excretion through the upper tracts. These are normal films. 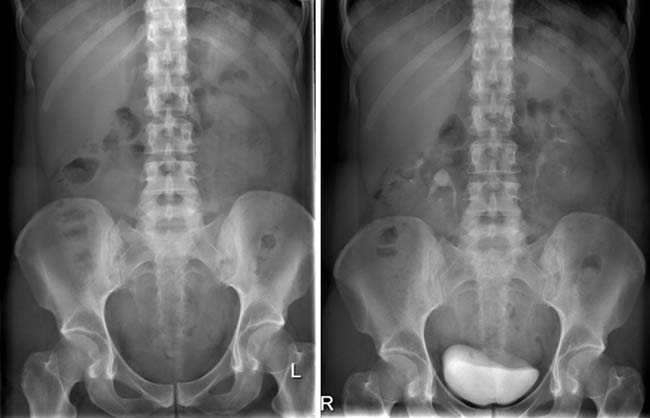 However, there are several factors to take into consideration when using this method of imaging:

With intravenous urography (IVU), stones are visualised as lucent filling defects in the contrast filled pelvicalyceal system (see figure below). Standard films used in an IVU series are a plain KUB, a 20 minute film and a post micturition film. Delayed films are necessary where obstruction is demonstrated. This is shown as a delay in appearance of the contrast in kidney and ureter, always compare these films with the standard KUB to localise stone position.

IVU used to be seen as better than computed tomography (CT)-KUB, in assessing the degree of obstruction and facilitating decisions regarding further management. However, decisions on the ongoing management of renal colic are more often based around stone size and location and it is now considered that CT is superior at assessing these.

The chief disadvantage of IVU is the high degree of expertise needed to interpret the subtleties. These are often missed by the junior emergency physician. Yet, frustratingly, IVU often remains the predominant emergency imaging technique for renal colic.

With high grade obstruction even prolonged imaging of 12-24 hours can fail to demonstrate obstruction, due to inadequate concentration of contrast medium

Unenhanced CT is now the imaging modality of choice in renal colic, especially in evaluating cases where the diagnosis may be unclear, for example acute flank pain in the elder patient. It is rapid, can measure the size of calculi and is able to assess the degree of associated urinary obstruction. The CT KUB below shows calculus in the right ureter. 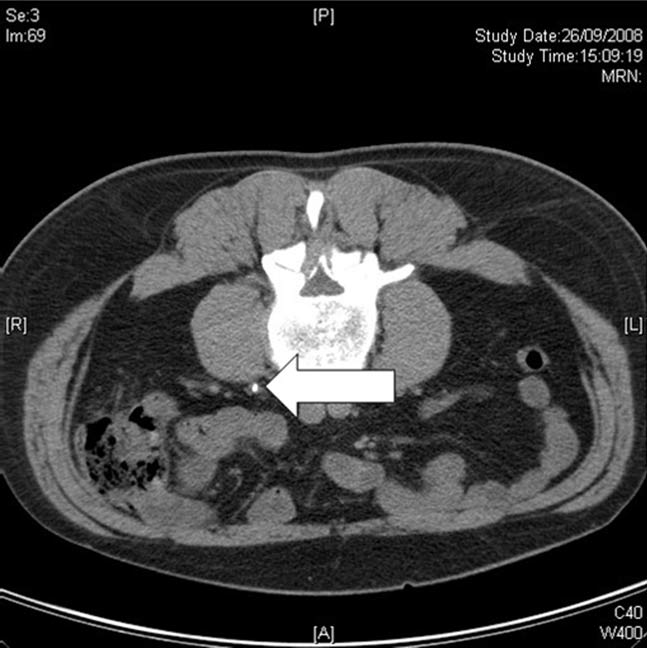 False negative rates of 2-7% are probably due to a small size of stone. Stone size is important given that it relates to spontaneous passage. Secondary signs such as hydronephrosis, perinephric oedema and stranding, and periureteral oedema are commonly seen. Perinephric stranding appears after 2 hours and is maximal at 8 hours.

Criticism of using CT in evaluating renal colic has centred on radiation exposure. Although this is true, diagnostic yield is greater and may merit the risk. Low dose CT protocols have been evaluated and appear to maintain diagnostic accuracy. In American studies the cost of CT appears to average out as equivalent to IVU.

Studies have shown that patients with flank pain, upon whom a CT is ordered, have calculi in approximately 70% of cases (47%, however, have a coexistent diagnosis). Over 99% of stones are seen on CT, the exceptions are pure matrix stones associated with drugs such as indinavir and related protease inhibitors. The majority of alternate diagnoses are detected by CT, especially pyelonephritis, renal mass, adnexal pathology, diverticulitis and appendicitis

Ultrasound has a lower sensitivity (24-77%) when compared to CT (96%). Specificity when both techniques are used approaches 100%. Ultrasound is often used as the first line imaging technique in pregnant women and children where radiation is best avoided. Calculi as small as 0.5 mm can be visualised but sensitivity increases with increasing stone size (see Figure). Visualisation of ureteral jets within the bladder lumen on ultrasound disappears with obstruction and may indicate the presence of ureteral obstruction. Twinkling artifact on Doppler may aid the diagnosis of smaller stones. 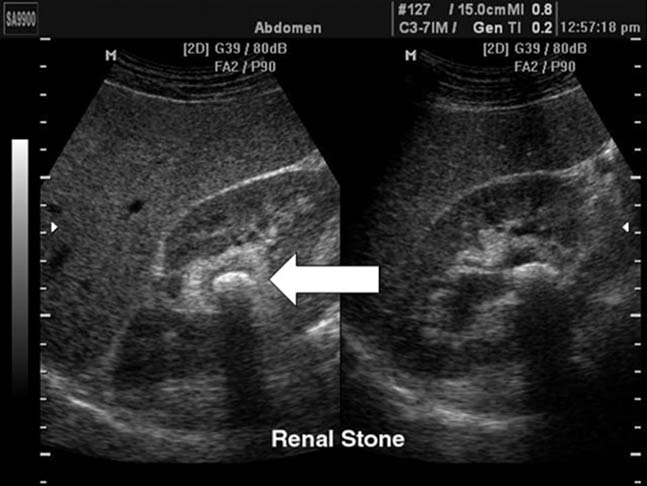 Renal colic is no more common in pregnancy. Pregnancy represents some special considerations. Whilst 80% of calculi pass spontaneously, favouring conservative management, the diagnosis can present problems as hydronephrosis of pregnancy can make diagnosis of associated obstructing calculus difficult. Endovaginal USS images can help with visualisation in distal ureteric and ureterovesical stones. Unenhanced CT may be indicated in later pregnancy as the exposures required to facilitate IVU exceed the radiation dose.

Most urologists advise sieving urine to facilitate chemical analysis of retrieved fragments, especially in the case of recurrent stone formers.

Since the majority of renal stones pass spontaneously, management in the ED should be directed to rapid diagnosis and pain relief with referral to urology indicated for developing complications.

Traditionally opioids and non-steroidal anti-inflammatory drugs (NSAIDS) have been used in renal colic and both appear to be effective. A Cochrane database review in 2005 analysed 29 trials with a total of over 1,600 participants and although heterogeneity limited pooling of results, and the predominant opiate was pethidine, several conclusions could be drawn[5]:

When is it safe to discharge a patient?

It is only safe to discharge a patient when pain is under control. Brief ceasing of pain may occur during stone passage, and you must have ruled out differential diagnosis so imaging is always recommended.

It is also only safe to discharge patients if there are no complications such as bilateral blockage, single kidney, anuria or signs of infection. These complications warrant hospital admission.

A patient must not be discharged if there are any factors or complications such as:

Aggressive therapy and monitoring is required for potentially septic patients who also have ureteric obstruction. The presence of pyrexia mandates urgent full blood count, blood and urine cultures, creatinine and lactate levels should also be obtained. Resuscitation using surviving sepsis guidelines in a High Dependency Unit environment is advised. Antibiotic options include gentamicin and ceftazidime intravenously. The presence of hydronephrosis is an indication for urgent nephrostomy and this is usually performed by a radiologist under fluoroscopic guidance.

Patients with stones causing significant ureteric obstruction and pain are treated by stenting pending definitive treatment. Correct insertion is evidenced by x-ray confirmation of the proximal coil in the renal pelvis and distal coil in the bladder. In the 20% of cases where placement fails, then nephrostomy is required. Stents have the potential to cause distressing symptoms and impair quality of life and many urologists are attempting to decrease usage[6].

Xanthogranulomatous pyelonephritis is an unusual suppurative granulomatous reaction to chronic infection, often in the presence of chronic obstruction from a calculus, stricture or tumor. Surgery is invariably required to completely eradicate the infection and the accompanying calculus and/or obstruction. Kidney-sparing surgery may be undertaken in patients with focal disease.

A patient can be discharged if pain-free and apyrexial. There must be no complications or other factors such as those listed above. It is essential that the correct follow up procedures have been set up and that the patient is made fully aware of the correct advice.

Sufficient analgesia must be provided so that the pain can continue to be controlled after discharge. Urology outpatient follow up is organised according to local protocols[2]. However, the following must be carried out:

Advise the patient of the following:

A longitudinal cohort study by Resim in 2005, based on the discovery of 1 receptors in the distal ureter, found 1-blockers decreased the number of ureteral colic episodes and also intensity of pain during spontaneous passage of lower ureteral calculi during follow up[8]. There were several weaknesses in trial design and no firm conclusions can be drawn. A recent meta-analysis has also demonstrated that use of calcium channel blockers can marginally increase stone expulsion as compared with standard therapy but the rate of adverse effects was significant[9].

Retrieval with endoscopy is utilised for large stones, multiple stones or stones causing significant obstruction. Flexible ureteroscopy has emerged as the main treatment for mid and distal ureteric stones. A Cochrane review of current RCTs has shown that during follow up of ureteroscopic retrieval of stones, hospital stay and complications are increased in comparison to ESWL but stone free rate is increased. However, heterogeneity prevented extrapolation to definitive clinical decision making. Innovative YAG laser technology may in future influence this decision[6].

Infection in the presence of obstructing calculus is a urological emergency. Decompression is required via urgent nephrostomy if hydronephrosis is evident