It is a common presentation which accounts for 3-5% of ED attendances [1]. The incidence is not constant throughout life, but rises sharply over the age of 70 years with further rises over the age of 80 in women. In elderly patients in long term care, the incidence can be as high as 6%.

The Framingham Study found that around 30% of patients with syncope had more than one episode. For a single episode of syncope, prognosis varies greatly and is related to the underlying cause.

Identification of the underlying cause following a single episode of syncope can be challenging. Costs of investigation are of the order of 2,000 per patient in the UK with a diagnosis being made in approximately 50% of cases. The role of the Emergency Physician is pivotal in risk stratifying serious from non-serious causes of syncope and ensuring appropriate intervention when required while at the same time avoiding unnecessary investigations.

Pathophysiology and causes of syncope

Syncope results from a temporary reduction in cerebral perfusion. Although in a significant proportion of cases (up to 50%) no underlying pathology is identified, there are a number of recognised causes of syncope: 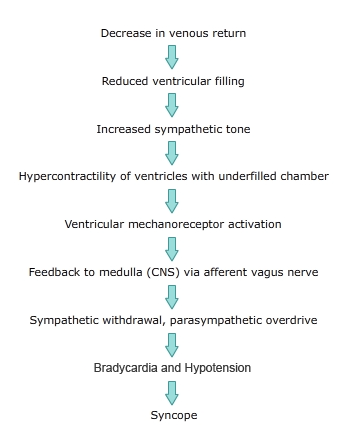 Orthostatic syncope (10% of cases) is defined as an orthostatic drop of >20 mm systolic blood pressure or >10 mm diastolic blood pressure. This may be due to absolute volume depletion from dehydration or haemorrhage or to venodilatation caused by medications or autonomic insufficiency (eg as occurs in Parkinsons disease).

Neurological/psychiatric syncope (5% of cases) include basilar artery migraine, vestibular dysfunction and vertebrobasilar ischaemia. Psychiatric syncope is a recognised syndrome consisting of syncopal episodes found in anxiety, depression and conversion disorder that resolve with treatment of the psychiatric disorder.

Syncope presents the emergency physician (EP) with a unique challenge: by definition, there will have been full recovery from the index event, approximately half of these patients will never have a cause identified and the majority of the remainder will have a benign underlying problem (eg. vasovagal syncope). The key for the EP is to risk stratify patients into low risk (the majority) and high risk by taking a careful history, performing a focussed clinical examination and, where necessary, ordering a limited number of basic investigations.

In particular, in addition to recognising orthostatic aetiologies (hypovolaemia or drug-related) it is critical to identify those patients who may have an underlying cardiac pathology for their syncope; the history and examination will be largely directed towards identifying cardiovascular abnormalities (cardiac failure, valvular problems, arrhythmias, etc.) that may require further investigation. A systematic approach to syncope can allow for the safe discharge of the majority of patients without the use of expensive and inappropriate investigations.

A careful history will give key information indicating the potential cause of syncope. The first key point in the history is to confirm that the presentation was actually syncope; it must be differentiated from conditions such as seizures, collapse without loss of consciousness (drop attacks), and vertigo.

Key features to be established in the history are shown below:

Other factors which are important to establish in the history:

The majority of patients with syncope will have a normal physical examination. However, it is important to exclude serious underlying pathology in the minority. Although syncope is often seen as a neurological presentation, cardiac causes of syncope are more common than neurological (and often carry a poorer prognosis), and so a thorough cardiovascular examination is required. It is crucial to identify evidence of cardiac failure or valve lesions.

Tachycardia and hypotension could indicate volume depletion and a cause should be sought. Orthostatic hypotension (a drop of systolic BP of at least 20 mm Hg on standing) is common particularly in the older patient. Its presence does not exclude the possibility of a more serious cause of syncope.

Specific issues to consider in cardiovascular examination are (see Table 1):

Tongue biting points to a seizure as a cause of loss of consciousness. However it is an insensitive sign and its absence does not exclude seizure.

Other important points to consider on clinical assessment:

As previously noted, clinical examination is often normal in syncope, so differentiation from other causes of collapse is usually based on the history.

May be preceded by aura. Post ictal state common. Unlikely if recovery is rapid.

Symptoms on exercise; rapid recovery usual. Absence of murmur at rest does not exclude cardiac outflow obstruction. Unlikely in the absence of mechanical valves, exertional murmur, or evidence of ventricular hypertrophy.

Usually gradual onset with prodromal symptoms. Unless given glucose recovery may be slow and incomplete.

Most common in young women. Patient may be aware of specific triggers. Otherwise uncommon.

Once a thorough history and focussed examination have been performed, this information needs to be put together with limited ED-based investigations to complete a robust risk stratification of your patient to determine the need for further investigation and/or urgent admission.

There are two main risk scoring systems in current use: the OESIL score and San Francisco Rule. Both have been well validated for use in the ED. These scores are designed to identify patients who are at low short term risk of serious adverse events following syncope and who can safely be investigated as outpatients.

A third risk stratification tool, the EGSYS score has been developed and validated in a smaller patient group to identify patients at high risk of cardiac syncope. There is considerable scope for further research to develop simple scoring systems that will have the high sensitivity of the current systems but improved specificity.

The American College of Emergency Physicians Guideline on syncope recommends (based on class B evidence) that patients with syncope and evidence of heart failure or structural heart disease or patients with syncope and other high risk factors (older age, haematocrit < 30%, abnormal ECG or history or presence of structural heart disease, coronary artery disease or cardiac failure) should be admitted. “Older age” is not defined.

The San Francisco Rule [3] identifies high-risk patients based on the presence of the following factors:

The presence of any factor is considered sufficient for the patient to be high risk.

If a patient score zero in the risk stratification tool, they are then said to be in the low risk group for serious outcome.

In the original validation study, the incidence of serious adverse events was 6.7% with the rule being 98% sensitive and 56% specific to predict adverse events.

NICE guidelines (5) also recommend that for patients presenting with transient loss of consciousness, refer anyone with the following for further assessment :

Specific investigations should be carried out directed by the history and examination and in order to complete appropriate risk stratification rather than following a blunderbuss approach which will produce a low yield of true positives. There are, however, some routine ED based investigations that are appropriate in all patients with syncope.

The following investigations should be ordered for all patients:

A bedside glucose test (BM) helps rule out hypoglycaemia, although it is unlikely that you would make a quick recovery from hypoglycaemia induced LOC unless intervention was given.

Measurement of haematocrit < 30% is required to complete the San Francisco Rule to identify which patients can be safely discharged.

ECG is essential for picking up cardiac causes of collapse and should be done on all patients presenting with Syncope.

For people with a suspected cardiac arrhythmia cause of syncope, ambulatory ECG monitoring can be requested as an out patient. The type of monitor would depend on the frequency of symptoms.

Management in the ED for patients who have presented with syncope is naturally limited by the fact that, by definition, they have made a full recovery from their index event. Intervention in the ED is essentially geared towards achieving robust risk stratification (as described previously) and confidently discharging patients at low risk with no follow-up (ie. normal examination, no risk factors), whilst identifying those who require either admission for urgent investigation or further outpatient investigation

Differentiation between a benign flow murmur, aortic stenosis and subvalvular obstruction (ie. HOCM) can be difficult. As a rule a shorter (rather than a quieter) ejection systolic murmur is more likely to be benign. The murmur of HOCM is unusual in that it becomes louder on standing up (due to decreased venous return reducing the size of the heart). Echocardiography is a cheap, safe and readily available investigation and any patient with a murmur in the context of collapse warrants echocardiography.

Learning Bite
Any patient with a murmur in the context of collapse warrants echocardiography.

Exercise associated syncope is defined as syncope occurring during or immediately after exercise and accounts for 3 to 20% of cases of syncope. Patients with exercise associated syncope include groups of patients at high risk of sudden death. Serious causes to be considered include arrythmogenic right ventricular dysplasia, Brugada syndrome and HOCM. Although there can be pointers to these at presentation, there may not be: in all of these conditions the ECG may be normal or may show non-specific changes; and the murmur of HOCM may not always be heard.

The elderly patient with syncope

Syncope is increasingly common with increasing age and the great majority of patients presenting to the ED with syncope will be aged over 65. Older patients have a wide range of problems likely to cause syncope: e.g. resting cerebral perfusion may not be much above the minimum level needed to maintain consciousness, there may be a poor baroreceptor response, there may be a degree of cardiac failure, and drugs that can cause syncope are commonly taken by the elderly. In addition, although neurocardiogenic syncope is more common in older patients, 10% of elderly patients without neurocardiogenic syncope have a positive tilt table test.

If a patient has had a typical, solitary vasovagal syncope while standing, with reliable prodrome, with a normal ECG and no clinical evidence of structural heart disease, they can keep driving and do not need to inform the DVLA. However, if it has occurred while sitting, they must not drive for 1 month and must inform the DVLA. If a patient has unexplained syncope, including syncope without reliable prodrome, they must not drive and inform the DVLA while they await further investigation.

For a further information see the full DVLA guidance