As an emergency medic you are unlikely to be in a position where you are asked to prescribe emergency contraception if you have a co-located urgent treatment centre or access to a sexual health clinic. However you may be asked to do this out of hours, or as part of your assessment for sexual assault, or if you do event medicine, so it’s important to have an understanding of the available options and know where to refer patients when needed.

So what are the available options for emergency contraception?
There are currently three licensed forms of emergency contraception two hormone-based tablets and one non-hormonal coil. The decision of which to use depends on factors such as local availability, coil fitting services and how many hours post unprotected sexual intercourse (UPSI) the patient presents to you.

Levenogestrel or the ‘Morning after pill’

The morning after pill is probably the most familiar to patients and clinicians alike. It has been around for a number of years and is very reliable as a form of emergency hormonal contraception. Levonorgestrel (progesterone) commonly marketed as Levonelle can be used up to 72hrs post-coitus. It is most effective if taken within twelve hours after unprotected sexual intercourse and its efficacy reduces with time such that if taken within 24hrs it will prevent 95% of pregnancies and if taken within 72hrs it will prevent 58% of pregnancies.
Should a patient have another episode of unprotected sexual intercourse then Levonelle can be taken again in the same cycle.
Common side effects include headache, nausea and irregular bleeding and if a patient vomits within two hours of taking a dose then they are advised to take another dose. Patients should be advised to take a pregnancy test if the next expected period is delayed.

Updated FSRH guidelines have advised that if a women weight more than 70kg or has a BMI> 26kg/m2 then double dosing of levonorgestrel should be considered.
Contraindications to Levonogestrel use include acute porphyria, pregnancy, severe arterial disease, undiagnosed vaginal bleeding and a history of breast cancer within the last five years.

Ulipristal has been licensed for use since 2010 and is the second of the two forms of emergency hormonal contraception. Marketed as EllaOne or Esmya , ulipristal acetate can be used and is up to 95% effective in preventing pregnancy for up to 120 hours post coitus (that’s 5 days). Its mechanism of action is similar to Levonorgestrel and it has a similar side effect profile. Initial guidance in 2012 advised that unlike Levonorgestrel it could not be used more than once in the same cycle as it could disrupt other regular hormonal contraception. The updated guidance from the Faculty of Sexual and Reproductive healthcare now states that Ulipristal can be given more than once in the same cycle, however, its effectiveness may be reduced if the patient has been taking a progestogen either seven days prior or five days after taking it. Breastfeeding women should also be advised not to breastfeed for up to one week after taking Ulipristal as it is excreted in breast milk.
Contraindications to Ulipristal use include uncontrolled severe asthma, Gynaecological cancers and severe liver disease.

The copper IUD provides reversible long-term contraception and is licensed for use as a form of emergency contraception up to five days post UPSI. It causes a foreign body reaction in the endometrium which prevents implantation and studies have shown that copper inhibits sperm motility. It is the most effective form of emergency contraception with a failure rate of only 0.6-0.8%. Most family planning clinics and some GP surgeries can insert emergency IUDs and have dedicated clinics for this. A copper IUD can be inserted at any point in the cycle as long as pregnancy is excluded, four weeks post-partum and two days after a termination of pregnancy. If intended to be used as an ongoing form of contraception it can be left in situ for up to ten years depending on the type of coil used.
Complications can include irregular bleeding especially within the first three to six months following insertion and there is a theoretical risk of infection which usually occurs within 21 days following insertion. IUD expulsion is most common in the first three months after insertion and there is a risk of uterine perforation if it is inserted less than four weeks post-partum. Contraindications to IUD insertion include pregnancy, undiagnosed vaginal bleeding, active infection or pelvic inflammatory disease and uterine fibroids or anomalies distorting the uterine cavity. 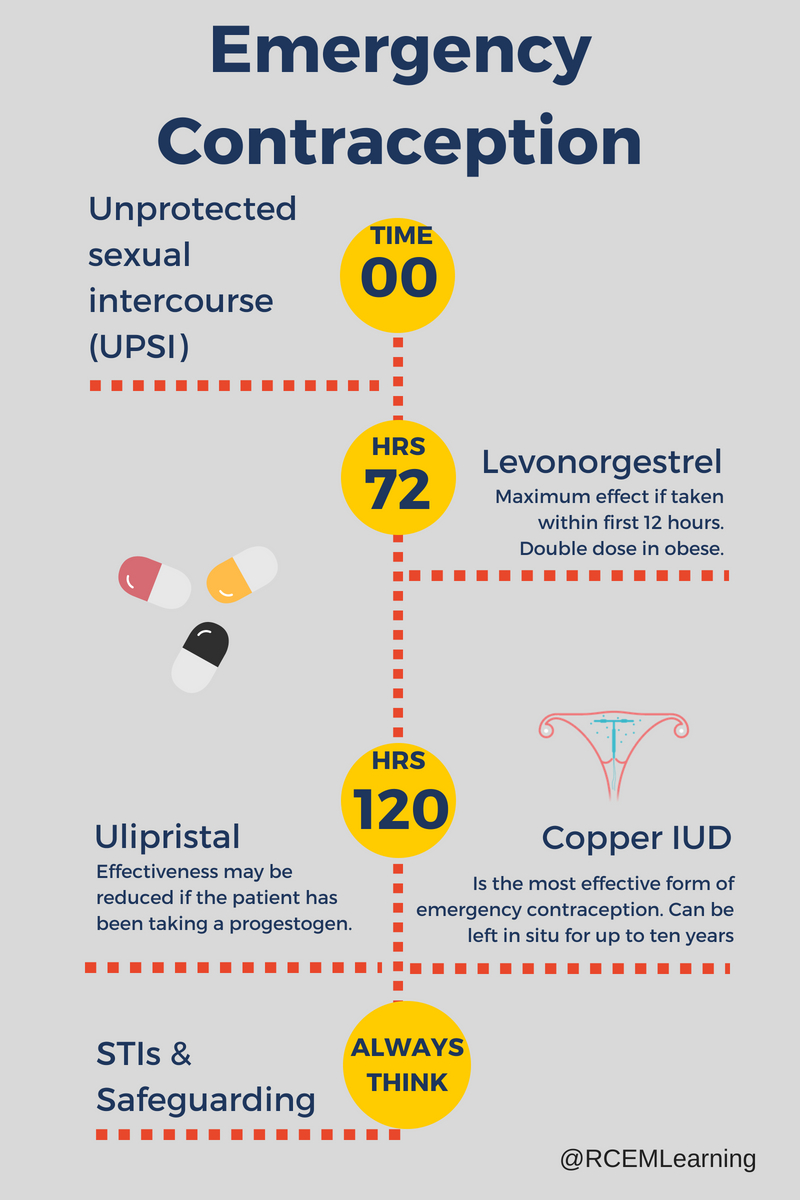 Emergency hormonal contraception can be obtained from family planning clinics, sexual health clinics, GP surgeries, NHS walk in centres and urgent treatment centres and some local and online Pharmacies. Emergency coils can be fitted by most family planning clinics and some GP surgeries.
Remember that emergency contraception does not protect against sexually transmitted infections and dont forget to consider whether your patient requires testing for STIs or has safeguarding needs. In cases of sexual assault contact your local sexual assault referral centre for specialist advice.

PREVIOUSJuly 2018
BACK TO POST
NEXTAnecdote-based Emergency Medicine #2: Abdominal pain
We use cookies to store information to make your visit to this site richer and to personalize information according to your interests. See our privacy policy for more information on what cookies are, how we use them and how to change your preferences.