Bleeding in the first trimester is common occurring in up to 30% of pregnancies and being responsible for 50,000 admissions per annum to hospital in the UK [1].

50-80% of patients presenting with first trimester vaginal bleeding will go on to have normal pregnancies. 1/80 pregnancies are ectopic and require prompt diagnosis and management.

Antepartum haemorrhage (APH) has an incidence of 3.5% of all pregnancies. Antenatal screening has reduced maternal mortality from placenta praevia, yet there remains considerable fetal and maternal morbidity and mortality associated with APH [2,3].

10% of births are of Rh-positive babies to Rh-negative mothers. Consideration and appropriate use of anti-D immunoglobulin is highly cost effective and avoids considerable morbidity and mortality [4].

Ectopic pregnancy occurs where a fertilized ovum is implanted in any tissue other than the uterine endometrium.

Antepartum haemorrhage (APH) is defined as vaginal bleeding occurring from the 24th week of pregnancy and prior to the birth of the baby.

Rhesus D antigen is found on the surface of RBC and is capable of inducing intense antigenic reactions. Individuals without the antigen are determined rhesus negative and are homozygous recessive.

Bleeding in pregnancy can be due to:

There are many identified causative factors and associations. Although none can be translated to provide definitive risk stratification serum βhCG and USS provide valuable information.

Miscarriage is subdivided as follows:

Threatened miscarriage: bleeding or cramping in a continuing pregnancy [5].  The cervical os is closed. An ultrasound scan is required to confirm fetal heart activity.

Complete miscarriage: all the fetal material has passed and the uterus is empty [5]. The cervical os will be closed and where there has not previously been an US scan, one should be performed together with serum βhCG to confirm pregnancy failure [6].

Incomplete miscarriage: there is retained products of conception within the uterus and the os remains open. The patient is at risk of haemorrhage and infection.

Early embryonic/fetal demise (previously known as missed/anembryonic pregnancy/blighted ovum): a non-viable pregnancy at 12 weeks where the products of conception have not been passed.

Miscarriage with infection (previously referred to as septic): this is secondary to either a spontaneous miscarriage or induced termination. Presentation is with fever and foul-smelling discharge.

The psychological aspect of miscarriage is often overlooked in busy emergency departments (EDs) despite the knowledge that many women will have psychological sequelae for several months after the event [8].

Patients presenting with abdominal pain and/or vaginal bleeding and a positive urinary βhCG in early pregnancy should be considered to have an ectopic pregnancy until proven otherwise.

The following are more commonly found in patients with ectopic pregnancy:

Patients with cornual implantation may rupture after 12 weeks with catastrophic blood loss. These patients sometimes present with symptoms of gastroenteritis.

No single sign or combination of signs is diagnostic. Half of identified ectopics are in women with no known risk factors.

Human chorionic gonadotropin (βhCG) is detected in urine as early as one week before an expected menstrual period.

It usually remains elevated for several weeks after a pregnancy has ended.

βhCG is typically lower in ectopic pregnancies than intra-uterine pregnancies for gestational age and in ectopics rises more slowly. This is however not diagnostic [11,12].

Levels above 1000-2000 IU/L in the absence of sonographic signs of pregnancy is considered presumptive evidence of an ectopic pregnancy.

The gynaecologists manage some patients with known ectopic pregnancy expectantly. Usually falling βhCG levels suggest spontaneous involution. It is still possible for these ectopic pregnancies to rupture, and a high index of suspicion should be maintained when these women present to the ED with abdominal pain and/or vaginal bleeding [13]. 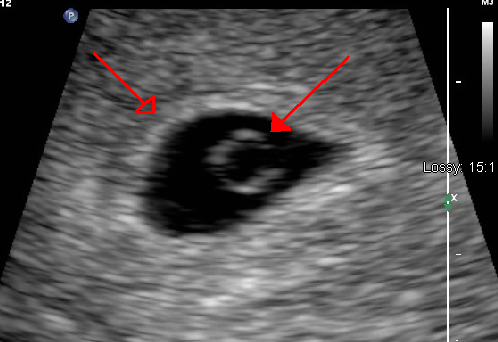 An awareness of the limitations of US is as follows: 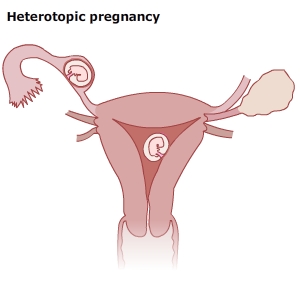 This demonstrates a heterotropic pregnancy. An intrauterine growth sac is present together with an ectopic pregnancy in the fallopian tube in the same patient.

Causes of Bleeding in Late Pregnancy

Vaginal bleeding occurring from the 24th week of pregnancy and prior to the birth of the baby is termed antepartum haemorrhage (APH). There are a number of causes of bleeding in late pregnancy: 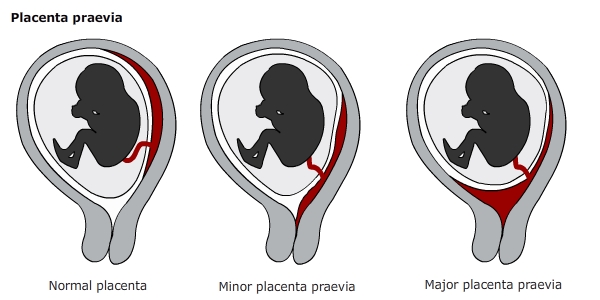 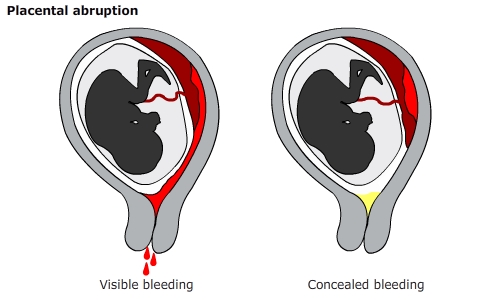 Vasa praevia is a condition in which the fetal blood vessels run freely and unsupported through the membranes, over the cervix across the internal os beneath the presenting part, unprotected by placenta or umbilical cord [19]. 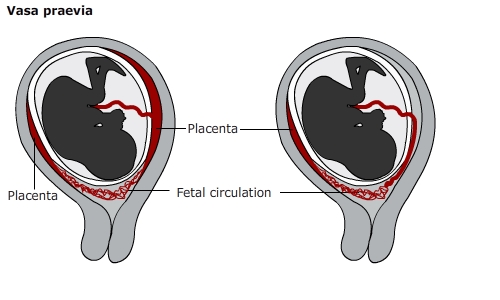 Placenta accreta is abnormal adherence of the placenta to the uterus. It is strongly associated with previous caesarean sections and can be identified on US. It is usually a post partum phenomenon although rarely may cause spontaneous uterine rupture and massive intraperitoneal haemorrhage [22].

Administration of anti-D immunoglobulin to women at risk of Feto-maternal haemorrhage (FMH) reduces the risk of sensitisation. 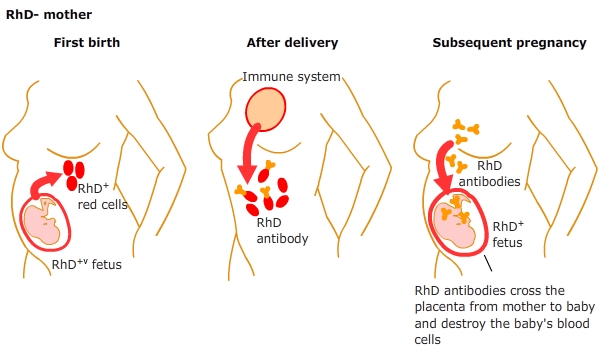 The immune response is:

A multidisciplinary approach to assessment and intervention of the shocked pregnant women is required.

Establish if the patient is shocked:

Use of Doppler and US 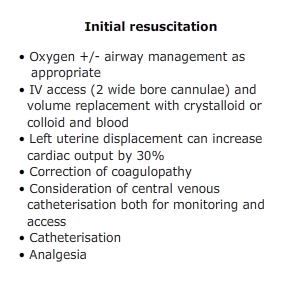 Initial Resuscitation is generic. Specific interventions are directed at the cause of bleeding and are dealt with individually.

The majority of patients presenting to the ED with vaginal bleeding in pregnancy will not require resuscitation. Those that do require a multidisciplinary approach and involvement of senior obstetricians, paediatricians, anaesthetists, intensivists and haematologists should be sought early. Locally devised multidisciplinary protocols for massive obstetric haemorrhage should be in place.

An ABC approach to management is advocated.

Suspected cervical shock: remove products of conception from the os with the aid of a speculum and sponge forceps.

Current guidelines state that Anti-D immunoglobulin should be administered as soon as possible and always within 72 hours of a sensitising event [26].

In pregnancies <12 weeks gestation, Anti-D is only indicated following ectopic or molar pregnancies, therapeutic termination of pregnancy and in cases of heavy or repeated uterine bleeding, or bleeding associated with abdominal pain. The minimum dose is 250IU, and a Kleihauer test is not required.

For potentially sensitising events between 12 and 20 weeks, again the minimum dose is 250IU, and a Kleihauer test is not required.

After 20 weeks, a minimum dose of 500IU of Anti-D immunoglobulin and a Kleihauer test are both required.

Administration of anti-D to rhesus-negative women is required with:

In these circumstances, the dose to administer is:

Administer intramuscularly to the deltoid muscle as soon as possible after the sensitisation event.

After 20 weeks gestation a Kleihauer test should be performed to establish the size of the FMH and additional anti-D given as required. This would not be done in the ED.

As anti-D immunoglobulin is a blood product there will be a small number of patients with particular religious beliefs to whom this treatment is unacceptable.

There is no passive immunisation and no alternative treatment.

Individuals who are already sensitied are identified through an indirect Coombs test.

Failure to diagnose pregnancy. Every women of reproductive age with lower abdominal pain or PV bleeding should have a pregnancy test.

Failure to appreciate the extent of haemorrhage and consider concealed haemorrhage.