Decompression Illness (The Bends) is a disease of compressed gas divers, aviators, astronauts and caisson workers where gas bubbles form in tissues and/or the blood during or after a decrease in environmental pressure.2 In the United Kingdom (UK) this is most commonly seen in divers.

There are two types of decompression illness: decompression sickness (DCS) and arterial gas embolism (AGE). These will be explained in more detail further in the module.

Decompression illness is a disease caused by a reduction in pressure, where gas bubbles form in the tissues or circulation causing damage. It includes both decompression sickness and arterial gas embolism.

The most important concept to understand in diving medicine is pressure. Pressure can be measured in many different units- here we will focus on atmospheres absolute (ATA). At sea level, the pressure is 1 ATA. With every 10m of seawater, this pressure increases by 1 ATA.

Gas laws underpin most of basic diving physics and physiology:

The most important of these in diving and DCI are Boyle’s law and Henry’s law.

BOYLE’S LAW: At a constant temperature, the absolute volume of a fixed mass of gas is inversely proportional to the absolute pressure. 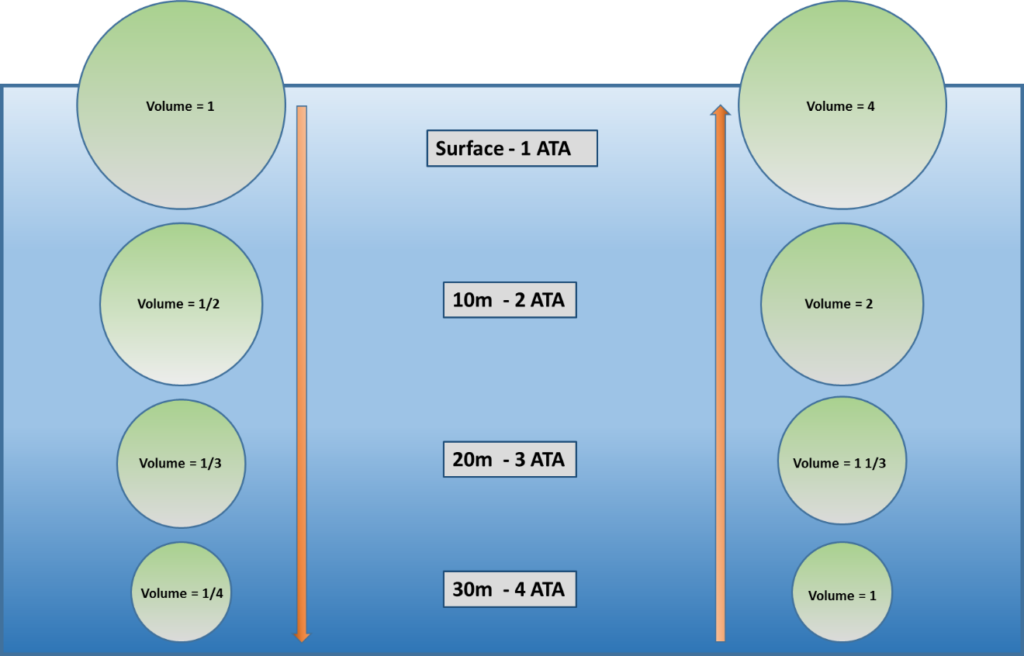 Why are pressure changes relevant in diving medicine?

The most dangerous is pulmonary barotrauma.

HENRY’S LAW: At a constant temperature, the amount of gas that will dissolve in a liquid is proportional to the partial pressure of the gas over that liquid. 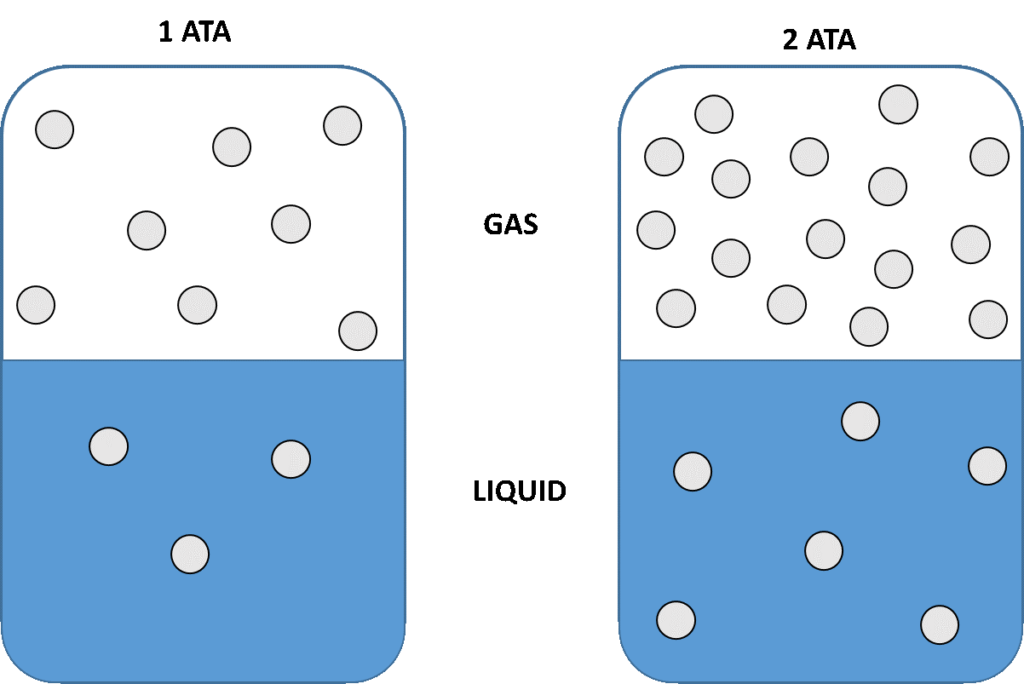 Why are gases relevant in diving medicine?

Nitrogen is an inert gas. This means it is not metabolised by the body and so the content does not change in inhaled and exhaled gas. Nitrogen dissolves in the blood. More nitrogen dissolves at greater partial pressures. As the diver descends, more nitrogen dissolves in to the blood. This is called on-gassing. As the diver ascends, nitrogen comes out of solution. This is called off-gassing. The nitrogen coming out of solution can form bubbles, particularly if divers ascend too fast, or miss any stops on their ascent. These bubbles can lead to decompression sickness (a type of decompression illness).

At depth, i.e. at pressure, the partial pressure of nitrogen increases:

Different divers breathe different gas mixtures depending on the type of diving they are doing. Therefore, varying their exposure to inert gases such as nitrogen. The most commonly used gas is air. However, many divers also use other gas mixes such as: 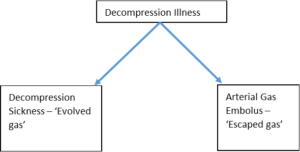 Decompression sickness is caused by nitrogen coming out of solution when a diver ascends from a dive. It is sometimes described as being caused by evolved gas. The inert gas that evolves from the tissues can then cause a mass effect and inflammatory response in that tissue. This can happen anywhere in the body but is commonly seen in the articular cartilage (joints) and nervous tissue especially the spinal cord.

The full mechanism and pathophysiology of DCS is poorly understood and still being researched. It is thought there are two main effects from evolved gas:

Due to these two mechanisms of tissue damage DCI can present anytime from 0-72 hours or more after a dive. The symptoms due to the direct effect of bubbles usually present quickly whereas inflammatory responses can cause a latent response. This also means that DCI can have an evolving course with inflammatory mediated symptoms worsening over time.

Arterial gas embolism occurs when nitrogen bubbles escape in to the arterial circulation. This can result from a few different mechanisms:

i. PULMONARY BAROTRAUMA. This is explained in more detail below.

ii. PATENT FORAMEN OVALE/ ARTERIOVENOUS MALFORMATION (right to left shunt). Any bubbles in the venous circulation which may not normally cause a problem shunt in the arterial circulation and become an AGE.

iii. OVERWHELMING THE PULMONARY FILTER. Most divers bubble after most dives these bubbles usually diffuse in to the alveoli where they are exhaled. If this filter is overwhelmed, for example due to exercise, the bubbles will pass through the lungs without being filtered out and will then pass in to the arterial circulation via the left heart.

Due to the pathophysiology of AGE, symptoms usually have a quick onset and patients need swift recompression in order to reduce permanent irreversible damage caused by tissue ischaemia.

Pulmonary barotrauma is an important condition to remember when dealing with divers. As per Boyle’s law, gas expands in volume as pressure decreases. Therefore the air in a divers lungs expands as the diver makes their way to the surface. If a diver doesnt equalise the pressure (holds their breath on ascent) or has an underlying pulmonary disease (causing gas trapping in the lungs) an over inflation injury can occur. Air from the pneumothorax can then embolise in to the pulmonary circulation, and reach the left side of the heart, to then be pumped in to the systemic arteries. This causes an arterial gas embolism.

Decompression illness can be caused by evolved gas (DCS) or escaped gas (AGE). There are two ways in which bubbles can cause damage to tissues: directly or by resulting inflammatory processes.

How does Decompression Illness present?

Bubbles can form in or move to most parts of the body and so decompression illness can present with almost any clinical picture. In 90% of cases symptoms present within 6 hours of a dive. The sooner, after ascent, that a diver notices a problem, the more likely it is to be DCI and usually the worse the prognosis.

These are some of the more common presentations:

The important things to elicit from a history are:

Divers use many different forms of equipment to deliver air/gas to them to breathe underwater. These are known as circuits and there are three main types:

Closed or semi-closed circuits means a diver will inhale less inert gas throughout their dive meaning that their inert gas load will be less for a comparable diver on an open circuit.

As with any unwell patient, the patient should be assessed using an ABCDE approach.

Once the patient is stable, the most important aspects of a decompression illness examination are:

The following would be at an increased risk of developing DCI:

Decompression Illness can present with almost any symptoms. The majority (90%) of cases come on within six hours of a dive.

Decompression illness is primarily a clinical diagnosis and is assessed with a very thorough and detailed history and examination.

In the emergency department, it is vital to ensure there is no pulmonary barotrauma. This is crucial as it helps with the diagnosis and may need to be treated before a patient receives recompression therapy. A thorough examination and chest x-ray are important. If there is any uncertainty after this then a CT chest may be required to determine if there is any pulmonary barotrauma.

If there is any doubt as to the diagnosis, further investigations may be required to rule out other pathologies. For example, cerebral arterial gas embolism presents very similarly to a stroke a CT head would be useful in this case.

A chest x-ray is often useful to assess for pulmonary barotrauma, although further investigations may be required.

Things you shouldn’t do:

Recompression therapy is the definitive treatment of decompression illness and involves the patient being transferred to a dedicated facility. The patient is re-pressurised in a chamber breathing 100% oxygen at a high partial pressure.

There are 3 main effects of recompression therapy:

i. Bubble crushing: as per Boyle’s law, increasing pressure decreases the volume of bubbles

ii. Flushing out the nitrogen bubbles with oxygen

The most important thing you can do for a diver in the emergency department is put them on high flow oxygen and call the National Diving Accident Helpline (or Divers Alert Network).

Immersion pulmonary oedema is being increasingly recognised as a fatal complication of SCUBA diving. It can occur with any type of immersion, so is also worth bearing in mind in swimmers, and is especially recognised in open water triathlon swimmers.

When a body is immersed in water, the increased hydrostatic pressure causes redistribution of blood to the chest. This increases cardiac filling pressures and stroke volume, and decreases total lung capacity. This increases pulmonary alveolar capillary pressure, increasing transudation of fluid from capillaries to alveolar spaces, and causing pulmonary oedema.

Any condition that predisposes to a relatively high left ventricular filling pressures. Most commonly this is hypertension and heart failure.

Ears can be problematic in divers. Like swimmers, they are prone to otitis externa. They are also at risk of middle and inner ear barotrauma because of the pressure changes they are exposed to.

The middle ear is an enclosed gas-filled space. It is therefore exposed to Boyle’s law and so vulnerable to barotrauma if it is not equalised correctly. This can affect the round window and the oval window, causing subsequent inner ear barotrauma.

To determine the difference between infection, DCI or barotrauma it is imperative that an ear examination is undertaken.

Otitis externa: Most cases will resolve within a few weeks without treatment. However antibiotic ear drops can be useful in resolving the condition quickly. Oral antibiotics are not more effective due to limited absorption. Pain can be an issue so simple analgesia advice should be given. If there is a cartilage involvement an ENT review is advised as these patients may require admission for IV antibiotics. It is important that the ear is kept dry until treatment is complete.

Every year there are at least 25 accidental deaths from Carbon Monoxide (CO) poisoning in England and Wales and over 200 non-fatal poisonings which require hospital admission.

Carbon monoxide has a high affinity to bind to haemoglobin. If there are significant amounts of carbon monoxide present, oxygen carriage to the tissues is seriously compromised, with the heart and the central nervous system being especially susceptible to the abnormally low levels of oxygen. Where carbon monoxide binds with haemoglobin it forms carboxyhaemoglobin (COHB), which does not carry oxygen to the body tissues.

CO poisoning can cause sudden collapse and loss of consciousness within minutes but symptoms may also take time to develop over hours or even days. Sometimes a whole household may be affected.

According to the Department of Health, the commonest symptoms and signs and an indication of their approximate frequency in CO poisoning are shown below4:

Levels of carboxyhaemoglobin in the body are detected by a blood gas which is taken as soon after CO exposure is suspected. The levels found in this blood test will reduce over time so it is important to note when a person with suspected Carbon Monoxide poisoning was removed from the CO source.

In the acute instance it may help increase oxygen delivery to areas in the body where insufficient oxygen is being delivered due to the effects of the CO poisoning.

Hyperbaric oxygen therapy speeds up elimination of the carbon monoxide from the body and helps reduce the damage that it causes within the cells.

Current recommendation is that three HBO sessions are undertaken in the first 24 hours after insult.

The two biggest pitfalls with decompression illness are:

All patients who may have decompression illness, should be started on high flow oxygen immediately regardless of their oxygen saturations. Oxygen is one of the only treatments, other than recompression therapy, which has strong evidence for its benefit.5

It is imperative to call a diving physician for help as soon as possible. Patients with DCI need recompression therapy, and this should not be delayed.

Decompression illness can present with a myriad of symptoms.

Pain and other symptoms in divers are not always due to DCI.

Urinary retention is relatively common with decompression illness so it is always worth having a low threshold for catheterising patients.