This session provides an overview of the assessment and management of patients presenting to the Emergency Department with jaundice.

Jaundice is not a disease but rather a clinical finding denoted by yellow discolouration of the skin, sclera and mucous membranes. Jaundice is caused by the deposition of bile pigment.

Patients may present to the Emergency Department with jaundice in isolation, or with other complaints and symptoms. Alone, jaundice has no adverse effects (except in the neonate).

It is the task of the Emergency Physician to evaluate the cause of jaundice by arranging appropriate initial investigations, and making a decision regarding the need for admission and further investigation and management.

Normal haem metabolism can be divided into 3 stages, pre-hepatic, hepatic and post hepatic:

As Red blood cells (RBC) reach the end of their lifespan (120 days) they pass through the reticulo-endothelial system in the spleen.

The RBCs are broken down by spleen macrophages into Haemoglobin, which is then further broken down into Haem and Globin.

The Globin portion is a protein which breaks down into amino acids.

The Haem portion is initially oxidised to form biliverdin, and then reduced to form Unconjugated Bilirubin. Unconjugated bilirubin travels to the liver, bound to serum albumin.

The majority of Bilirubin is produced from catabolism of haem with 425 and 510 mmol being made every day. 20% of Bilirubin comes from other haem sources, such as ineffective erythropoeisis, the break down of myoglobin in muscle and the breakdown of cytochromes and catalase.

In the liver an enzyme (UDP glucuronyl transferase) conjugates the bilirubin with glucuronic acid to form Conjugated Bilirubin.

Stercolbilinogen converts to Stercobilin and is excreted through faeces. Stercobilin is responsible for colouration of faeces.

Urobilinogen is filtered by the blood and transported to the kidneys where it is oxidised to form urobilin. Urobilin is excreted through urine and is responsible for the colour of urine.

The causes of jaundice can be divided into pre-hepatic, hepatic, and post hepatic aetiologies.

Any process that causes an increased rate of RBC breakdown (haemolysis) and saturation of enzymes can cause jaundice.

Any process which effects liver function can cause jaundice.

Any process which causes post-hepatic obstruction can cause jaundice.

An accurate history and examination will help to identify factors that differentiate the causes of jaundice.

It is important to ask about the following risk factors:

Clinicians should also specifically ask about

A full examination may provide clues as to the cause of jaundice.

A hard nodular liver on a background of known malignancy may indicate metastatic disease.

Fever and right upper quadrant tenderness in association with jaundice are known as Charcots Triad, characteristic of acute cholangitis.

Jaundice will be apparent when the serum bilirubin is 3x above normal. (The normal value of bilirubin is 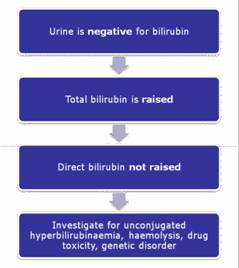 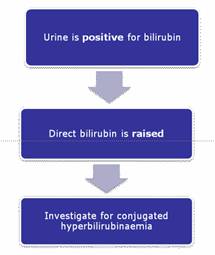 Liver function tests (LFTs) are the central test when investigating jaundice and often point towards the cause. 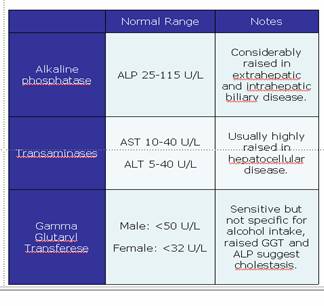 Other blood tests include:

The majority of diagnostic imaging in patients with jaundice will be performed external to the emergency department.

Abdominal USS is a useful initial radiological test to distinguish between hepatocellular and extra-hepatic causes. It is cheap, readily available, lacks radiation and is more sensitive than CT at detecting stones in the gallbladder. The drawback of USS is that it is limited at detecting intraparenchymal disease of the liver or pancreas, and it is operator-dependent.

CT is good at determining intraparenchymal liver and pancreas disease. Neither USS or CT are good at delineating intraductal gallstones.

MRCP is a non invasive, radiation free diagnostic test. It is useful for evaluating the biliary tree, pancreas and liver. The findings of the MRCP will determine whether a more invasive ‘ERCP’ is required.

ERCP may be required to detect disease in the biliary and pancreatic ducts which may be missed on CT and USS. As well as a diagnostic adjunct, it may be used therapeutically to remove gallstones from the biliary tract or to place stents across narrow ducts. The most common and serious complication of ERCP is pancreatitis.

Liver biopsy is used when serum and radiological investigations fail to provide a definitive diagnosis. Liver biopsy is particularly useful in diagnosing autoimmune hepatitis or biliary tract disorders (such as PBC or PSC)

Often the course of jaundice will be indolent and therefore the emergency physician may only be involved in facilitating the initial investigations and management with a decision as to whether the patient should be admitted or discharged. However, it is important to remember that jaundice can reflect a medical emergency. These cases include:

Timely diagnosis, resuscitation and initiation of therapy in these situations should occur. Patients with jaundice and anaemia due to haemolysis require admission.
Patients with raised Alkaline Phosphatase and GGT are likely to have biliary tract obstruction and should have an USS requested in the ED and appropriate surgical/GI referral depending on the findings. Patients with raised AST/ALT have hepatocellular injury and should be admitted if there is evidence of: 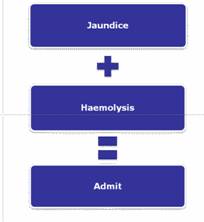 Patients with hepatocellular injury, coagulopathy, and altered mental status may have acute liver failure also known as ‘Fulminant Hepatic Failure’ (FHF).
Patients presenting with FHF require fluid resuscitation, haemodynamic monitoring, and admission to a critical care area for supportive care.
The most common causes of FHF are Paracetamol poisoning (in the UK) and acute Hepatitis B (worldwide).
Prior to liver transplantation, the mortality of FHF was greater than 80%. 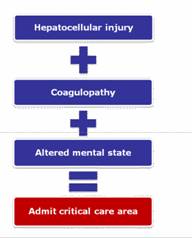 Within 1 hour of overdose

Activated charcoal can be given as decontamination (absorption from the gut is usually complete within two hours).

If the quantity is potentially life threatening, gastric lavage is thought to be useful. Contraindications to lavage are patients who have a compromised, unprotected airway.

Within 8 hours of overdose

N-Acetyl Cysteine is proven to reduce the risk of serious hepatotoxicity.

Indications for consideration of liver transplant:

Any pregnant jaundiced patient should be managed in conjunction with the obstetrician. Patients who present with jaundice in the third trimester may require delivery.

Well appearing neonates with a bilirubin <15mg/dL can safely be discharged home with close outpatient follow-up. Neonatal jaundice can often be physiological due to increased break down of premature erythrocytes and insufficient Glucuronyl Transferase in the newborn liver but jaundice persisting after 2 weeks requires investigation. Neonatal jaundice is treated with phototherapy. Quick and accurate treatment of neonatal jaundice reduces the risk of development of kernicterus, deposition of bilirubin in the basal ganglia. Exchange transfusion is an aggressive treatment to lower bilirubin levels.

This session covers the emergency management of both bleeding in early pregnancy and antepartum haemorrhage (APH) Appropriate investigation and initial emergency interventions are considered including rhesus status and the administration of anti-D immunoglobulin.