Approximately half of Emergency Department attendances by children in the UK are for illness.

The vast majority of these do not have sepsis and the numbers of children and young people (CYP) with serious bacterial infection are also small.  One of the greatest challenges for emergency medicine is to recognise paediatric sepsis without allowing an excessively cautious approach to lead to over-investigation, over-treatment or over-referral.  There are several myths surrounding paediatric sepsis, all of which are debunked in this blog. The adult myths are covered here.

Some of the myths to do with identifying paediatric sepsis include:

Now that I have made it clear that much of what you have been told is either wrong or misleading, the question would seem to be, “how do I recognise sepsis in children?”  Unfortunately that is not an easy question to answer.  No-one can be expected to get it right all the time.  What we can do is explore the five questions behind the questions… 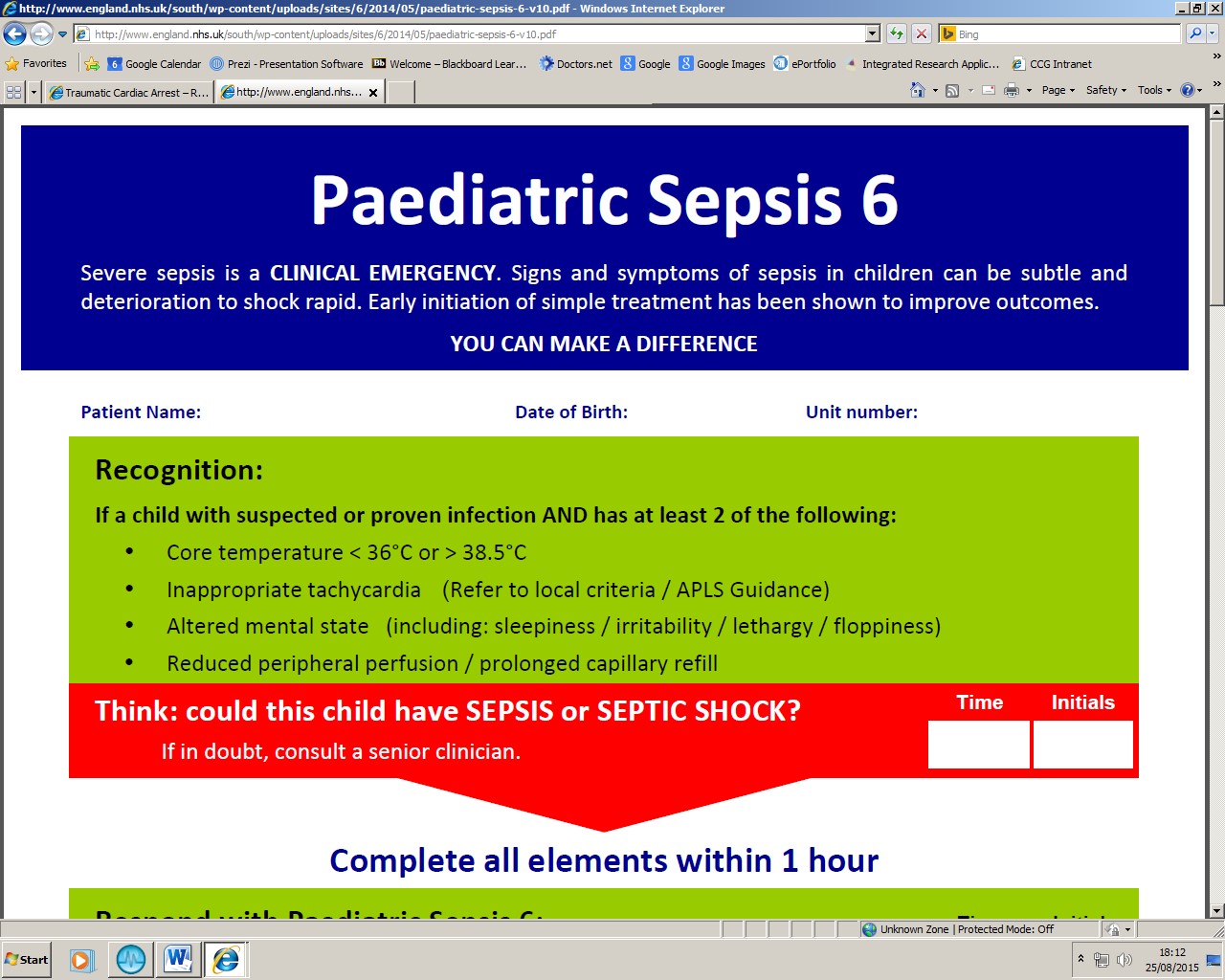 Figure 1 – the first box of the Paediatric Sepsis 6 NHS England document.  Thinking about sepsis is one thing but how do we decide one way or another?

Front line clinicians would welcome a decision tool that identified and ruled out sepsis and serious bacterial infection with reasonable sensitivity and specificity.  Unfortunately no such decision tool exists.  On a very basic level, all the available guidelines and decision tools simply do two things which we can all get behind:

A close look at the Paediatric Sepsis 6 (Tong, 2015) toolkit reveals an appropriate uncertainty about how to decide whether a child needs referral or treatment.  Even the criteria suggest that sepsis should be considered are open to interpretation.  So the question is, “What are we missing?”  The answer is a robust way to decide how to rule sepsis in or out in children.  There’s no simple answer to that yet but there is enough knowledge to answer these key questions:

Before answering these questions we should just quickly define some terms:

Sepsis is itself difficult to define.  Attempts to do so often refer to systemic inflammatory response syndrome (SIRS) in the presence of infection.  In reality this simply amounts to saying that there is an abnormal temperature, heart rate or respiratory rate and the obvious cause seems to be infection.  The reality is that when clinicians are talking about sepsis, they usually mean infection that is having a systemic effect and risks causing morbidity or mortality.  This can be caused by any infection and is not restricted to bacterial pathogens.  Many significant infections such as influenza fulfil the criteria for sepsis.

Tachycardia and other abnormal physiological parameters are also somewhat uncertain in their definition.  Two major publications (Fleming, 2011) (O’Leary, 2015) have now shown that the available reference ranges are in need of updating.  What would be even better would be the availability of charts or apps which gave the clinician a centile result for a heart rate or respiratory rate at any given age.  Using age bandings leads to significant drift from the normal ranges as shown by these papers. [Also see: (May, 2015)]

What is different about recognising sepsis in children?

Sepsis is sepsis but children are very different from adults and so recognising paediatric sepsis needs to work with these differences.  Children have labile physiological responses to minor illnesses.  Their immune systems are more aggressive in response to viral infection, to compensate for the fact that they do not usually have ready-made antibodies for each new pathogen that they encounter.  (Neonates are an exception to this rule – see below)  These factors mean that there can be large swings in temperature and heart rate with a simple viral upper respiratory tract infection.  Thus, experienced clinicians tend to see abnormal physiological parameters as a prompt to look for other signs of sepsis rather than being evidence of sepsis in its own right. When a child is feeling a bit better, they will usually quickly demonstrate this by running off to play, while tucking into a snack and a drink.  So signs of wellness are often used to decide that a child is not septic – the “rule in/ rule out” approach.

What has been shown to be unhelpful in screening for sepsis in children?

It would make things so much simpler if there was a blood or urine test that ruled in or ruled out sepsis.  Unfortunately this does not exist.  CRP and other commonly used inflammatory markers can be normal despite significant infection.  The more acute the illness, the less time the markers have had to respond, leading to a paradoxical increased risk that such tests will be falsely reassuring. (Segal, 2014)  It is best to use clinical suspicion, not tests to identify sepsis.

What has been shown to be valid in an Emergency Department setting?

The danger of looking at the issue from the end-point is that it usually involves a very select population, rather than also considering the large numbers of children who do not have sepsis.   One study looked at a large number of ED attendees (Sukanya, 2013) using the NICE Guideline “Feverish illness in children.” (NICE, 2013) This study showed a sensitivity of 86% and specificity of 29% for the detection of any serious bacterial illness when the amber and red categories were combined into one group.  Such poor specificity without the benefit of a high sensitivity demonstrates the difficulties of recognising serious bacterial infection in children, let alone sepsis.

In the absence of a rule with high specificity, Paediatric Sepsis 6 gives less guidance on identifying sepsis but more on how to treat sepsis once the decision has been made.  Their approach attempts to improve the outcome of those children who do turn out to have sepsis.  The effect of any increase in aggressive management on the population of febrile children as a whole has yet to be evaluated.

There are no clinical guidelines or decision rules that accurately rule in or rule out sepsis.  The ED clinician must make sure that they not only read any national and local guidelines but also understand the nuances and complexities that are involved.  In practice, decisions often rely on the experience of the clinicians involved so if sepsis is a possibility it is wise to involve a clinician who has had significant exposure to seriously ill children in an ED setting.

What are the high risk patient groups or situations I might encounter?

The general approach to making decisions regarding sepsis in paediatric emergency medicine does not work for certain patient groups which have different risk factors and have an atypical response to illness compared to the majority of children.

Neonates: There is good reason why the NICE febrile child guidelines has special rules for the under 3 month old.  This age group relies heavily on the immunoglobulins they have obtained in utero.   Usually the first few months of life are free of infections thanks to this donated immunity.  When infection does occur, the likelihood of bacterial infection and sepsis.  In addition to this the younger the baby, the less likely they are to give clear signs of illness.  More often the indicators are vague and come in the form of reduced feeding or being sleepier.  Clinicians should view any sign of illness or fever in the under 3 month old with suspicion.  Under the age of one month, illness is sepsis until proven otherwise.

Children with neurological problems: Assessment becomes difficult when the child’s baseline activity is affected by any pre-existing neurological impairment.  In addition to this such children may not respond as expected in times of illness so signs such as tachycardia and even fever may be absent.  In this patient group the clinician must rely heavily on the opinion of the child’s usual carer.  It is also useful to ask about previous episodes of serious illness, how they presented and what the outcome was.

Children with immunodeficiency: Any child with immunodeficiency has a much higher chance of serious infection and a reduced ability to respond to any infection.  The index of suspicion is therefore high and the need to intervene early is great.  This patient group includes known immunodeficiency (acquired or congenital) as well as those caused by treatments such as chemotherapy or long-term steroids.  Also note that the diagnosis of immunodeficiency may not yet have been made, so treat the child with a significant number of serious infections with caution.  (This does not include the child whose parents report multiple “chest infections” treated with oral antibiotics, none of which caused the child to be significantly unwell.)

The child with chickenpox: Varicella infection is usually uncomplicated and in many cases causes minimal symptoms.  A small number of children develop sepsis.  If a child is unwell, significantly febrile or getting worse after a few days of chickenpox, sepsis is a real possibility.

As a rule, any child who is not expected to mount a normal immune response or who may not easily show signs of being unwell should be considered more carefully for possible sepsis.

What do experienced clinicians believe to be of value when making the decision to discharge or treat?

As with most paediatric assessments, the consideration of possible sepsis requires the clinician to take into account a variety of factors including:

Observations and clinical examination might be enough to rule in sepsis on grounds of suspicion:

Course of illness may reassure or deepen suspicion:

Behaviour and activity are essential parts of the assessment as they tell the clinician about the effect that an infection is having on the child:

Keeping the possibility of reassessment open allows the clinician to mitigate the risks of over and undertreating.  A period of observation works well for the child for whom the evidence is ambiguous.  This allows the child to ‘declare themselves’, often by becoming dramatically better following an antipyretic and a few sips of fluid.  It is important to keep a careful watch during

observation periods so that if indicated, treatment can begin urgently.  This should only take place if the uncertainty is backed by experience.

Referral or senior review is a helpful way of continuing to ask the question “Could this child have sepsis?”  If uncertain, ask for another pair of eyes on the patient.

Safety-netting advice is important for the children who have earned discharge from the ED. (May, 2014)  Remember that many children who present with sepsis have been seen recently by another clinician. (Thompson, 2006) Although they may not have been septic at the first encounter, it shows that there is an important opportunity to ensure that the child who does deteriorate has a timely reassessment.  It is important to include advice about the expected course of illness, how to recognise deterioration and the urgency with which reassessment should be sought.

So although recognising sepsis in children is not as easy one would hope, it is possible to recognise well children and seriously ill children most of the time.  Special cases (neonates, immunodeficiency etc.) should be reviewed by a senior ED clinician or referred when unwell.  For the febrile tachycardic patients who seem too well to be septic, observation/senior involvement or referral are options.  One piece of work currently attempting to identify the best ‘rule out’ activities that children display (e.g. I-phone positive) is taking place currently – for further information on this contact the author.

PREVIOUSSeptember 2016: New in EM
BACK TO POST
NEXTCreating flow in your ED