There is extremely wide geographical variation in the organisation of out-of-hours dental services provided in the United Kingdom. In many parts of the UK there are no formal out-of-hours care arrangements for unregistered patients, even at weekends.

It is little wonder in this confusing time, patients with dental emergencies attend the Emergency Department, as they feel they have nowhere else to turn. In fact presentations of non-traumatic dental problems can account for between 0.3 and 0.5% of ED attendances [2].

A recent study has shown that while junior doctors in the ED are seeing dental problems on an almost weekly basis, up to half of juniors have had no formal training in examination of the mouth, are unable to identify the timings of deciduous and permanent teeth eruptions and only 29% could describe the optimal management of a dental infection [3].

Although dental problems are a common presentation, junior doctors in the ED have inadequate knowledge and are poorly prepared to deal with the most common problems encountered.

The adult human has 32 permanent teeth divided as (anterior to posterior) incisor, canine, pre-molar and molars. We are not born with this number nor do our original teeth remain for long past childhood. 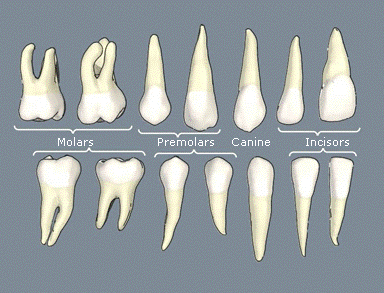 The gross anatomy and orientation of the permanent teeth

Each tooth can be simply divided into crown and root, the clinical crown being that part of the tooth which is visible within the mouth and the root being that which is not. The majority of the crown is composed of dentine surrounded by enamel with an inner pulp chamber; the root is also composed mainly of dentine with pulp channels within. The pulp contains the neurovascular structures of the tooth, and it is here where dental pain originates.

The surface of the tooth responsible for the chewing or cutting of food is known as the occlusal surface, these surfaces often contain elevations known as cusps, contributing a significant proportion of the tooths surface.
The teeth are maintained within the mandible and maxilla by the periodontium, this is comprised of four tissues, alveolar bone, cementum, gingiva and the periodontal ligament (PDL). The alveolar bone is the thickened ridge of bone that contains the tooth sockets. The PDL attaches the tooth to the alveolar bone in which it sits. The PDL has a role in the stabilisation of the tooth during chewing and also has propioceptive properties.

The gums (gingiva) are composed of dense fibrous tissue, closely connected to the periosteum of the alveolar processes, and surrounding the necks of the teeth. 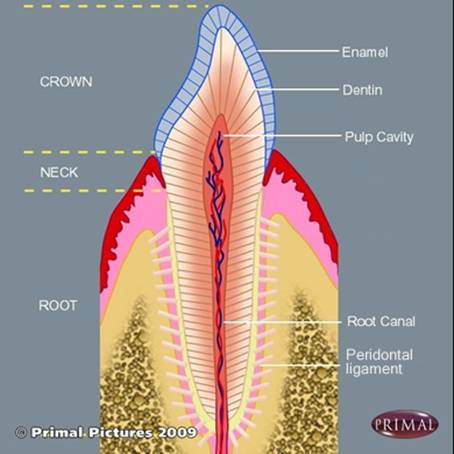 The basic composition of a tooth and its surrounding structures

Acute dental abscess usually occurs secondary to dental caries or following a dental procedure or trauma. The most common cause, dental caries, is caused by erosion of enamel by acids produced as a by-product of fermentation of dietary carbohydrates by normal bacterial flora. This introduces bacteria into the tooth, which spreads firstly into the pulp then to the root and local tissues. Infection then may spread superficially into the tissues producing gingivitis or a dental abscess. Very occasionally infection spreads to the deep facial planes forming a retropharyngeal abscess or Ludwigs angina.

Dental abscess is usually polymicrobial with numerous pathogen combinations being recognised, common pathogens include Streptococcus sp. Along with Staphylococcus sp, Staph.aureus has been isolated in up to 15% of abscess cultures, MSSA in 90% of these cases and MRSA in 10% of these case [16,17], with the most common anaerobic species being Prevotella sp (10-87 % of dentoalveolar abscesses) [4].

Dental infection most commonly arises from the process of dental caries and is usually polymicrobial with both aerobic and anaerobic bacteria being responsible.

In the busy environment of the ED history taking needs to be concise and focused, giving opportunity to highlight worrying features. Below are the salient points that should be included in the history.

Not all pain in the mouth is not dental in origin. Be aware of radiation of pain from other areas, particularly the heart.

Examination of the mouth

The initial examination must include an ABC assessment as, rarely, dental infection may be complicated by airway obstruction. The presence of any of the following may indicate actual or impending airway compromise and should prompt an urgent senior anaesthetic assessment:

Dental infections may be complicated by airway compromise and need urgent anaesthetic intervention.

A general examination and set of observations including temperature, blood pressure, pulse, respiratory rate and oxygen saturations will identify signs of systemic disturbance.

Examination of the face

Examination of the mouth

For an adequate examination, it is essential to use a bright light, tongue depressor and mirror. 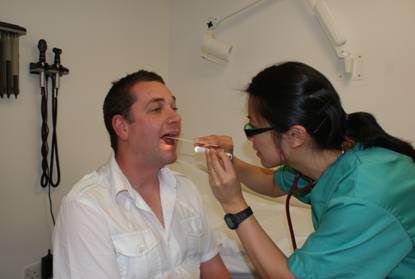 Swelling of the pharynx or under the tongue are serious signs that indicate spread of infection into the deeper tissues.

Worrying Features in the History and Examination

During the course of the history and examination, the clinician may identify features that suggest a more serious problem. If any of these features are present consider seeking advice from a senior colleague, anaesthetist or maxillofacial specialist as appropriate.

Blood tests are very rarely helpful in the diagnosis or treatment of dental infection unless the patient is immunocompromised or there are signs of significant systemic upset. For uncomplicated infections there is no role for blood tests in the ED.

The role of imaging in the ED is limited and not indicated for the investigation of most dental infections. If required it should only be requested following consultation with a maxillofacial specialist. 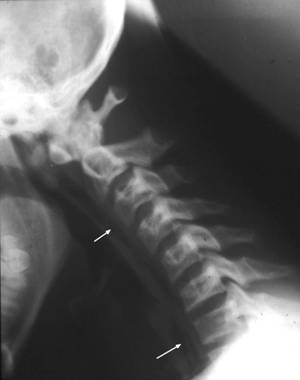 Investigations are of little use to the management of most dental infection in the ED. A thorough examination should provide all the information needed to treat these patients

The provision of analgesia in the ED simply serves as a temporising measure until the source of pain is treated i.e. a dental practitioner can be seen.

Once non-dental causes of pain have been ruled out, judicious use of analgesia is required and identification of the source of the pain. Non-steroidal anti-inflammatory drugs (NSAIDs) are the recommended first line analgesics for dental pain with ibuprofen being the drug of choice due to its low incidence of gastrointestinal side effects [5].

Paracetamol also has a role to play both as an analgesic and anti-pyretic, either in addition to a NSAID or when NSAIDs are contra-indicated.

Opiod analgesia is traditionally used in moderate and severe pain, however opiates are relatively ineffective when dealing with dental pain [6]. Opiates should therefore be reserved for adjunctive analgesia in situations where paracetamol and NSAIDs have failed to achieve adequate pain relief.

The vast majority of patients with toothache presenting to the ED should be managed with simple analgesia and advised to attend a dental practitioner as soon as possible. 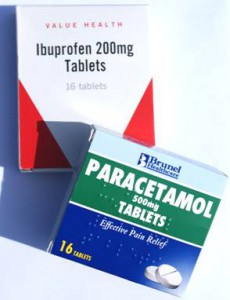 This is one of the most common dental problems presenting to the ED. Common symptoms and signs include pain, localised erythema, periodontal and facial swelling and direct tenderness to palpation of the responsible tooth.

Once appropriate analgesia has been administered the question arises as to whether to prescribe antibiotics. Considerable variation exists in practice as demonstrated by one study which found that antibiotic prescribing for dental problems ranged from 68% (patients attending a medical practitioner), to less than a third of patients attending a dentist [7].

The type of antibiotic prescribed also varies greatly; 90% of prescriptions in one study were for either amoxicillin, metronidazole or penicillin V [8].

Are antibiotics indicated in my patient?

National antibiotic prescribing guidance for dental problems [11,12] states that antimicrobials should be only given to patients with:

Antibiotics are generally not indicated for otherwise healthy individuals or when there no signs of spreading infection. They do not form the mainstay of treatment of local infection and early management of the source must be a priority.

Antibiotics should only be prescribed for dental abscess where there are signs of systemic infection or in patients who are at a high risk of complications.

Which antibiotic should be prescribed?

If prescribing an antibiotic, first line treatment is amoxicillin or metronidazole for a total of five days. For those patients who are penicillin allergic, erythromycin is no longer recommended due to high levels or resistance, instead first line is clarithromycin for five days duration [20]. If, after 48 hrs, there is no improvement in systemic symptoms, consider changing to second line therapy; either adding metronidazole 400mg twice daily or changing to co-amoxiclav 625mg.

First line antibiotic treatment of dental abscess consists of either amoxicillin or metronidazole.

Does this patient need admission?

Very few patients presenting with dental infection require referral and admission to hospital but it is important to recognise those that do. The presence of any of the following should prompt urgent referral to a maxillofacial specialist for consideration of admission:

Two uncommon but important diagnoses not to be missed in patients attending the ED are Ludwigs and Vincents angina.

Ludwig’s Angina is a potentially life threatening complication of untreated dental infection. It is a rapidly progressing submaxillary, submandibular, and sublingual necrotizing cellulitis and can lead to airway obstruction and death. It requires an early diagnosis and treatment which may include an urgent surgical airway if the airway is compromised [13].

Two thirds of cases of Ludwigs angina are odontogenic [14], anterior teeth often being the starting site for sublingual infection and 2nd and 3rd molars are a starting point for submaxillary space infection [14]. The presentation is variable, but typical symptoms such as dysphagia, neck pain and tooth pain, while signs include tongue elevation and/or protrusion and neck swelling [15]. Trismus is usally absent unless there is spread into the parapharyngeal space. Patients frequently have comorbidities such as diabetes, HIV or are immunosuppressed [14].

There may also be signs of airway obstruction such as stridor and dyspnoea. 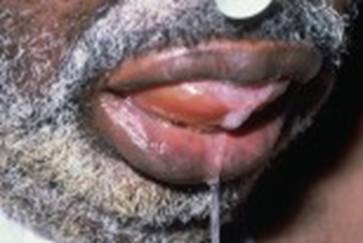 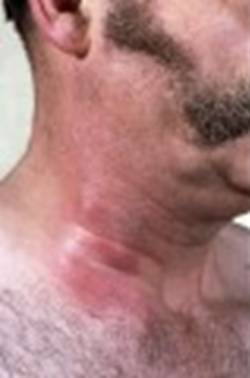 Swift recognition and aggressive and early intervention is paramount. Airway safety is the primary concern, followed by administration of intravenous antibiotics and consideration of surgical drainage. It is vital that, in addition to a maxillofacial specialist, an experienced anaesthetist and otolaryngologist are involved. Antibiotic therapy should follow the guidance already outlined for dental abscess.

Ludwigs angina can rapidly progress to airway compromise. Early recognition is the key to treatment.

Vincents angina, also known as trench mouth or acute necrotising ulcerative gingivitis, is defined as an acute febrile, pseudo-membranous inflammation of the gingiva secondary to bacterial infection. The aetiology is unclear but is thought to be due to superinfection with anaerobic bacteria such as bacteroides, fusobacterium and spirochetes which are normal mouth flora. It is now more commonly found in patients with immunodeficiency states such as malnutrition and HIV infection.

The infection starts as inflammation usually on one side of the mouth which spreads along the gingival margins and may affect the pharynx and lips. This leads to gum atrophy, ulceration, enlarged lymph nodes and formation of a grey pseudo membrane, which may lead to it being confused with diphtheria.

Emergency department treatment consists of chlorhexidine mouth washes, a 3 day course of metronidazole or amoxicillin and encourage improved oral hygiene. Patients should be advised that they need urgent assessment and management by a dentist.

Pitfalls in the management of dental pain and infections include:

PREVIOUSAlcoholic Liver Disease
BACK TO POST
NEXTDelirium in the Elderly