The electrophysical basis of lightning is complex. Lightning is neither direct nor alternating current. It can be regarded as a unidirectional current impulse. The temperatures within a bolt can be massive (8000-22000 C). The energy dissipated when lightning strikes the ground is sufficient to fuse silica resulting in the stone known as fulgurite. Fortunately lightning strike tends to splash over the victim. Consequently deep penetrating burns rarely occur. Thermal injury tends to be superficial.

Direct strike is surprisingly rare but may have the greatest mortality. More commonly injury is thought to result from ground current spread. Lightning strikes the ground and spreads out to involve those in close proximity. Lightning may also splash sideways from an object or a victim may be holding onto an object which is struck.

Lightning can produce blunt trauma. A victim may be thrown by muscle contraction or blast trauma may result from an associated thunderclap.

Lightning tends to hit the tallest object and objects which are standing in isolation. Lightning strike can also occur indoors with conduction via electrical wiring or plumbing. Seeking protection during an electrical storm beneath a tree or in some form of outdoor shelter may actually increase the risk of being hit.

Lightning deaths are caused by cardiac arrest, usually asystole. As with electrical injuries the occurrence of respiratory arrest can give rise to hypoxia and subsequent cardiac arrest.

Lichtenbergs flowers is a characteristic dermatological skin phenomena caused by lightning strike. A transient fernlike erythematous floral pattern develops on the skin. It doesnt represent a true thermal burn and fades within 24-36 hours.

Lightning injuries are difficult to diagnose. Victims are often amnesic and the actual moment of lightning strike is usually unwitnessed. The table below highlights the more common features. 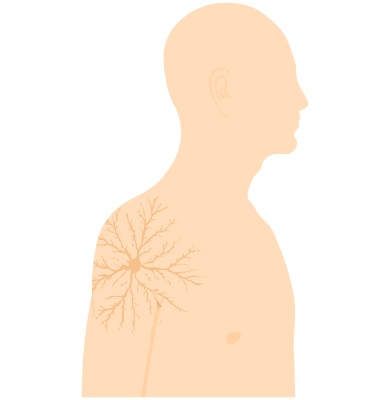 These patients may appear confused and have been found outside in stormy weather. The differential diagnosis includes any cause of an acute confusional state.

The management of lightning strike closely parallels that of electrical injury. Patients should be assumed to have suffered significant trauma, including cervical spine injury. Management follows the ABC principles. Cardiac arrest is managed along ALS guidelines. Ventilatory support may be required for apnoea.

The risk of malignant dysrhythmias, such as ventricular fibrillation or ventricular tachycardia, is greatest at the time of injury. The incidence of late dysrhythmia is not known but is thought to be very low. A six year review of fatal electrocutions in Delhi found that 150 of the 153 fatalities died at the scene. A further two died of septicaemia and one died of a dysrhythmia that was present on admission [4].

By the time of presentation to the emergency department the risk of a malignant dysrhythmia is low. An Australian study of 212 consecutive presentations of low voltage electrical injury demonstrated transient conduction abnormalities in only 4% of patients following 6 hours of ECG monitoring. The authors went on to develop a protocol whereby patients who sustained a low voltage injury and had a normal baseline ECG did not undergo further monitoring. No ill effects resulting from this policy were observed [5].

Traditionally, patients who sustain high voltage injuries (>1000volts), lose consciousness, have a transthoracic current pathway or an abnormal baseline ECG are thought to be at higher risk of dysrhythmia and consequently undergo cardiac monitoring. The necessity and duration of cardiac monitoring in this so called high risk group is subject to debate. A Canadian study performed 24 hours of continuous cardiac monitoring on 134 high risk patients. No lethal dysrhythmias were observed during the 24 hour monitoring period [6].

The value of troponin or CK MB measurement in electrical injury is unclear. Baseline and 12 hour troponin measurement may be carried out if high risk features are present. The clinical significance of elevated troponin is uncertain.

Monitoring of the foetus by cardiotochography (CTG) is advisable for pregnant women over 22 weeks gestation. An obstetric consultation should also be obtained.

The management of severe lightning injuries within the emergency department and the prehospital setting can be complex. Patients may require advanced life support with immediate treatment of cardiac dysrhythmias In addition simultaneous treatment and assessment is required for associated injuries.

Simply considering surface burns may result in gross underestimation of the extent of internal thermal injury. Prediction of the current pathway by examining entrance and exit burns allows appreciation of which internal structures may have been involved.

Adherence to traditional resuscitation formulae for thermal burns can result in insufficient fluid administration. Administration of large volumes of fluid (often much larger than initially appreciated) may be required to compensate for large internal fluid losses into damaged tissues. Haemodilution from aggressive administration of crystalloid may require blood transfusion to ensure adequate circulating haemoglobin

Early establishment of invasive monitoring is useful to assess and guide fluid resuscitation.

Analgesia is required for all patients with electrical thermal injuries. Cutaneous burns should be photographed, dressed and where appropriate elevated. Plastic surgical consultation is required but should not delay or interfere with ongoing resuscitation.

Compartment syndrome should be actively sought but can be difficult to distinguish from muscle ischaemia secondary to vascular injury. Vasospasm of limb arteries may be transient but arterial thrombosis may present with distal ischaemia and infarction. Distal pulses, limb temperature and pain should be assessed regularly. Vessel injury requires vascular surgery consultation.

Skeletal muscle damage results in electrolyte derangement and myoglobin release. Serum potassium, phosphate, calcium and creatine phosphokinase measurements are necessary and should be repeated if rhabdomyolysis is a possibility. Hyperkalaemia poses the main threat to myocardial stability.

Myoglobin release produces a brown discolouration of the urine and impairs renal tubular function. Dipstick analysis of urine will demonstrate a false positive finding for haematuria in the presence of myoglobin. Maintenance of adequate renal perfusion by restoring circulating volume and blood pressure helps to prevent renal failure. Alkalisation of the urine may also have a role. Ultimately if renal failure ensues, haemofiltration may be required.

Patients who are suspected of being struck by lightning should be admitted to hospital to a monitored bed. Delayed arrhythmias following any form of electrical injury is rare.

The presence of arrhythmias should lead to a period of monitored observation. Women who are more than 22 weeks pregnant should undergo obstetric assessment.

Electrical burns should be managed like any other burn, but the threshold for admission and review should be lower as the burns are often deeper than purely thermal burns.

A patient who has suffered a lightning strike can be difficult to diagnose. They are often found outside in an acutely confused state in stormy weather.

The assessment of abdominal trauma is notoriously difficult. Serious intra-abdominal injuries may initially appear to be innocuous and localisation of symptoms is variable.