It usually causes less haemodynamic instability than upper GI haemorrhage, however, it can present as a wide spectrum from trivial bright red blood per rectum to massive haemorrhage with shock. As such, the bleeding can be catastrophic and should be considered as a potential surgical emergency, with mortality rates reportedly as high as 21% in those with massive GI haemorrhage* (4). However, in the majority of cases bleeding stops during initial resuscitation, allowing time for further investigations to elicit the exact source and cause of bleeding, with an overall mortality rate of around 2-4% (5-9).

Lower GI bleeding is defined as bleeding distal to the ligament of Treitz, i.e. some of the small bowel, the colon and the rectum, which presents with the passage of bright red blood per rectum (haemotochezia) without the presence of blood in gastric aspirate. Acute lower GI bleeding is of recent onset and may be severe, resulting in haemodynamic instability and decreasing haemoglobin levels. The diagnosis is often difficult to make and may require multiple investigations to identify the source of bleeding.

All patients with a suspected acute lower GI bleed should be assessed as a matter of some urgency as there can be significant mortality (up to 20%) [1,2,3].

A thorough history and examination are essential to try and help identify the source of bleeding, make some assessment as to the amount of bleeding which may have occurred and to ensure adequate resuscitation is instituted. Patients who present with acute, lower GI haemorrhage may complain of passing bright red blood per rectum or find it difficult to describe and it is useful to clarify the exact nature of the blood by the frequency, colour and the presence or absence of clots. However, it is important to remember that although melaena (dark tarry stool) indicates an upper GI or small bowel source and fresh, red blood generally indicates bleeding from the left colon or rectum, this is not always the case. A massive upper GI bleed can result in haematochezia
Other symptoms such as fatigue, chest pain, palpitations, and shortness of breath as well as any past medical history should be elicited. Certain symptoms may help to distinguish between inflammatory, infective and malignant causes, such as abdominal pain, weight loss, fever, diarrhoea, or vomiting. Medication use is also of relevance in particular any use of warfarin, heparin, NSAIDS and inhibitors of platelet aggregation, as some of these may require urgent reversal.

A thorough physical examination is important to assess the amount of blood loss and degree of shock, the possible source, and other medical conditions, which may play a role in the morbidity and mortality and potentially affect future investigations.
Initial observations such as dyspnoea, tachypnoea, tachycardia, and in particular postural drop in blood pressure are important and may indicate more significant blood loss and shock.

The presence of abdominal tenderness on examination may help to suggest that the source of bleeding is more likely to be secondary to an inflammatory disorder such as ischaemic colitis. A PR examination MUST be performed in all those suspected of GI haemorrhage, not only to assess the stool colour/presence of blood, etc but also to look for anorectal lesions.

As most episodes of lower GI bleeding settle spontaneously, the early identification of high risk patients will allow for a more selective delivery of urgent therapeutic interventions.

One study developed the BLEemergency department classification system which allows the triage of patients into high or low risk groups of adverse in-hospital outcome (recurrent haemorrhage, need for surgery to control bleeding and death) [12]. Another study developed the BLEED classification system [1]. Any patient with any of the criteria in tables above were deemed to be high risk.

Even though there is no well validated risk classification system, any patient with haemodynamic instability is at high risk for severe bleeding.

Despite the low quality of evidence, the American College of Gastroenterology advises using the risk factors from these studies to help distinguish patients at risk. Risk factors of poor prognosis mentioned include: being elderly, those with co-morbidities, on aspirin & those presenting with low BP/HR. [14]

The Scottish National Guidelines committee have also issued clear guidance for admission in the following table below: [17]

The pathophysiology of lower GI haemorrhage can best be understood by looking at the potential causes.

The commonest cause of lower GI bleeding involves the colonic diverticula with diverticulosis as the source of bleeding. It is uncommon in those under the age of 40 years but there is more than a 200-fold increase from the age of 20 to 80 years (13). It has been shown that asymmetric rupture of the vasa recta at the dome of the diverticulum, with intimal eccentric thickening and medial thinning can be found at or near the bleeding point, with trauma thought to play a role in predisposing the diverticula to bleed (11-12).

Diverticular disease is the commonest cause of acute lower GI haemorrhage in the elderly.

Ischaemic colitis is the most common form of intestinal ischaemia and in most cases is transient and reversible. The colon is predisposed to ischaemic insult due to its poor collateral circulation, low blood flow and high bacterial content with the splenic flexure, recto-sigmoid junction and the right colon more frequently involved.
This diagnosis should be considered in patients presenting with abdominal pain and bloody diarrhoea.

Older adults are most likely to experience ischemia-related colitis because of underlying risk factors such as relative hypotension, heart failure, and arrhythmias [14].

A simple stool culture could reveal infective causes such as Salmonella, Shigella andCampylobacter.

Neoplasia (both carcinoma and polyps) can produce acute lower GI haemorrhage, although this more commonly presents with occult blood loss.
Colorectal cancer is common in the UK and a frequent cause of cancer deaths. Incidence increases with age and a family history of bowel carcinomas is common.

As well as rectal bleeding, left sided large bowel carcinomas frequently cause altered bowel habit and abdominal pain.
Other causes of rectal bleeding such as colitis can predispose patients to developing neoplastic lesions.

A digital rectal examination can save lives by identifying a rectal carcinoma.

Angiodysplasia is another cause of acute lower GI haemorrhage and is an acquired malformation of intestinal blood vessels with ectatic vessels in the mucosa and submucosa (4). Dilated vessels or cherry red, flat lesions are seen at colonoscopy. Approximately 80% of these lesions occur in the right side of the colon, may be multiple and can be associated with valvular heart disease and other systemic diseases, although there is little evidence to support this. Angiodysplasia most commonly presents with iron deficiency anaemia and occult blood loss due to slow but repeated episodes of bleeding and are often found in asymptomatic individuals or as an incidental finding on colonoscopy in up to 5% of cases (13). Overt bleeding from angiodysplasia when it occurs is typically brisk, painless and intermittent

Other causes of lower GI bleeding include:

As with most things seen in the emergency department initial assessment and resuscitation should coincide. Investigations are shown in the table below. 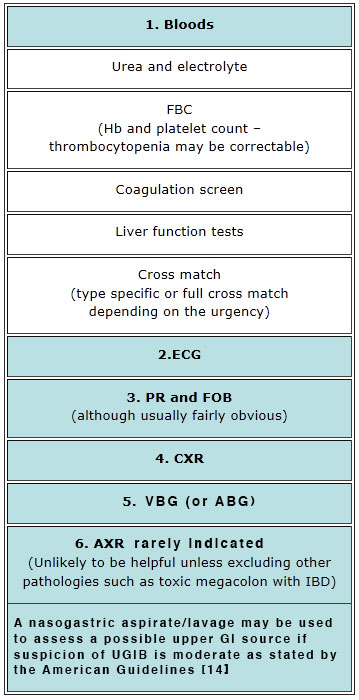 As with most things seen in the emergency department, initial assessment and resuscitation should coincide.

The majority of patients with a lower GI haemorrhage will stop bleeding during initial resuscitation, allowing investigation of the source of bleeding to proceed as an inpatient.

The likelihood of locating the abnormality, the potential complications of the investigation and further treatment options will all need to be considered when deciding which investigation is the most appropriate. 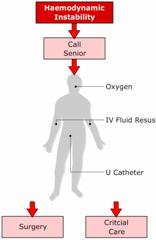 Prompt resuscitation and early involvement of surgical team are vital.

Unlike other clinical conditions the investigation and definitive treatment of lower GI haemorrhage is often carried out at the same time. Options include

Colonoscopy has an established low morbidity and mortality and a yield of 72% to 86% [5].It also allows certain treatments to be carried out at the same time.

Guidelines published by the American Society for Gastroenterology strongly recommend that Colonoscopy should be the initial diagnostic procedure for nearly all patients presenting with acute LGIB. In patients with high-risk clinical features and signs or symptoms of ongoing bleeding, a rapid bowel purge should be initiated following hemodynamic resuscitation and performed within 24 h of patient presentation [14]

A limitation of this investigation, however, is the difficulty in visualising the mucosa during or soon after a bleed (making it difficult to accurately identify the bleeding site).

During colonoscopy, it is possible to perform coagulation to stop the bleeding (thermal contact or epinephrine injection), particularly for AVMs. However, it is vital to consider the risk of perforation when using this treatment modality. Other treatments available at colonoscopy include haemoclips and band ligation [18].

Colonoscopy is the investigation of choice in most patients with lower GI bleeds.

Angiography is thought to be preferable in those with a massive haemorrhage, but success rates in identifying the source of bleeding vary from 40% to 85% depending on the cause of bleeding [19 & 20].

The source of bleeding is identified by visualising extravasation of contrast material into the lumen of the bowel.

Superselective embolisation aims to decrease the arterial blood flow. This reduces pressure to the bleeding site so haemostasis occurs. There is a small risk of ischemia

It is recommended by NCEPOD that Hospitals have a duty of care to provide acute haemorrhage control. Those that do not provide on-site IR should liaise with their regional centre to establish an agreed formalised network. [21]

Angiography is recommended in patients with a massive lower GI haemorrhage or if a colonoscopy proves unsuccessful.

Other investigative options include:

The SIGN guidelines state that all patients with rectal bleeding should undergo proctoscopy. [17]

Unlike in upper GI bleeds where IV vasopressins and proton pump inhibitors have an accepted role in the management of patients; there is little use for medical therapies such as these in patients with lower GI bleeds.

Treat those patients taking warfarin in line with local protocols. Low dose aspirin is usually continued and NSAIDS stopped. Consider if the risk of re-bleeding outweighs need to be on anticoagulant, this may involve a discussion with appropriate specialty. [22]

Most patients have intermittent bleeding or can be controlled with non-surgical therapies; however, a small minority may need to undergo surgery In the national LGIB audit in 2018, only 117/2528 (4.6%) admitted patients underwent surgery. [15]

Surgery acutely for LGIB should be considered if massive bleed, and after other therapeutic options have failed. One should take into consideration the extent and success of prior bleeding control measures, severity and source of bleeding, and the level of comorbid disease. [14]

Ideally, accurate pre-operative localisation of the bleeding site, when possible, is essential to allow segmental resection to be successful or high rates of re-bleeding are likely. When surgery is required before any investigations can be undertaken again it is important to try and diagnose the bleeding point intra-operatively, when this is not possible a subtotal colectomy is often performed.

Surgery acutely for LGIB is rarely required (<5%) and should be considered after other therapeutic options have failed.[15]

These patients must ALL have a digital rectal exam (strong recommendation). [17]