It is easy to be confused by the variable terminology used for tachycardias arising above the ventricles: the term Supraventricular Tachycardias (SVT) could be applied to all such arrhythmias, including atrial fibrillation and flutter. It is often used as an overall label for patients with narrow complex tachycardias who have not yet been fully assessed. In common parlance in the UK though, the term includes all Atrial and Junctional Tachycardias but excludes Atrial Fibrillation.

Narrow complex tachycardias are always supraventricular, as a normal QRS width indicates that conduction is down the Bundle of His in the normal antegrade manner. Sometimes SVT can present as a broad complex tachycardia, if ventricular depolarisation is triggered by antegrade conduction down an accessory pathway, or in the presence of pre-existing bundle branch block.

With only limited experience of emergency medicine, one could be forgiven for thinking that SVT is a no brainer a harmless condition of the young simply requiring a bolus of adenosine then discharge home. This is untrue and several pitfalls await those doctors who combine inexperience with overconfidence.

SVT can occur at all ages and is usually, but not always, well tolerated by the patient. Although in younger patients SVT may cause only a nuisance palpitation and anxiety, rates above 150, and pre-existing cardiac disease or other co-morbidity greatly increase the likelihood of symptoms such as ischaemic chest pain, dizziness, syncope or breathlessness.

Paroxysmal is often used as a prefix and means recurrent episodes 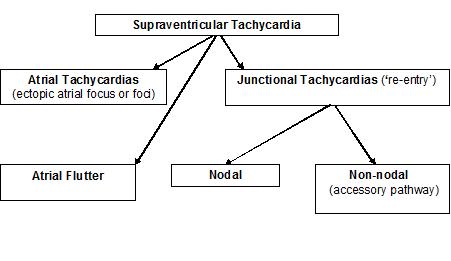 The clinical presentation of patients with SVT is variable and depends on confounding factors such as age and pre-existing cardiovascular state: how much cardiovascular reserve the patient has determines how well it is tolerated.

Typically, patients present with palpitations, cardiac chest pain or tightness, pre-syncopal symptoms such as dizziness, or shortness of breath. Often the onset is abrupt, may terminate spontaneously and episodes are recurrent (paroxysmal). Patients sometimes do not seek medical help, particularly younger patients.

Each of the three main types of SVT will be discussed in turn.

This is a tachycardia (rate over 100, usually 150-250) arising from atrial tissue other than the sinoatrial node an ectopic pacemaker, or rarely, multiple pacemaker sites (see Figure 2).

P waves are present on the ECG but their shape is abnormal, depending on the site of origin of the ectopic pacemaker. Most commonly, this is a benign and short-lived paroxysmal condition of the elderly. A more prolonged form may occur in children and young adults Incessant Ectopic Atrial Tachycardia: undiagnosed, it may progress to a dilated cardiomyopathy. 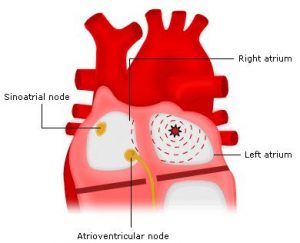 Atrial tachycardia may be seen with AV block in digoxin toxicity (see Figure 3).

Figure 3: Atrial Tachycardia with AV Block. Note the second P wave at the end of the ST/T wave, easily mistaken for an upright T wave.

Junctional tachycardias are those arising from the junction between the atria and ventricles, including the AV node, and are due to re-entry circuits.

A re-entry circuit consists of two pathways the normal fast conducting pathway, plus another area of conducting tissue allowing impulses to pass only at a slower rate the slow pathway.

Typically the slow pathway has a shorter refractory period. Normally impulses from the atria travel down both but those from the slower pathway meet refractory tissue and stop. 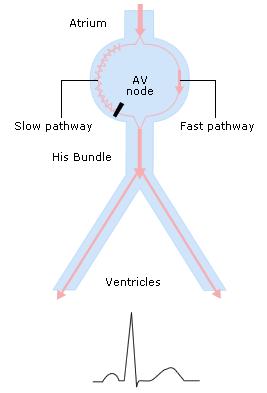 The fast and slow pathways are anatomically distinct within the AV node but rejoin to create the Bundle of His for onward transmission to the ventricles.

Transmission is usually antegrade in the slow pathway and retrograde in the fast pathway as described under re-entry circuits and is known as slow-fast (see Figure 5). 10% patients have fast-slow circuits: this may be identified on the ECG as a long RP interval. 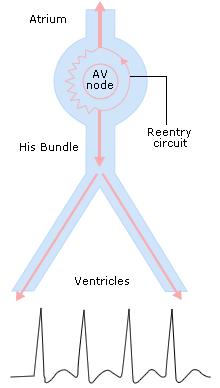 As ventricular depolarisation is always via the Bundle of His, the QRS is always narrow unless pre-existing bundle branch block is present.

In nodal re-entry tachycardias, atrial (retrograde) and ventricular depolarisation is simultaneous so the p waves are buried in the QRS and hard to identify look for inverted p waves in inferior leads 11, 111, AVF, sometimes causing a pseudo S wave.

Theseare due to an aberrant pathway linking atrium and ventricle which rarely can be multiple. The best known clinical syndrome is Wolff-Parkinson-White Syndrome (WPW) where the aberrant pathway is known as the Bundle of Kent. 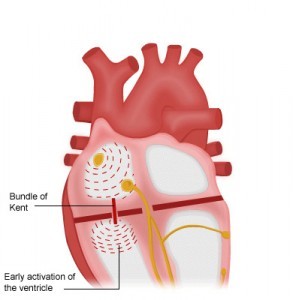 In sinus rhythm, conduction is usually via both pathways: (i) rapid transmission through the accessory pathway causes ventricular pre-excitation although (ii) most ventricular depolarisation occurs normally via the Bundle of His. These factors account for the short PR interval, slurred upstroke of the R wave known as a delta wave, and QRS abnormalities of WPW in sinus rhythm (see Figure 8).

Sometimes the accessory pathway can only conduct retrogradely, in which case normal AV conduction occurs through the AV node and the ECG is normal in sinus rhythm. 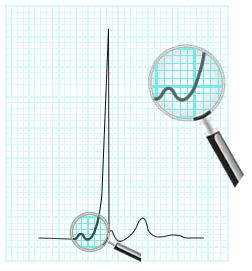 Figure 8: The ECG Complex in WPW when in sinus rhythm

There are two patterns, orthodromic and antidromic, referring to the direction of flow in the accessory pathway (see Figure 9). 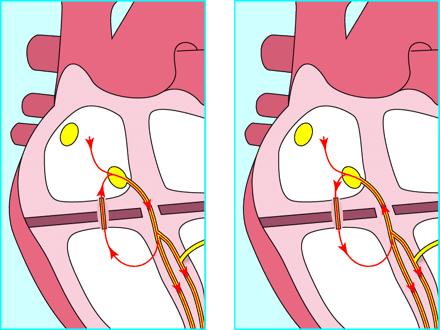 (i) Orthodromic Re-entry tachycardia occurs when a premature atrial impulse is transmitted via the AV antegradely to the ventricles, then retrogradely back up the accessory pathway, depolarising the atria then passing back via the AV node and down the Bundle of His again antegradely, establishing a re-entry circuit.

P waves will therefore be present, but inverted and will follow the QRS, and the delta wave disappears (see figure 10).

(ii) Antidromic re-entry tachycardia is much less common, occurring in 10% of cases of WPW.

Here the accessory pathway conduction is antegrade, delivering the impulse to non-specialised tissue in the right ventricle consequently ventricular depolarisation spreads from this point leading to a widened and abnormal QRS (see figure 10).

Retrograde conduction through the AV node leads to atrial depolarisation and consequently the P waves will be buried in the wide and abnormal shape QRS this may be indistinguishable from ventricular tachycardia unless a previous ECG is available. One clue is that the re-entry tachycardia will be exactly regular.

In sinus rhythm, the ECG may be completely normal or there may be a short PR interval, slurred upstroke of the R wave known as a delta wave, and right (type A) or left (type B) bundle branch block pattern QRS abnormalities (see Figure 11).

During episodes of re-entry tachycardia: 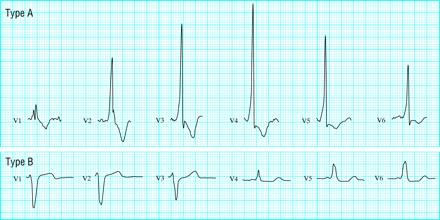 Measures to increase AV block may terminate the arrhythmia by blocking the re-entry circuit:

There is a very important pitfall to be aware of when assessing and treating patients with WPW and a tachycardia. It is vital that you check the arrhythmia is not atrial fibrillation. This is because the accessory pathway can potentially transmit fibrillation waves very rapidly (> 300 bpm) if the AV node is blocked. This can lead to a very rapid ventricular rate (250-300 per minute) and even Ventricular Fibrillation (see Figure 12).

Drugs which block the AV node (including adenosine, beta blockers, verapamil) must not, therefore, be used in patients with AF who are suspected of having an accessory pathway (eg WPW). 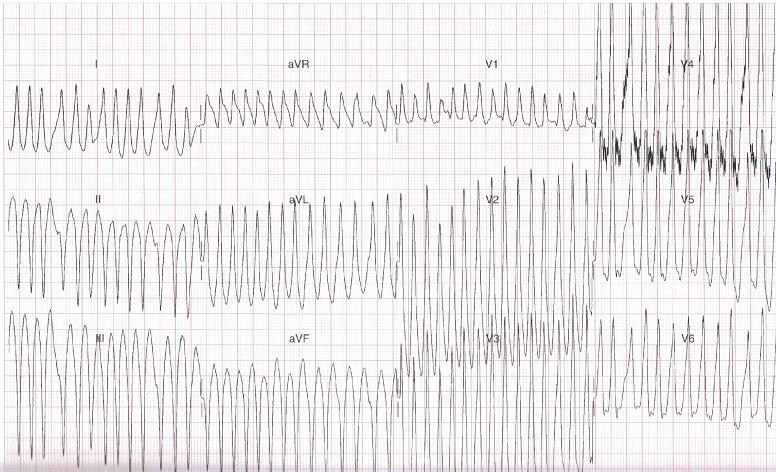 Figure 12: “pre-excited” Atrial Fibrillation in a patient with an accessory pathway

Atrial Flutter is a common dysrhythmia in older patients and has similar causes to Atrial Fibrillation. A rare cause is digoxin toxicity and this should always be considered before treatment.

Atrial Flutter is a form of re-entry tachycardia where the circuit is almost always confined to the right atrium: rare left atrial cases have been reported.

Type 1 or Typical atrial flutter will have a rate of around 300/ min (250-350/min) and most commonly produces a negative sawtooth appearance in inferior leads II, III and aVF (see Figure 14). Reverse Typical Flutter produces a positive sawtooth in the inferior leads at around the same rate, and is due to the electrical impulses passing round the re-entry circuit in the reverse direction.

The atrial rate can be slowed by Class 1A, 1C drugs and amiodarone. Patients already taking these drugs may present with rates of around 200, and sometimes the AV node then allows 1:1 transmission, resulting in a ventricular rate of 200 or so.

Classic sawtooth Flutter waves may be seen best in 11, 111, AVF and V1 (see Figure 13). Sometimes the sawtooth morphology is absent and diagnosis depends on identifying flutter waves at a rate usually around 300 (variable, depending on factors above) or having a high index of suspicion for atrial flutter when faced with an ECG with a ventricular rate of half (ie. 150/min) of this (ie. 2:1 block).

Adenosine can be used diagnostically where there is doubt, in order to temporarily block the AV node and provide a few seconds of rhythm strip devoid of ventricular complexes. The presence of flutter waves is then obvious.

The ventricular rate seen in patients with Flutter is dependent on the degree of AV nodal block: normally the AV node cannot transmit impulses at 300/min so only alternate impulses reach the ventricles, giving a rate of 150/min. This is called Atrial Flutter with 2:1 block and is the commonest ventricular response (see Figure 15). 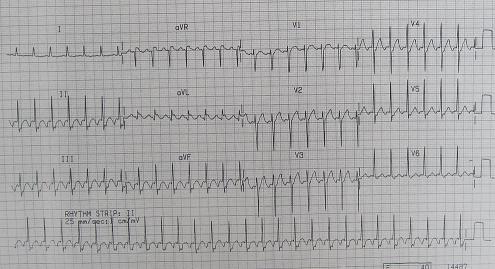 Mortality and morbidity in Atrial Flutter are related to:

Both of these issues need to be considered when intervention for Atrial Flutter is considered.

Treatment of Atrial Flutter is broadly the same as for Atrial Fibrillation, though the condition is more sensitive to DC shock and less so to chemical cardioversion.
The urgency and aims of treatment depend on symptoms, which are usually rate-related.

The various therapeutic options include:

The patient with recent onset flutter and a rapid ventricular rate may be unstable or compromised hypotensive, suffering ischaemic pain or in overt pulmonary oedema. These patients require emergency synchronised DC cardioversion. 25J may be sufficient though 50-100J is more reliably effective. Sometimes the first shock converts the rhythm to atrial fibrillation, requiring further shocks to achieve sinus rhythm.

Chemical cardioversion can be achieved best with class III anti-arrhythmic drugs such as amiodarone, stall (which has class III action), and flecainide (class Ic) are also used, typically on the advice of a cardiologist.

Rate control may be achieved with amiodarone (although this may well also result in cardioversion), beta blockers or calcium channel blockers (eg. verapamil or diltiazem).

Antiarrhythmic drugs maintain sinus rhythm in only 50-60% of patients. Radiofrequency catheter ablation is successful in more than 90% of cases, interrupting the re-entrant circuit in the right atrium and avoiding the long-term toxicity observed with antiarrhythmic drugs.

There are no studies of the effect of anticoagulation on embolic risk in atrial flutter. There is a consensus that since the risk of embolic events seems to be similar to that of atrial fibrillation, anticoagulation should be used similarly ie if the arrhythmia has been present for more than 48 hours then anticoagulate for 4 weeks prior to cardioversion. Long term anticoagulation is rarely required in Flutter as the condition is permanently cured by radiocatheter ablation or deteriorates into atrial fibrillation.

PREVIOUSTrek Tragedy!! Review on Lyme Disease
BACK TO POST
NEXTDisorders of Potassium Balance