This 32 year old has fallen off a ladder, and has hip pain. Their x-rays show a pubic ramus fracture, they’re able to mobilise, so can I send them home?
If your knowledge of pelvic fractures extends as far as “it’s broken, refer orthopaedics”, or “it’s a pubic ramus fracture in an elderly patient, refer medics”, then this blog post is for you. We all work in systems where trauma units are great at managing trauma, but sometimes need help from the major trauma centres, where specialists congregate to manage these things. So which patients do you need to talk to the MTC about?

“Among awake, alert patients, painless straight leg raise can exclude pelvic fractures.” 100% sensitivity in this study (can rule out fracture) and 100% negative predictive value (the result of the test is very reliable) https://t.co/yesj5MTQo3 #FOAMems #paramedic

Firstly, if it’s not broken, the MTC won’t need to know about it. But if it is broken… 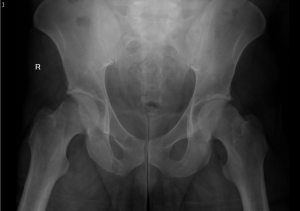 A few things are obvious:
1. Pelvic fractures are commonly associated with other big injuries and blood loss. If there is any suggestion of either of these being present, please discuss with the major trauma centre.
2. Multiple injuries requiring intervention e.g. the patient with a closed femur fracture and a pelvic injury. You might quite fancy nailing the femur and then referring on  for treatment of the pelvis. Or the patient with a pelvic injury and multiple facial injuries requiring operative intervention. We would say that the best thing for the patient is for both injuries to be treated in the same place. That is NOT to say that an MTC would nail the femur so much better than a TU would, but when you have neighbouring (contiguous) injuries like that, you need to be mindful of what operation EACH fracture is going to receive so as operation B might be dependent on operation A.

General Management
If you DO decide to admit a patient with a pelvic fracture to ANY hospital, you should start chemical prophylaxis (we use clexane). You don’t have to wait 24 hours+ to start clexane. If the patient is stable, it is safe to start LMWH within 6-8 hours of injury, regardless of age. Our advice is to continue treatment for 12 weeks after injury, or until the patient is fully weight bearing on the affected side. Give compression pumps while they’re holed up in bed – then just TEDS to mobilize.

Pelvis Binders: Pelvic binders are not orthopaedic devices, they are haemostatic devices. They hold the pelvis still whilst a clot forms. Therefore, the decision to remove them is not an orthopaedic one. It lies with those managing the shock – the team leader +/- trauma surgeon. The configuration of the pelvic fracture (displaced, undisplaced, LC, APC, VS, whatever) is also totally irrelevant to whether it stays on or not. You can happily bleed to death from any flavour of broken pelvis/acetabulum. So, again, the orthopod has nothing to advise upon in the acute setting, regarding the binder. If there has been any sniff of haemodynamic instability, then the binder stays on until the team leader feels that the risk of going back into shock/dislodging a clot has gone – and this often means the binder is removed in theatre.
Don’t forget to give the patient analgesia, with pre and post pain scores!

Acetabular Fractures
1. The acetabular fracture with ‘central dislocation’ / medialisation of the femoral head, like a traumatic protrusion, are usually associated both column fractures or anterior column posterior hemi-transverse fractures.
We’ve picked a couple of fairly florid examples here but you get the point. The femoral head is clearly subluxed medially. These pretty much always get some form of operation, be it internal fixation or total hip replacement or both. These need sending to the MTC, even if they’ve got no other injuries and they’re completely stable. In most hospitals, this would be accepted by the MTC Consultant. Remember to share over any imaging that’s been done and complete your local pelvis referral document if possible. 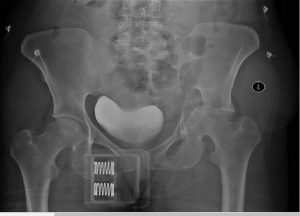 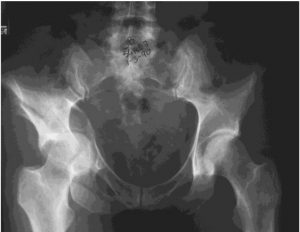 2. The acetabular fracture that has a posterior fracture +/- dislocation.
This is seen on the AP as the head sitting slightly superior and often a little lateral too. They’re often dislocated when they come in and if so, it’s very reasonable to have a single attempt at pulling it back into joint in the ED with some sedation.

These are usually:
Posterior wall or Posterior wall/posterior column or Transverse/posterior wall
The two we’ve chosen below are both clearly dislocated but sometimes they pop back in spontaneously at the time of injury, so they arrive reduced. The key thing is to check whether they’ve got associated fractures. That’s enough for a transfer. A hip dislocation, with an associated fracture that’s visible on the AP pelvis – just send it to your MTC direct. Importantly with these, you need to do a neurovascular exam before AND after any intervention that you do. However, you have to know when (and if) any sciatic nerve injury took place. 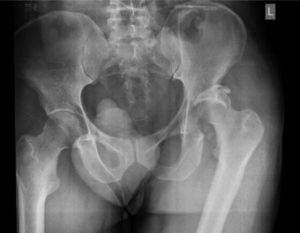 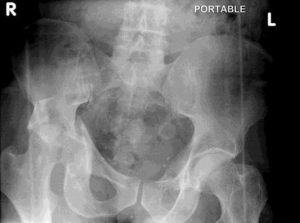 If you can’t see a fracture on the plain film, then it’s probably worth getting a CT before sending because sometimes there IS no fracture (or the fracture is tiny and insignificant), in which case it doesn’t need surgery. Following CT, send for specialist pelvis input directly if the scan shows a significant posterior wall fragment (more than 25% of the posterior half of the joint – see picture below) or if there are any other fracture lines going through the columns. These we normally stabilise, even if they’re undisplaced.
To give you an idea, below is a posterior wall fracture, axial CT. This is showing about 20-25% PW involvement and we’d almost certainly be fixing it, even though it looks pretty undisplaced. You probably wouldn’t see this on the plain AP film. 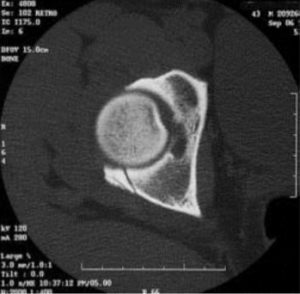 3. Symphyseal diastasis
These can arise either from AP compression OR (less commonly) lateral compression. The bottom line with these is that if you see that the symphysis is widened AT ALL, then it’s almost certainly unstable and we’re going to fix it, so speak to your local MTC. The problem with these is that the x-rays are often taken in a binder, so the true magnitude of the injury is under-appreciated by the x-rays.
Below are two such injuries. You might think that the one on the right seems only widened a bit, but if you were to screen it (not advising that you do!), you’d almost certainly see it gape right open, so it represents an unstable injury and we’d be fixing it. So, any widening – speak to your MTC.

4. The pelvic ring injury – usually a lateral compression or vertical shear.
These are the tricky ones because although you can see the pubic rami fractures on the AP pelvic view (often extending into the bottom of the acetabulum – called ‘root of rami fractures’), you often can’t see what’s going on at the back (the sacrum). The image below is classic of this – I can see the rami are broken but not much else. So what now? 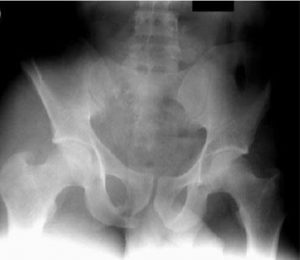 Effectively there are two scenarios here:
a. There is obvious loss of symmetry on the AP pelvis.
In this scenario, just send direct to your local MTC. By all means get a CT, but don’t allow it to delay transfer. This is getting an operation whether the CT happens at the trauma unit or MTC. 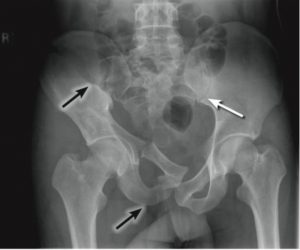 b. You’re not sure whether it’s displaced or just rotated a bit – this is by far the most common scenario. In this scenario, my advice is to get a CT in the ED and then act upon it before admitting the patient:
1. SI joint(s) is/are widened – send direct to MTC, do not admit locally
2. Pubic symphysis seems widened (binder on or not) – as above, just send to MTC
3. Sacrum is comminuted all the way through, from the front and exiting out the back (below left) or it is fractured bilaterally (below right) – as above, just send it to your local MTC.

4. Sacrum is buckled in at the front but the fracture doesn’t seem to exit out posteriorly (see below) – admit the patient locally, start clexane and speak to your local MTC. They’ll probably review the images in next day’s trauma meeting, and give you further advice later. This is the classic lateral compression type-I (LC-1) and is by far the most common pelvic fracture that you will see.
Fractures such as this are treated with immediate mobilization and weight bearing as tolerated on both sides. We get repeat x-rays at 1 week (AP, Inlet and Outlet views) to make sure there has been no displacement. Usually no further follow up is required. 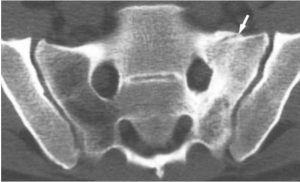 Summary:
In effect we are asking that you all have a fairly low threshold for directly transferring pelvic fractures to your MTC – other than stable LC-1 injuries, which can be mobilized freely. The advice above is hopefully a useful guideline.
We do accept that there will be a few patients that you decide to send directly over to us who subsequently don’t get surgery. We realize you are not all pelvic experts and so this is something that will happen. But it is for the greater good of the more injured patients. From the point of view of our MTC, you all have our assurance that there will be no recriminations or moaning from our end, although we will feedback for purely educational purposes – and I hope your MTC feels the same.

Foot injuries are common and because they affect mobility, they can have significant effects on a patient's life and so are important.

The assessment of abdominal trauma is notoriously difficult. Serious intra-abdominal injuries may initially appear to be innocuous and localisation of symptoms is variable.