The ED plays a crucial role in raising the alarm for non-accidental injuries. Frequently, we may be the first port-of call for a child who has gone through the unthinkable, and it is our role to think about the possibility in this vulnerable group.

An abused child who is returned to an unsafe home environment is at 50 percent risk for further injury and 10 percent risk of death over the next five years.

However, early identification of, and intervention in, households where children have been abused can lower the recurrence rate to less than 10 per cent.

Child abuse is subdivided into different forms, as outlined by the WHO definition:

“All forms of physical and/or emotional ill-treatment, sexual abuse, neglect or negligent treatment or commercial or other exploitation, resulting in actual or potential harm to the child’s health, survival, development or dignity”.

We should be all ears in the history to think of inconsistent findings, namely:

When examining the child take particular attention to:

It is common for children to have many bruises, especially over bony surfaces like shins and chins. However, these bruises should make you think of non-accidental injury:

Burns can also be accidental, but 15-25% are thought to be the result of abuse, so pay particular attention to patterns that mimic objects, especially hot plates, hair straightening irons, steam irons, cigarettes etc. Remember that although children do like to explore, they won’t touch a hot object for long.

Immersion burns on buttocks, hands or feet can occur if the child is lowered into hot water accidentally or non-accidentally. Look out for the absence of splashes, which indicates the child was unable to thrash around.

There is much on-going research on distinguishing non-accidental fractures from accidental ones, and this week Kevin Borg, an ex-colleague of mine, published an excellent review article in the Education and Practise Edition of the Archives of Disease in Childhood, which proposed the guidance below on when to order a skeletal survey in children younger than 24 months. 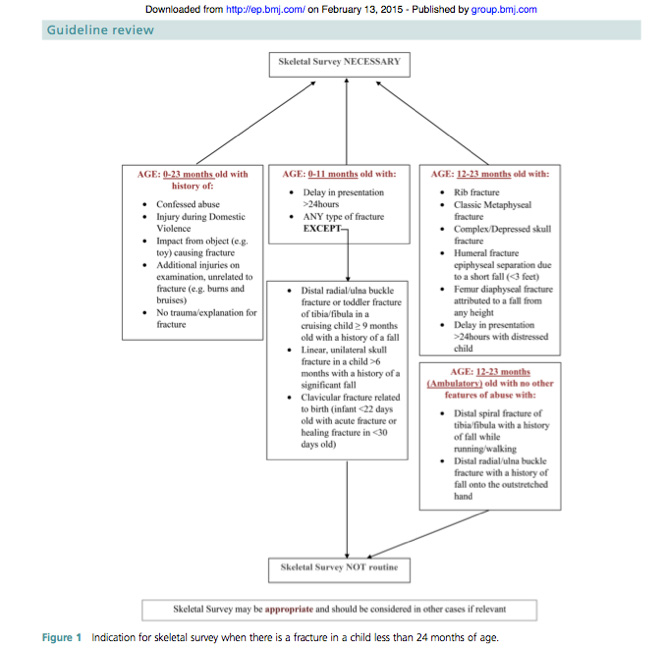 Another manifestation of abuse in the most common in the first year of life is abusive head injury and may happen by shaking. The perpetrator is usually male.

A higher force is needed to produce retinal haemorrhages than subdural haemorrhage therefore look for SDH in a child with retinal haemorrhages. The history given by the parents will not necessarily mention head injury, so it is important to think of this in a child with a decreased GCS, profoundly unstable vital signs and an altered neuro exam. Look also for facial bruises. Other injuries are also common with this type of abuse, including rib fractures, abdominal injury and cervical spine fractures.

Sexual abuse is a topic on its own, and while its presentation may be vast and non-specific, victims may also be brought to the department specifically for evaluation of possible sexual abuse.

Below are some presentations of this form of abuse:

Emotional abuse occurs when an adult harms a child’s development by repeatedly treating and speaking to a child in ways that damage the child’s ability to feel and express their feelings. Signs include:

It encompasses both actual and potential harm and may be picked up when a child is brought to the ED.

We have had some terrible cases where I work, but the more horrendous the case, the more clear-cut the diagnosis. However, it may be less obvious with milder cases. That’s why it is important to look at the child in front of you as a whole being, not just the simple (and likely accidental) injury they may have been brought in for. 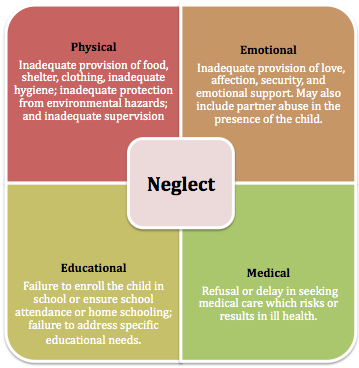 On a final note, don’t go pointing any fingers in the emergency department, but be honest and open with parents about investigation (except in Munchausen syndrome by proxy). Remember things may not always be what they initially seem, and other causes need excluding!

Nikki Abela is a CT3 Emergency Medicine trainee in Mersey. She has a special interest in Paediatric Emergency Medicine and is studying for a Masters Degree in PEM with the University of Edinburgh. Some of the work published here is adapted from her studies.

The presentation of a child to the emergency department (ED) by concerned parents after ingestion of a potential toxin is a frequent occurrence.