Atrial Fibrillation affects a substantial number of patients. It thought to effect up to 3% of the population and the incidence increases with age and co-morbidities such as hypertension, heart failure, coronary artery disease, valvular heart disease, obesity, diabetes
mellitus, and chronic kidney disease. 1

The greatest morbidity and mortality associated with AF arises from the thromboembolic sequelae however significance of the dysrhythmia is highlighted by the associated odds ratios for death. In men with AF in comparison to non AF controls the Odds Ratio for death is 1.5 and in women 1.9. Most of the excess mortality occurs early after the diagnosis of AF.

The management of atrial fibrillation is seldom entirely straightforward; the rate versus rhythm debate and the efficacy and safety of anticoagulation are just two examples of key decisions the clinician and patient must face. This situation is often compounded in patients presenting with AF to the Emergency Department as there may be uncertainty regarding onset time and relevance to the presenting complaint.

The p waves which represent depolarisation of the atria, are absent during atrial fibrillation and the heart rhythm is irregularly irregular.

The currently recognised classification of AF relates to the duration and persistence of the AF:

Many of the patients who present to the Emergency Department in AF have had the condition diagnosed previously and been commenced on appropriate treatment, ie rate or rhythm control. However some will not previously been known to be in AF and will therefore require a full assessment with a view to commencing therapy.

(i) Assessment of time of rhythm onset

The most important ED determination in AF is the probable duration of the dysrhythmia. It is important as it allows the clinician to determine whether a rate or rhythm control strategy is in the best interest.

A safe time frame for cardioversion is 48 hrs from onset

Some patients present with what has often been called Fast AF. This is a misnomer since all patients in AF have chaotic atrial electrical activity with no discernible pattern, so the description fast which implies a contradistinction to slow is incorrect. The correct description is AF with a fast /slow / controlled ventricular response.

There are many illnesses which may precipitate new atrial fibrillation or worsen the cardiovascular consequences of pre-existing AF.

These secondary causes can be remembered by the pneumonic

Where there are identifiable precipitants of atrial fibrillation they should be treated. There has been shown to be 6 fold increase in adverse event rate when treating AF secondary to an acute underlying medical illness in the emergency department. 4 The AF usually improves or resolves if treatment is directed at the precipitant.

Most patients with AF are cardiovascularly stable. Two uncommon groups of patients may become unstable as a consequence of the onset of AF.

In both groups restoration of sinus rhythm assumes increased importance and prompt cardioversion may be indicated. However for patients in the second group rate reduction may be sufficient.

The greatest morbidity and mortality arising from AF is caused by thromboembolic sequelae. It follows that assessment and reduction of this risk is the single most important aspect of the treatment of AF.

NICE recommends treatment must be decided on an individual basis: 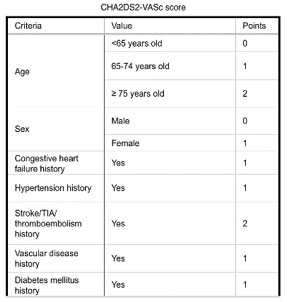 Bleeding risk should be assessed using the HAS-Bled Score (Fig 2), using a score of greater than 2 as a relative contraindication to anticoagulation. 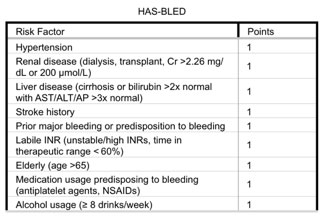 When deciding treatment the expected stroke reduction, bleeding risk, and patient preference should be considered.

The primary pathological change seen in atrial fibrillation is progressive atrial fibrosis. This fibrosis is usually associated with dilation of the atria and can occur as a result of a number of mechanisms including valvular and ischaemic heart disease. As a result of the dilation and fibrosis the atria undergo physical and electrical remodeling. The longer AF is present the greater and more irreversible these changes become.

There are two main explanations thought to contribute to the prothombotic state experienced in patients with AF.

1. Structural and functional changes in the atrial myocardium along with stasis of blood especially in the Left atrial appendage allow an environment in which throbus can form.

2. Damage to the myocardium , even seen with short episodes of AF cause expression of prothrombotic factors on the atrial endothelial surface. This along with activation of platelets and inflammatory cells leads to a clot formation.1

This can explain why even those presenting with paroxysmal AF or a brief episode should be considered for stroke risk assessment.

All patients with suspected AF must undergo a physical examination, 12 lead ECG and a blood sample sent for routine haematological and biochemical analysis (electrolytes and thyroid function are important considerations)

The hall-mark feature of the ECG of a patient in AF is the presence of an irregularly irregular rhythm as shown on the ECG in Figure 3. 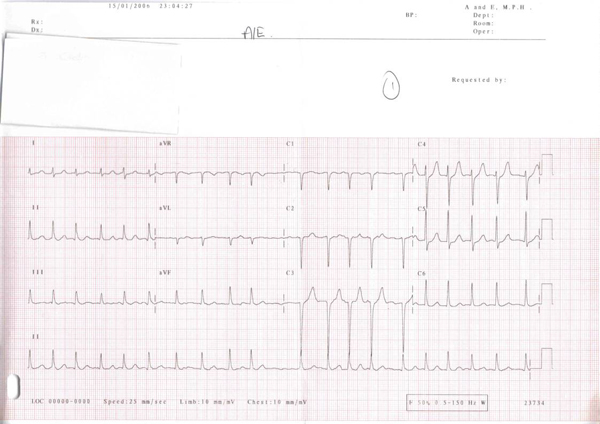 The key features are an atrial rate in excess of 100bpm and at least 3 morphologically different non-sinus p waves in the same ECG lead.

The main goals of treatment of atrial fibrillation are to minimise circulatory instability or insufficiency and to prevent stroke.

Circulatory instability or insufficiency are normally managed by either a rate or rhythm control strategy. In an emergency, when circulatory collapse is imminent immediate cardioversion may be indicated.

In the ED the approach to the patient in AF is determined primarily by the duration of the rhythm. In patients in whom the time of AF onset can be determined to be within 48hrs of presentation restoration of sinus rhythm is both safe and desirable.

Consider either pharmacological or electrical cardioversion depending on clinical circumstances and resources.

Unless the patient is unconscious safe sedation/GA should be undertaken as per local protocol and a starting voltage of 120-150J should be delivered, the energy can be increased in increments if this fails.56

Flecainide has the highest success rate with respect to restoration of sinus rhythm and is significantly quicker in onset than amiodarone, however it is contraindicated in patients with ischaemic or structural heart disease.6

After 48hrs there is ample evidence that restoration of sinus rhythm risks dislodging thrombi from the left atrial appendage with the consequent risk of thromboembolic events including stroke.

In patients presenting after 48 hours of symptom onset or where there is doubt as to when the AF began the ED approach is limited to determining the stroke risk and controlling the ventricular rate.

The management for these patients in the emergency department consists of rate control and anticoagulation dependant on stroke risk assessment.

A Standard B-blocker or rate limiting calcium channel blocker should be used with a target heart rate of less than 110bpm. 7

Rhythm control should be considered in all patients with persistent AF in whom there are no contra-indications. In most circumstances relevant to the ED this will require commencement of anticoagulation and referral to cardiology (often through the patients GP) for an elective interval cardioversion after 3 weeks of anticoagulation. During this interval it may be necessary to control the ventricular rate.

Although counterintuitive, for many patients restoring sinus rhythm has not been shown to provide morbidity or mortality benefits.

NICE recommends rate control as the first-line strategy to people with atrial fibrillation, except in people:

The choice of anticoagulant, if deemed necessary, will be locally decided but Warfarin is being replaced nationally by the use of NOACs for the majority of patients.

Rarely but importantly patients may present with haemodynamic compromise secondary to AF. Such instability due to AF rarely occurs unless the ventricular rate remains above 150 bpm for prolonged periods. It may be associated with hypotension or ischaemic chest pain. In such cases unless the AF is known to be long standing DC cardioversion is the safest and most effective treatment option. Where the AF is longstanding the choice of agent will be governed by the presenting features. Where the main feature is ischaemic (presumably rate related) chest pain a B-blocker is the most rational choice, where the main feature is hypotension a B blocker is contraindicated and therefore amiodarone would be a more rational choice.

An algorithm summarising the treatment of AF in the ED is shown below. 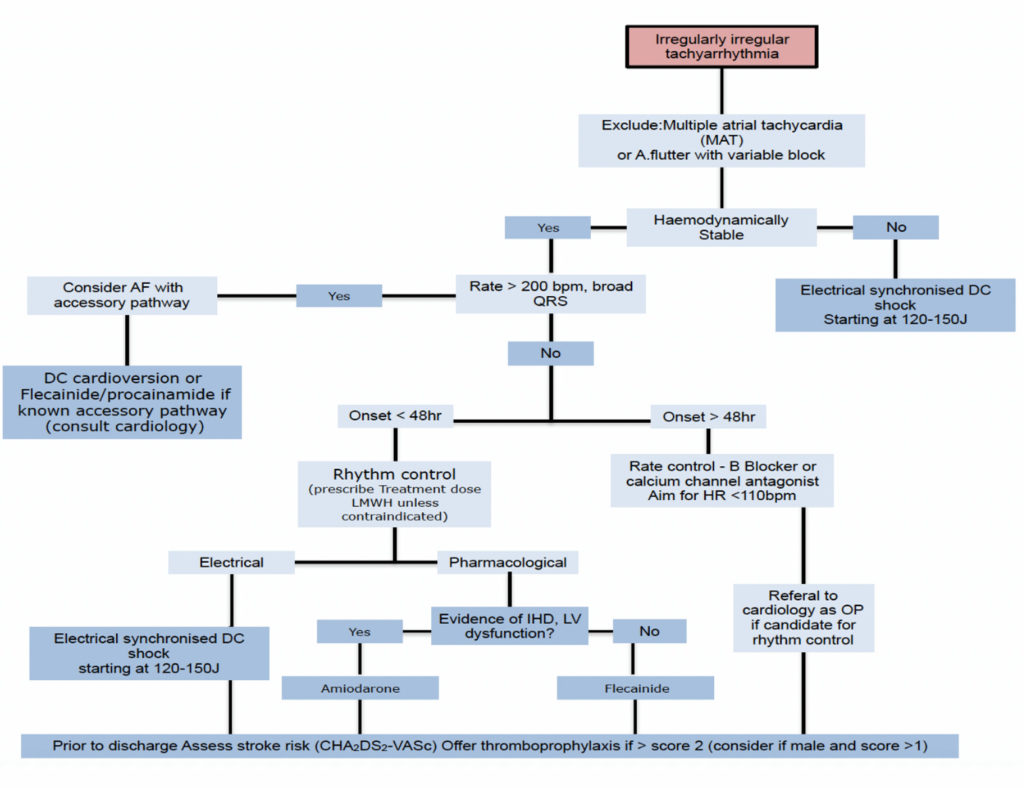